Recently occasionally while driving, the brake paddle felt soft and I can floor it with ease with no braking. Then if I try a few more times , it became normal again. This happened intermittently. There are no brake bluid leak anywhere and the reservoirs are full. Any advise as to the cause of this and how to start trouble shooting will be greatly appreciated
.

If no leaks, it could be an internal leak in the master cylinders.

You are not losing fluid out of the containers?

Certainly a thorough bleed of the hydraulics should occur before you pass judgement on the components - but it may be time to rebuild/replace the master &/or servo.

A similar thing happened on my car, and a couple bleeding didn’t seem to resolve it. The fluid level never dropped. The brakes would be fine for an hour or so into a drive then go away, and then they’d be fine next time I’d drive it. It only happened on slightly longer drives, but never with short jaunts.

Working with a knowledgeable shop, we tried everything including new master, a couple different flushes with different brands of fluid, and several bleeding. The only other thing we could think of was that heat from the manifolds might be boiling any water in the fluid and creating bubbles which were absorbed back in the fluid when things cooled down. A few months after my car was built, Jaguar added the lower heat shield protecting the servo cylinder, so apparently Jaguar discovered there was a heat issue.

We added that shield to my car and the problem has never happened again. I never fully bought into the theory of why this was happening as the fluid was replaced, but everything else was tried without success and the shield seemed to fix it. Eighteen months later all is still fine.

can air in the braking system cause INTERMITTENT brake failure? should I replace both front and rear wheels master cylinders ? I cannot even find the rear brake bleeding nipple.
William

No, but water can. What happens is that when the brakes become hot, trapped water vaporizes and you lose braking. Once the water cools and condenses, braking returns. Your first step is to flush out every drop of old fluid and refill with fluid from a fresh bottle.

Come to think of it, it never happens when the engine is cold in the garage. so it could not be a master cylinder internal leak. It may be deteriorated brake fluid vaporization. I shall try flushing with fresh dot 4 and see if that solves the problem. Can anyone tell me where the rear wheel bleeder is?

Regardless, you have a major problem with your brakes. This is a life threatening problem. Yours, or someone else’s. Or someone’s child.

You should not drive the car at all.

My personal approach would be to remove all brake components, have them restored or replaced, and ensure that the brakes work prior to driving the car again.

If this is not something that you are confident you can do yourself, then get it done professionally. Your life, or that of someone else, depends on it.

In my view the cause is likely to be hydraulic but trying to diagnose it based on the opinions of a group of random people on an internet forum is fraught with danger.

This is a life threatening problem.

Not to be shrill but I would have to agree with Andrew. If you are inexperienced with working on brakes, this is not a good place to start your education. Lives are at stake, not to mention your investment in a fairly significant car.

The rear brake bleed screws were designed by a decendant of the Marquis de Sade. They are at the top of the caliper pistons, just adjacent to the differential housing. There will probably be dried blood stains from the last person who did the job.

As others have said, the symptoms you describe seem to be a classic example of water in the brake fluid boiling to steam. Random. Potentially deadly.

Now would also be a good time to install remote bleeders on the rear brakes.

How do you do the heat shield for the master cylinders without ruining the concourse status of this 1961 xke? What material did you use?

I decided having brakes that didn’t suddenly disappear on me was more important than worrying about a possible point deduction. And from my experience at a few Concours, the judges wouldn’t have had a clue about it anyway.

The shield was whatever supplied by the usuals. It looks similar to the upper shield protecting the reservoirs.

As I mentioned, I still sort of have a hard time believing that the servo would get hot enough to cause the brake loss. Putting my hand on the servo and master cylinders, it definitely felt fairly warm, but it wasn’t blisteringly hot. But we went through every other thing in the system without success, and once the shield was installed it never happened again.

I guess the easy answer is, if your car was not fitted with a heat shield, then if you add one, you have compromised the originality of the car to some degree. I guess that is your call.

Did your car have a heat shield? First, what is is called? Per the SPC it is “Shield assembly, protecting reservoirs from exhaust heat”. SPC page 134 and plate 29 inserted below. You can scan the car numbers and see where your car resides. 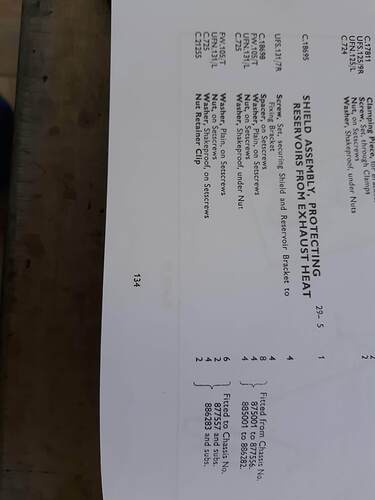 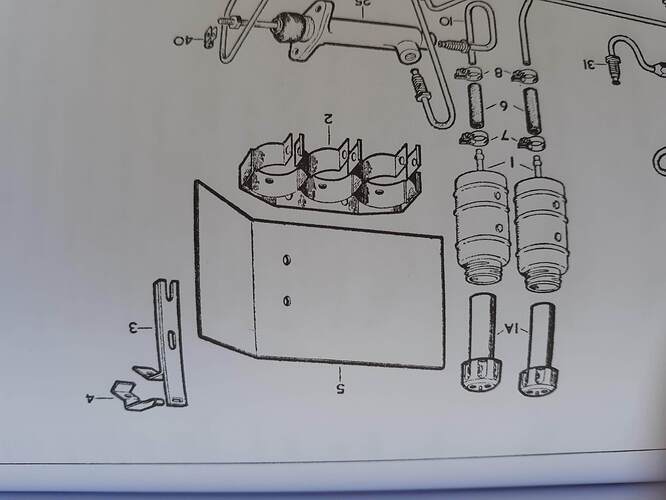 Sorry. My camera is not cooperating but you can see the essence of what you need, I hope.

Where do you get them?
The usuals sell a reasonable facsimile, subtituting something for the original asbestos that they were fabricated from.

Reviewing Haddock/Mueller, I find no reference to the shield assembly in the index, looking under various terms. On pages 222, 223, 224 every picture of brake fluid bottles shows a shield in the background.

That pretty much exhausts my ideas regarding whether your car had one or not. Maybe Mike Frank has more details, although obviously having your car number would be important.

To be clear, this shield was never fitting to the 3.8 and came into the 4.2 a bit early in that run, around March ‘65 production if I recall correctly, so it is absolutely incorrect for a Concours 3.8. I would exhaust (no pun intended) all other options first, starting with a complete flush and a well-bled system with new fluid, then investigate the servo and the master. If all of those check out ok and the problem still persists but you’re not losing any fluid anywhere (as was the case with my car), then as a last resort the heat shield might help.

I decided having brakes that didn’t suddenly disappear on me was more important than worrying about a possible point deduction.

Just thinking that should cause you a 20-point deduction!

In case it helps here is photo looking down on the upper and lower heat shield on my '68. 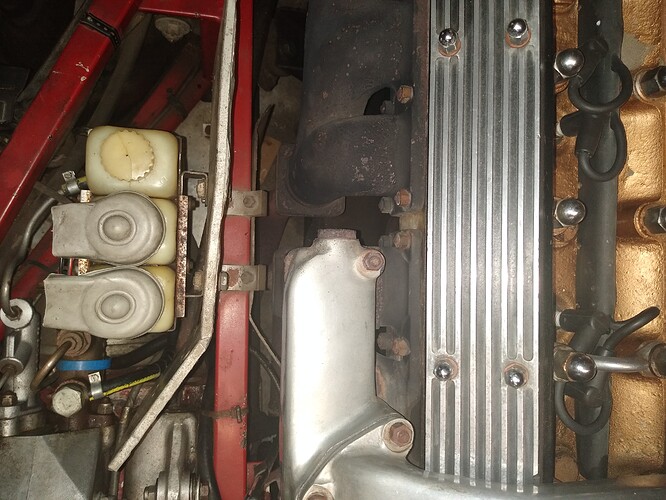 Well, Jeff brings up an important point, albeit obliquely. The 3.8 brake system does not have a servo, mounted down low, near the exhaust pipes. So maybe that line of thinking, about the servo getting hot, is moot.

Hi I agree with Paul on this,a good indicator of a master cylinder problem from back in the day was to apply steady pressure to the brake pedal for a few minutes.If the pedal slowly sinks you have a problem with one or both master cylinders.
Regards Gerry 62 Ots.