E-Type S2 misfiring at full throttle until engine is hot

I drive my S2 hard and fast. That is why I bought it. It is now misfiring at full throttle after about 3000 to 3500 rpm. Once I have driven it a few miles, 10 or so, and the engine is good and hot, the misfire goes away and then runs as smooth as can be up to whatever rpm I am comfortable in pushing it. Never got up the nerve yet to run up to red line yet but have been close with no problem How would engine temp. and running it a few miles smooth it out?

These cars have a lot to warm up iron, steel, aluminum, coolant & oil. How long do you leave the choke on (maybe half choke)? I’m all about driving my car hard but I only do it after the oil is warmed up. If you don’t go to the red line how do you know when to shift

What needles are you running in your carburetors? Are you running ethanol free gas or gas containing ethanol? Today’s gas is not like 1970s gas. You probably need to switch to a slightly richer needle or adjust your mixture.
If the misfire goes away by pulling out the choke then that gives you your answer. You’ll need a richer mixture.

This is a familiar problem at that rev range and has been discussed before on here …. In my case the damper oil needed to be changed to slow the rising piston…… it could also be electrical …… others will chime in I’m sure

I had this. Try new plugs. I went to colder plugs after seeing mine were pink on the porcelain. Also went to richer needles

How long do you leave the choke on (maybe half choke)?

After starting on choke I run it for about 30 seconds then go to half choke to keep the revs up, then drive the car and after about a minute, choke full off.

I never drive it hard or fast until it is well warmed up. I never pull it out of the garage until it is running with the choke off and somewhat warmed up with good oil pressure. I have driven it without remembering to put the choke all the way in and it runs terrible. I have not tried pulling the choke out a notch to see if this misfire goes away. I did check a couple (not all 6) of the spark plugs and they were a clean light tan indicating that I was neither running too rich or too lean. After I got the car, I was running non ethanol gas. After reading many posts on here of ethanol being ok, I switched to high octane ethanol. Not sure if that is when the misfiring started, but will switch back and see if that helps

Regarding the warming up, the other day my wife and I went out to dinner about 20 miles away. We were there about an hour, started it up and coolant temp was still in the middle. Drove it for a couple miles then opened her up and the misfire began. By the time we were 10 minutes from home I opened her up again and no misfire.

I have no idea what needles are in the two Stromberg carbs. I have only had the car three years and have not needed to touch the engine until this misfiring started last year. I can try to change the damper oil to see if that makes a difference and have not ruled out an electrical issue. It does have a Pertronix ignition and I have thought about replacing the spark plug wiring, distributor cap and coil, which I am planning to do regardless. I could try different plugs, but as I mentioned, the plugs in it now look just fine. Other than that, I am still somewhat stumped!

Oh, next time I have her out and well warmed up, I will try redline and see how that goes. Can’t wait.

I don’t run ethanol fuels of any percentage in anything I own unless it gets driven frequently, as in at least once a week. Too many issues with ethanol if you run it in a vehicle that doesn’t get driven for weeks on end.

Hello Tom - How long should the choke knob stay in pull out? Should it go to half before all the way in?
Thank you
Enzo

Edit I see this was talked between you and Les

I set the choke where it helps the engine runs smoothly at a fast idle. Today I started at full choke. Half choke as soon as it started running. Backed out the garage went to quarter choke to bring the idle speed down to about a thousand. Idled for a quick minute. Headed out. Shut the choke off as I left the driveway. Then I have a slow drive through the neighborhood for about a mile. Then she’s ready to go.

Thank you. Sounds like what I do, even the part of slow drive through the side streets before going on main road.

Russell, based on all the thought you put into this I want to believe that you are headed for success! It doesn’t sound like mixture, but you will know for sure by trying one notch on the choke next time. Petronix usually work or don’t. (You might have an exception). Most ignition problems don’t get better with heat.

My 69 was very sensitive to timing with the original distributor curve. I don’t remember all the details, but I tried finding a sweet spot and never could. I was never happy until I bought a pertronix distributor for a 1965. Maybe subtract a couple degrees of timing as an experiment.

I did not try different types of spark plugs.

Thanks Tom. Next time I have it out, I will try the one notch out on the choke and see if that eliminates the stutter. I’m assuming that if that works, It means I’m running too lean? However, going by the color of the plugs I am at least in the ballpark.

Beware that one or two notches on the choke doesn’t actually change the mixture but only raises the idle speed. You have to slam the choke up to halfway or more to get an increase in the mixture.

That makes sense. I did take it out last night. It was well warmed up when I tried full throttle acceleration and it did stumble a bit. Tried one notch up on the choke which did not change anything. I then took it up to redline and it got there with no problem once past that miss firing point. I am still stumped! Could it have something to do with the advance?

Does it stumble at a steady 3000-3500 or just transitioning ? Is it getting worse,.plugs coils wires caps don’t get better with RPM save your money I’d bet mixture or advance
Could be almost anything my buddies bike had a stumble for years, turns out bent valve a shop had put in an 840 kit wonder how that happened

One other thought Do you really want to run it that hard ,when you have piston’s and valves wrapped around your ears you’ll wish you didn’t . Could be wear and tear
Cheers 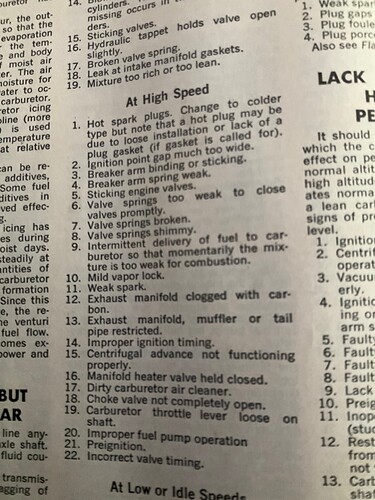 It might be just a little too much advance. It could show up mostly in that range because lower rpm you have less advance, and higher RPMs are faster and can handle more advance. 3500 is the “all in” RPM. Meaning the point where the centrifugal advance hits its maximum.

I’m not a mechanic but I did sleep somewhere last night.

Response to a couple questions,comments above that I did not answer.