My temperature gauge hovers just short of the red over heating mark. I have replaced the sending unit. Replaced the voltage reducer because it read 12 volts to the gauge instead of 10. I have checked the ground. Checked the inside of the gauge to be sure that there were no wires that were grounded to the case. Ran a new test wire from the sending unit to the gauge. I made sure the gauge was properly grounded. I have even tried three different gauges with the same results. The crazy thing is that if I hold the gauge horizontal, whether in the dash panel or in my hand, the gauge reads lower. The minute I turn it vertical it goes up to the red. All other indications are that the fans come on when they should and the temp reads about 180. Is there a specific sending unit that I need. Also as a side note I am not sure that the test gauges were good. My car is a series 2 2+2. Where do I go from here. Thanks

I made sure the gauge was properly grounded. I have even tried three different gauges with the same results. The crazy thing is that if I hold the gauge horizontal, whether in the dash panel or in my hand, the gauge reads lower. The minute I turn it vertical it goes up to the red.

As I understand it, the grounding of the gauge is not important from the perspective of how it reads, though it may impact if the gauge light comes on with the sidelights. However, the IVR does need to be well grounded - if it isn’t folks have reported that the temperature gauge will read high. An explanation of the attitude of the gauge (horizonal vs vertical) affecting the reading may well be the extremely Heath-Robinson nature of the gauge mechanism itself. It is very delicate and can be sensitive to the slightest environmental changes under some circumstances. The voltmeter in my Series 2 used to be hyper-sensitive to altitude, suddenly dropping about 2v if you went above around 6000ft. In the end I was able to get over this by adjusting the gauge using the two adjusters on the back (behind the cork covers) and a bench power supply for calibration.

The gauges are notoriously flaky. That said, I had a similar issue with my 69 S2 last year…The same VR runs the fuel gauge as well as the temp gauge… is your fuel gauge off? I ran the same tests, got the same results… fans on, temps at top and bottom radiator hoses were within range. So why does the gauge read at the far right side, rather than the usual N-O position? I put in a new sender (S2 style has a spade connection) as well. In the end, I decided to put in a new radiator, instead of mucking about with the recored original that was, at that point, 52 years old. That cured it all, and I have no explanation as to why. The car is back to registering N-O and that is here in Wisconsin, about 85 degrees today… and the needle went to R- M when we were in stopNgo traffic. 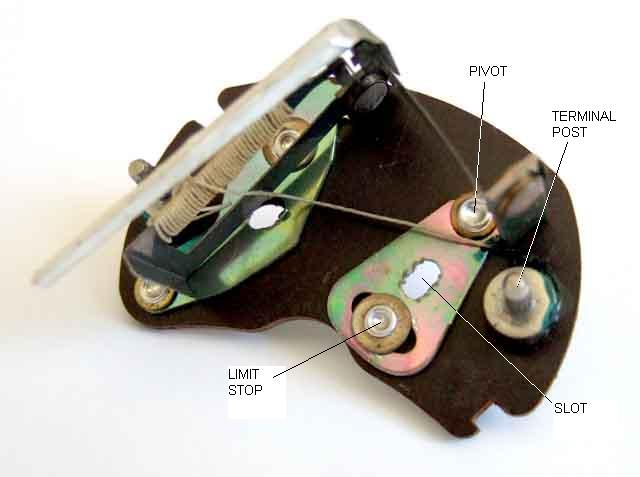 Ah Michael……my education is again enhanced ….I didn’t know the gauges were the same internally

Good Evening.
I appreciate the feedback that everyone is providing. The information that the fuel gauge is basically the same as the temperature gauge is interesting and I will swap the leads and see what happens. As far as the potential short in the gauge, I have checked it out once, but I will take it apart again just to be sure. Thanks again for taking the time to help me out. If anyone has other insight, please let me know.

What you seem to be saying is that you’re pretty sure that the actual engine temp is about right (maybe 180 deg. F. ??), but that the gauge reads too high. These gauges (fuel & temp) are really just ammeters, so the reading can be lowered by adding a resistor in series.

I checked my 180 deg. thermostat on the stove, and found it to be pretty accurate. I decided to try to get the needle on the gauge to read a bit above dead center with that thermostat. I experimented with different resistors (in the single-digit and low two-digit range if I remember right), and ended up installing some combo that put the needle right where I wanted it.

And when open the dash panel the reading drops to just over half full. I connected a temporary ground wire from the batter to the gauge and saw no change. I can’t imagine that the fuel gauge is faulty as well as the temperature gauge.

Since both gauges use the same IVR, I’d come back to questioning how well earthed the IVR is. How is the IVR earthed? If it has a black wire to a post somewhere on the back of the gauge panel, how well grounded is that? If the gauge panel is getting its earth through the hinges (perhaps because of an unconnected ground wire), I can well imagine that the integrity of that earth connection is affected by the position of the gauge panel.

I connected a temporary ground wire from the batter to the gauge and saw no change.

I don’t believe that there is a ground connection on the gauge (except possibly for the lamp). Have you tried a temporary ground wire from the battery to the IVR ground - on the original IVR it was the casing of the IVR as I recall?

There are only two possible culprits. The first is the connection to the sensor. The lower resistance, the higher the reading. So measure resistance between the green/blue wire and any ground. If you can, see if it changes as you raise and lower the panel. It could just be a bad sensor, a lot of the new stuff is questionable.

The other possible culprit is the IVR, although if it’s that, I would expect problems with the fuel gauge as well. But check the voltage between the green/black wire and any ground as you raise and lower the panel.It’ should be about 10V.

There’s no need to ground the gauge. The entire case is grounded to the instrument cluster by the U-brackets. Gauge ground only serves the lighting, the instrument itself floats.

I had similar problem with my temperature gauge. It was reading very high on the gauge but when I checked the actual temperature at the front of the thermostat housing and found it to be 170°F. The gauge was showing this: 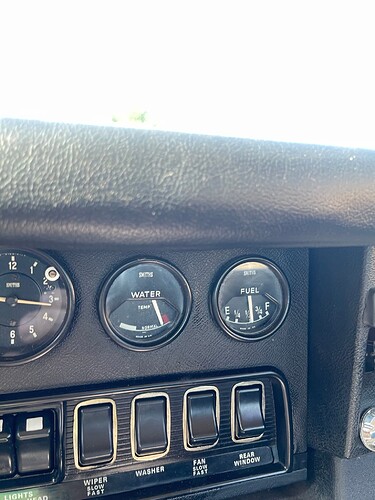 Yesterday, I cleaned up the connections on the sending unit and gauge. My car has a switch with an indicator light for turning on the fans manually. The light comes on when the fans are turned on by the either the Otter switch or the switch on the dash. 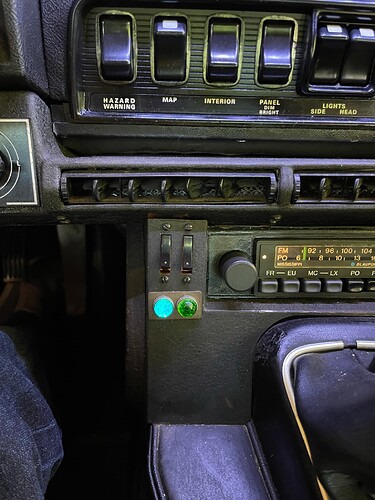 IMG_32871536×2048 303 KB
I took a photo of the temperature gauge when I saw the indicator light illuminate. I’ve got the CoolCat Otter switch which is set turn on the fans at 185°F. I don’t know what temperature the sending unit was seeing but I imagine it would be higher. 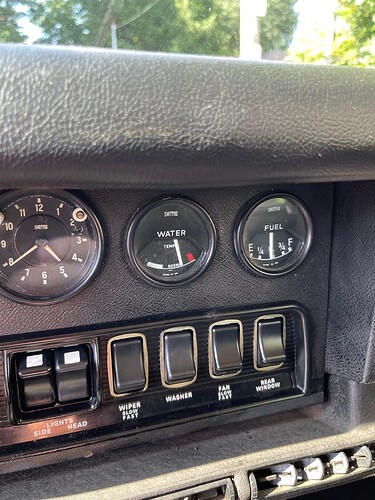 It was about 90°F yesterday when I drove the car and the temperature gauge never got as high as it did last time. The only change was, as I mentioned above, cleaning the electrical connections. 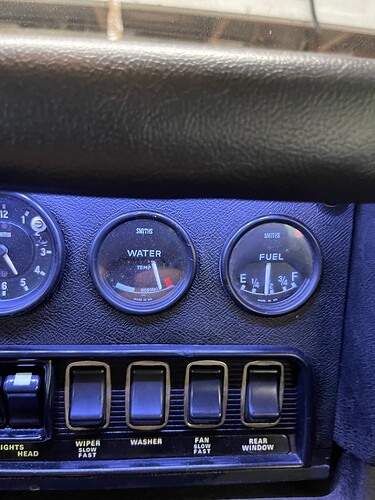 So it looks with the fans running, the needle moved up another needle width or so but no more.

Good morning Dave. Ironically yesterday after rechecking for shorts and other checks previously recommended I decided to clean all connections. I plan on running the car today to see if I improved anything. Thanks for everyone’s input. I will post an update.