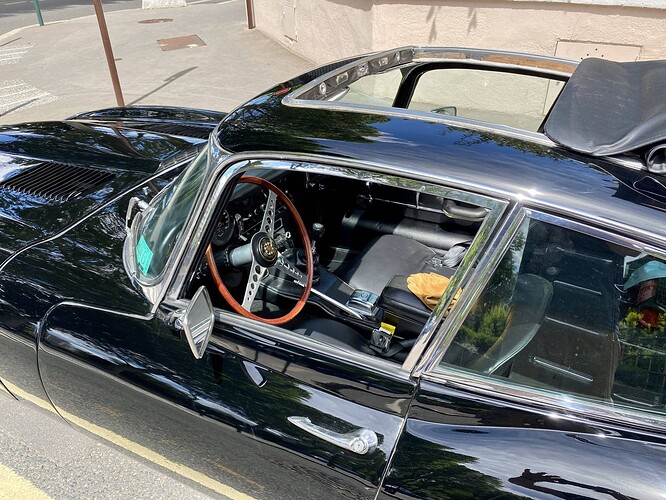 It’s my understanding that the Webasto and Hollandia sunroofs were dealer or aftermarket options, and not installed at the factory, nor were green tinted windows.

Interestingly, this car is in France with a clear Florida title.

Sometimes the stories are better than the car, lol.

nor were green tinted windows.

I don’t know about earlier cars but tinted windows were factory options on the Series II cars.

My 1964 XKE coupe has green tinted windows. They aren’t very dark. The car was originally delivered in California.

As for the sunroof being factory, I don’t believe it is so. I have never seen any proof of factory installed sunroof in all my years of judging series I e-types.

I went and look at the pictures and there is a tag “fitter by A. Owen LTD” NOT FACTORY FITTED.

The “Fitted by” tag on the roof opening indicates that the top was fitted by A.Owens Ltd, 4A Kings Ave, Clapham, SW4 - ie a London address. 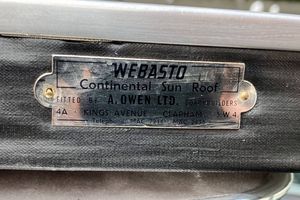 This for a LHD car destined for the US. So, though I agree that the roof was not fitted at the factory, it was also not fitted by the Jaguar Dealer. I vaguely recall reading that Webasto sunroofs could be ordered by the customer in the factory order, and that the car would be shipped to a roof fitter during production before being returned to the factory for dispatch to the customer. Unfortunately, I cannot remember where I read this, or verify if it is true. I also own a FHC with a Webasto roof that was believed to be part of the original customer order. In my case, the car was sold in the UK, and the tag on the roof opening indicates that it was fitted by "Roof Installations Ltd, Webasto Works, Kings Avenue, Clapham Park, SW4. 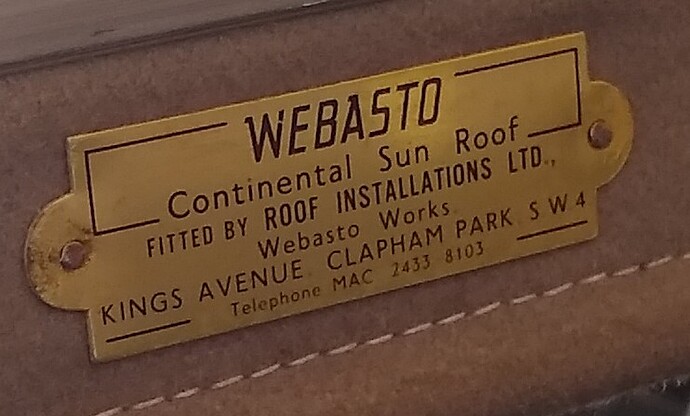 webasto742×448 65.3 KB
My car dates from 1966. I wouldn’t be surprised if these 2 companies were one and the same (1964 vs 1966). If the number of sunroofs ordered was small, it probably made sense for Jaguar to ship the cars to/from a subcontractor and then complete the manufacturing/testing in house once the roof was installed. If this is the case, then though the roof was not strictly speaking “Factory Fitted”, it would have been supplied by the factory to the selling dealer with the roof installed, so effectively the same thing. Of course, none of this precludes the possibility that some Webasto roofs were not ordered from the factory, but installed by the dealer at customer request. It would be nice to hear from others with Webasto roofs.
CliveR (CliveR) September 17, 2022, 11:57pm #6

Is it possible that a person from the sunroof company travelled to the factory to install the sunroof?

I hadn’t thought of that. It would probably have made more sense for employees of the fitting company to install them at the Jaguar factory, rather than ship the cars to London. All the tag on the roof really indicates is which company’s employees fitted the roof. So, I disagree with @Bob_S when he says that the tag is “proof” that the roofs were not installed at the factory. On the other hand, I see the tags as proof that not all Webasto roofs were installed by the Jaguar dealerships. Interesting discussion.

“In this book there are photos of a very early Series 1 two-plus-two factory car with what is probably an original sunroof, and indeed in lists of extras from 1965 and 1966 Jaguar quoted a Webasto sunroof, presumed to be of the sliding fabric type as seen on the car photographed, with a front deflector for the E-type fixed head coupe which must have meant both the two seater and the two-plus-two. However, I remain sceptical of the idea of a “factory-fitted” sunroof; my belief is that if a sunroof was required or ordered, Jaguar would farm out the car, post-production, to a specialist sunroof company which did the conversion. This may mostly have been the case for cars sold directly, for instance for Personal Export Delivery, whereas on normal home market cars it is more likely that cars had sunroofs installed by the dealer at point of delivery, or after the car had been delivered to the first owner.”

Other originality guides I have on hand (Haddock’s books, Porter) don’t mention sunroofs at all.

My Series 1 4.2 OTS had/has tinted door glass, but not a tinted windscreen.

it is more likely that cars had sunroofs installed by the dealer at point of delivery, or after the car had been delivered to the first owner

This sounds plausible. I recall a friend having a sunroof installed in his new Ford RS2000 by a fitter who came to our workshop. It was around 1980, I don’t remember the brand.

If you could find Jaguar documents indicating that the XKE/E-type sunroof was factory installed, I would be willing to listen. But up to this point I haven’t seen any Jaguar documents about factory installed sunroofs for XKE/E-types. Can you find Jaguar part numbers for it? Were there body reinforcement needed? Are there Jaguar engineering drawing?

If my memory is any good, all my book are at the new house, the MK 2 had factory installed metal sunroof (a rare option). The bodies were reinforced and there were part number for the reinforced body and sunroof.

Here in Michigan there was a (1966 I believe) XKE/E-type that used to come to our concourse with a steel sunroof. It wasn’t factory installed either.

Until there is some Jaguar documentation, I stand by my statement I don’t believe there was a factory installed sunroof for the XKE/E-type.

Is it possible that a person from the sunroof company travelled to the factory to install the sunroof?

Unlikely, but there was a Webasto sunroofing shop down Browns Lane in Allesley, that could install such a sunroof on a new car, yet to be delivered. My friend has a Daimler Double Six coupe delivered new by H.R.Owen in London UK with all original paperwork, including the warranty papers for the Webasto sunroof.

But technically they were never installed at the factory.

Tinted glass was available from the factory and is not rare at all. Also the factory Spare parts books confirm this ”Sundym” glass in blue or green.