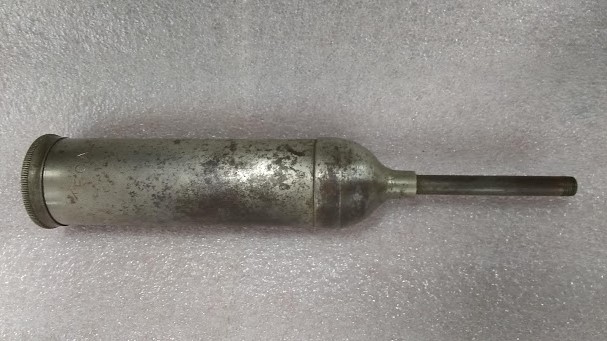 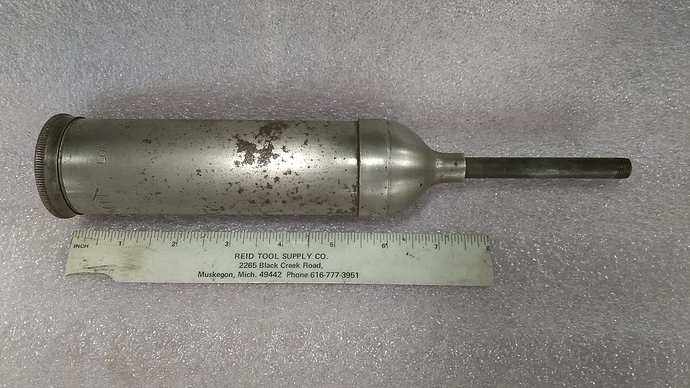 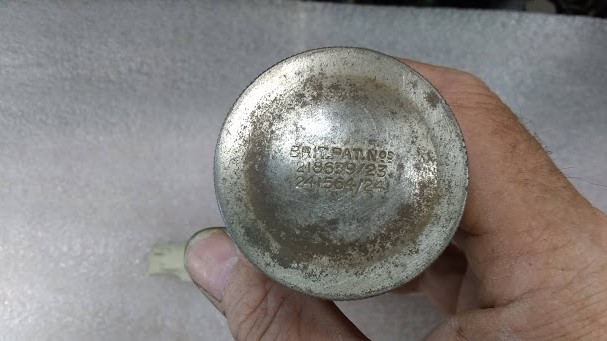 BTW the first patent is Oscar Zerk’s original version from 1923 with a pistol grip handle, 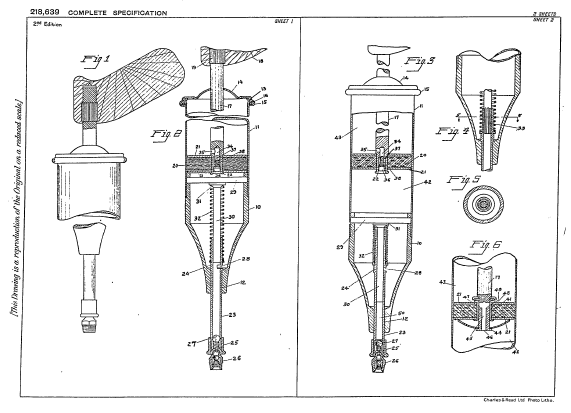 and the second is Tecalemit’s pump action version dated 1924 similar to this one. 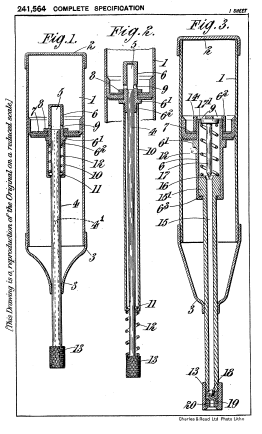 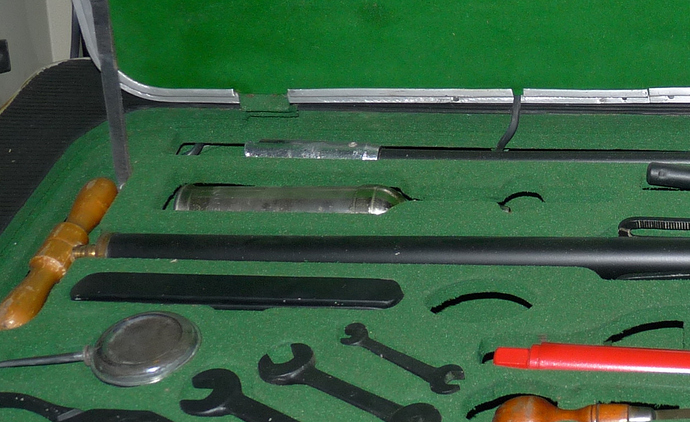 Ok thanks, I’ll go with it. Here is another that appears to be the same. 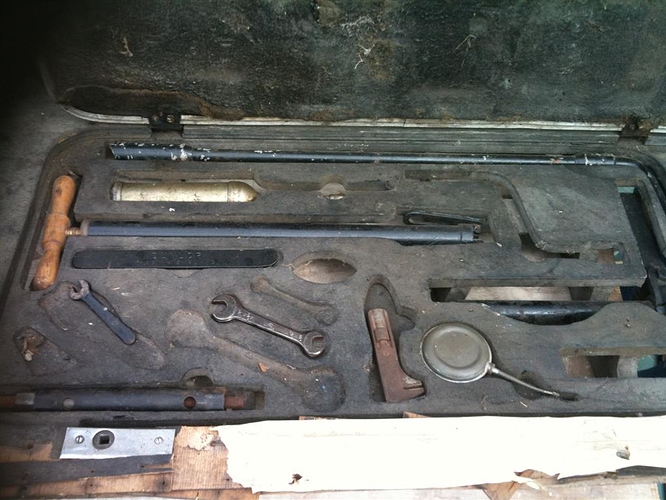 Hi Peter.
Is that your tool kit? If so what tip is on the grease gun.
Is there a leather retaining strap for the tool try lid on both sides?
Regards Graham

Sorry Graham, It’s not my tool kit just a photo I took of a car I came across but I can’t even recall which car. From the photo I think the tip is pretty small.

Like all things Tool Kits, there is no simple answer, DEPENDING on how accurate or otherwise you wish to be…
The GREASE GUN as fitted to all SS-Jaguar, 1936MY to 1940MY was a TECALEMIT ‘POM POM’ Gun.
Trouble is, the Tecalemit POM POM Gun was made from 1930s up until at least late 1950s, and evolved considerably over that 30 year time period withy respect to its manufacturing detail and indeed its finish.
Also the POM POM Gun was offered with a choice of three interchangeable, screw on CONNECTORS.

So for an SS Jaguar, first issue to ascertain is what specific age is your car, as the correct Grease Gun for a 1936MY car is not the same as for a 1940MY car, and variations in between, including having a painted (two different colours) or a Nickel Plated finish.

Same comment about the CONNECTOR, although less differences, with earlier cars having a TECAZERK Connector, and at this stage I believe at some very late point, so most probably for 1940MY cars they now had a HYDRAULIC Connector, noting the pre-war Hydraulic Connector was basically the same overall/dimensionally as that fitted to a Mark IV PLASTIGUN, but still with a significant visual; difference.

I dont have a good photo (side by side) of the two different CONNECTORS in question for SS Jaguar, but they are as shown on this following picture from a 1941 Tecalemit Catalogue… 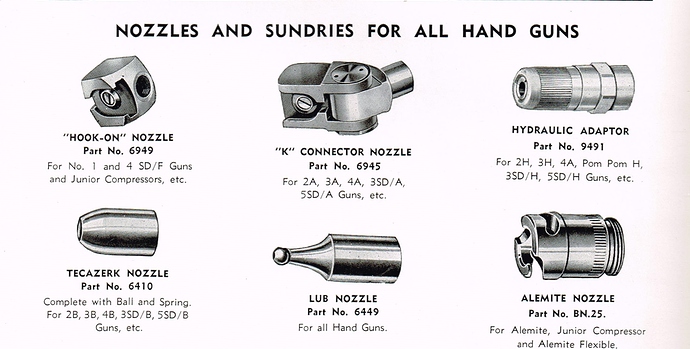 PS. This 1941 Catalogue refers to these as “Nozzles” whereas post-war Tecalemit Catalogues now refer to them as “Connectors” which is the term I prefer, as “Nozzle” is now used for other totally different items. 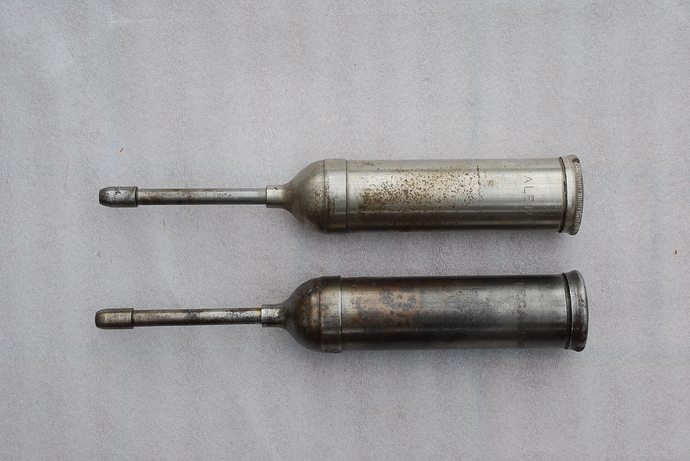 And below, a POM POM Gun, painted in the Tecalemit metallic brown colour, and fitted with an HYDRAULIC Connector… 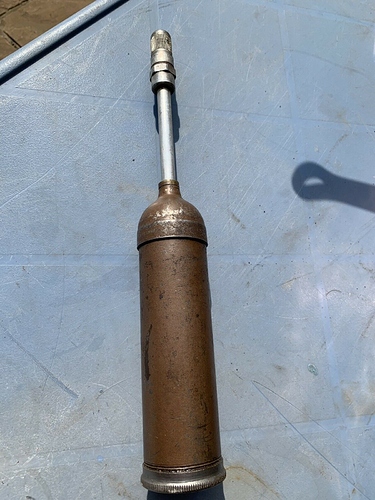 Very interesting, thank you Roger.
So the different end fittings are for use with different fittings that would have been found on cars, trucks and machinery of the '20s and '30s when the lube world was not standardized. I’ve seen '20s cars with fittings that would need the twist-on Alemite Nozzle.
For example, my SS front hubs have what we call here normal Zerk fittings, and the Pom Pom would need the Hydraulic Adaptor end; 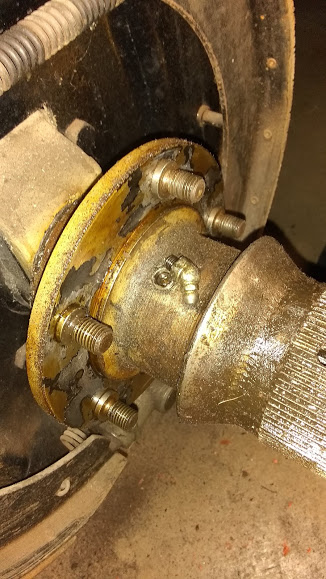 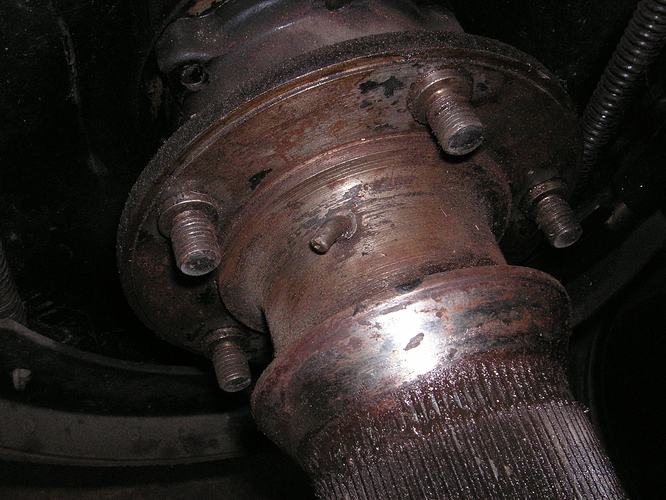 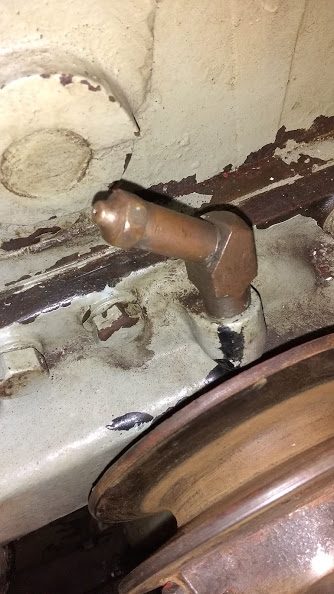 I had to look up Pom Pom, as around here they are big balls of yarn held by cheer leading girls at football games so their hand motions can be seen by the spectators in the most distant seats. I guess the name refers to a 37mm gun that recoiled.

I snagged another one on ebay UK. 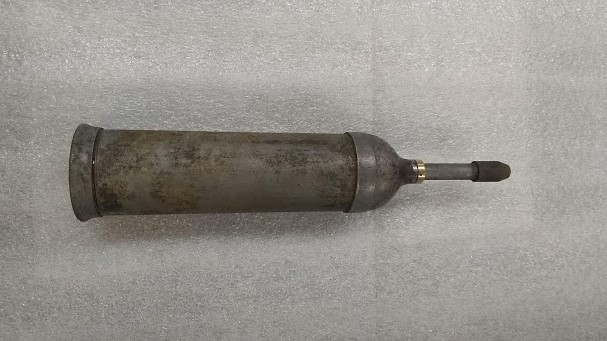 This one is nearly identical to the Tecalemit with which I started this thread, but has no markings at all, and has a brass ring bushing where the shaft slides through.
It has a small end fitting that looks like it would work with Mark V door hinges. The fitting was why I wanted it.

This was a package deal with the ebay seller, an operator of an antiques shop in Hounslow England. To get it I had to take two others, one marked PRIMA 1946 and the other not marked, and neither known to be Jaguar related, but they look like they are from the era of our interest on this forum. 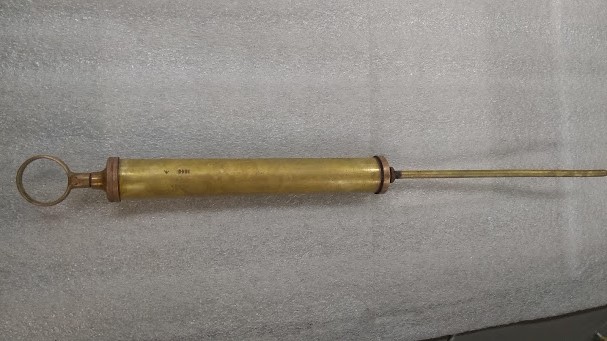 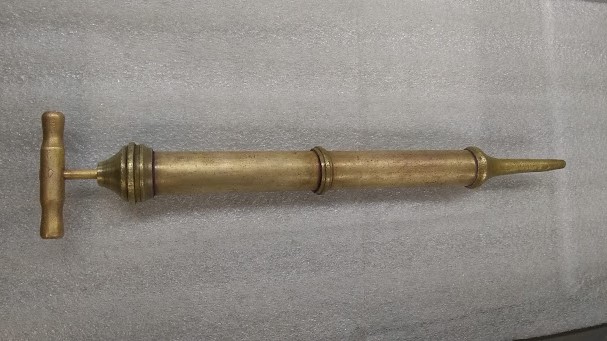 Neither has any provision for an end fitting of any kind, so they just squirt all over, perhaps were used for oil rather than grease. Maybe they once lubed Swallow sidecars?

The order was placed Aug 6 and ebay thought delivery would be Aug 25-29, came today Aug 30, pretty close I guess. It might have come sooner but the seller wrote “Grease Guns” on the package, so who knows what the package handlers thought. The US Army’s M3 sub-machine gun was called that.
The package had an interesting journey, first Royal Mail, then Hermes Parcel2Go, to Heathrow, then United Parcel Service in New York, then UPS in a town near me in the Chicago suburbs, then United States Postal Service in the town next to mine, then USPS in my town, and finally to me.

Now your latest photos are interesting - a 1938 SS-Jaguar with a ZERK Grease Nipple? I must admit I thought all SS-Jaguars were using (Tecalemit) Hydraulic Grease Nipples from 1936 onwards. But I don’t know, so would love to hear opinion’s from some of our SS Jaguar experts.
On the Tool Kit Grease Gun aspect, all SS-Jaguars received a Tecalemit POM POM Grease Gun (UK made, nothing to do with Zerk) but “I think” initially with a (Tecalemit UK made/Zerk licensed) Tecazerk Connector (that was quite suitable to use on either a Tecalemit(UK) made Zerk (licensed) or Tecalemit Hydraulic Grease Nipple; but “I think” very late SS-Jaguar now received their POM POM Grease Guns fitted with the significantly more expensive Tecalemit (Made/patented) Hydraulic Connector.
During the 1930s and 1940s, the Tecalemit Pom Pom Grease Gun was offered with a choice of three different screw-on/interchangeable Connectors, which are well illustrated in attached page out of the 1941 Tecalemit (Australia) Catalogue. (pre-war Tecalemit Australia imported/sold a range of Tecalemit UK made items, but during WW2 started to locally make components, and postwar actually set up a factory fully making certain products - including complete Grease Guns and Connectors) 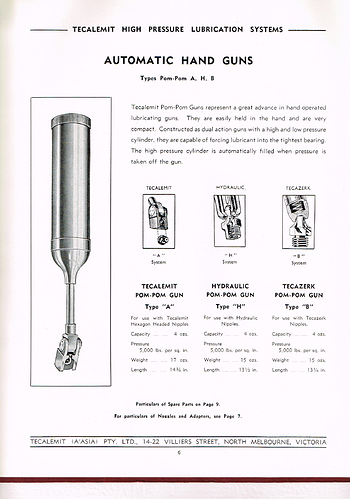 And my research to date, indicates that your POM POM Grease Gun, with the visible/exposed brass bush is a POST WAR design change - these basic Pom Pom Grease Guns were still being made into the 1950s, by which stage they now had a cast-alloy end cap…
Your previous acquisition with the steel end cap with British Patent stampings and no brass bush is more probably correct for 1938, albeit still no conclusions whether painted Tecalemit metallic brown, painted Black or Nickel Plated all three options made in the 1930s…

The king pin bushes have Zerk style on the left and the hubs have the even more ridiculous style on the right.

When I lubricate the king pins I unscrew the stupid nipples and I screw in the delivery pipe of my grease gun. This method allows me to see the grease coming out at the top and bottom of the bushes whereas any attempt to achieve the same result using the Zerk nipple only results in 90% of the grease escaping before entering the nipple.

My replacement hubs came with threaded grease nipple holes rather than the push-in system that would swivel away from you when you tried to push against it.

I will allow the possibility that the Zerk fittings on my '38 front hubs may not be original, changed by some PO who probably got frustrated with whatever was there before.

The origins of the grease gun go back to 1916 and a boy named Arthur Gullborg working in his father’s factory, the Alemite Die Casting and Manufacturing Co. in Chicago. His job was to fill the grease and oil cups of all the machinery. He thought his bicycle tire pump could do this job faster by pumping the lube in under pressure, and convinced his father to make screw fittings that would take the place of the cups. The idea prospered, by 1918 they had a big customer in White Motor Trucks for the US Army, and the word spread. Here is an ad from 1921. 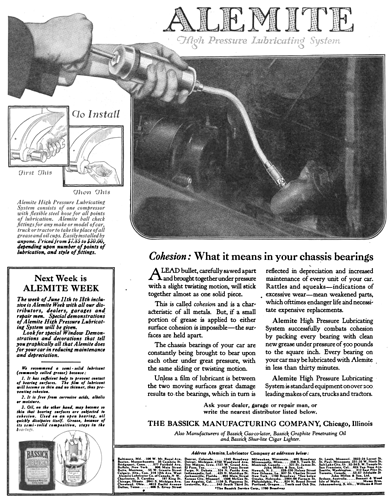 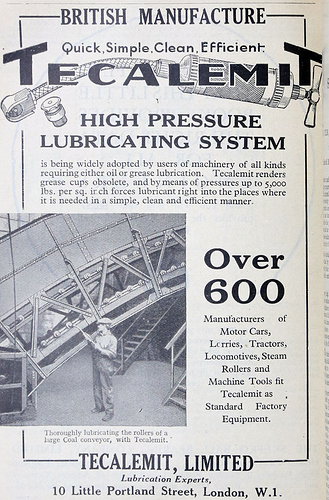 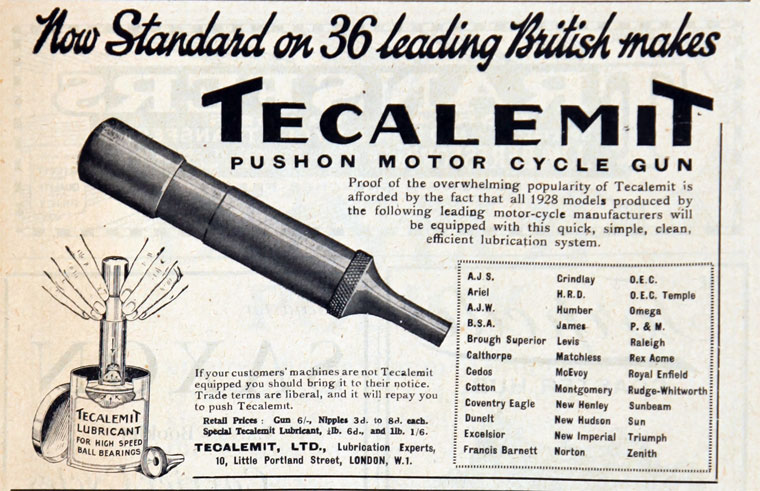 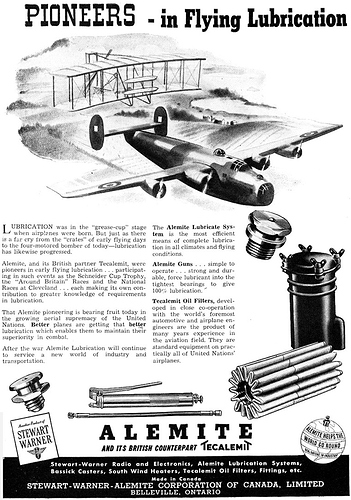 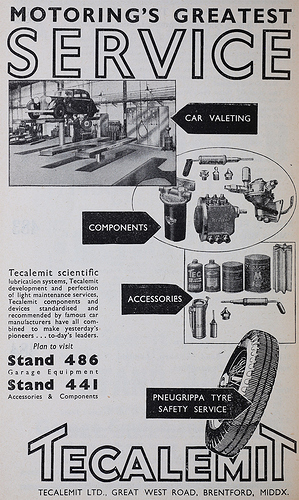 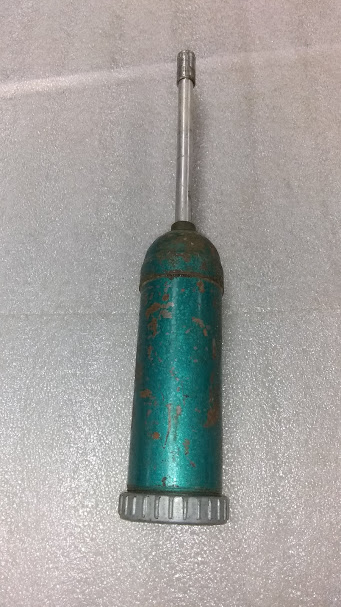 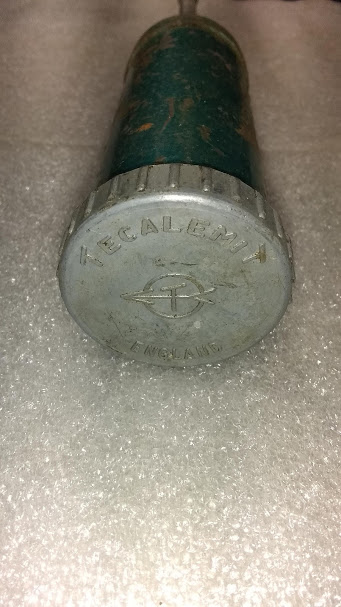 Good history of the various USA and UK companies, which I can add detail of the Australian branch of Tecalemit (UK) in the scheme of SS Jaguar and Jaguar tool kits relevance, being initially based in Melbourne as an importer/distributor only of UK made product (so SS Jaguar relevant) up until WW2 period, when for logistically reasons started to locally assemble UK imported product augmented by Australian manufactured minor items, then in the late 1940s shifted to Adelaide where they set up complete manufacture of many items, still augmented by UK imported items. From a Jaguar tool kit perspective the Australia never fully made either the PomPom Grease Gun (as per SS Jaguar) nor the PLastigun (as per Mark IV-V-early XK120-early Mark VII), but from an authenticity perspective did make fully the screw on Hydraulic Connector, and visually different from the UK made one.

I do have several detailed Tecalemit catalogues both UK and Australian issues, but would desperately love to see any UK issues pre-war. Does anyone have or know of any 1930s Tecalemit (UK) catalogues that cover their Handgun (Grease Gun) and Grease Nipples product line - if so I would love to hear/see as my post-war Tecalemit (UK) and my pre/during-war Tecalemit (Australia) Catalogues are invaluable definitive reference material. Happy to exchange .pdfs…its just the detailed information I am seeking…

Attached scans show cover of my October 1941 Catalogue fully explaining on the face page that it was FIRST Australian Catalogue, but with lots of detail, including cross-sectional drawings and parts listings of various product including the then current UK made Pom Pom gun 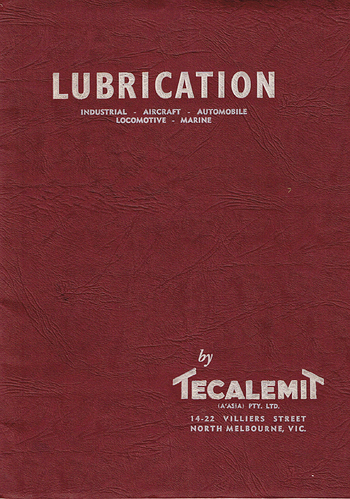 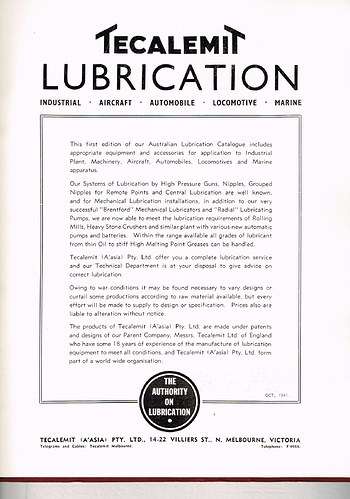 Perhaps the Germans liked the SS brand in 1937?