Can anyone please tell me what this electrical component is, or its purpose? It is connected by a single wire to one of the main electrical connections on a fuel pump. It seems to be grounded by its mounting to the firewall. It doesn’t seem to appear in the wiring diagram I am consulting. Many thanks! 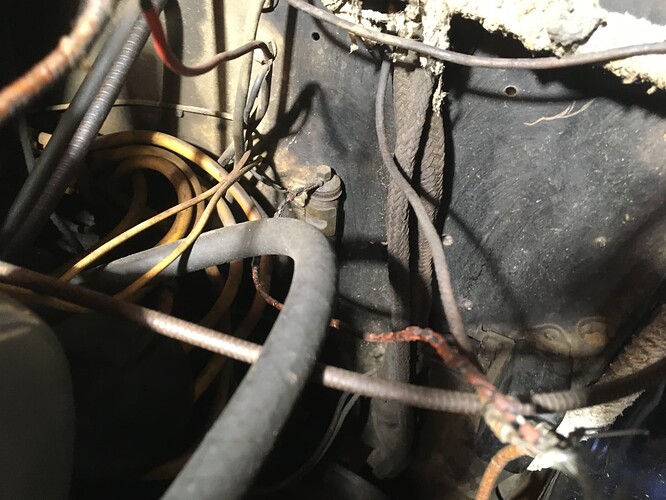 Hello James, the photo suggests a capacitor/condenser. A capacitor is used inside the distributor. It’s not clear to me the function a capacitor would play at the location you describe in the wiring. Often drawing a wiring diagram will help. The photo looks like the wire at the top of the “capacitor” is connected to two wires each of which go where?

I agree, it looks like a capacitor.
Normally they are inside the distributor, reducing the arcing of the points, but there is no reason it could not be, but rather it could be rigged up on the outside, if for example someone couldn’t get the right Lucas one but had one of a different brand that would not fit inside.
Body grounded and one wire to the CB or + side of the coil would work.

Thank you. I had the fuel pumps out for rebuilding when I took the photograph, and ultimately replaced several sections of wire as you can see the originals were in dangerous condition. So, the single reddish wire connected the component to the electrical post of the fuel pump. I believe (I am away from the car’s location at the moment) that the other two wires connected there were the connection from the coil and the connection to the second fuel pump. Could that be?

So, if it is a capacitor and the car is running fine, just leave it be? Or try to replace it with a capacitor that would fit inside the distributor as designed?

If it is in the fuel pump circuit it is also protecting the points inside the fuel pump as well as the ignition circuit.
Not original factory work, but somebody’s clever idea from long ago.

Originally the fuel pump did not have a capacitor inside the cap. I remember my Mark V did not. That idea came along later, in the 1950s I think. Later they had diodes inside.
Now people convert their fuel pumps to electronics so there is no need for a capacitor inside.

So you can leave it as is if you like, or put one inside the distributor if it bothers you, and if the fuel pump still has just points inside, you can improve it in whatever way you wish.

Thank you - very interesting. I’ve just had those fuel pumps rebuilt, so they are electronic now and I guess that means there is no need for a capacitor for them. But, I think I will leave it until the distributor needs some attention.

These are the best condensers available. As he explains, he has them made for him to his exacting standards.

Might be wise to buy on of his ‘red’ rotor arms and one of his coils too.

Hello James
Welcome to the Forum.
Cars of the period, especially quality ones e.g. Rolls-Royce, Bentley used capacitors on various parts of the electrical circuits to reduce or eliminate electrical radio interference, this is possibly a similar fitment.
Regards
David

I am glad for the reference, thank you. I believe the shop will be re-assembling the distributor shortly, and I will pass along this information. Thank you!