I will be repainting the bonnet of my S1 this winter. At present the under bonnet (hood) insulation is a fibrous material with reflective foil finish which IMHO looks too flash and brash for the car. I am trying to find a subdued alternative. Hardura and straight felt are available but I am told these are non fire retardant and presumably therefore a fire hazard in the engine bay. Having said that I see a web site which promotes the use of Hardura as follows:-

As used on the early Jaguar XJ6 and Minis.
Can be used under bonnet, engine bulkheads or extra noisy areas where a wipe clean surface is preferred.

Now I am undecided.

boom mat or something similar would do nicely

You can still get the series three under bonnet sound proofing in the UK, not sure if it would fits Serie 1 though. I have also wrapped my old and horrible looking loom in Funk Motorsports Black Self Wrap protection sleeving, its made an amazing difference to the look of the bay and I no longer can see the old brown cotton weave. It was the easiest thing to fit.

terminology may play tricks. I always thought “Hardura” was the term for the cardboard like material the air valances between the grille and the radiator an alongside the engine of my Spitfire were made of. Now I just found that it can be had as a thick layer of felt covered with a vinyl surface. This one looks pretty much like the one used in my early SII car. https://dgs-autoteppiche-shop.com/Hardura-verschiedene-Farben.

My own car doesn’t sport the original bonnet lid liner any more, but has a black, matte cover that has been taking on the last 15 ys or so quite well and the looks are very “old school”. It looks period and has stood the test of at least 15 years in very good shape; unfortunately, I can’t tell for sure whether it really is identical to that Hardura material. This pic is from 2006, but the liner hasn’t changed a lot. 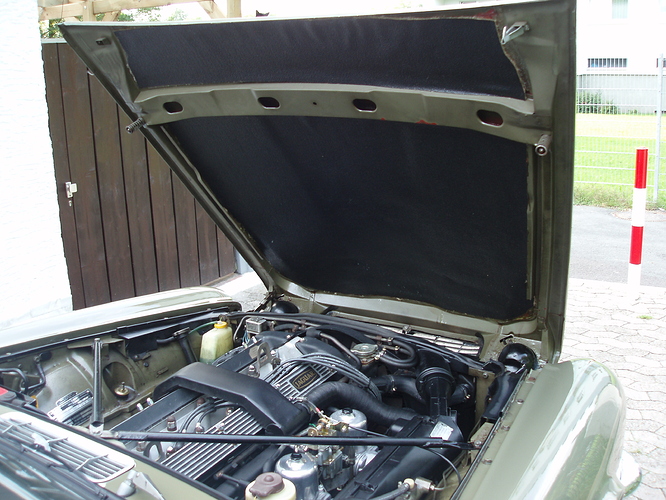 Frankie,
I purchased under bonnet insulation liners made of a neoprene like material several years ago on eBay for my two former Series III XJ6s. Attached is a picture of the under bonnet liner of my 1984 XJ6 Vanden Plas. 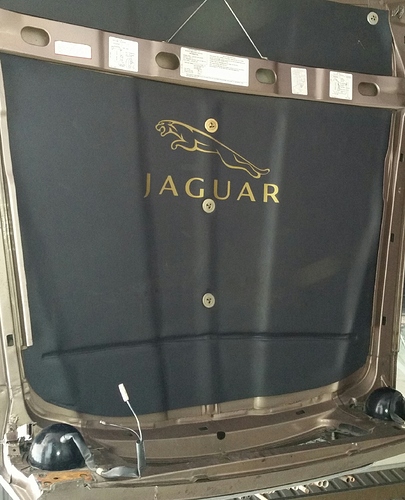 The material held up nicely over the years. I particularly liked the Jaguar decal provided with the kit. I heard on this list that the eBay Seller became ill and passed away. I haven’t seen anyone else selling this liner on eBay since then but it may be worth your time to check.
As Carl would say, the original fiberglass liners looked like “moth eaten bear rugs” and although these replacements were not OEM, they looked quite nice. Before this I tried a shiny silver aluminized liner that one of the USA parts suppliers sold but I was not pleased with how it looked.

Mine looks just like this one! It’s a self adhesive product I bought from Repco (one of our FLAPS). Easy to fit dense foam with a synthetic “cover”. Despite my reservations about durability it’s still there after four years. Works well. Contemplating putting some in the firewall - the original stuff was removed for repainting. Paul.

This is a pic of an original S1 underbonnet. I think the material is a kind of fibreglass product. Hardura was used in the underside of the bootlid and boot floor mat on Jaguars ( not Daimlers), but I doubt it is heat resistant and definitely not fireproof, so don’t use that. 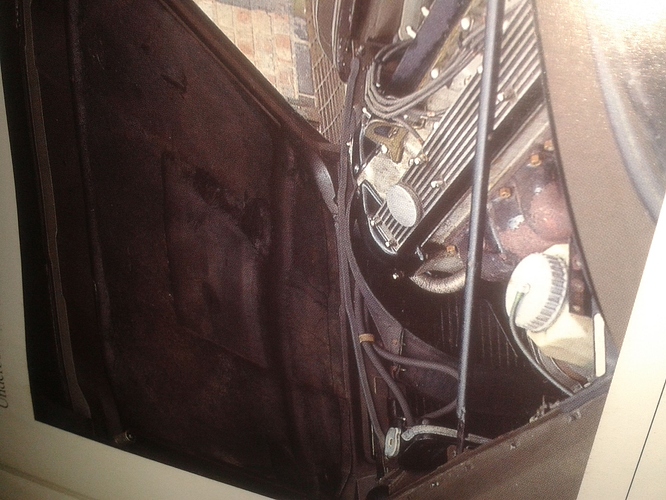 Another pic, this from my car. 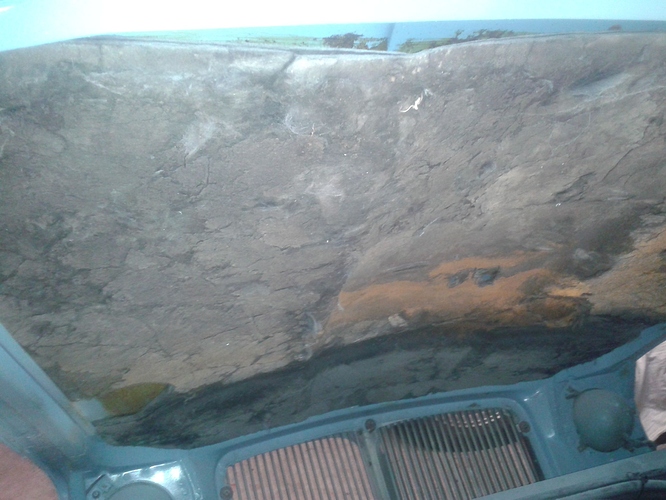 This is a pic of my foil faced liner as of now. 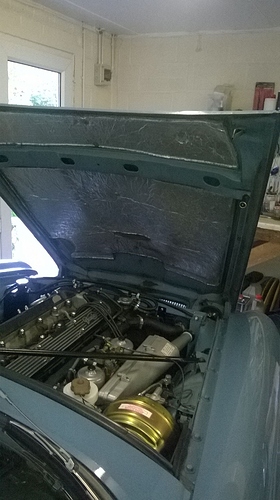 Bonnet liner1059×1886 257 KB
Yours is the look that I would like to acheive, Jochen. I cannot recall the material originally used for bonnet lining in contemporary Jaguar engine bays but I have a clear recollection of the material used for heater box insulation in the Mk2, S type and similar models. I think this was “Hardura”.

My main concern was combustibility, but an engine bay fire will have plenty of other combustible materials and fluids at hand to feed it and on reflection perhaps I am being too cautious on that front. Ill have to buy an extinguisher or two.

I have a sample of Hardura coming form a well known trimming shop and will put a blow torch on it to see what happens.

Interesting photo Kevin. I’ll have another trawl on line but so far I have not seen any manufacturer or supplier who specifies the level of combustibility for these bonnet liners, but there are sites that promote the use of Hardura in engine bays.

I’ll let you know the result of my “torch test” when my sample arrives.

I have an early (1969) XJ6 with under bonnet insulation and it also seems to be a glass fiber mat that was painted over in black. If hardura stands the heat it would be nice.
I will make a useable picture later. 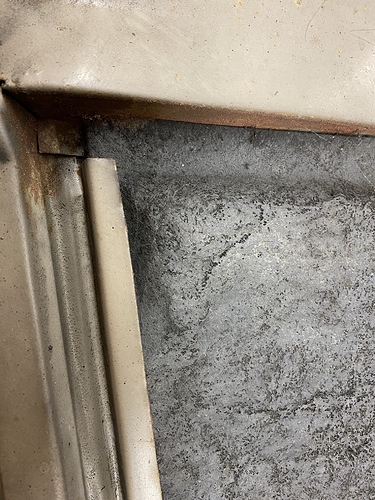 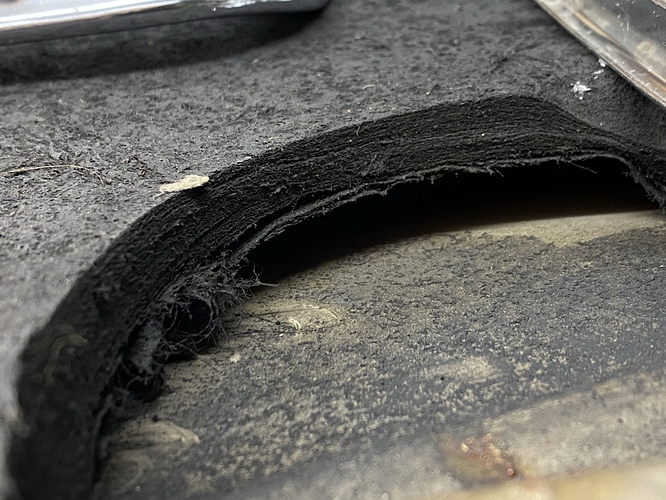 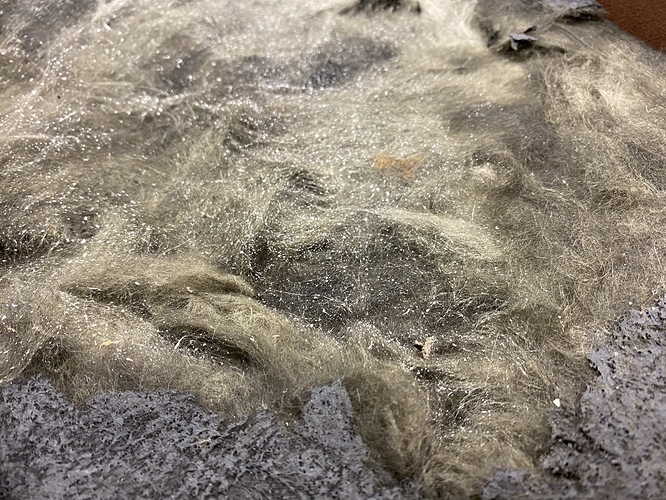 The center got used by a mouse that built a nest behind the master cylinder and used the exhaust as a walnut shell dump - no hard feelings, even though I don’t know yet if and how I can repair it.
As always, the cam covers are a close fit and the crankcase breather tube is not only very close but gets v e r y hot!

that looks quite different from mine - do you have some full views, maybe?

Your first pic looks like there was an extra edge to fix the liner. Which corner is that? Similarly, where would that “hole” shown in your second pic be? The last pic shows the fibres underneath clearly, but how does it relate to the second pic where the hole cut through rather indicates a pancake pile of layers.

BTW, does your early car already have the hot air duct from underneath the heat shield over the exhaust manifolds to the air filter box? Actually, I find it a nice feature allowing to tune the carbs always to the same air temps. Yet, this duct is awfully close to the hood. Yet it’s true the closest fit is between the carbs and the hood.

If interest is such I will clear all the boxes and things from the rest of the liner and take full pictures! Garage is a little tight and that’s an understatement.

The first pic should be the top left corner as seen from the inside of the car with the bonnet up, the liner ends at the big brace so it only covers the lower ¾ of the (opened) bonnet. Whole photo next time.

The second shows the cutout of the header tank. The third shows the ripped out section so the layers if there were such got disturbed. The black coating looks like something between paint and undercoating.

I have no air duct. The manifolds are ceramic coated, with three individual pipes so you can see the nuts below, and no bosses for the heat shield. Also my AED is the same as in much earlier jags, and has cute individual bent pipes to the individual inlets of each cylinder. The AED is switched by an otter switch near the thermostat. 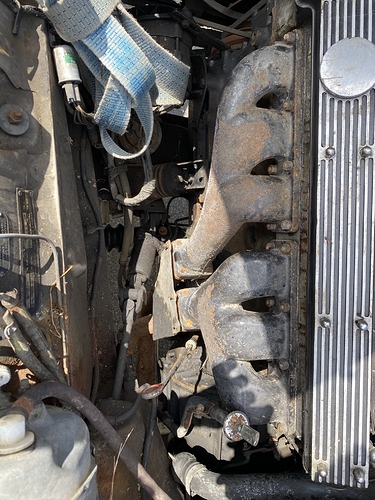 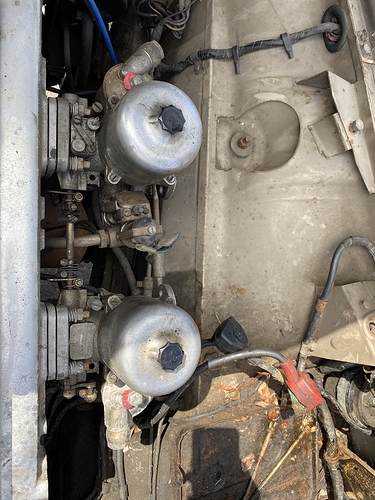 More in the next days.

Thanks David - explains a lot! There’s no cutout for the header tank on SII - different header tanks?

IIRC SI cars started with HD8 (as opposed to later HS8) carbs and had an electric enrichment device totally different from the AED with the bimetallic strip as often discussed. It is mounted as per your pic at the front carb and is controlled by a solenoid valve which is triggered by a thermostatic switch mounted at the front part of the intake manifold. Different from the later AED it seems to be adjustable via the shape of the jet needle, the size of the disc, the tension of the spring and the lash of the jet needle. Sounds like hours of fun … just about right in the digital age

Best wishes for your project

I did some basic tests today with samples of Hardura (new) and from the existing bonnet liners of my S1 (liner a retrofit by a PO) and (for comparison) my 2008 Volvo. The results surprised me. All three samples ignited without much trouble when exposed to the flame of a match and continued to burn unaided; if anything the Hardura mat was slightly less willing to catch fire than the others. After the flames were extinguished all three continued to smoulder and emit smoke until plunged in water.

It seems that none are “non combustible”. I have now fixed a small sample of the Hardura to the underside of the Series 1 bonnet and will see if engine heat has any effect after driving around for a bit. I would imagine under bonnet temperatures could be IRO 100C.

Fibreglass is fully “non combustible” and liners made of this material will presumable not ignite. However, fibreglass is less dense that some other insulation materials and whilst very good for thermal insulation will probably not be as effective at sound deadening.

All three samples ignited without much trouble when exposed to the flame of a match and continued to burn unaided; if anything the Hardura mat was slightly less willing to catch fire than the others. After the flames were extinguished all three continued to smoulder and emit smoke until plunged in water.

These are surprising results indeed…

Interesting. There are all sorts of places you’re not permitted to use flammable materials when constructing a building, but I guess there’s no such oversight for automobile construction. I’ll admit I’d feel a little better if that hood liner was not flammable.

Fiberglass is fully “non combustible” and liners made of this material will presumable not ignite. However, fiberglass is less dense that some other insulation materials and whilst very good for thermal insulation will probably not be as effective at sound deadening.

Basically, a single layer layer cannot fill both requirements, but dense fiberglass is likely the better - a hard cover simply act as an echo chamber. And heat insulation is neither here nor there, but heat transfer through the material is a possible factor…

While combustible tests are fair enough; whatever you have is unlikely to self-ignite - and with the engine on fire - flame retarding insulation is sort of secondary. And don’t try that fire test on any material inside the cabin (where you are)…

Researching on line caused me further surprise to find that there appear to no current regulations requiring non combustible vehicle interiors. The accepted level of combustibility seems to be a burn rate of no more than 100 mm per minute as set out here:-