Engine install from below

As I am slowly wrapping up tweaks to my engine on its running stand, I’m trying to get ready for the big day of putting it in my 68 2+2. I plan on doing it from below bc I have a nice motorcycle jack and the bonnet is off. What needs to come off the engine for this method? I’m assuming carbs, manifolds, but wasn’t sure about anything on the front. I was hoping for some collective input and advice.

Here is what I have so far:
Insulate transmission tunnel -done
Install clutch slave hose
Driveshaft install
Wait on reaction and torsion bars until after engine install
Leave all mud shields off for access -done 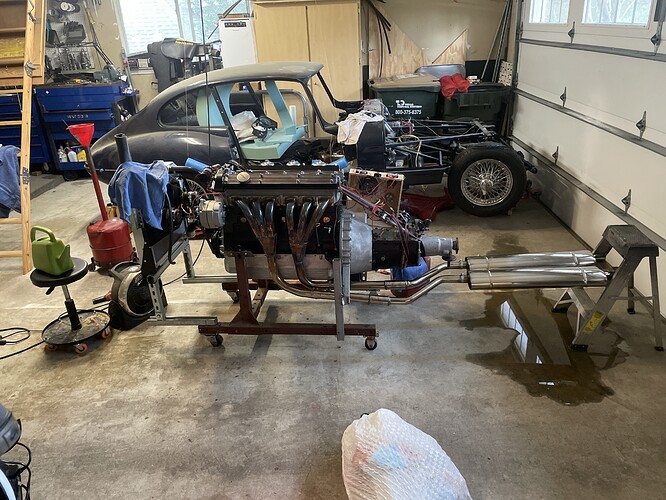 Here’s what mine looked like just prior to install: 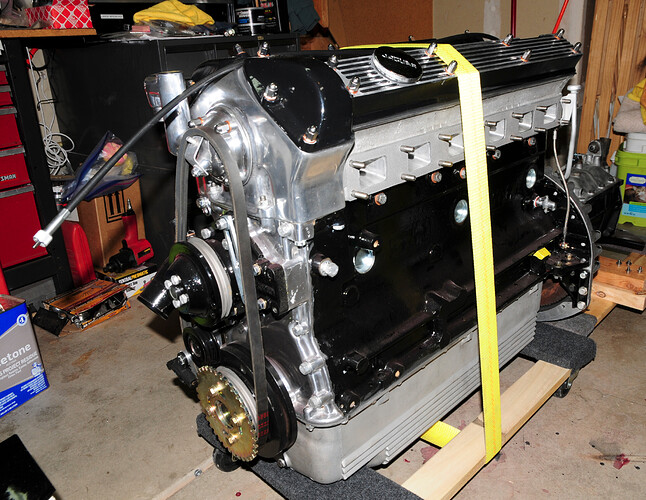 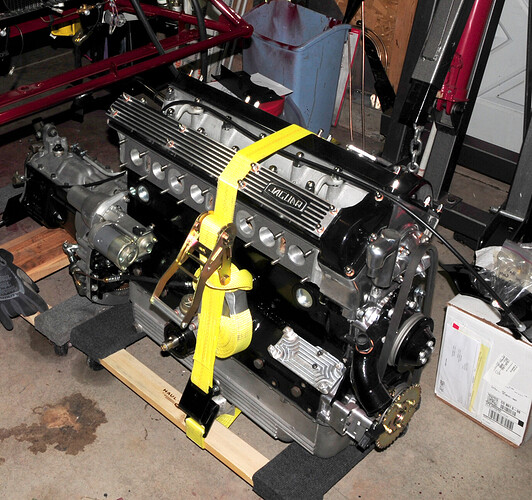 Note I had the speedo cable connected to the transmission before install. This setup worked with no issues.

Intake/exhaust manifolds: Also, It’s a good time to lengthen the wires for the reverse switch.

also, It’s a good time to lengthen the wires for the reverse switch.

Leave the exhaust manifolds on. They clear just fine.

Be very careful of the clutch hard line that passes next to the bellhousing. Make sure it is as tucked in as possible. I taped a small piece of scrap sheetmetal over it when I did mine. It is very easy to foul it against the bracket at the rear of the torsion bar and ruin the line.

Also it is easier to mount the stabilizer arm to the top of the bellhousing with the engine out and let it pass up through the bracket on the firewall then to try and put in the horizontal bolt with the engine in place. I did the latter and it involved some thrashing about to drive home.

Also it’s probably obvious but you’ll need to remove the front engine mount brackets entirely from the block. Then when the engine is in place, lift it up from the top a bit higher than its final position and reattach them so it can rest on the pads.

I just finished installing mine (for the third time) through the bottom. Some pictures are found here…
https://fabaclub.blogspot.com/ Scroll down to early April.
I sent you a PM if you want more images and comments.
Rob.

Be very careful of the clutch hard line that passes next to the bellhousing.

So I think you’re referring to the brake line? The clutch hard line passes over the engine/box assy and is attached to the firewall. 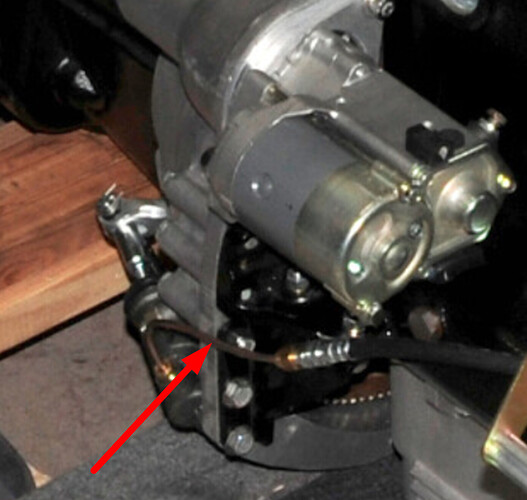 I just finished installing mine (for the third time) through the bottom. Some pictures are found here…
https://fabaclub.blogspot.com/

Well, it seems to have worked out okay - but it would not have been my first choice… 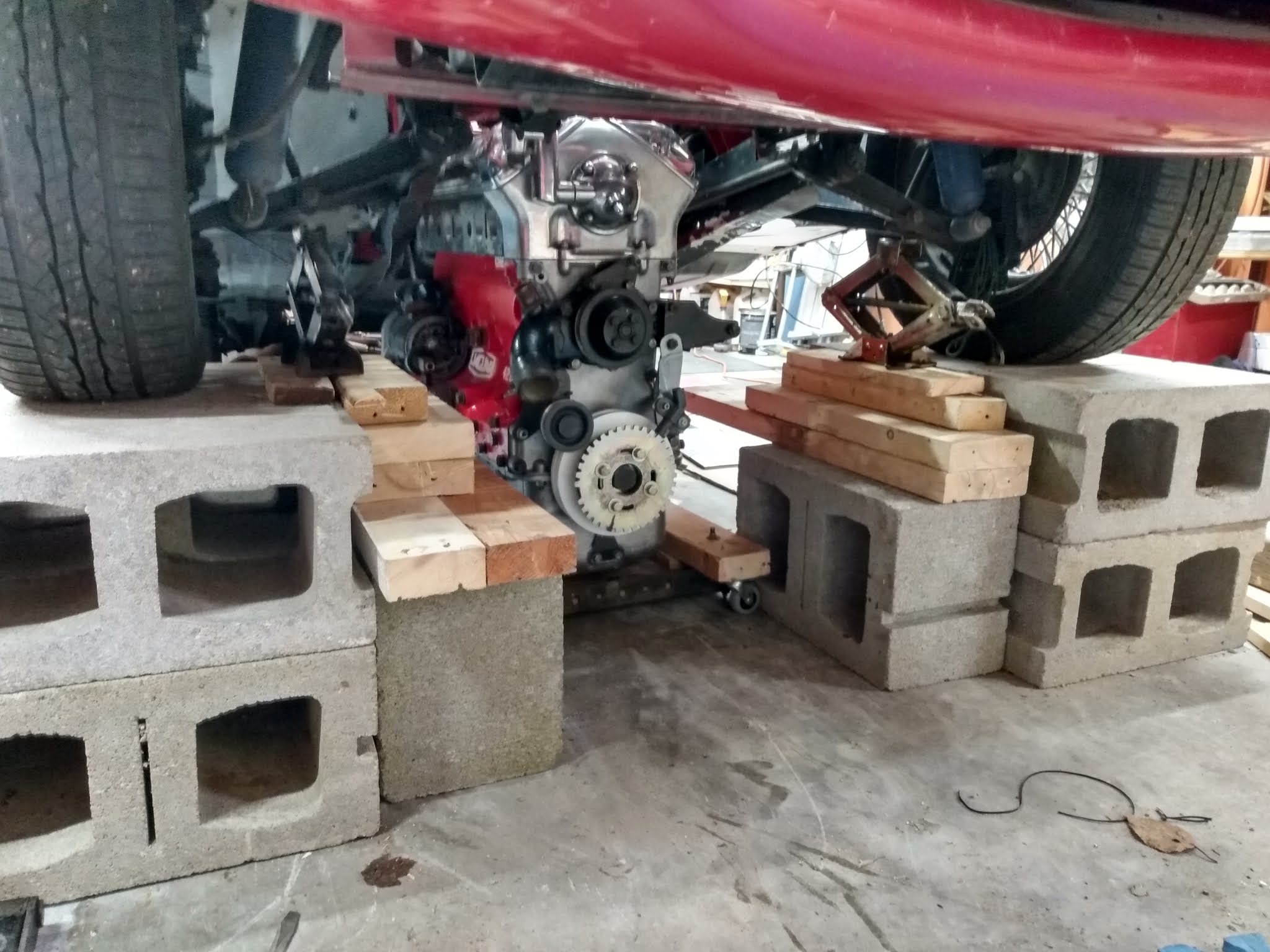 Is Fuel Injection in the master plan?

I finished the solo bottom reinstall in my car a couple months ago (transmission replacement). Pulling the head was actually easier than removing the carbs and manifolds…much improved access around the block. I also used cement blocks but only at the rear, and only one in order to stay within the lift range of the motorcycle jack. Lift tools included two small floor jacks, a motorcycle jack (HF), scissors transmission jack (HF), and an engine “cherry picker”. A well built steel creeper provided a little extra clearance for rolling the assembly into position (versus the motorcycle jack). The cherry picker was used to lift the front of the car, transfer the engine/gearbox from the creeper to the motorcycle jack, and remove replace the head. The assembly was lowered and raised into position with the motorcycle jack. A few photos (not in order)… 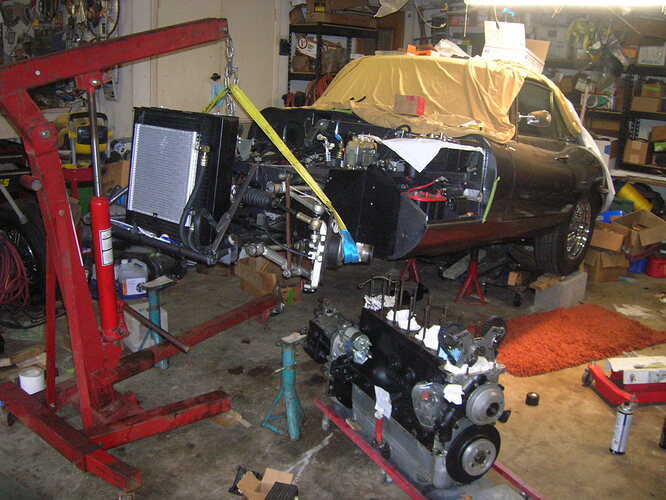 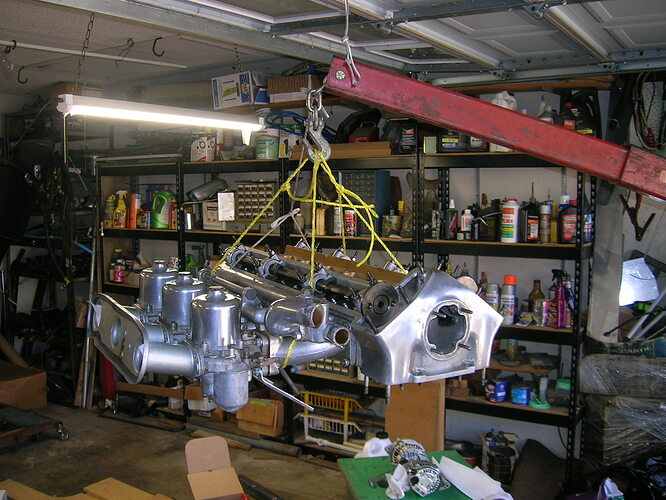 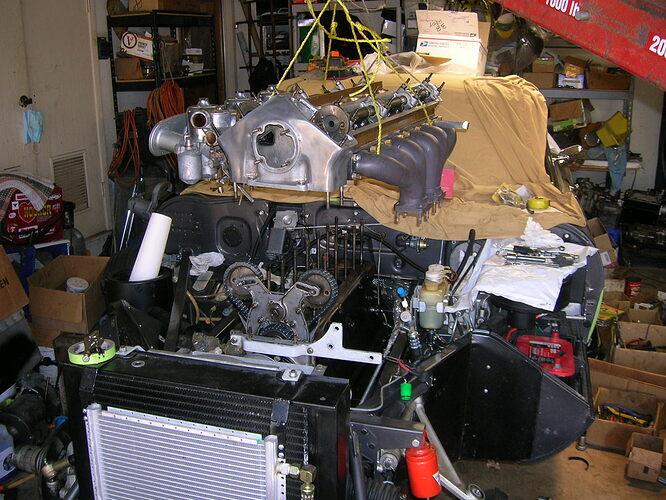 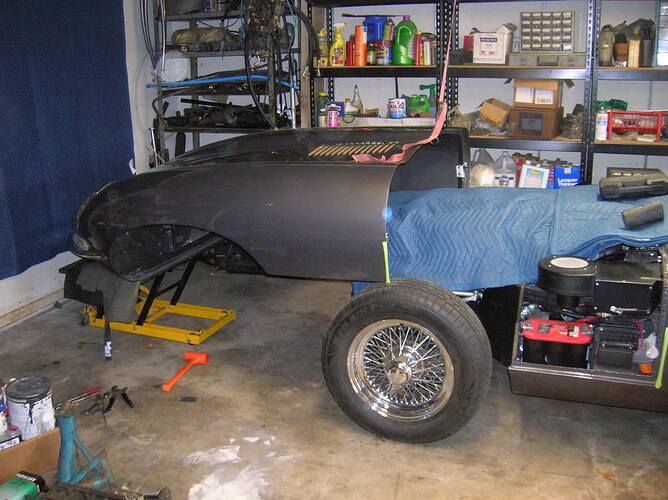 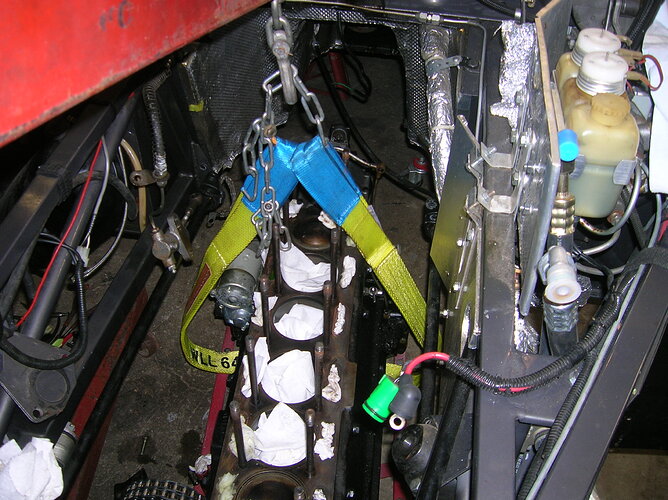 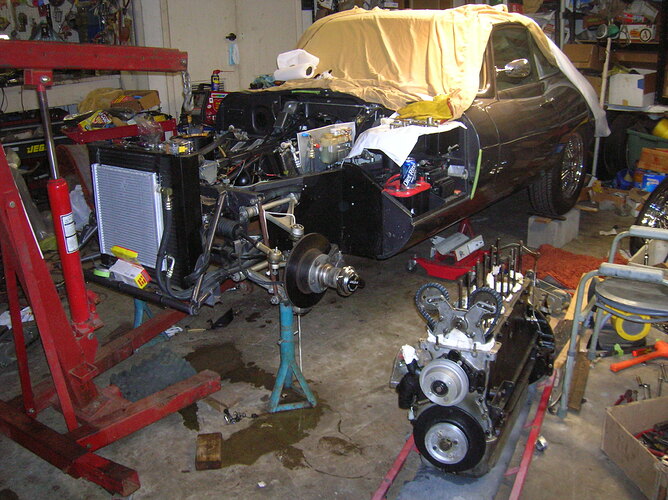 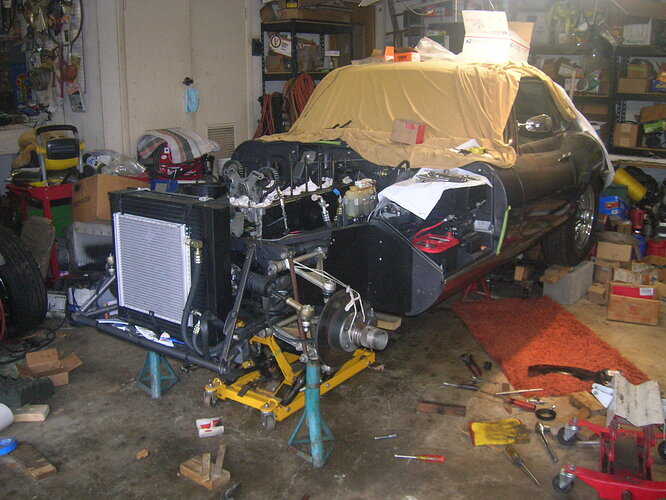 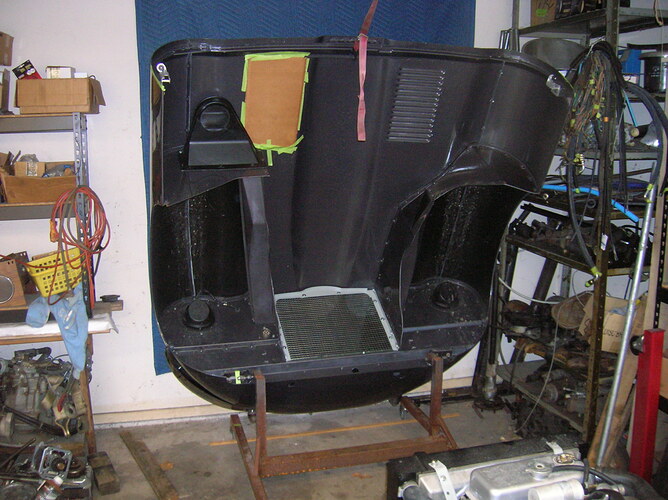 Dino- No FI in the plan for now. I’ll see how the Strombergs with modified intake and Curto adjustable jets work for now. I do have Ray’s EDIS driven by the MegaJolt system and Lambda sensors in the exhaust so converting to FI wouldn’t be as difficult as starting from scratch. 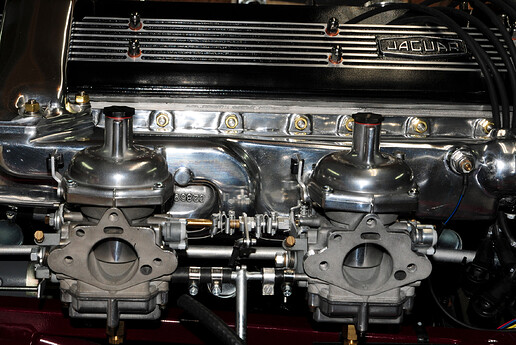 Hollow formed concrete blocks should never be used to support weight in the manner shown in this picture. They can and do fail spectacularly when used to support a point load especially when placed on their sides. Solid wooden blocks are a much safer choice. This is not a criticism, just a safety comment from someone who has seen it happen.

I really like the idea of putting the head/carbs/manifolds in as a separate complete assy, after the block is in place!

Looks like Bob has scissors jacks as safety backup, and I had jack stands under the framework ahead of the wheels. I also used a piece of stiff wood laminate between the tires and the block to distribute the load. I’m certainly aware of the failure mode.

Do I need to drain oil out of engine, or just remove the oil filter housing? Not sure how much oil is sitting above the filter housing and I don’t want to make a mess.

You can leave oil in engine sump but filter has to come off.
Dennis

Hollow formed concrete blocks should never be used to support weight in the manner shown in this picture. They can and do fail spectacularly when used to support a point load especially

Having studied architecture I have to say I agree. Just as with hollow bricks, you should use them piled so that the holes are vertical, that is in the direction of the load and preferably so that there is something (plywood, chipboard) that spreads the load horizontally. In a wall mortar does that, as well as any cast horizontal concrete etc.

What you do not want is a point load on the side of the hole on any if those blocks, even if you think they are strong.

Not sure how much oil is sitting above the filter housing and I don’t want to make a mess.

There is lot of oil above it if it’s been running. The cams are covered in it, but there is no real way for it to come out that way. Even if the engine is tipped, it will run out the back or the front of the head, straight down into the sump. It can’t back up through the filter housing. I mean you’ll need a drain pan when you take it off, but it won’t be quarts dripping out just drops.