Engine seems to be blocked

Hi,
My XJ12 2 series is in trouble.Every month if i don’t drive it, i run the engine for some minutes until oil pressure and coolant temperature is ok then shut down. Last time I’ve done it was ok. Then after a month I try to restart the engine, engine started but with a big noise like “clac clac” coming from the B Bank ( driver side on a LHD). It was so noisy I stopped it immediately. Looking around nothing apparent like belt or exhaust pipe. I tried a second time shortly with somebody else looking but we can see nothing. When i want to try another time the starter did’nt want to move the engine. I removed all plug, and try to move the crankshaft turning the bolt with a big wrench and it was blocked. I tried another time today, it is only moving 1/8 turn back and forward not more.
What do you think of that? Tensioner broken blocking the gear? Valve dropped in th B bank? What else? What other test can i do beofre dismantling?I Know there is probably a big job in front of me, but a good diagnostic could help me not dismantling to much? Thanks for your answer, ideas

Every month if i don’t drive it, i run the engine for some minutes until oil pressure and coolant temperature is ok then shut down. Last time I’ve done it was ok

Maybe a stuck valve. Fits in with the engine being mistreated. Now bent and not closing, it is hit by the piston. Remove the plugs and look in, or do a compression test. Don’t crank it with the starter any more. Turn by hand and stop if the resistance is too high - to turn by hand you might have to remove all the plugs or take breaks.

Then remove cam covers and check for a stuck valve as David suggests.

It sounds a bit grim though … good luck !

Sorry but I’m going for a dropped valve.

Scary stuff… when a similar thing happens to me I had the car in the shed so I rolled it on to the hoist and lifted. Because of the initial rattle followed by apparent seizure I went for the starter motor flywheel engagement. I took off the cover at the bottom of the fly wheel and using the fibre optic scope could see the thrust gear jammed on top of the fly wheel gear…. Using a long spade screwdriver and a Hammer freed the two. I figured this jamming could have been caused by a sticky return spring or slide on the starter motor shaft i squired in lots of WD40 and crossed my fingers. That was 3 years ago and it has never happened again. Hope you can get out of jail that easy too.

Hand turning engine, which way? If you turn it backwards, doesn’t that mess up the chain tensioner?

I think you will at least have to remove the B bank cam cover, which means removing the intake manifold. Not hard to do but I would order the gaskets first. Once off, you can check the chain and see if anything in the valve train is broken. My impression is it sounds serious, so I wouldn’t try too hard to turn the engine.
Good Luck!
Tony H

Most likely has dropped a valve seat which the piston is hitting keeping the engine from turning over. Rather common on the early V12 engines. Hopefully it is not to badly damaged but it is a head off repair and get all of the seats locked into place. If one drops, the others are not far behind. The clac clac noise before it locked up is the clue. When you pull the cam cover, you should see the tappet down a bit with a whole lot of valve clearance on the appropriate valve.

If removing the cover is so easy extreme clearance can also show a bent valve.

thanks to everybody for your answers. I will remove camcover B bank and let you know 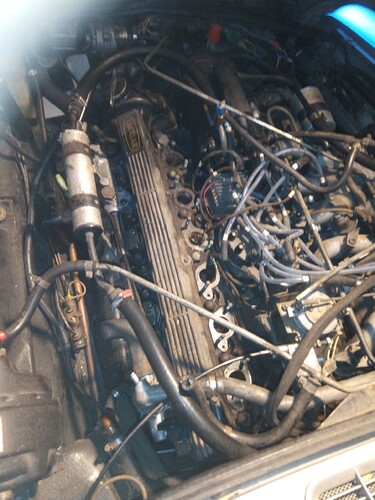 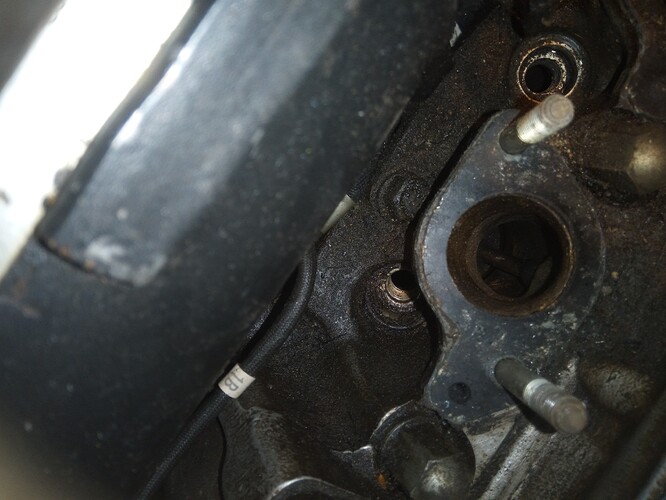 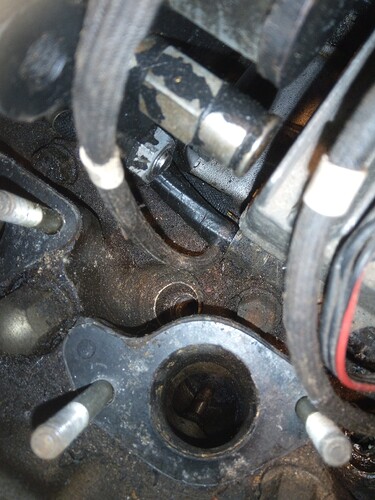 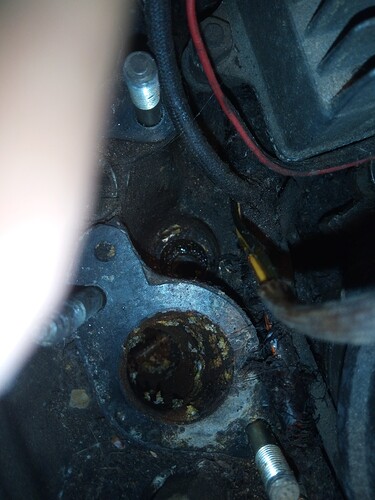 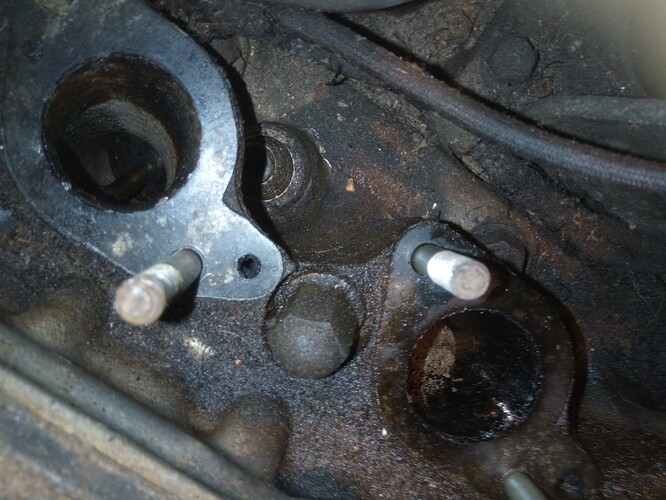 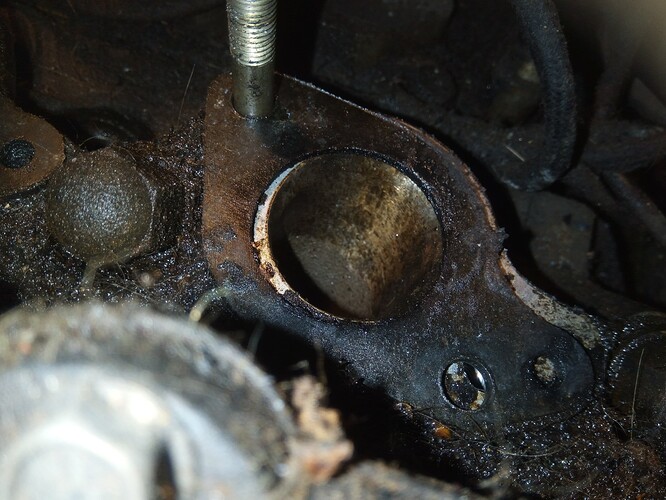 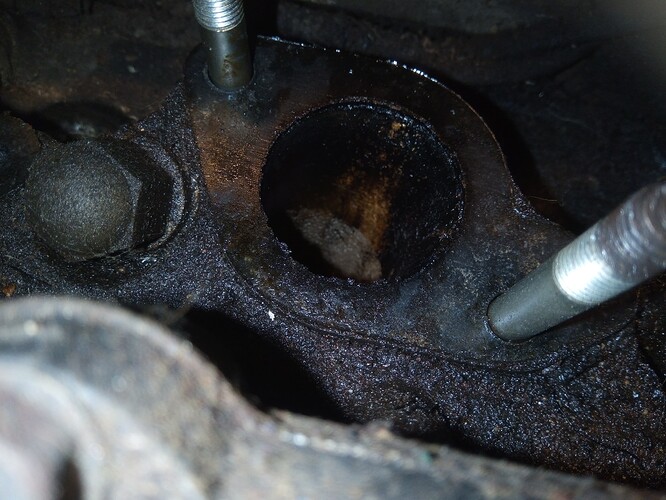 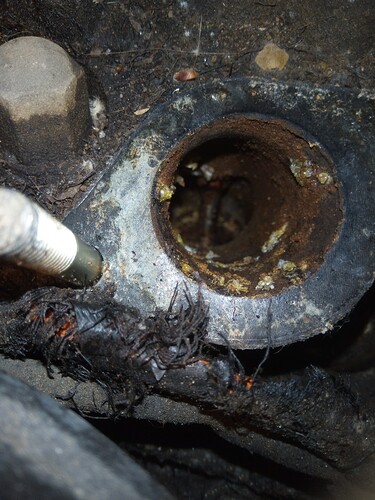 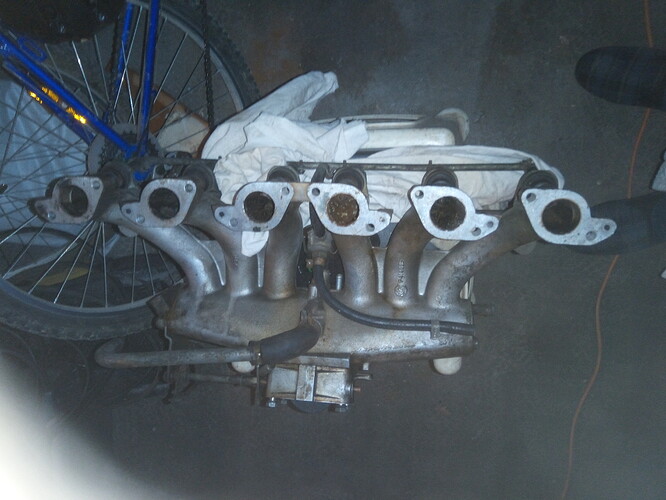 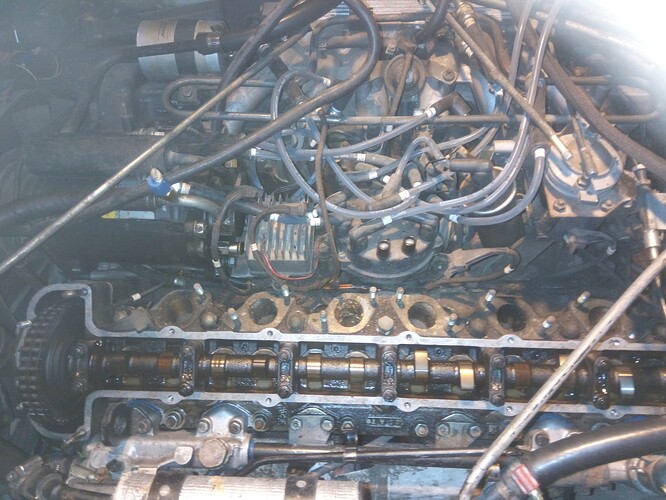 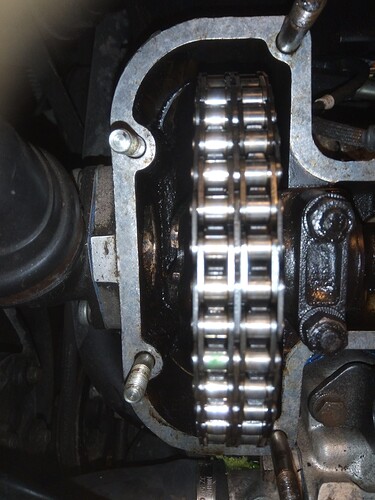 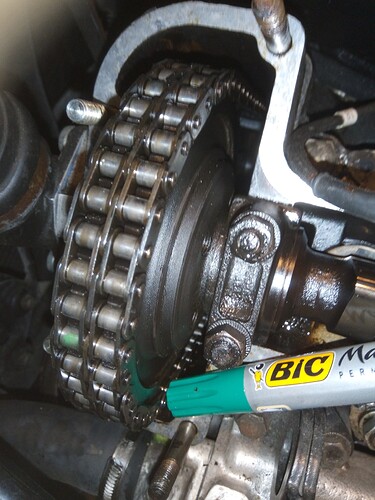 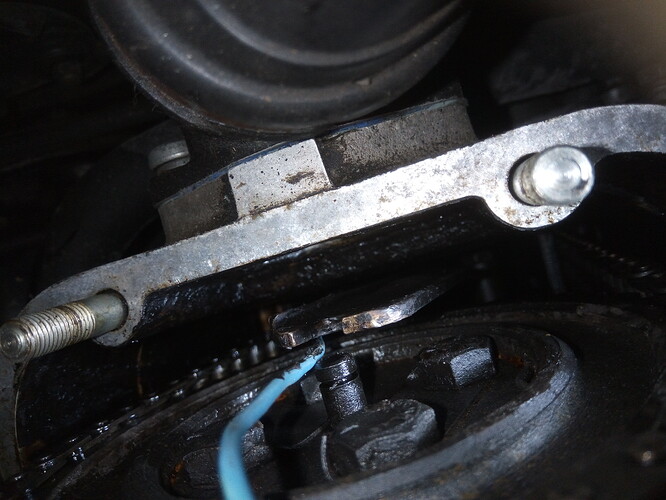 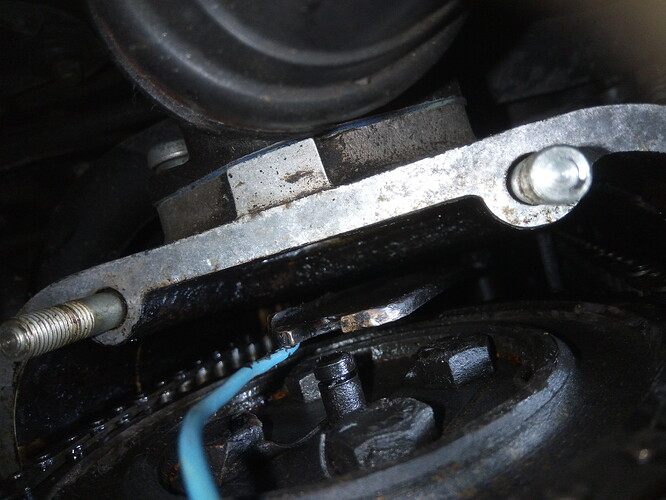 question: do you think I can remove the cam shaft in that position which is not TDC to have a better look on the valve motion

You initially said that you can only rotate the engine a little bit in EACH direction. If it were a dropped valve you should be able to move it quite a ways in each direction before the piston hits TDC and stops. I think a jammed timing chain is more probable.

Might be a bit late now but to exclude a jammed starter motor gear … just turn the key and if you hear that “clack” as it engages and then you know it’s not that.

Looking at the chain, seemed to be loose on the side shown by the pencil. Testing with the finger, it is completely loose, but not possible to pull it out.
My idea is tensioner broken and probably jamed with chain and sprocket somewhere??

Your chain is loose, there is something very wrong with the chain tensioner.
Before going deeper onto the heads I would take the front engine cover off and investigate that.

Might be a bit late now but to exclude a jammed starter motor gear … just turn the key and if you hear that “clack” as it engages and then you know it’s not that.

If the chain is jammed, it might do more harm than good…

I think what the starter would have damaged is broken already but I don’t want to bear the guilt of having advised cranking. A brief pulse might be okay but not conclusive. If Aristides is right don’t risk it. I’d say this engine would benefit from a little overhaul and it’s cold outside so no better time for it

If you turn it backwards, doesn’t that mess up the chain tensioner?

You don’t want to turn this engine over on the starter or turn it backwards. This is because the timing chain is loose and you have told us you have rotated the engine backwards. That means the crank and camshafts are not necessarily going to be lined up with each other any more.

So long as the engine was never turned backwards, it would still have been timed correctly. Once you turn it backwards, that is not so. This is because the timing starts at the crank, then pulls the Bbank camshaft, then the loose jackshaft, then the Abank, regardless of chain tension. Turning it backwards without tension turns the crank, then it turns nothing but the crank until the slack is eventually taken up at the Abank, then everything turns but in the meantime, the crank has been moving when the camshafts weren’t. That is consistent with your saying the side with the pencil has no tension. There should always be tension between the crank and Bcamshaft and if I read your post correctly, there is not.

The original clacking may have been caused by a broken chain tensioner. You can deduce that by looking through the tensioner plug hole and cross referencing that with photos in one of my earlier posts on timing chain tensioners and also my old photo albums for pictures of what you should expect to see under the timing cover.

Even if it were just a broken tensioner, the fact that it is now locked points to much more serious trouble. The noise a broken tensioner makes is more like a metallic rattling when and if the rpm drops rapidly. Clacking is different to that.

B bank air intake removed. Nothing apparently to bad, no sign of head gasket leak on this side. 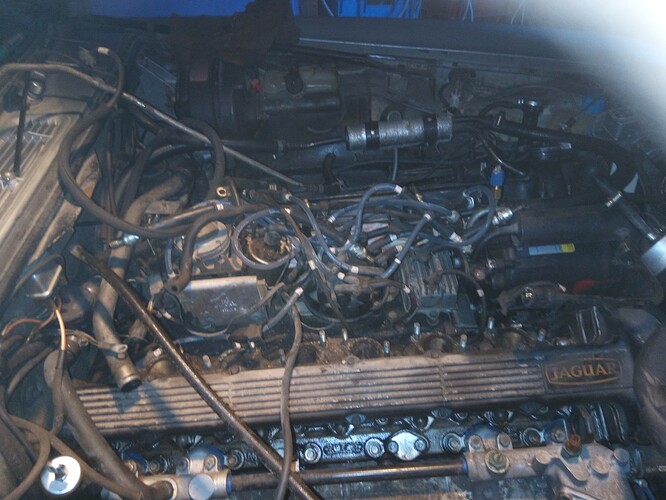 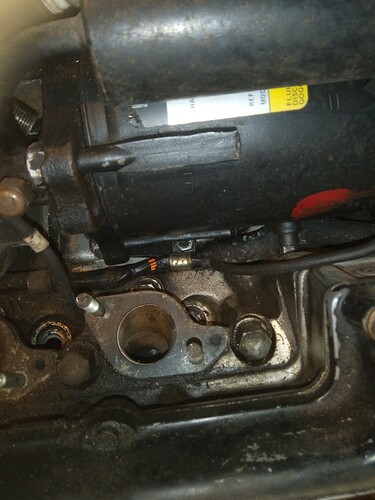 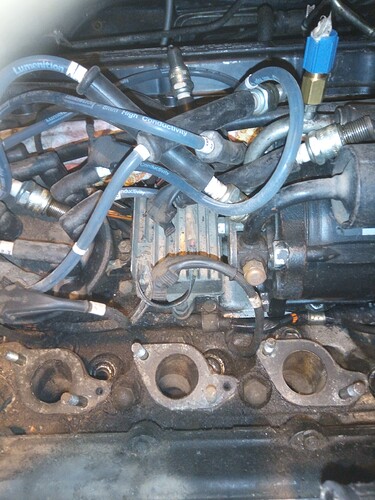 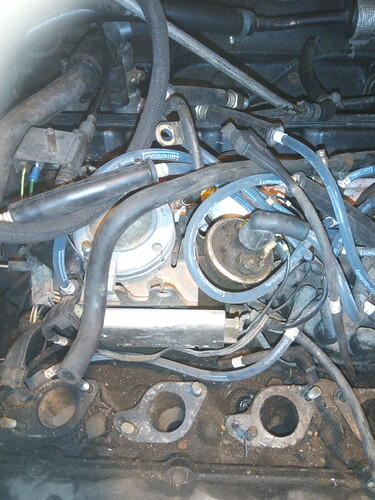 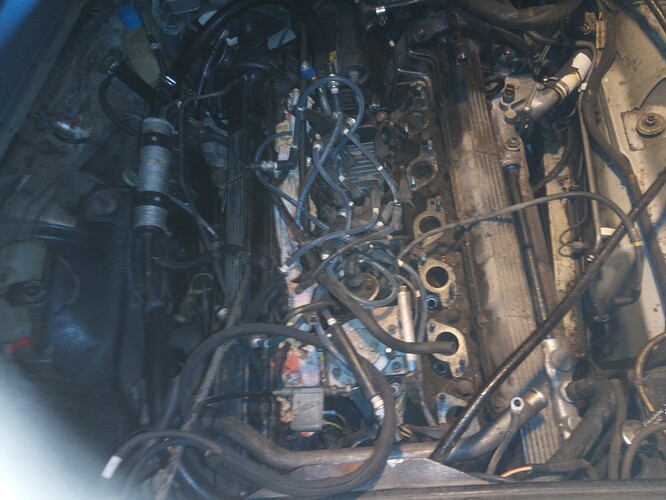 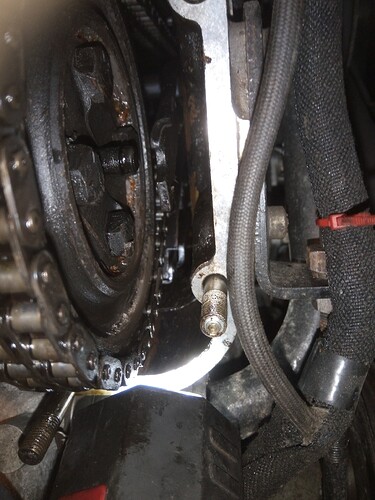 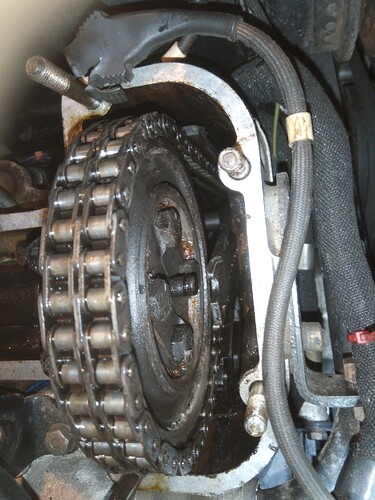 IMG_20230122_183746_313072×4096 823 KB
Cam cover removed. From above you can see the highest part of the tensioner and the plastic part doing the U and pushing the chain ( not evident on the photo). Seems the tensioner is in place and not broken on this side. Tension of the chain is correct on both sides of the sprocket.
I’m waiting for the endoscope.
Broken chain jammed under the crank??
next page →