I’m beginning to rebuild a 3.8 XK engine and am wondering about the best engine stand to use. The type I’ve always used in the past for American V8’s, i.e. the rotisserie type, strikes me as perhaps not suitable for the rather long and heavy XK motor. I worry about the engine cantilevered with it’s cg quite a distance from the stand mounting points.

Am I being overly concerned here or perhaps I should just use the conventional rotisserie stand and be done with it.

Any suggestions would be helpful. Thanks,

You might think about conventional, but see if you can find one with the forward legs that will extend- that way you’re controlling the cantilever factor. If none available, make or get some square tubing that will do the same thing, i.e. roll the front legs up inside it - same result.

You’re anticipating something that nearly happened to me, when I was rebuilding the V12 I came within a whisker of dropping the complete ready-to-install engine precisely as you describe. But I cheated death. And, yes, I was using a standard off-the-shelf rotisserie for the American V8.

Mike,
thanks for the reply. Sounds like you are talking about the possibility of the engine and stand tipping forward which is one of the problems. I’m also thinking about the strength of the bolted joints at the rear of the motor. Typically the engine stands attach at 4 points and I worry about the top two failing. Either way I’ll look around for a stand that offers some support at the front end.

Yes, the whole thing tried very hard to pitch forward as I was rolling it around the garage. I think one of the wheels caught on something and the momentum tipped the stand and motor forward- I was able to recover it before it got away from me, but only just.

I’m also thinking about the strength of the bolted joints at the rear of the motor. Typically the engine stands attach at 4 points and I worry about the top two failing. Either way I’ll look around for a stand that offers some support at the front end.

Yes, you should probably devise some kind of front-edge support, perhaps rough-cut some 2x6 or something that would prop the motor up where it would normally sit in the engine mounts? Then attach the bottoms to a cross-piece that stretches between the two legs - although this will preclude the rotisserie action. I had no problems with the bolts - but you need to make double sure you have grade-8 and some appropriate size washers.

Here are some pics of me mounting my block and the block in position. I had concerns about stability as the weight increased with more parts being added on assembling but it stayed very stable throughout. 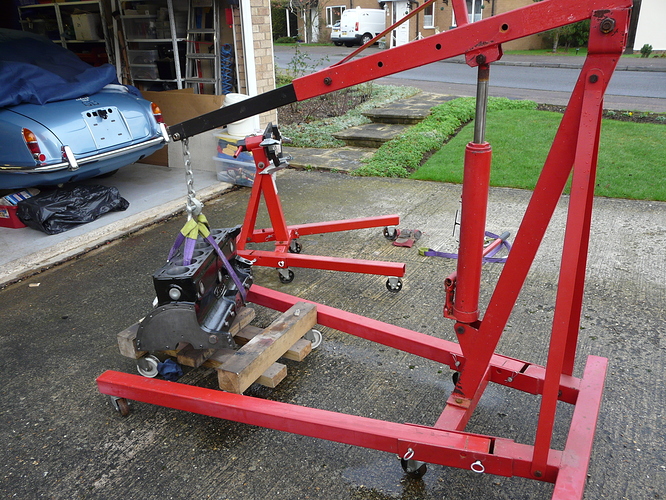 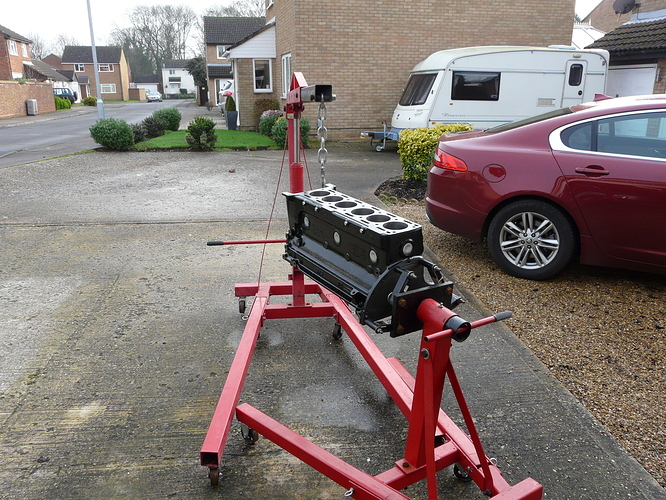 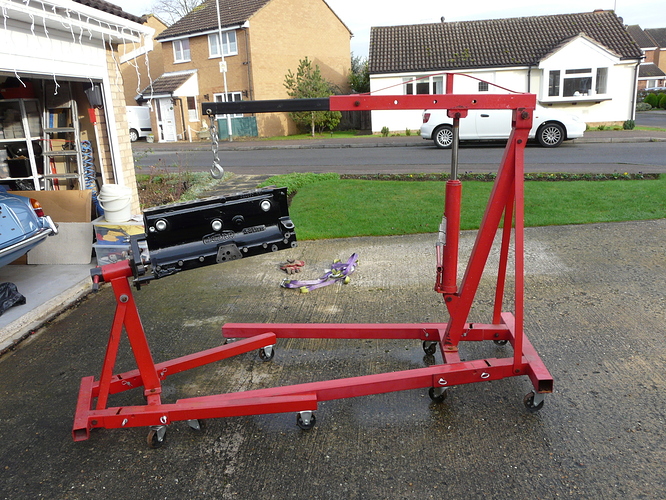 At minimum it must be four wheels, not three. Three is ok for 4 cylinder MGs.
I use a 4 wheel stand from Harbor Freight rated for 1000 pounds. I never rotate it with the head on. I finish the bottom end work first, then rotate, then do the head work. Here is my Mark V engine before disassembly. 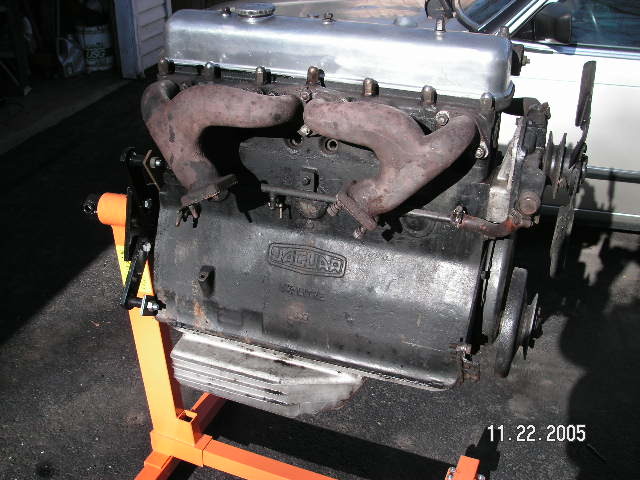 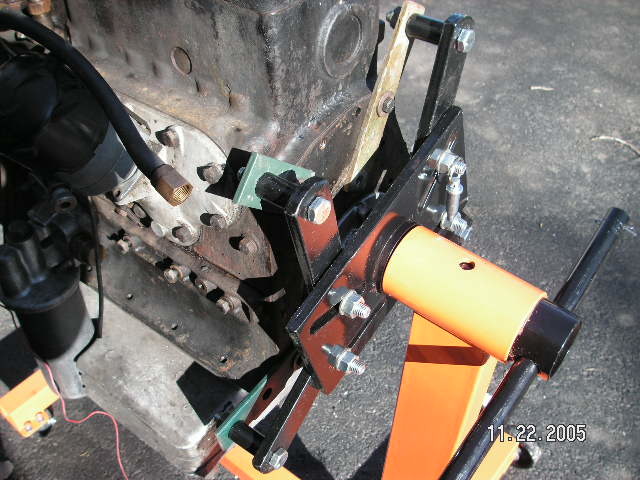 Kenny’s stand is rated for 2000 pounds, obviously better if you have the budget for it. Since doing my Mark V I have acquired one, but have not used it yet.

Thanks to all of you for the good information. I now see what direction I need to take, both for my safety and the well being of the motor;-)

I once had a mishap with a Rover 2000 engine while using an engine hoist. I forgot to insert a safety bolt through a chain link. While the engine was suspended a few feet from the ground the chain slipped out of the slot in the hoist arm and the motorcame crashing to the ground. It shattered the cast aluminum oil pan and broke off the water pump. Thankfully neither my friend or I were injured but it was a scare. Ever since that time I’ve been very cautious and pay close attention to what I’m doing.

Upgrade the bolts that mount the engine to the stand to grade 8 versus the grade 5 or less that will come with the stand for a bit of added assurance. I have used even the summit racing 1000lb one for a Jeep 4.0/4.2 stroker that I built and that worked fine. Block weighs roughly about the same as a jag motor and with a cast head, heavy crank etc and it was fine.

That said, when a 2000lbs one only costs $50-100 more it is not bad insurance to have. Keep your eye out on craigslist, they come up pretty often.

Thanks Matt, and as it turns out a 2000 lb capacity stand did turn up on the local Craigslist. I’ve put in a call to the seller and waiting for a response.

Nice. Fingers crossed. I have gotten in the mode over the last several years that unless it is a super specialty tool, I almost never buy new anymore. You can generally find a far superior quality one for a ton cheaper. Especially if you know how to haggle a bit, there are tons of steals to be had out there.

As you are looking to do you engine rebuild too, if you need things like torque wrenches… don’t go buy a craftsman or anything. You can go pick up an actual CDI (Snap-ons torque wrench line) for pennies sometimes. Even if you don’t have it calibrated it will still be infinitely more accurate than a cheap one new and calibration is not hugely expensive either.

I got mine off e-bay £40 inc post new , XK engine was well in the limit of the stand , but no way would the stand take the engine as it was , so got a £25 refund , the problem was the bolts , moving in the holes , so I pulled the main stem back a little , then welded the joints up , added some strength , the stand is fit for purpose now , the bit of wood at the front is there just as a temp support , have moved the block on the stand a good 20 ft out side to pressure wash the water ways , twice , before fitting new core plugs , engine is a 3.8 project , 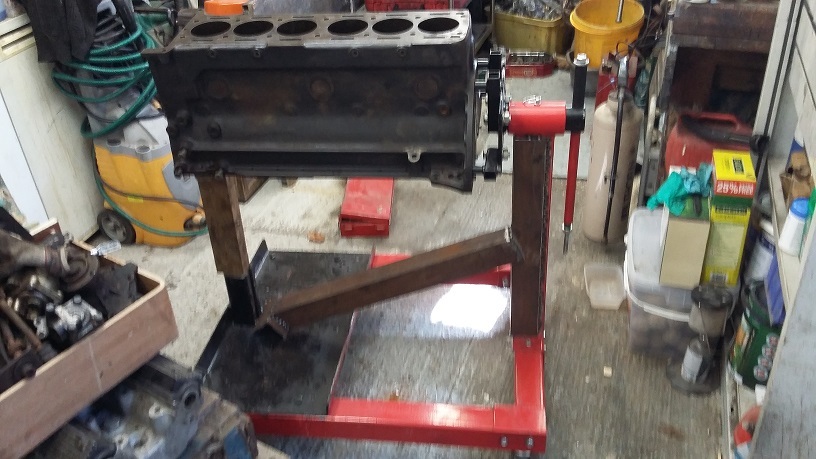