I recently replaced the bumpers on my coupe and during the process, I noticed red overspray coated on the mufflers.

That far back, paint often does not burn off: as close the engine as the picture shows? It’ll be gone in 10 minutes!

I used an aluminized spray can on the down pipes of my lump. it has remained the same color. Never got to do the rest of the new pipes from the down pipes back to the original jaguar mufflers. Lat time I was down and under. No rust, Still mild steel. No SS used…

Drat, I wanted to take the jaguar to market this AM. Days of inactivity. Not quite enough voltage to crank. Merely lights on and loud relay clicks… It is on the smart charger. but, sop is the foul weather !!!

Your cold’s not enough to defeat a good battery: sure your battery isnt just shot?

it’l burn off with the first fire up.

purely for appearance, I think it will offer an improvement and cant see anything against it

(other than a couple of hrs prep)

Paul:
For sure. even the night temps are far from being the low volts reason.

The battery is probably marginal. But, when the car is used regularly, it is fine.

At times days of no start and it is fine and fires right up. and at others not quite.

I suspect an additional complication is an intermittent drain. More than the TC, radio and PCM.

I’ll check ;later. It got a good log charge.
But, not over night. Touchy about unattended electrics…

Today I reached another major milestone in my engine transplant project. I completed all of the engine bay restoration and painting and today I installed the donor engine into my 1984 XJ6 Vanden Plas.

Things went very smoothly with the engine installation but I still have a lot of restored parts to install before I will be ready to start the car up and drive it. The first three pictures show how the restored engine bay looked right before I installed the engine. The fourth picture shows me lifting the donor engine off of my engine test stand with my engine hoist. The fifth picture shows the engine as I am placing it in the engine bay and the final picture shows the engine in the engine bay after I tightened up the nuts on the engine mounts securing it into place The rear of the transmission is temporarily being supported by my transmission jack until tomorrow when I plan connect the propeller shaft, install the transmission mount, and start installing all the rest of the parts that I have cleaned, polished, painted or replaced. 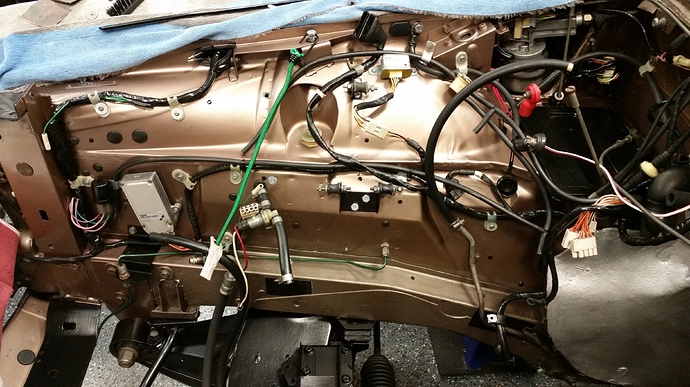 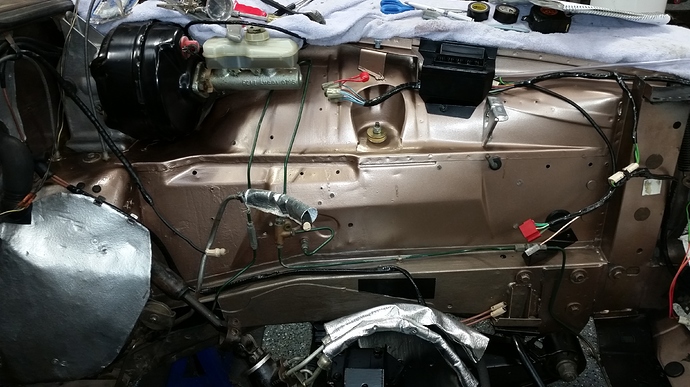 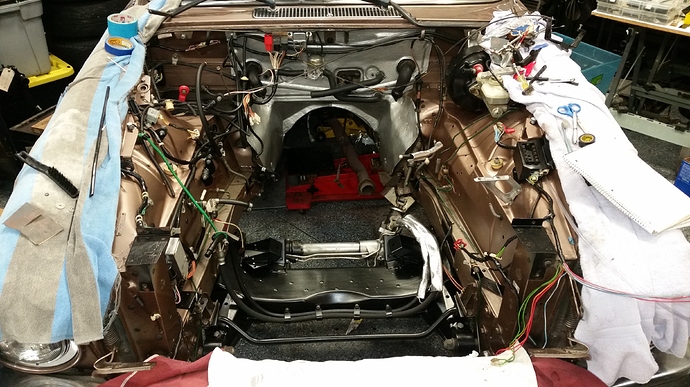 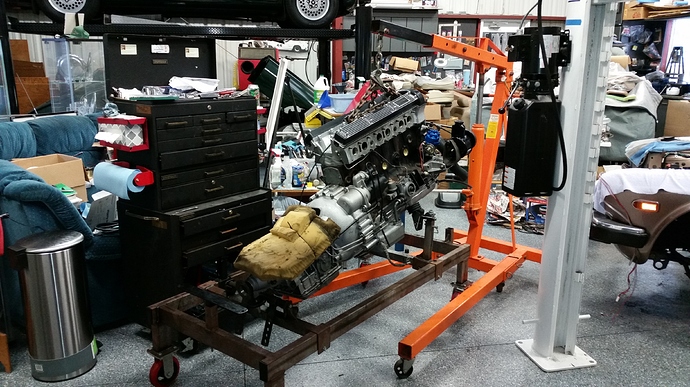 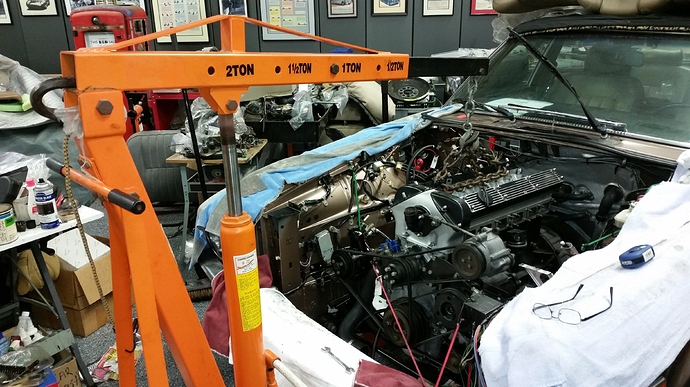 Aristides,
Thanks. I can’t wait to get the engine running and this car back on the road.

Very nice Paul. I like the workshop you seem to have too. Is that a vintage gas pump in the background?

Are you using the standard FI intake? That’ll be fun, gettin’ all the bottom nuts on, in situ!

Looks GREAT! I wont go to the huge lengths you have, in making the engine look nearly perfect, for my Jeepster, but I cannot wait to get mine somewhat cleaned up.

Are you keeping the air pump?

Are you using the standard FI intake? That’ll be fun, gettin’ all the bottom nuts on, in situ!

It’s not all that bad, actually. You just reach underneath and work by feel. Gotta hold your tongue just the right way, though

Beautiful work, Paul. My hat’s off to you !

You just reach underneath and work by feel.

A position my shot shoulders reeeeeally dont like, no mo’!

Just another reason I have to work on cars, in 2-hour blocks.

I add my compliments. Almost think it is too pretty to drive??? Just kidding., I know you will drive it. a lot!!!:

I did a bit f cleaning on mine when the engine swap took place. All clean, and a lot painted in the bay . . The engine came clean, so, it went in that way.
Nothing got polished!!!

Yup, I have the shoulder issue. that is how I deal with it. blocks of time at a whack then rest or defer…
A PT gave me some help. Excercises. Sleep positions. And “straighten up”. shoulders back. It works!!! As good as new? No. Much better, oh yeah… when all go ugh, an Aleve fixes 'em for a day.

Andy,
Yes, that is a vintage 1950s or so gas pump in one of the pictures. Here is another picture of the inside of my garage showing some of the posters, paintings, and other items I have on display. It is first a working garage for me and our five Jaguars, but it is also a bit of a hangout and entertaining space. It is quite a mess today with my ongoing engine swap, but it has looked this neat once or twice. 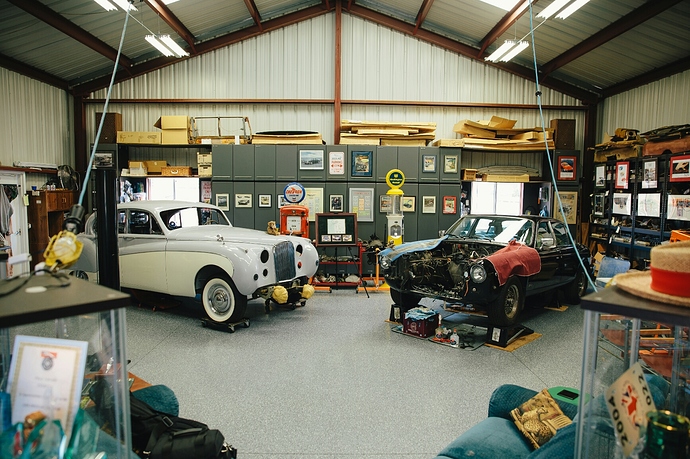 Rob,
Thanks.
I live in California, USA and cars built in 1976 and newer are required to have an emissions test every two years. The test includes a visual inspection to verify that all the original emissions equipment is properly installed and an analysis of exhaust gas emissions to ensure that they don’t exceed standards. If I removed any of the emissions equipment, including the air pump, the car would not pass the inspection and I would be unable to register the vehicle in CA even if the exhaust gases met requirements.

Paul,
I agree with Doug (I usually do) that getting to the lower intake manifold nuts is not too bad. I have removed and replaced Series III XJ6 intake manifolds several times now due to cylinder head work or engine replacement. I am fortunate that I can still get around quite well. I can easily reach most of the lower intake manifold nuts by reaching under from the front or rear, although one or two of the nuts usually prove to be a challenge. I will properly tighten all the nuts I can now. When I get the car running I will drive it up on my lift where I can reach them from underneath for a final tightening.

Here is another picture of the inside of my garage showing some of the posters, paintings, and other items I have on display

With display cases, and big, comfy chairs, to boot!!!

Doug,
Thanks. But please hold onto your hat for now.

As the ancient philosopher Yogi Berra said, “It ain’t over til it’s over”.

I still need to get the car running, pass the CA smog test (it is due in March), and get the A/C blowing cold again.

Looks like a lot of long days out in my garage for now.