OK, Ok, Ok, I broke my own rule today. I went with the
Extra octane gas today as I was running low and getting
Lazy to drive around looking for a Shell gas station.
The only problem is it has a percentage of ethanol. Not
Sure if we were ever conclusive whether or not the
Ethanol is / was detrimental to the mighty fine 5.3 litre
V-12 engines designed at some point in the 1950’s with
All that perishable rubber and seals.
Anyway back to my story, I think this crazy octane stuff
Seems to give the ole girl an extra step in her stride.
Seems to run fairly well, or else I’m imagining things. 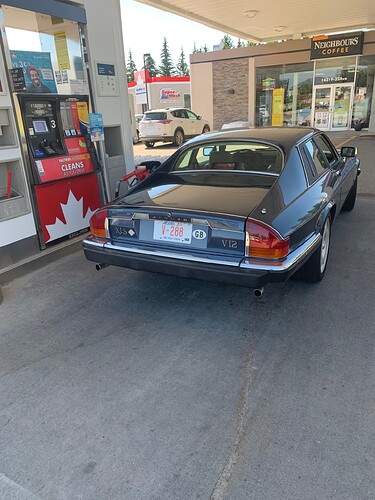 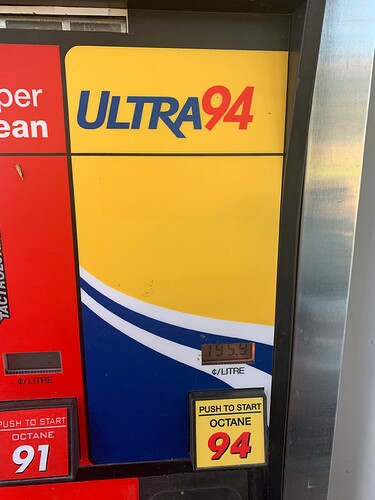 I thought ALL Jags were “designed to run on premium fuel only” ?

Since regular octane has been so damn high of late

, it has probably been a year or maybe even two since I ran anything other than regular in her (Superblue). Put premium octane in her now and she’d likely explode …

I’ve run premium with about 10% ethanol, which I think is pretty typical in Arizona, from day one in my XJS.
It sometimes sits for weeks without being driven or started, I’ve never had any ethanol related problems. I have the low octane jumper on the Marelli ignition removed, so it is getting all the timing that the factory Marelli ECU allows.
Your mileage may vary.
Bob

btw, if worried about ethanol deposits, best stuff I have found to get rid of it is that blue Star Tron stuff, sold at WM, Pep Boys, etc. I put about 1/4 of a bottle in Superblue every few months. It doesn’t actually claim it removes ethanol (deposits), since apparently no product can do that. What it does do is somehow break them down molecularly so that they then are able to be carried out of the system along with the rest of fuel to the exhaust, or some such …

Do you guys have 94 octane? This was a normal pump
Before and now it’s 94? Is it just an octane booster they add somehow?

Experiences vary a lot. Lots of variables. And I’ve become pretty well convinced that additive packages and the actual amount of ethanol content play a part in this.

By the way Bob, change of subject, how’s that 5 speed
Working out and running for you?

94 is not common but can be found. As can zero ethanol “clear gas” in rural areas. Octane is managed at the refinery via the blending process.

I hear you, I haven’t driven the XJ-S for a while. Been sitting in the garage. I wonder sometimes why it sits there. But anyway
We’re starting a heat wave up here. Just got back in town
From Jasper. (In the Rockies)I always try to do a shake down run on the
Hottest day of the year to ensure the radiator cooling system
Is holding up. On most days I cruise around about 1/4”
Below N. a hard run gets me to the lower part of N.
A hot day combined with a hard run like today, I’m in the middle of N. i think I’m good.

Based on this, I advanced my timing 4 degrees, and use 92 AKI US Premium. Been fine for three years. 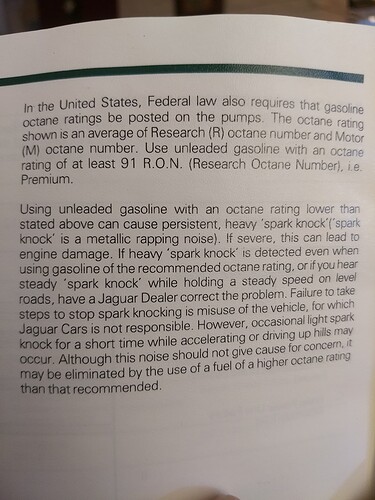 My Cat seems happy with 89, mid-grade fuel. strong noise-free response, no metallic clattering. I store it before winter with a full tank of ethanol-free gas, and the following spring the old girl really is happy to be on the road again. Then back to normal 89 for the rest of the season.

That is what’s important, if the ethanol gas sits too long. I happily use ethanol gas and run the car enough where I’m refilling half tank every week or two.

I always fill up before winter storage and run some StaBil additive. I hope it works. Otherwise, i like the idea of storing with ethanol free.

I’ve seen that stuff and I think it is something like 82 octane (?) and wondered if we could get away with it in our Jags. The sticker on the pump says it is for 2000 (?) MY and newer vehicles, IIRC …

Might look at Star Tron for that purpose (winter storage) too, Gregmatic … I think it’s the only fuel treatment I have seen that says it actually “revitalizes” old gas (up to one year old, or some such) … I’d put some in before storage and then add some (as well as a few gallons of fresh fuel) to it when you bring her out of hibernation …

Up here in the PNW E10 has been ubiquitous for a couple decades at least. Typically it’s offered in 87, 89, and 92 octane ratings.

It’s not necessary cheap in either the cost or quality sense as all the big names sell it: Shell, Union 76, etc. I’m sure you can find low-quality E10 gasoline but having ethanol, in and of itself, doesn’t relegate E10 into low-quality classification.

It takes some luck or effort to find non-E10 in these parts. There’s a station selling it just a couple miles from me, however. I never bother, to be honest. They charge an additional $1.00 per gallon and I can’t square the cost-v-benefit.

I’m not sure how MY2000 might be significant; I can’t think of any industry changes coinciding with that year. As far as I know all the major car manufacturers, including Jaguar, have OK’d E10 since at least the mid-1980s

You are thinking of E85, which is 85% ethanol, 15% gasoline. The car has to be designed or specially modified to run it. Yeah, its cheaper, but it better be, because gas mileage is awful. Ethanol has far less energy content than the same volume of gasoline.

Normal pump gas in the US is E10, unless you find a place that sells ethanol free gas. A few places may bump it up to E15, but i wouldn’t run it.

If I’m going to store a car for awhile, I put in ethanol free gasoline. It’s far more stable over time.