Exhaust headers are sandblasted. Now what?

This is a continuation of my prior topic about the a/c compressor heat shield which turned out into a Exhaust headers coatings convo.
One of my headers had developed a crack so after sourcing one on eBay I removed both and since I went through all this aggravation I’m looking for a coating that would both look pretty and keep temps in check, allowing me to leave heat shield out to display said pretty headers.
So far we’ve heard about graphite dry, aluminized paint, high temp powder coating, cerakote. I contacted Jethot and waiting on a quote, they have a lifetime warranty on their product. image|375x500 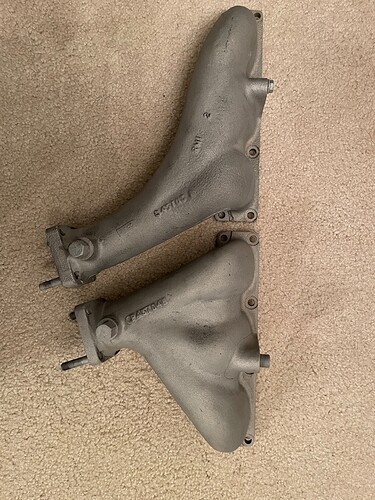 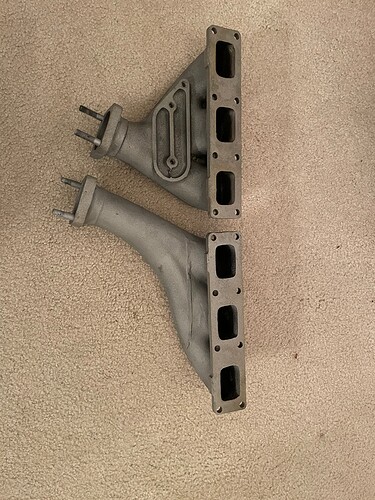 Well first off the manifolds look lovely spme people so a porcelain or ceramic coating which looks lovely, but if you plan on this beong a routine driver, the coating wiil flake off too quickly for the cash outlay.
There is exhaust manifold paint that looks great intil it doesnt. Yhe coates will last longer than the paint- which has been my experience.
So i gave up on both and use a spray graphite lubricant which leaves a nive flat medium dark gray. The graphite works as a nice rust inhibitor too. The beauty of the stuff is just reapply when it starts to wear off. The only prep is grease / pil removal. Heck it wiill even stick to that, but yhe finish leaves a bot to be desired.
Anway back to reapplying, the beauty is minmal effor to reapplying and it blends very nicely.

I love to look of the ceramic coatings, but for me becaise i drove my cars, the coating flakes or burns off too soon.

Thats my experiences on this topic.
Mark

Thanks Mark. And you drive your car without the heat shield installed without adverse consequences to the paint on the hood?

Umm no. I did put the heatshield back on Because the hole left after taking it off, I couldnt get a real good seal and the heatshield is kind of necessary to prevent the air con compressor from taking on anymore heat, and to help prevent the bonnet paint from heat checking. I did put a shine on the heatshield and shoot it with a high heat clear coat which discoloured.

So its polished again and left bare

There is another alternative to this too: if you take those blasted bare cast-iron manifolds, coat them liberally with ATF, then run it up to temperature–naturally outside, and away from easily upset neighbors–they will turn a very nice shade of bluish to about the same color cast iron as they are. That coating will remain on there fairly well, and cost very little to do.

Yes the ma ifokda look good under the once shiny heat shield. Yhe end resilt is a flat gray a bit darker than the bare cast iron. A mimimal amout of the graphite (lunricant spray not paint) gets absorbed into the cast iron which is what keeps rust at bay.

Wiggles solition with the automatic transmission fluid also works well. The burn off is a bit stinky so do it with the bonnet up and be prepares to wipe down the neighboring parts, because there is a light residue left from the burn off. The blue left behind is nice looking. I suppose you could apply the transmission fluid then heat the parts up evenly on a gas barbeque or something like that outside. Once the fluid is burns off youll want to wrap the parts up in a welding blanket or some nonflammable material and let the manifolds cool evenly and slowly to prevent cracking.

My 2 cents worth.
Mark

I’m looking for a coating that would both look pretty and keep temps in check, allowing me to leave heat shield out to display said pretty headers.

**
The headers get red hot, Francois - they are cooled by radiation and air flow. The coating, unless plain insulation, will make no difference to heat generated and radiated - hence the heat shield…

Oh and you might want to make sure the surfaces mate well. i do this ny bluing with machinist dye. Or a sharpie works too. I do this to ensure the two surfaces mate well to prevent a exhaust leak. I never count on the gasket to take up the slack in an improper fit up. Remember this stuff is old and has gone through a bazillion heat cycles and the nuts may not have been torqued to spec or more likely lost their torque over the years (i know i have). It doesnt take long and its beter to deal with it now rather than when its all together and the exhaust leaks.

The only way to reduce the manifold heat is to wrap in exhaust wrap. Which on the OE manifolds, good luck on getting a proper wrap. This stuff is made for headers and not OE cast log manifolds actually don’t because there is no way you’ll get a proper wrap. This will create uneven cooling which is a great way to crack or break a cast iron manofold.

The only way to reduce the manifold heat is to wrap in exhaust wrap.

Yeah, but it looks terrible.

What would happen if you just applied Ospho to the manifolds?

Its my understanding that Ospho is an phosphoric acid used as a rust inhibitor thst convert ferric oxide to zinc oxide for pre-epoxypaint prep im also thinking if it burns off; zinc is rather toxic.

Thank you all for killing my dream

So what I m hearing is the graphite lubricant and hydraulic fluid solutions are probably what I need. That apparently the graphite helps with corrosion which is an added bonus. It also appears the simplest and less messy option.

The blue left behind is nice looking.

It also is da bom on the steel downpipes!

I did it on race car headers, all the time.

Graphite as the least messy option, I doubt it!

Aluminium is the clean easy way of making the manifolds look good. The factory did it, too.

If anything the manifolds would have light surface corrosion but nothing serious.

If you want a darker finish, try old engine oil. Check YouTube for oil quenching. If the oil has burnt off it won’t protect from rust but polymerized oil might have a change against the heat - likely not though. I‘m thinking of the finish on cast iron pans…

As i was scratching my head about what to do it occurred to me that i had a cracked header i could experiment with so, found some ATF, made a mess in the coating process and put it in the grill right there next to my steaks. The kids are going to love the new flavor.

I did it on my my motorcycle Kerker pipes after the ceramic coating flacked off the hot area – what a bitch to get it off the rest of the pipe. All done looked great I’m glad you mentioned that because I completely forgot about that.

How do you apply the ATF ? I made a real mess of it, not sure I got enough on the header

I put in a pneumatic spray bottle and gave it a good healthy squirt. or put in a shallow pan and dunk it. If you go the dunk route, I’d highly recommend not burning it off NOT in the car. the extra oil on the inside of the exhaust manifold will wreak havoc with the CO2 sensor as well as the catalytic converter (assuming this is a series 3 or an EFI Series 2. Oh, and yes it is very messy. just make sure that the manifold is all wet with transmission fluid. then shake and bake.

No on the hydraulic fluid.
Automatic Transmission fluid has rust inhibitors built into it to keep the internals from rusting - since automatic transmissions are not a pressurized system; and air is present inside.

The graphite spray lube just spray it on, and let it sit over night. It willl dry; then install on the car. If some comes off on your hand just mask off with a bit of carboard the bits you don’t want sprayed (while it’s on the car); then just touch up the places the graphite is smeared or has come off. Remember this stuff isn’t a paint, it’s a dry lubricant in a spray on medium Here’s an amazon link. I’ve had good luck with the CRC product.

START THIS PROCESS ON A RELATIVELY COOL BBQ. Don’t start at 350F with a cold manifold dripping with Transmission fluid. THIS WILL CATCH FIRE. yOU DON’T WANT THIS TO HAPPEN. bbarbecuing the manifolds at around 275 or 300F the manifolds will get hotter than that installed on the car, the last time I checked a manifold after driving all day, I think the temp was somewhere around 850F

Automatic transmission fluid flashes off (meaning catches fire) at 302-383 degrees Fahrenheit. You don’t want to catch your bbq or the car on fire. just get the oil hot enough to smoke. It will eventually stop smoking. If it still oily it’s not done, stick it back on the BBQ. You can gradually crank up the heat to see if it’s going to smoke a bit more at higher temps such as 350 or 400F Do it slowly you don’t want the ATF to catch fire. so start at 250F check then up to 275 or No more than 350F initially until most of the smoke is gone. then the temp can be increased 50F at a time to see if higher temps will make it smoke more. by 400F the it should smoke and be oily anymore.

Just be careful, automatic transmission fluid is flammable at lower temps under 400F. Don’t do this near anything flammable - away from your house and close to the neighbors you don’t like.