Hi, can anyone tell me if there were more than one vendor for the external bonnet latches on the very early E Types? Any photo I see of one of these early cars has a horizontal oval shaped latch cover, and mine is different. It is shaped like the Shell oil logo, hinged on top. I have heard it resembles a latch cover from an XK120. I bought my E in '76 and am the 4th owner. I can’t imagine someone losing the latch covers and replacing them with the wrong ones? Or I’m hoping there were two kinds. Any help or guidance would be appreciated, thanks!

All the ones I have seen were the same part as used on all MKV Saloons and Dropheads 1949-1951 for a similiar ”budget lock” on the rear wing spats (wheel covers, aka fender skirts in the US).

I think I checked from the Jaguar Spare Parts books that they even used the same part number, but that was a while ago.

But I have seen contemporary photos of new cars where the wrong escutcheon was used on the spats, the ”toilet lid” design that was used for the MKV spare wheel lid in the back of the car. But I have never seen that on an E-type.

Thanks for the info Pekka! Yes, they do look like toilet lids

I should have looked in my Jaguar XKE parts manual before asking, it does show part number WB.16049/B, qty of 2 for the escutcheons for bonnet locks, fitted to my early chassis number. Plate 38, item 46 clearly shows the oblong horizontal cover or escutcheon. I’d love to know the story of how my roadster received these odd ones. Thanks for your help,
Linda 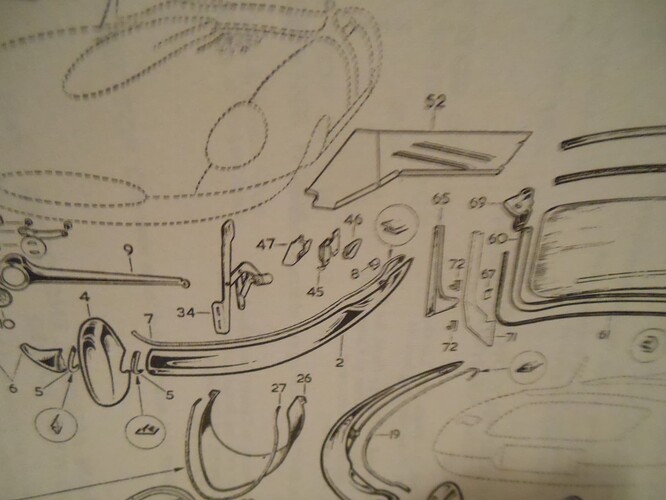 I’d love to know the story of how my roadster received these odd ones.

It’s my understanding that one reason for eliminating the OBLs was because the covers were delicate, and tended to break off with use. Perhaps this happened sometime in the life of your car, and the PO sourced whatever they could find at the time.

Thanks for your comment Tom. Yes, I can certainly see why they were eliminated. I’m sure that is what happened, as I am the 4th owner. The young man (I was young back then too!) I purchased the car from bought it as a chick magnet, but didn’t work on cars himself, and this one had complicated maintenance. His father worked in a body shop, so I’m sure that’s why the car looked so perfect when I bought it, it had just been painted. I didn’t find the underlying body damage until I took classes myself, and found the use of a magnet to detect thick body filler.
But the extensive damage was probably done by one of the previous owners. I should purchase the repros just so the car will look more original.
Thanks again, I really appreciate your input!

You are very fortunate to have such a rare car, Linda!

A recent sale of a '61 E Type (May 13, 2021) on Bring a Trailer also had the style, I believe, that are on your car. The discussion and comments also suggesting they had been changed sometime in the life of the car.

Yes, thank you for the part number which confirms that it was (WB) originally a standard part made by Wilmot Breeden and todays repro parts are cast and made by Ashwater in the UK.

That’s interesting to know! Thank you!

Yes, I do know that, and am humbled by it. Many years ago a Jag friend and I were casually talking about my Jag, and a mutual friend who kept asking if I still had it. When I mentioned the external latches, my friend said ‘that’s why Jack is interested in your car, even though he’s into Saloons.’ I didn’t realize it was one of the first 500 made.
I’m glad you snagged yours!
Funny, a guy once told me women were attracted to the E Types because it resembled a man’s you-know-what. That made me mad, because back then I had only seen my little brother’s! Regardless of what people think about them, I still think it’s the most beautiful car in the world. And I’m glad Lyons didn’t have a reason to change that 6 cylinder! It is also a work of art.

Thank you Frank, I would really like to check that out!
I appreciate everyone’s interest and comments!

Hi, I just looked at that listing - the car went for a fairly low price, wow!
Yes, those are the style escutcheons I have, amazing.
Thanks for your input!

General consensus on that car was that it was a project with some discrepancies on originality of some of the parts for the build date. Also, lack of involvement by the seller to answer questions led to that price. Too low? Too high? I don’t know! A lot of information in the comment section, but, a lot of comments to go through!

Yes, I read quite a few comments. It was just interesting for me to see those OBL escutcheons as they are what I have although not correct. I guess it depends on what price you’re willing to pay for an early E even if you have to find missing or correct pieces, like me.

the car went for a fairly low price, wow!

Was that the project for $220k? That seems high for a project!

Well, at least it wasn’t in boxes