Apparently the shop that replaced my fuel tank in my 96 XJS with the 4.0 engine forgot at least one of the spring clips that locks the fuel hose to the bottom of the fuel tank.

I remember reading somewhere that there was a AC Delco, or Ford clip that could be used…anyone remember? The OEM part number is CBC8294 and/or CBC8393.

Right now its only the supply line that has popped off, preventing me from starting the car.

Might be a bit of a delay in getting them but are these the ones? Its been a while since I was under my old ‘40 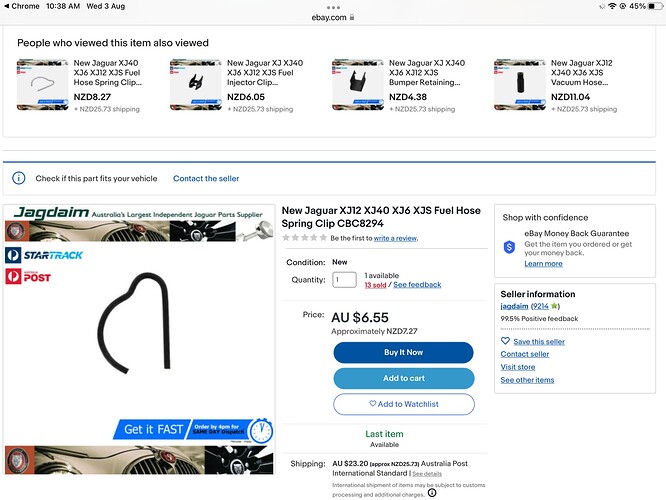 Clip was there!!! It just wasn’t turned to lock. Problem solved.

Popped out again! I could not get it to go
in all the way. Had to get it towed.

Sounds like the hose isn’t located on the spigot far enough?

Yes. I could not push it far enough in by hand. I was working under a jack, so I didn’t want to risk any attempts to hammer it in with crude tools.

I was grateful the clips were indeed there. Should take a guy with a lift minutes to resolve.

Just for future reference, due to the fact that I have worked on a couple of Fords and no GM cars lately, the clip looks vaguely familiar as a clip Ford used late 90s early 2000s.