“Supposedly” the records were “reconstituted” from a variety of sources…once they realized there was a value to having them.

I just find it hard to believe that Jaguar was able to find it ALL?

Keep in mind, data plates can be purchased, the stamp font is harder to get and more expensive, but not impossible.

With regards to the car you are looking at, is the engine and gearbox numbers the correct era and model for the car?

While I believe that are possibly some mistakes in assembling the Heritage Certificates, likely a very tiny number.

I could be wrong and posters here will definitely speak up if that is the case… I was under the impression that the engine numbers ran in groups so having an engine from a different model would be suspect.

Transmissions, over the years, from my point of view have had parts swapped. Both innards and selector covers have been swapped to facilitate a retrofit. Knowing if the selector plate actually was swapped, which would be evident by it appearing on a serial numbered tranny that would not have used that style, would cause me to question.

Unless you are in Championship Class, this shouldn’t be the issue.

I’m restoring a 1934 SS1 Tourer. It will have a correct engine when I find one, but it will not be original. The transmission will be an XK140 as it is reasonably reverse compatible. The gear selector needs that large backset to fit the car. Pity I can’t use the overdrive version.

Always looking for a Standard Flathead 16/20 HP block that is rebuildable!

Message me with details.

Does anyone have a schematic drawing of the MKII steel, factory fitted sunroof? There is nothing in the Service Manual nor in the Parts Catalogue. I’m chiefly interested in the sealing of the sunroof and want to know if there are any rubber seals as on the MkV & MKIV’s? I wonder of the the MKVII’s had the same type of sunroof?

I late to this conversation, I have a 63 with a factor sliding roof, the one seen at the MI Jaguar show referenced above. Look up on saloondata.com 178832DN

Thank you for you comment and the link to your lovely car.

May I ask what you have used as a seal on the sunroof?

I’ll try and take a few photo’s of what’s on mine tomorrow.

The roofs do leak as a mater of the water overflowing the trays. As you are aware the tray has 4 hoses to facilitate the draining of water two in the front corners draining trough the a posts and our the rockers and 2 in the rear corners that drain in the rear wheel wells. They have to be clear. The problem with these are they harden and crack or break off. You can only replace these when the headliner is out. The rear hoses are easy the fronts are MF’s; however, they can be replaced. The front and rear seals are no longer available. I found one front some years back and used it. The rear I found a seal that works. I will send you one if you give me your address.

I found a photo of a white LHD MKII with a factory fitted sunroof on the internet. Does anyone know this car? Obviously it’s a Northern American car. 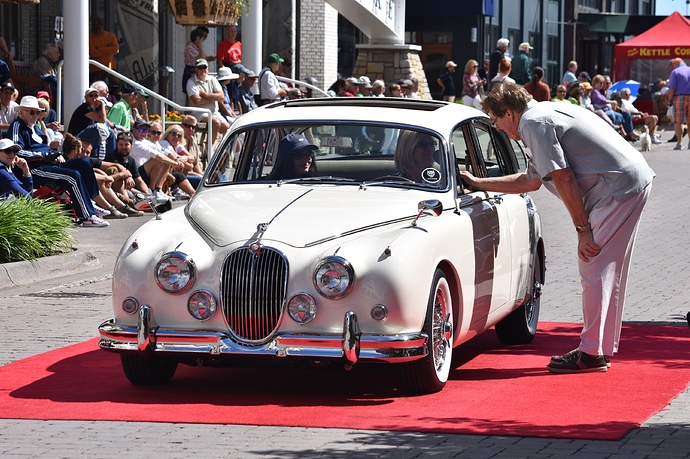 Golde was used in the BMWs of the 60s and 70s. I think that most parts are available from a company called Walloth & Nesch in Germany.
Their grey seal does not leak. I have 2 coupes, E9 in BMW terminology or 3,0 CS as the cars were called.

The car on the ‘red carpet’ is our MK2. It is a '63 3.8L North American market car. I posted an interior shot of the sunroof earlier in this thread. The information about our sunroof installation may be found there. Here’s a more recent ‘arial’ shot that shows the roof from above. The details of the Golde installation are visible here. 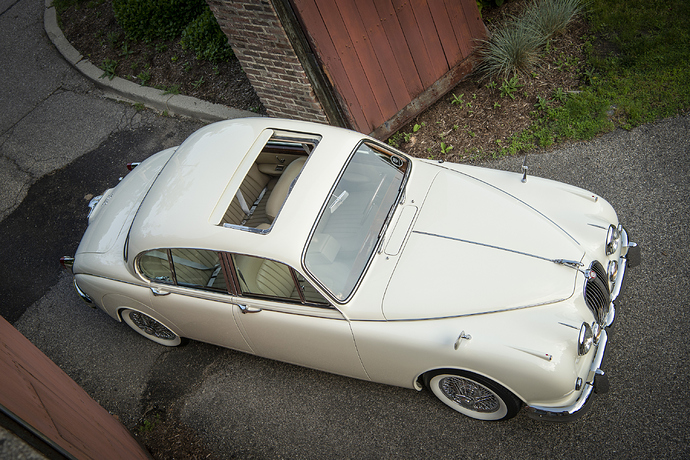 Apologies for not recognising your car and for forgetting about the earlier posting. Was the body strengthened when the Golde installation was added? When the Factory fitted one a ‘special’ body with added strengthening was needed which makes them quite rare I guess?

I went for a drive in my car this morning with the sunroof open as it was sunny and cool. Our Winters are quite mild compared to North America and most of Europe so they are ideal for these cars. I tend not to take my cars out in the hotter months. Anyway, it was quite delightful until the ignition light came on indicating that the system wasn’t charging (confirmed by the voltmeter). There is always something. Off to to the auto electrician next week to see if it’s the generator, or the voltage regulator, or something else! I’ve just had the radiator recored and replaced all the hoses and it was running beautifully. It’s telling me that it wants a full restoration I think?

The roof sub-structure does not have additional supports added. The Golde sunroof possesses a stamped U-shaped steel pocket that the panel slides into along alloy tracks. The entire unit is affixed to the inner roof side rails that run atop the doors. As this is a steel stamping and it spans the entire width of the car’s roof, it adds considerable bending and torsional stiffness to the body structure. It’s quite an ingenious design.

We love having an open roof…It makes the car much more enjoyable to drive.

My dad used to smack the black box with a screwdriver for issues like you are having. ( also used a shoe on the fuel pump once or twice also!!) I believe the points may not be working correctly. The quickest “maybe” fix is to use emery paper between the pints and check the cap on the circuits within that box.

I run an alternator and things are good so far.

Anyway, it was quite delightful until the ignition light came on indicating that the system wasn’t charging (confirmed by the voltmeter). There is always something. Off to to the auto electrician next week to see if it’s the generator, or the voltage regulator,

There is a quick test you can do to determine if it is the generator or voltage regulator. Disconnect the large and small (field) leads from the generator. Connect them together and connect this to a voltmeter running to ground. Start the engine at an idle speed and SLOWLY increase the engine speed. Watch the volt meter and if the generator is good, you should see a slowly rising voltage. Do not exceed 16 volts. If you get this result, the likely fault is with the voltage regulator or the charging system wiring. What is being done here is to have the generator self energize itself, the output being fed back into the field.

Full length fabric sunroof (probably a Webasto) or a smaller sliding metal sunroof? Both of these were likely an aftermarket addition.

From the Parts Manual: 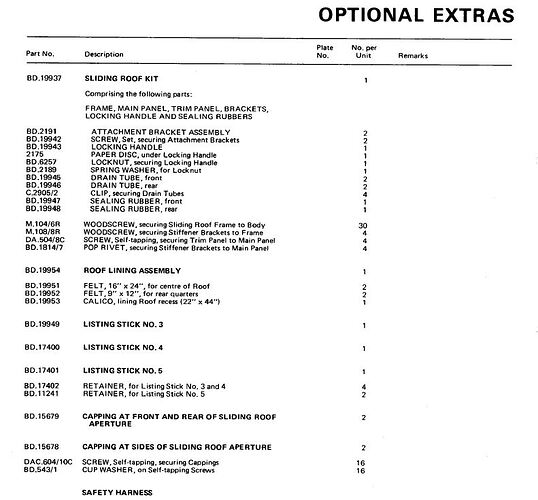 I have seen one on a Youtube video about 6 months ago. Someone posting about the video stated that at the factory, the roof line was raised slightly to accomodate the sliding sunroof. Don’t know if that’s true, but for sure a very rare option. very cool, in my opinion !

Hi Andrew,
Would you mind posting a few photos of the sunroof from the inside and outside, please?
Cheers,
Tim

Happy to do that. Car is currently in storage offsite but I will do so next time I get to it. 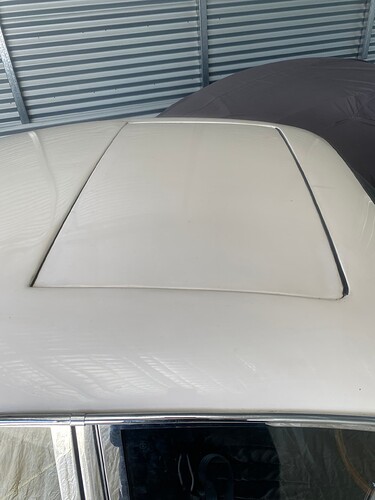 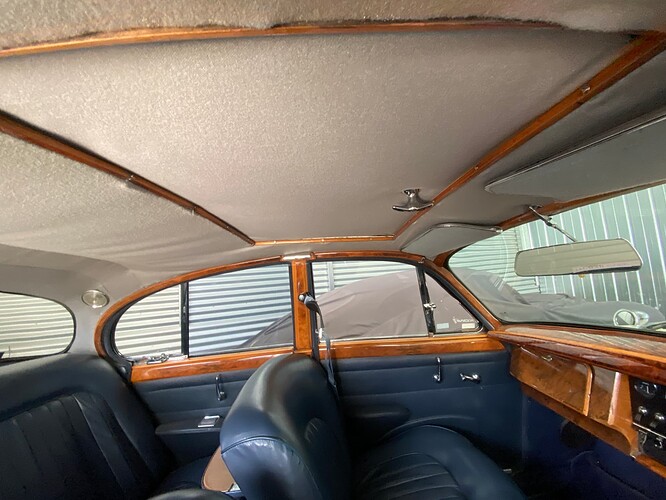 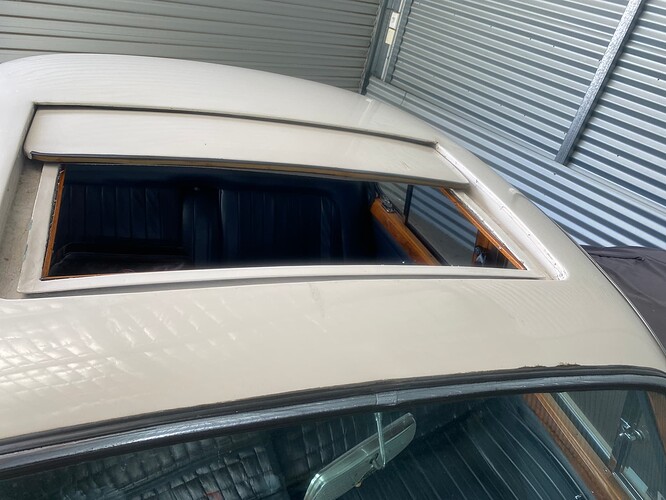 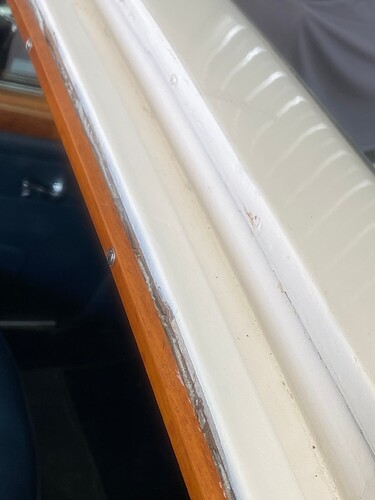 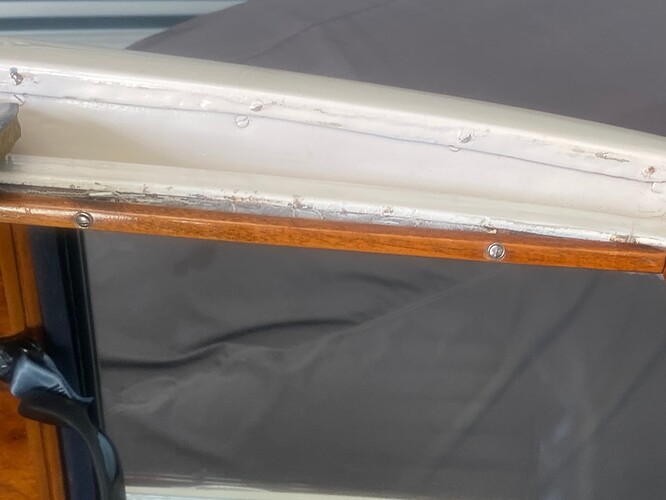