Sorry to crosspost this, but wondering if there might be some folks here with a '98-'03 XJR who might be familiar with this.

My 2000 XKR has recently started to show the “Failsafe Engine Mode” annunciation after driving for a few miles. This seems to occur after the engine has warmed up a bit (maybe 1/4-1/3 on the coolant temperature gauge).

Whenever this happens the cruise control stops working. I hadn’t noticed a performance difference until today, but today it was around 55F (so figure 12-15C) on the drive to work. It’s been below freezing all other times I’ve driven it like this. No check engine light, but whenever this Failsafe Engine Mode annunciation comes on it also says “Check Rear Lights” (I have, they all work, including when this turns on).

I’m not sure what “Failsafe Engine Mode” really means, but I am wondering in this case if it means that the electric water pump for the intercooler is not working, or perhaps that it’s turned off. Any insight?

Thread in the XK8 forum below:

Our 2000 XKR has started providing a “Failsafe Engine Mode” alert after about 7 or 8 miles of driving. I’m trying to figure out what this likely means. From a little bit of searching it looks like this might be related to the water pump for the intercoolers? The engine seems to make full power and has no issues. What’s also interesting is that at the same time it also puts up a “Check Rear Lights” alert. I checked the rear lights (including brakes) this morning before I left for work and they a…

Read the DTC(s) from the engine module.

We can all guess but the ECM has the clue.

Will there be DTCs without a CEL?

And am I going to have to buy a scan tool to read those or is there some secret code that can get that?

If you have an iPhone you need the Wi-Fi model

Sorry to chime in so late. I had this problem on two year 2000 X308 XJRs, and in both cases it was the Brake Pedal Position (BPP) Switch. The BPP switch contains two microswitches, one for the brake lights and the other for the cruise control. In a thread on another forum I saw someone say their nylon quadrant had worn, and they’d glued a piece of credit card onto it to compensate. In one of my cases that was exactly it. I only had to depress the brake pedal a tiny amount, and I could hear the microswitches click. I glued a piece of credit card onto the nylon quadrant and that sorted the problem.

In the other case the C/C microswitch was dicky. I was able to get contact cleaner into the C/C microswitch and get it working again. As a precaution I glued a piece of credit card onto the nylon quadrant and was glad I did when I realised just how little the pedal needed to be move to de-activate the C/C.

As an aside, although the BPP Switch is held on by just one bolt and a self-locking nut, it’s a bear of a job because you’re upside-down with your head in the foot well. Because the bolt is long, it’s a real pain running the nut off. I had no ratchet small enough to get in there. I was dead lucky finding a rubber bush which was a lovely tight fit on my ¼" drive socket, giving my fingers much more purchase, and the resulting tool made it a breeze to spin the nut off the bolt (and later back on again). I have photos of the disassembled switch if they’d be of use to anyone.

I’m glad I found this thread. This is where I’m stuck. Here is the story…

I went to pick up my daughter and had to drive through some construction. The car was parked and idling when ‘Failsafe Engine Mode’ appeared in the display. I did not yet know the brake lines under the back seat had been hit and damaged. We headed home and the brakes were fine for the first few stops. Then the pedal felt a bit squishy. Next stop, it was sinking and I knew I had a problem. By the time I got home, the line was dripping and leaving a puddle in the driveway.

The lines were replaced at a trusted shop and the brakes felt just like before. However, after three or four stops, the failsafe message would appear. After a stop at the store, the display would be clear until another three or four stops. There are no symptoms to describe except that I can predict which house I’ll pass when the message appears.

I have read here and elsewhere about the brake booster needing to be bled again. And, this business about the switches. Mine seem to be in place and click after a quarter inch of pedal depression.

How does a sinking brake pedal put them out of place? How promptly should they be released by the pedal? How does the piece of credit card help? I can find no piece of nylon on the little bar that actuates the switches.

Any advice on how I can chase this down? I need to sell the car because I can no longer drive but this little foible is in the way.

With my ‘99 XJR the switches activate within in millimetres of movement of the brake pedal, there are two micro switches involved, one cuts out cruise control and the second turns on the brake lights, so you should hear 2 distinct click as the operate. The switch iOS held in by (from memory) one 5mm nut and bolt, once you have the switch out you will see where there is a quadrant that activates the levers for the micro switches, this is where somebody glued a strip of credit cards to to facilitate actioning the switches earlier.

The micro switches don’t last forever. I would say they need to be replaced. (or the whole switch assembly)

I would say its random that it happens at the same time as your other failure.

I dread to think how road works damaged your brake lines! Maybe other damage happened?

I do wonder if this is a brake problem or a secondary failure. But why would my first sighting of ‘EFM’ be when my brakes went and before there were any discernable symptoms? My memory is that the pedal never went to the floor or lost all pressure.

If I make my little two mile trip to the store in the dead of night and only lightly brake and float through stop signs, the display will not appear though the pedal is still moving enough to operate the switches.

One brake switch passes current to the brake lights (they work) and the other informs a data input that the pedal has depressed. I spoke with a Jag tech on Just Ask who told me the computer wants to detect three or four mistakes from the switch before it sounds the alarm. That would explain the three stops without implicating the brake system itself. But not the floating stops.

I still haven’t made sense of what is bled from a brake booster. Most of what I know about cars I have learned in the ten years since I bought this one. Now I know why normal cars are so easy to detest. I once had a Plymouth Volare.

The credit card trick suggest the timing of the switch is significant. I figure I need to take the switches out and check the contacts on the data switch. As soon as my back recovers from the last footwell visit. 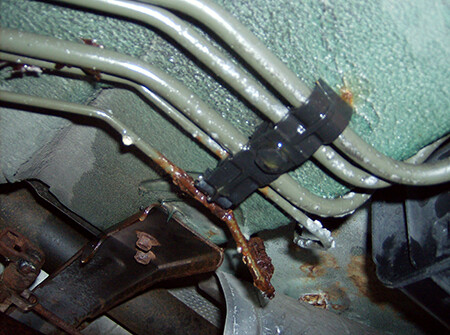 Maybe the fact you got the message just before the brakes went, sugguests its unrelated, and nothing to do with bleeding either.

I use the cruise control regularly. I don’t think I ever have the switch off. Testing will be tricky. I have only the driveway. The cruise control has on occasion not responded. I had assumed it was part of the low voltage -restricted performance problem. As you suggest, I will chase this as if it is not a brake problem. I have rebuilt dozens of micro-switches. If that is all it is, that would be great.

That’s what it was on mine.

I concur. I’ve done this on 2 of my XJ8s. I’m just waiting for my current one to do its thing, too!

I thank you all for your input. If anyone is curious how it turned out, I tell you. There was a nasty storm and my neighbor’s oak tree fell on it. Right over the CD changer. The microswitch issue seems kind micro for the nonce.

Sorry to hear that, insurance cover or a write off?

It is too soon to say. The cleanup is ongoing. Claims are underway. I’m still going to tackle that switch.