what’s the consensus on the reported ability of some tuning people to be able to ‘file’ the mixture needles to improve performance on modified engines?

My experience is that about 5% of the modified needles have been done by someone who appears to have an idea of what they’re doing.

The proper way to do it is to lay the needle on a wood block and drawfile a flat in the range where you want more fuel.

I’ve found bent needles, crimped needles, needles with hourglasses sanded into them, needles which have been rubbed on a brick… but only a few which have a clean flat obviously done to make WOT a bit less lean.

Of the poorly done needles I’ve found, most of them have been modified down about where the car idles… SUs have screws for adjusting idle mixture.

what’s the consensus on the reported ability of some tuning people to be able to ‘file’ the mixture needles to improve performance on modified engines?

If you wish to consider it, first acquire “How to power tune SU carbs” by Des Hammill

It has very detailed instructions on how to do it, and the reasoning

The bloke who made SU carbs for racing here, would take your car out on a circuit he had mapped out incorporating different types of driving, He’d sit in the passenger seat with a portable gas analyser attached to the ex pipe and make notes at various rev points.
The needles are graduated with specific diameters at { I think] 50 thou intervals,
So he’d know from his readings at what point it should have a little machined off, or different needles looked up from his chart.
It worked well but then his day job had been SU carbs since cockie was an egg.
I’d be surprised if enthusiastic amateurs would achieve an improvement.

I have just been “filing SU needles”!

I put it together with bits I had and an eye on bhp.

It makes 190 psi on each cylinder and runs terribly! Its horrible.

It would start and idle beautifully then make no power after 2,750 rpm. Flat as a fart. smooth up to 2,750 then huge protests.

I gave it timing, checked the fuel pressure, did the float heights twice, re-bushed the carb spindles twice, just about everything.

No difference. Just about to check the cam timing which would be a right drag as the covers are sealing oil perfectly.

Then I looked at the needles, UM. Standard profile.

I had a chat with an SU specialist, Andrew Turner, and he suggested a fatter profile, giving more fuel at higher rpms.

I rang Burlen. They put two pairs are in the post. I have got 2 pairs UE and UO coming to me.

In the meantime, after work today on my friends suggestion, I filed flats in the existing needles using a flat file from 1/3rd of the way up the needle. Took a couple of minutes.

I have no skill or experience what so ever, I just though what have I got to lose?

I have just come back from a test drive and-she flys!

If you have a tuned engine, its worth a go!

Great news james. I had a similar issue with a mk2 I put together (3.4 bored 3.8) 2 inch inlet system on a btype head etc etc. it literally stonewalled at 3000 rpm. I was advised to stick UO needles in as a very quick check to see if it was a mixture issue. Like you have experienced the transformation was dramatic. I eventually settled on UB.

I think you’ll find it’s hard to really get right. Richer needles are better with modern fuels, which have adulterants like ethanol or MTBE to meet official regs. But getting needles that work is tough. Yes, the car flies with richer fueling. But the plugs foul quickly if it’s too rich. I’m currently running UX, which are oddball needles that are lean in cruise and rich at high loads. There’s no doubt the car runs better, but the jury is out on whether it’s too rich.

Filing needles and doing it well is really, really hard. First you have to figure out the desired taper. To do this, you need to run the car on the road or a dyno with a good A/F sensor and a remote manometer on each carb. This will tell you where along the needle taper you need to grind. Turning the correct taper on a lathe isn’t as easy as you would expect.

You can use heavier oil, up to 90wt gear oil, to slow piston rise. A similar idea is to add large washers around the rim of the piston. Either will richen the mixture under load. As an experiment, these techniques can be used to identify the problem as lean needles. You can then select a richer needle based on your results. A good tool to aid needle selection is “WINSU”. The software is a bit weak, but it’s the closest analytical model that I know of. You can buy it here. It’s cheap enough, support the author:

For this type of work I have to think that a wide band sensor in the exhaust pipes should be the logical next step. I don’t like the idea of “filing” and think fine sandpaper makes more sense. Use the Des Hammel book recommended by someone else. No one has a better understanding of what you are trying to do than he has. If you make any changes it will be necessary to do a lot of accurate measuring both of the diameter and exact location on the needle. w/o that yer pissin’ in the wind.

Agreed. I use an Innovate LM 1. Really useful piece of kit.

My Dad ran one of his race cars on SUs, with alcohol as fuel: filing the needles worked on that, due to alcohol’s propensity to be nearly impossible to run too rich.

On gasoline, I cannot fathom how it could be accurately done.

A tuning company near me who have a rolling road advocate filing as ‘the only way’ to get the mixture set. They monitor the mixture (wide band) then measure the height of the piston when the mixture goes off. Then file etc etc.
personally I don’t like it but they swear by it. However their main focus is racing/performance cars to it probably is the way to go.

With the above-mentioned tools and techniques, I’d trust it too…

On gasoline, I cannot fathom how it could be accurately done.

Des Hammills book is the Bible, afaic, its got all the detail you need too do it, comparisons to available factory needles (which is publicly available anyway), the man built & raced these motors. No lathe or fancy techniques are needed

The maddest thing you could do is attempt the mods without shelling out about $40 for an excellent reference manual, every Jag owner should have…I mean consider the shite you get given for xmas

These days you can fit wide band sensors, in his book he focuses on old fashioned methods, stopwatches, snapping open throttles, spark plug appearance etc, so real world stuff. I am sure he probably blew up a few motors along the way

If I can find a cheap copy of it, I’ll take a read, otherwise, I’m not buying any more books about working on stuff that I no longer work on…

That is all fascinating stuff. Thanks.

Filed a bit more off, she is running like a champ now.

It will be interesting to see what the difference is between butchered UM, UE and UO needles.

Seeing as they only take minute to swap out it is no big deal to try all three options.

I will report back on my return. Might even use a stop watch for some in gear acceleration times.

Filed a bit more off, she is running like a champ now.

T’will be interesting to hear more, as you experiment and observe the changes.

At what “station” on the needle are you doing the filing?

I am filing from about 1/4 of the way up from the needle base.

This was on the basis that the car was behaving itself up to about 2,500 rpm, then felt like it wasn’t getting enough fuel. Very flat and popping a bit.

So I am not touching the bottom 2cm or so. So under light driving it is just the same.

Andrew reckons the tip of the needle doesn’t do much anyway, it just hold the needle in position when you drop the assembly into the jet.

this will get it done quickly James 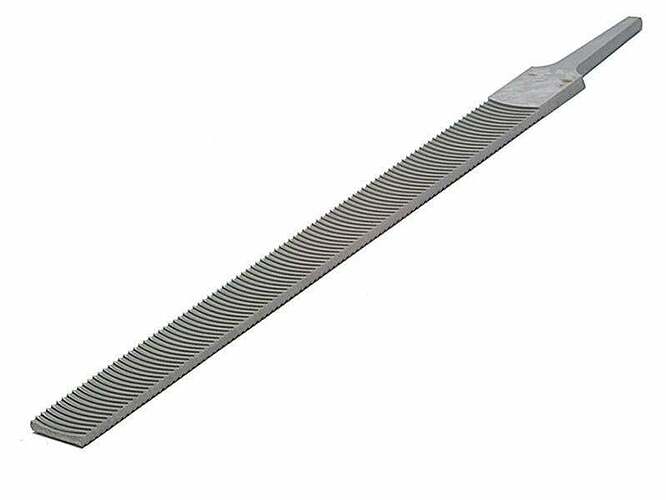 the needles are stepped

mount the needle in a drill press

measure regularly with a vernier or micrometer

I wouldn’t say they are stepped, you take measurements at certain (10,12…) points on the needle, but these measurement points have a smooth transition, no steps.
Vernier or micrometer will touch on a corner, is it better to put a bit of wire in between?