I came across this bespoke luggage manufacturer while looking for other parts.

This fitted set looks quite similar, though not identical, to the original fitted set supplied as an option with cars such as the MKIV. 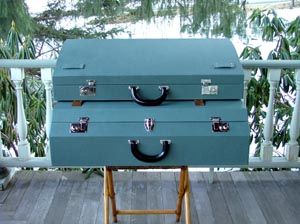 They are beautiful but terrifyingly expensive and beyond my means, though perhaps not for others.

They seem to beshaped for perhaps XKs. Something to pack a toothbrush and some bottles of Bolly, when taking ones trophy lady friend for a weekend at Portsea.
Keith Bell had a nice pair of cases that exactly fitted his MKIV.

Better off buying the toothbrush and the Bolly in Portsea and just packing your good lady into the passenger’s seat in a bikini. I was known to have done just that in my early 20’s. Just a distant memory now.

I’m sure that for the price, the fellow could make a set which matched the originals precisely. As I said, it’s beyond my means but someone might like to commission a set to fit? It’s extraordinary what’s available on the Web.

http://www.tarischarysyn.com/luggage.html
He is an occasional participant on the XK forum.

Paul , But will a Rover entice a trophy blonde for a weekend away? Especially a 75.

Perhaps only a 75 year old ‘trophy blonde’, as it should be?

Ita Buttrose would be close. Musos are suggesting we could hear Cold Chisel played more on the ABC in future.

Musos are suggesting we could hear Cold Chisel played more . . . in future.

Hey!!! What about more Skyhooks?

This is the type of fitted luggage I had in mind. Imagine trying to take them on an aeroplane! Still only just enough room for Bolly and a toothbrush. Did people just ‘overnight’ or simply take less with them in the 1940’s? 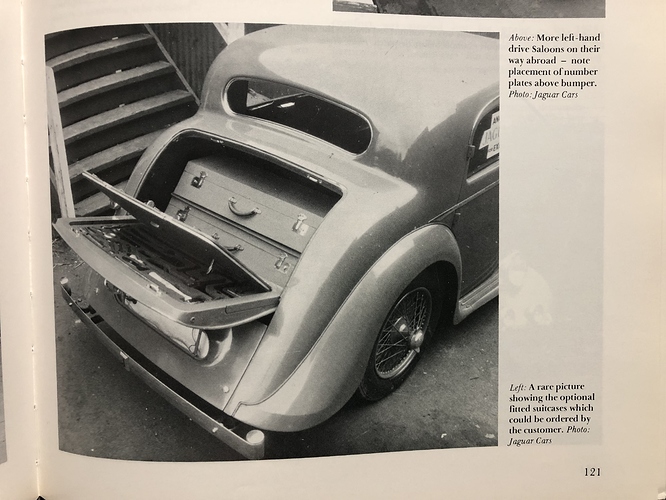 Did people just ‘overnight’ or simply take less with them in the 1940’s?

Just spitballin,’ here, but at least in the US, folks maybe didn’t car travel as much, and our American tank trunks were cavernous.

Hey!!! What about more Skyhooks?

Ah, a bit of local Aussie history for you Wiggles; Cold Chisel wrote a song about Ita Buttrose Cold Chisel - Ita (1980) - YouTube Ita is lined up to be the new head of our national broadcaster - the ABC.

The boot on the Rover would make an interesting project for Taris, given its (relative) enormity.

Twould easily exceeds the car’s worth many times over…

Here is a Mark V. 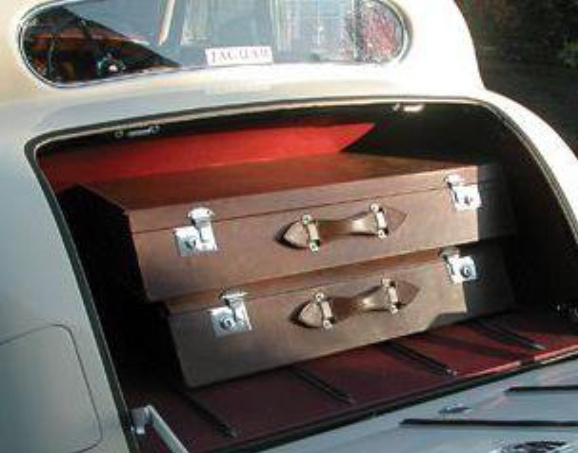 Are they the originals?

I suppose that car ownership, and the need for overnight stays were extremely minimal for years after the war due to the relative high cost in a world recovering from dreadful man-made conflicts. The type of motoring and motoring holidays that we are familiar with now did not gain prominence until the '60s, and by then, there was a young population with spare money for the first time in history. They often bought a car before their parents could.
I believe the boot design of the early Jags was to cater for the occasional times when a family with a bit of extra lettuce could have a short holiday and take everything with them. The boots were intended to be extended when the lid was lowered. Luggage could be stacked out to the edge of the lid and tied down with straps through the staples, effectively doubling the capacity. I saw a B&W film with this scenario in a scene or two. Personally, I would be nervous doing this - adequacy of tying, weather damage, theft, etc…and what about the extra weight hanging out the back? Could make for some interesting cornering. What about the extreme load on the lid hinge attachments? The lid is already super-loaded with a heap of heavy tools. Also, I would guarantee that a minion of the law would intercept you and ask some questions whilst writing out a ticket for something.

Thank you for this. You’re absolutely right about the 1940’s / 1950’s. You brought back a memory of a story my mother and her brother used to talk about over Christmas Lunches. My grandfather had a woefully underpowered Ford ‘Prefect’. When the family went on holiday it would be annually and for several weeks, so they would have their luggage sent on ahead of them on the train, then they would drive. On one particular trip they were passed, rapidly, by a famous and obviously quite wealthy professional golfer driving a new MKVII (Jag connection just in case you were wondering). As the Jag swept past my uncle shouted, “Catch him dad!”. Needless to say the ‘Prefect’ was not up to the challenge, so they just pulled over in fits of laughter and had tea and a sandwich while the Jag roared on.

I think my MKIV and MKV both have perfectly adequate boots for my wife and I to have a weekend away together, but no more.

. The boots were intended to be extended when the lid was lowered. Luggage could be stacked out to the edge of the lid and tied down with straps through the staples, effectively doubling the capacity.

Mk IVs and SS s had straps to restrain the luggage, Two on the edge of the boot lid and two on the bodywork at the top of the opening.
OK to keep pedants occupied. Has anyone ever seen original straps? What colour was the leathe? Thickness? . How many holes in the strap. How did it fix to the strap retainers Which direction did the strap do up in? { I looked at the parts book for the correct term but it was AWOL.
I await enlightenment.

Luggage retaining straps are not listed in any of the parts books in my possession.
Luggage is listed thus in my books for '36-'37 models.

I could not find a translation for N.D., perhaps Latin for something?

For Mark V the luggage acquires part numbers and is listed thus:

I believe that straps were not supplied by the factory, but may have been common enough in the accessories market that the factory felt obligated to provide the chrome attaching staples to ensure proper use of aftermarket straps.