Anybody done any flocking of their tool tray and/or cubby boxes? How much do you use?
I need to order some flocking powder, and it comes in 1 ounce and 8 ounce packages.

Hi Rob,
For the cost of flock, I would go the larger bag - better to have some left over, than a patchy job.
I personally mixed up PVA glue with green craft paint and painted my tray with that, before applying the flock.

Ok so you think one 8 ounce bag ought to be enough.

I recall this being one of the messier jobs back when I had my MK IV DHC. As in half of the flocking wound up on the floor. So yes - at least 8 oz. 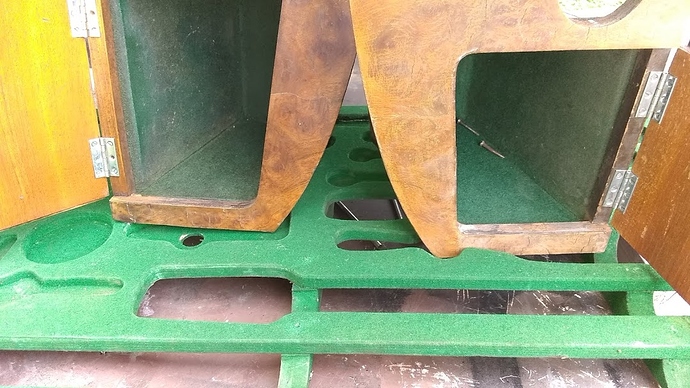 Their supplier is craftflocking.com which is blocked by my AVG virus protector as a phishing site.

You have to be a master flocker, to gain access.

I ended up with green fingers for a few days… Looked like I had molested a lettuce. (is that wrong to say?

None of the retail stores around me carry this stuff, except as fingernail decoration kits.

Model railroaders use this type of stuff for scenery on their layouts. It might be worth calling in to a model railroading shop? This supplier is pretty good. https://www.scenicexpress.com

There are large plastic storage containers that are designed to slide under a bed. I used this to hold the flock and also the parts being flocked. it tended to keep the mess contained and I was able to scoop up and re-apply and flock that didnt initially stick.

I looked at the model railroading stuff in a craft store we have here called Hobby Lobby. It is clumpy and heavier, intended to look like long bush grass or a miniature cow pasture, not quite what I wanted. I’ll report back when the stuff from Etsy comes. There are videos on how to do this in jewelry drawers and cabinets.

There are videos on how to do this in jewelry drawers and cabinets.

That’s probably a much better way of doing it. I was lucky to find a fellow in Melbourne who did them for me at a reasonable price. I need to have the tool-kit re-flocked so as to match the colour of the padded fabric lining of the tool-box lid. It’s a bit too dark at present on the MKIV. 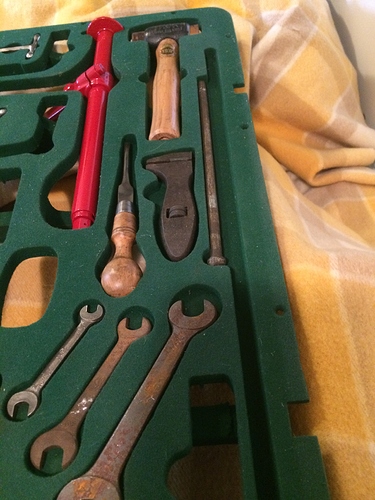 The MKV’s is a much better colour. 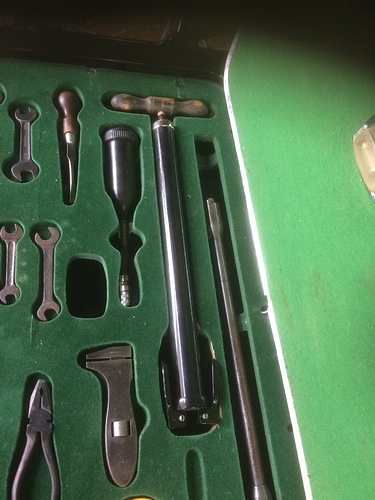 I used the model railway stuff as I found a German product that was more powdery. I also used their green undercoat intended for the base colour for the flock. The way I did the boxes was to do all the usual preparation and cut a neatly fitting cardboard cover for each. I diluted PVA glue enough to be sprayable through a cheap spray bottle, sprayed the inside of the box, dumped a fistful of powder in, put the cover over the box, sealed it all around with masking tape then gave it a good shake for a minute or so. The excess can be shaken out and salvaged. I also gave a light spray the next day with a more diluted PVA to lock the flock particles together to prevent ‘dusting’ when rubbed. It dries to be invisible. For use on the road, I also cut squares of green baize to line the base of the gloveboxes, kept loose.

The tray is another story. The problem with the PVA is it tends to dry too much before you can finish the bigger area. I found I could do it in two or three goes by sectioning the tray and being careful at the edges of the prior coating to minimise a build-up at the overlap. Applying the flock was a problem because it is difficult to apply to an even consistent coat. Thin spots occur and touch-up applications are needed. The model suppliers also have a shaker for this application but I had a problem because the holes were too small to discharge a large volume for the tray when you have to work fast. I’ll try it again with the holes drilled out.

Interestingly Tim, I prefer the darker flock with a matching dark baize cloth, if available. One other point of interest re the wheel hammers. It is probably unlikely that the right type can be found, so I looked at the equivalent available. The standard Thor No 2 of today just has stickers on a plain head, but Thor makes a ‘vintage’ model with the name and model number cast in. Definitely looks more period. I purchased directly from Thor in the UK and they were cheaper, including air postage, than the standard model available at tool suppliers.

The standard Thor No 2 of today just has stickers on a plain head, but Thor makes a ‘vintage’ model with the name and model number cast in. Definitely looks more period. I purchased directly from Thor in the UK and they were cheaper, including air postage, than the standard model available at tool suppliers.

Hello Peter, I do have an original but it’s in pretty poor order. I’ll look at the UK version. Thanks for the tip!

The standard Thor No 2

I actually use their lead hammer for the spinners.

I actually use their lead hammer for the spinners.

The standard Thor No 2 of today just has stickers on a plain head, but Thor makes a ‘vintage’ model with the name and model number cast in. Definitely looks more period. I purchased directly from Thor in the UK and they were cheaper, including air postage, than the standard model available at tool suppliers.

Peter,
THORS ‘vintage’ SIZE 2 Hammer is a reproduction of their 1960s design, thus most suitable as an authentic Hammer for your E-type, but of course totally different from their earlier 1950s design as used for XKs and of course totally different from their 1940s design as used for Mark IV - so realistically the current design as available from the various Tool Shops, and sadly the only design imported/available in Australia from THOR’s Australian Distributor is really no worse as an authentic Mark IV hammer than the 1960s design ‘classic’ reproduction.

I fully detail the exact correct THOR Hammer for 1945 to 1949 Mark IV in my recently released 40-page booklet on Mark IV TOOL KITS (only available direct from me), and shown below is a photo of a correct/original Mark IV THOR Size 2 Copper & Rawhide Hammer……………note I label it as being Part Number C.992/d - the C.992 being Jaguars own Part Number, but it is my added Variant /d numbering system, denoting this is the fourth variant of the C.992 Hammer as first used by SS-Jaguar in 1938………., with the 1960s variant as used for E-types a C.992/g (as per THORS ‘Classic’ reproduction) 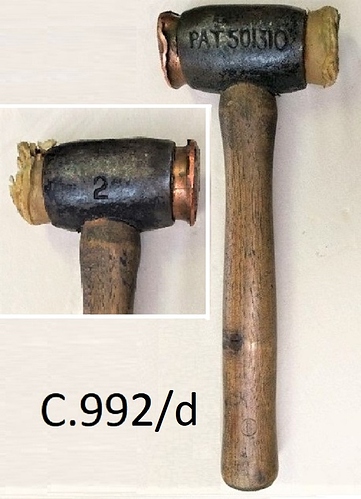 And yes, you can restore these to ‘as-new’ condition, THOR does supply spare/replacement COPPER and RAWHIDE inserts which are accurate reproductions of their 1940s originals, and indeed supply new replacement handles if you need one (a special patented head connection) that although of a slightly different shape, and of a different colour timber, can be fettled and stained to match the 1940s original. Depends how accurate you want to be… 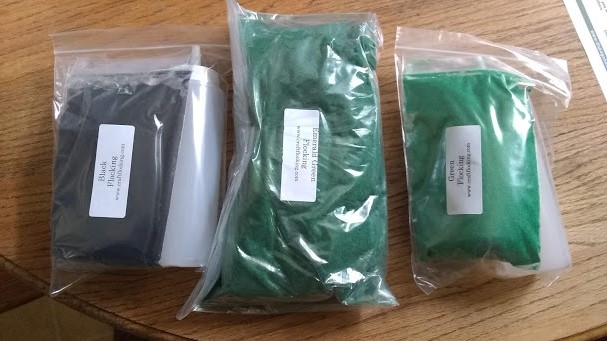 It looks like the emerald green, the bag in the center, is going to be a near-perfect match.

I think the way the factory did these trays is they put the glue on with a spray gun, and then quickly doused the whole tray at once with flocking powder over a catch basin. There is flocking over-spray underneath in a lot of places that don’t show. Then I suppose they turned the tray over, dumped off the excess, then scooped it up to use on the next one.

The glove boxes it’s hard to say, they’re cardboard, might have come from an outsider for all we know.

I got one of those repro Thor copper/hide hammers from XKs Unlimited when they had them on sale last year. Looks cool, I’m happy with it.

Hi Rob, with the flocking, I used the same flocking on the the tool tray and the glove boxes.
I painted the tool tray in a similar colour to the flocking , then sprayed glue on the tray before placing the glued tray in a large plastic bag before emptying the bag of flocking into the bag. Once sealed with clips, vigorously shaking the bag to spread the material with out getting any of the glued surfaces touching the plastic bag. This was carried out twice to get an even layer over all visible surfaces to good effect.
Once dry all spare flocking material was collected from the large bag and similar process used on the glove boxes.

@Michael_Frank: insipid you were looking for?

The glove boxes it’s hard to say, they’re cardboard, might have come from an outsider for all we know.

Mine are metal on both the MKIV and MKV. Nothing is terribly consistent with Jaguar production it would seem. What ever was to hand would be used. Post War austerity - Waste not, want not." Bit like using up 100 boxes of 100 screws! Ha Ha.