Frame Rails On or Off for Paint?

Quick question: Should the Frame Rails on a 65 OTS be painted on or off the vehicle. In other words, should the hardware be painted or plated? I’ve seen it done both ways but wondering which is authentically correct.
Thanks

There is a photo in one of the books of the Coventry assembly line. The frames with engines already mounted were trundled up and mated to the body, so it had to be painted separately. I did see a S2 car that was supposedly original paint, that had painted over frame fasteners so maybe things changed at some point or maybe it simply wasn’t that original.

In the factory, they assembled the whole body assembly, with frames and bonnet attached, and ran it through the paint processes. Once back in assembly, the front was taken off and then fitted out in parallel with fitting everything in the main body shell, and then they were re-mated later on the line. 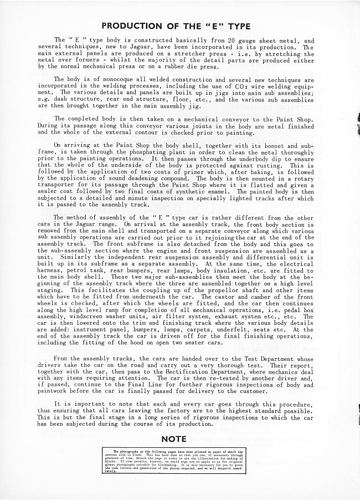 Seems to me that the two informations provided by Erica and Jeffrey just above are conflicting.
Either the frames and body were painted separately, or the whole body with frames attached was painted altogether.
Was there any modification of the painting/assembly over time in the factory as suggested by Erica, and any info about this?

There are so many angles and surfaces that the only way to get a decent paint job on all of it is to have them off the car in my opinion.

Not really conflicting. Jeffrey’s page and the photo seem correct. It just means it all came apart again after painting and was reassembled on the line with the engine in, and new black bolts. But that would also mean that if one dissembles an original car, all they’d find under the pads is rusty bare metal. I’ve never heard anyone mention that, and I’d certainly never recommend anyone do it that way.

Hi Troy, I’ve come to believe the only “quick question” on J-L is something like “what did you have for breakfast?” and even then, some of us will struggle to give a short answer

Here is my hybrid answer. I think it is generally agreed that on the S1 cars, the bolting hardware is not painted. I could give you some references if you wish. Furthermore, there was a time when the bolts used were blackened versus later cars where they were cadmium plated. Per the JCNA judging guide:
SUBFRAME BOLTS
Bees, GKN, RO, Cranes, Richards, or Ruby Owen - black oxide or cadmium on late 4.2. Cadmium (see footnote A) plated nylock nuts

I would tend to think your car is not a late 4.2, in reference to the judging standard. You can get your original (or even new) hardware plated in zinc with a black conversion coating and it will be attractive and vastly superior to the original blackending dip process used.

As @WWayman noted, it is really hard to paint them properly in-situ, so to do a top shelf job, I would paint them off the car. 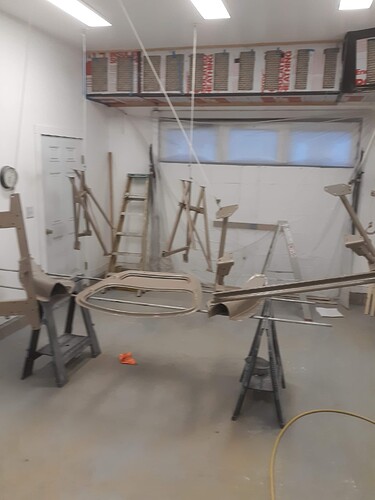 On the picture below at the assembly line, it seems that there is paint on the pad surfaces to be hidden after future reassembly. 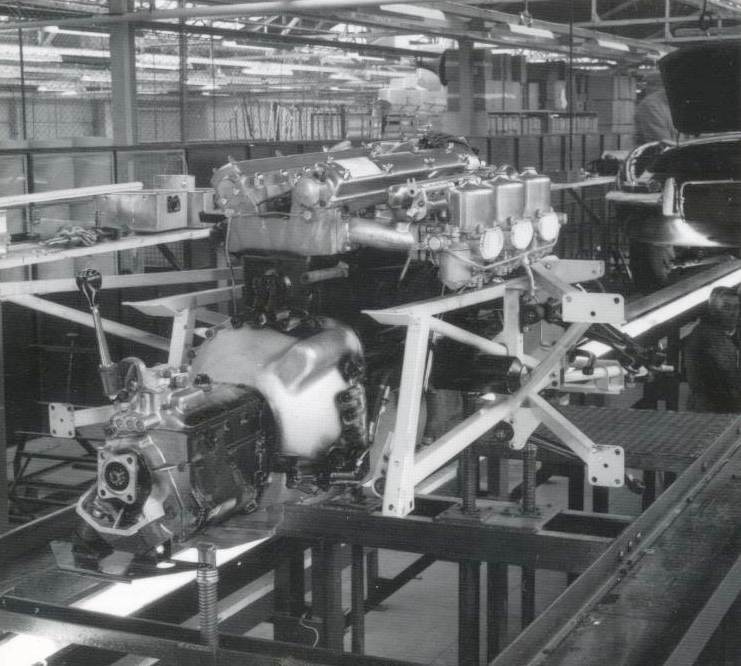 Now what about the mating surfaces on the front shield?

If the body including frames and bonnet were painted together as a whole assembly, as described in the 4th para of the Jaguar “Production of the E-Type” document, the pad surfaces on the frames should not show paint (nor the front shield on the pads areas)?

On the following picture showing the front, one can see the bolts attaching the bonnet subframe to the picture frame that are clearly not painted: 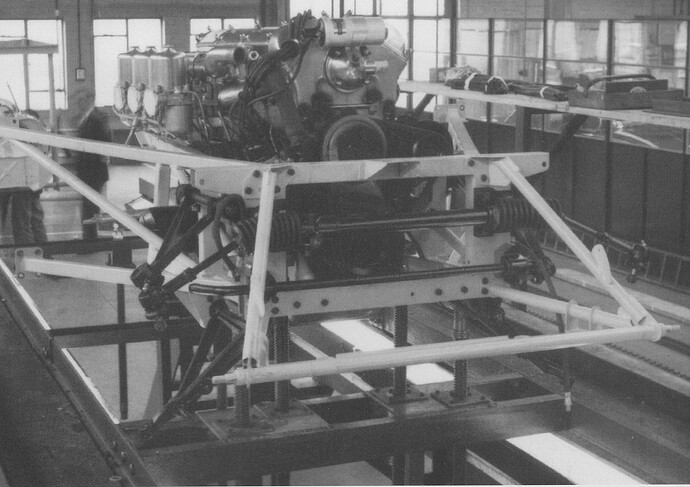 There are period photographs showing the entire body, including bonnet, on a paint tip trolley. The inference would be they received all the major painting operations assembled on this trolley. It will be impossible to confirm but they could have certainly brushed a little paint on the pads separating the frames. It’s all conjecture at this point.

They might have also had a set of “painting rails” that essentially functioned only to carry the bonnet in the paint booth so they could shoot the bonnet and body together. It would be most important for the major exterior parts to be painted together from the same batch to ensure color match. The frames are easiest painted off the car and suspended and didn’t have to be a perfect match.

As @WWayman noted, it is really hard to paint them properly in-situ, so to do a top shelf job, I would paint them off the car.

I can’t imagine painting them on the car there a real pita to paint, easy to miss something and you’ll only find it after you’ve cleaned your gun and dumped any leftover paint

Thanks to all that replied. My resto started 25 years ago and stalled (children, work etc), so I am foggy as I re-enter the resto arena. And so far, I’m quite pleased with the level of discussion on this forum.
Cheers
Troy

Hi Troy:
I’m hopefully nearing completion of my restoration project that was started in the mid 80’s and stalled due to the same circumstances.
Lots of good information here that kept me on track.
Mike

I don’t know how many decades of restoration experience is represented by this forum but it is significant. Remember, no question is too trivial.

I can’t imagine someone Coming up with a problem that hasn’t been resolved by any number of people on this site . Oh wait a minute staying married and keeping your better half happy while working on the project Lol
Solutions please

Coming up with a problem that hasn’t been resolved

How about washers I thought i read or saw somewhere that the bolts that bolt the rails to the firewall shouldn’t have washers . They have a raised spot where the washer would go to keep the head off the paint?

For the cad plated parts I am using a “copy cad” zinc plating kit/process from Caswell Plating. They have a black chromate solution that you can dunk the zinc parts in to blacken them. No matter how hard I try I have never been able to get all the plated parts to the plater for plating and end up doing some myself. I can’t say enough good things about the Caswell kit.