Do I just eyeball the insertion of new rubber bushings? Just evenly spaced, not a very critical measurement. 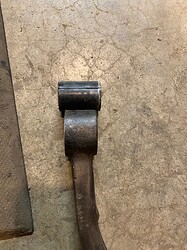 Is the lower wishbone movement supposed to be restricted to just the flex of the rubber in the bushings? Meaning, the fulcrum pin is static in the crossmember and the inner metal of the bushings. Any lube on the fulcrum pin is only for insertion and anti-seize for later extraction (for this I was just going to use Liqui Moly LM48).

I did have to use some silicone spray to facilitate installation of the bushing, but it is in there and looks like there wouldn’t be any movement. 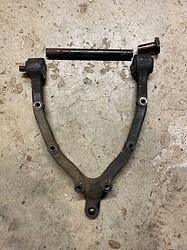 And separately, not to be confused with the lower:

Upper A-arm bushings are different and supposed to be fully lubed and are expected to have movement between all parts? ROM calls for Esso Process Oil L, but I can find a definitive answer in the archives on what that actually is. Is it assembly oil or a lifetime lubrication that allows the bushing and upper fulcrum to move freely with each other? I used Super Lube on rubber that is contacting metal and copper anti-seize on metal to metal contact points, I hope that is correct.

You seem to have it all under control.
The lower bushes are captive in lower wishbone and likewise held solid in crossmember and simply flex via the rubber. This flex has a very limited range of motion.
This is reason the lower fulcrum bolt should not be tightened until the car is back on the ground with suspension in normal running position.
The upper wishbone bushes jaguar use could probably be more accurately called bearings. They do not rely on flex.
Make sure any lube used on upper bushes is not going to eat away at the rubber.

Is the lower wishbone movement supposed to be restricted to just the flex of the rubber in the bushings? Meaning, the fulcrum pin is static in the crossmember and the inner metal of the bushings.

Yes to all.
As Baxtor said, tighten the nuts when the car sits at its full weight.

Upper A-arm bushings are different and supposed to be fully lubed and are expected to have movement between all parts?

Yes again.
I used plain grease, and again as Baxtor said be careful not to get it on the rubber, or use rubber compatible grease.

I replaced my lower control arm bushings with poly. I believe they actually turn on the pin, but I could be wrong. Still, I used a lot of poly grease on bushings, and I used a lot of lithium grease on the actual pin. I was lucky that my pins came out pretty easy (just a few light taps with a hammer), but I could see it rusting in place like what happened to you. The grease on pin was not for lubrication but more for preventing water from getting in there. I still waited to tighten nuts once full load was on bushings, even though it may or may not make a difference for poly bushings.

Thank you for validating. I know there have been issues with these rubber bushings, but I’m looking for a softer ride. I didn’t want to do anything to speed up the deterioration and have to pull the subframe again anytime soon.

You should be good for 20 years. The key for the rubber bushings is full load, then torque.
Hate to ask now, but when i read through the archives about lower control arm rubber bushings, everyone said only OEM.

when i read through the archives about lower control arm rubber bushings, everyone said only OEM.

Same applies and for the upper control arm bushings, albeit much easier to replace.
I got some aftermarket ones from SNG, the bushings themselves were OK but the rubber was not, very soft and thin, and would not stay in place.

I got aftermarket (Uro from Rock Auto) rubber all around (except the steering rack which are poly). Hopefully, the issues were anecdotal. We shall see. If they fail at least the second time doing it will be easier.

I did read about the genuine vs aftermarket, but also the suspicion that genuine could just be rebranded aftermarket.

And speaking of Rock Auto, I surprisingly had the option to select DHL as the carrier. Transit time for FedEx was 6 days and DHL was 3 days for a dollar more. And then DHL showed up a day early, same as the estimated delivery date for FedEx 2nd day air (which would have been more than double the price).

I’m sorry to bring bad news, but I tried Uro upper control arm bushings. A year later I had to replace as they became separated. At least it’s easy.

Lower bushings I think are just solid rubber, so you may have better luck. But I would not expect longevity. Most suppliers like SNG will sell real OEM. I bought OEM mounts, and they had Metalstic (or something like that) branded on them.

But I would not expect longevity. Most suppliers like SNG will sell real OEM. I bought OEM mounts, and they had Metalstic (or something like that) branded on them.

Considering the amount of work involved, plus alignment, I would not risk it.