I’ve been searching the archives regarding the front license plate mount . Has anyone considered a fabricated decal on the front hood as is often shown on English cars . Probably to outside the box for most jurisdictions but thought I’d ask. I see from the archives that they put holders on at the factory I always thought they where add ons
Cheers

I think a concours judge expects to see the factory bracket though it’s acceptable to simply display it unattached where the jurisdiction doesn’t require a front plate.

The front plate bracket was shipped with all cars, and as I understand then installed by the dealer if it was a jurisdiction that required a front plate. That’s why JCNA requires the bracket in concours, but I’ve only seen them ask to show the bracket and they haven’t cared if it was mounted or not.

California is a state that requires a front plate, but I haven’t had one on any of my cars in 40 years and have never had an issue. I used to carry a plate and a broken cheap metal bracket in my trunk figuring if I was ever stopped I’d show that to the officer and say it just broke. But never having an issue, I gave up.

I’ve seen Euro-style imitation state license plates, but those are still illegal in our jurisdiction.

Personally, I hate the look of that plate draped across the front of the bonnet. I know it was required in at least the home market, but it just really ruins the look of that gorgeous front end.

Has anyone considered a fabricated decal on the front hood as is often shown on English cars .

it’s been discussed in the past

Well that’s the kind of information I’m searching for I’ve always thought it was more Vintage period correct but what do I know . When opening the bonnet there’s not much ground clearance and less if you have Amco bars always wanting to mash something , so I’ve thought of ways to eliminate the dam plate, as for cosmetics that’s personal it’s just a different look to me

, no worse than that stupid bracket . I’d want a removable decal all good points Jeff.
Thks

Some people definitely do the stick ons. Some people skip it altogether and just cross their fingers. If you do the stickers, carry the plate with you and if you should get pulled over, explain that a special bracket is needed otherwise the bonnet can’t be opened. Probably the worst you’ll get is a fix it ticket or a warning.

Probably the worst you’ll get is a fix it ticket or a warning.

I got a full fledged ticket in Houston for not having a front plate. I think the officer decided why not, since he was already writing one for speeding and one for not having my proof if insurance with me. I hit the trifecta. 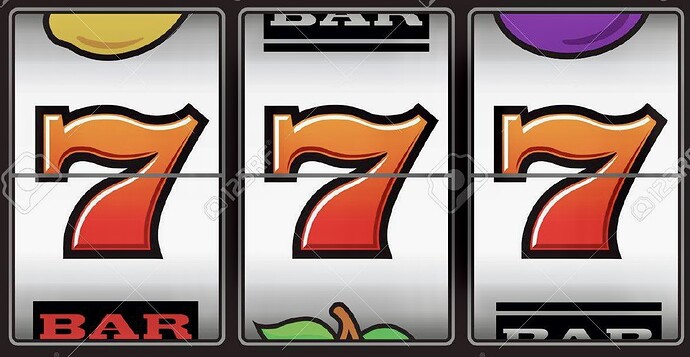 Thks didn’t see that in my search

Use one on my car when at shows

I had a sticker made and put on a magnet with the intent of using if I ever need to park on the street, but it doesn’t quite work with that same British elan. (Shown)

Turned out I needed a new plate anyway so I mounted the new plate thusly, so it was as unobtrusive as possible and I could talk my way out of any ticket. So far it hasn’t been an issue. 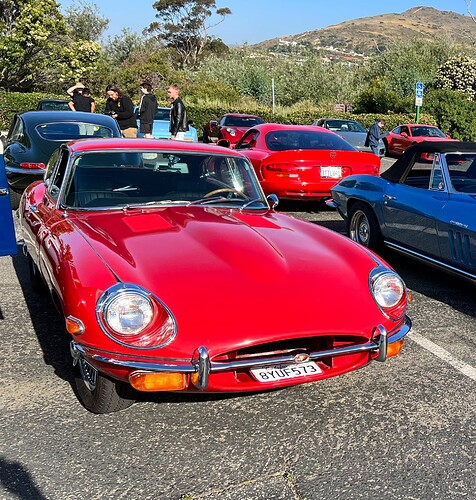 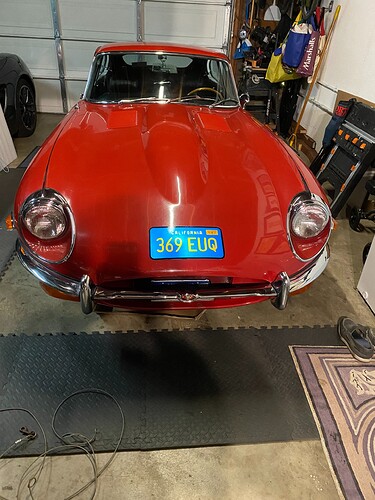 but it doesn’t quite work with that same British elan. (Shown)

I see what you mean. There really is no good solution if it’s required other than leave it off and be a wild law breaker

I was told by a former local E-type owner that he enquired of the MoT and was told it is legal in Ontario to display one’s registered license plate letter/number combination à la UK style, which is what he did. He was, however, a bit of a story teller so I can’t say with any degree of assurance that it’s true. That aside, Jim, if you follow the second link in John Walker’s post above you’ll read about an attempted solution using a magnetic facsimile, which worked ok only at fairly low speeds and warmer temperatures and was, regardless, still ugly. That was 8 years ago. Over the past 7 years here in Ontario I’ve just left it off, tucked behind the passenger seat in case I get pulled over by a policeman reasonable enough to give me a pass, though logically if he or she is sufficiently by-the-book to pull me over in the first place that might be naive. However, I have encountered many the cruiser on the road and stopped at intersections and have not (yet) been cited. Not the case for fellow E-type owner in Niagara Falls @Lord_jim who was pulled over in his ‘65 OTS and fined by an OPP officer whilst driving frontplateless on the QEW, though I seem to recall he was approaching the end of his fettling stage and also hadn’t yet installed his headlights …

California is a state that requires a front plate, but I haven’t had one on any of my cars in 40 years and have never had an issue. I used to carry a plate and a broken cheap metal bracket in my trunk figuring if I was ever stopped I’d show that to the officer and say it just broke. But never having an issue, I gave up.

Hello Jeffrey,
That was the strategy of one of my clients. He said that if he were to be pulled over, he would produce the plate and say, “it came off in the car park and I’m on my way to Bunnings to get screws to reattach it”. I replied, “but John, its still in the plastic wrapper”.

@Jagjim1
The slot, off centre in the underside of the Lower Valance Panel and the lug on the front cross bar of the Bonnet Hinge Frame, is for tilting a number plate mounted on a tilting mechanism. When the bonnet is opened the bottom of the number plate tilts up closer to the surface of the lower valance to clear the surface the car is standing on. I prefer this set up, just for the novelty of it.

I’ve seen some Numb Nuts attach the number plate to the area of the front, top surface of the bonnet, with self tappers.

And this was the before/after treatment … 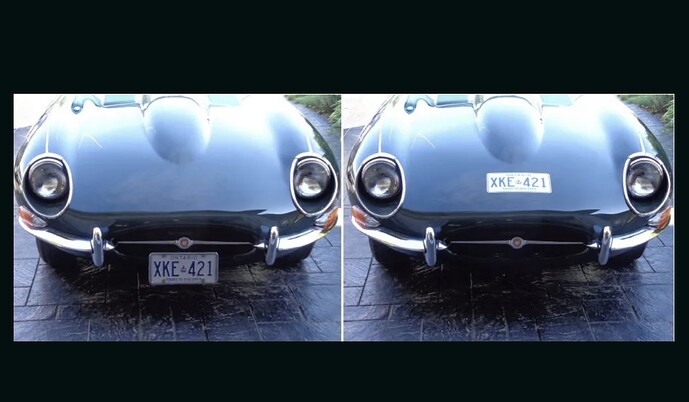 I’ve seen some Numb Nuts attach the number plate to the area of the front, top surface of the bonnet, with self tappers.

When I was “instructed” to attach a plate to my S1, and asked how I was expected to do so, the officer suggested I do that very thing to my very obvious pride and joy. Needless to say, it never happened.
A chap with an S3 stopped in at my work to have a chat, and the matter came up; he too had been told to fit a front plate. Apparently the rules state the plate must be mounted in a position where it can be read at X distance. He mounted his just like Phil’s , horizontally in the lower scoop where it could be read at the regulation distance, but hardly from anywhere else.

Having just moved to Houston area for a short time, I hope, we rented an apartment in what has become a pretty high end area much to my surprise over what it was when we left in 1990. Lots of $100k -$250k+ vehicles both in the parking garage, and especially outside several restaurants. Virtually none of them have a front plate even though required. None ever seem to have a problem with getting pulled over for it.

Is this a legal question? You need to check with your jurisdiction for what is allowed.

Is this a concourse judging question? From the JCNA Judging Guide:
FRONT LICENSE PLATE BRACKET
J30-Pg.178 & J37-Pg.211 list the bracket and tilting assembly to be fitted where required, USA required front plates in many states, and implies that all cars to these countries were so equipped. From Dr.Haddock’s and my own research we know that this was not the case and many, if not most, of the outside lock cars had no provisions for this assembly.

First summer with my E Type, over 3000 miles, no front plate, no issues with the Police yet! Plate is tucked in behind passenger seat and my excuse will be that there is a special front license plate bracket that is on backorder! Hopefully he/she will be reasonable and understanding!