Driveability upon start up and initial running is fine. When it gets warm, somewhere between 15 min to 30 min into a drive, dependent on traffic and weather, the car starts to cut out and after a short time will stall. If I let it sit for 2min, it is fine again for another 10 min or so. Then it cuts out again. On a cool morning it will drive perfectly. It appears to be an ‘all or nothing’ problem. Drives perfectly until it doesn’t. A brief pause temporarily cures the problem. It has never stranded me.

We attached a fuel pressure gauge and I drove it until it started acting up, then checked the gauge. It was running at 40psi or so, then the fuel pressure would cut to 0, back up to 40, then cut back to 0. So I know the fuel cuts out.

We checked the soldering on the circuit board, looked fine. Re-did what we thought was some suspect wiring to the pump, no change. Cleaned out the aux fuel tank, filter. Changed the fuel filter and fuel pump. Disconnected the filter and pumped out some fuel. It was clean. I do not think the issue is contaminated fuel or a fuel blockage.

It appears that something is getting hot, and cutting off power to the fuel pump.

I should add that my cooling system appears to be in good order. I’m driving this car in cool temperatures (0-10deg C), and don’t believe the engine is getting inordinately hot. The A/C does work.

Also I have another 86 SC, and it behaves perfectly in the same conditions despite the AC being inoperative on that one. I don’t think the issue is fuel vaporization.

Hook a voltmeter up to the fuel pump electrical connections with long leads, and monitor the voltage while driving. If it cuts out, you need to trace backwards on the wiring. I’d suspect the fuel pump relay is going bad, since you don’t say that you’ve changed it, or checked its connections.

When the engine starts to die, does the tach immediately go to zero, or does it fall as the engine decreases RPM?

It starts out with a slight stutter, then cuts out entirely on and off, then eventually dies - in less than 30 sec.

Fuel pump relay would make sense. This is located by the engine computer?

Yes. There are two relays there, with two different part numbers, NOT interchangeable. One is main power for the ECU, the other is the fuel pump. The fuel pump relay is the one WITHOUT the red stripe on top.

I will try swapping that out, thanks.

Theres a good troubleshooting guide starting on page 254 of Kirby Palms book. If you dont already have it, download it. It’s free.

This could also be a symptom of a clogged fuel sock filter inside the surge tank.

Yeah, that was next on my list, although I wouldn’t think fuel pressure would go to zero. The fuel pump voltage test is easy, quick, and needs to be ruled out before moving on to other potential causes.

This from Kirby Palm’s book, sounds an awful lot like my problem. But we did clean out the surge tank, and it doesn’t explain the difference temperature has on the problem. When cold and in light traffic, like this morning at 5 deg C, it will drive fine. When I return home at 15deg C and stuck in traffic it will act up in less than 15 min of driving.

FUEL PICKUP: Leonard Berk’s XJ-S would run fine when first started, but after a half hour it would start to lose

power, eventually coming to a stop. After shutting it off and letting it sit for a minute, it would start and run fine for

another half hour. It turned out the problem was dirt in the small surge tank in the trunk. As the engine ran, the dirt

would gradually collect on the screen on the pickup and plug it. When the engine was shut off, the dirt would fall back

to the bottom of the tank. This is not a freak occurrence; in fact, it is one of the most common failure modes on the

Jaguar XJ-S! This same problem happened to this author’s ’83 and several others have reported it as well.

When I observed the fuel pressure, it did not slowly decrease. It went from 40psi and then cut in and out to 0 and back. Not consistent with a slow accumulation of material that would lead to a blockage? Checking voltage to the fuel pump when it is acting up would make sense, just thinking of best how to go about doing that…

When was the fuel pump last replaced?

I just did that a few days ago…

make sure it’s not shorting out…the fuel pump wires sit right there at the bottom of trunk. I put lots of insulation on my Hot lead.

Does sound like the pump is cutting out.
As a test you could also just bypass the fuel pump relay, remove it from the socket and connect the 30 and 87 pins, the fuel pump will run constantly. 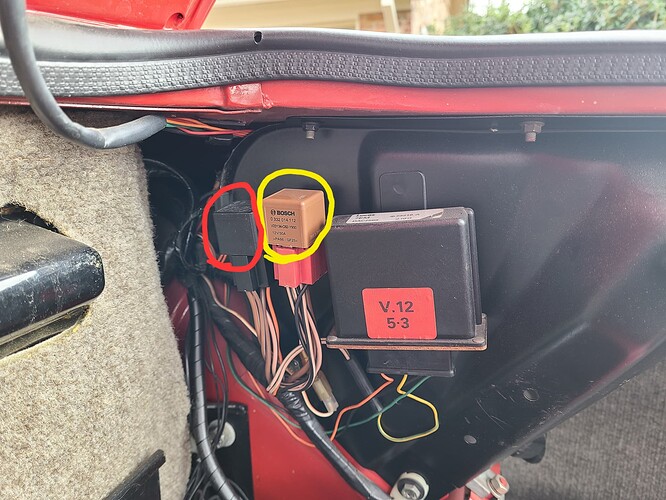 As previously mentioned these are different relays and they are not interchangeable.

Also attached is a picture of a Main Relay with a “red stripe” which I suppose was put on the relay to help those working on the car from mixing them up. 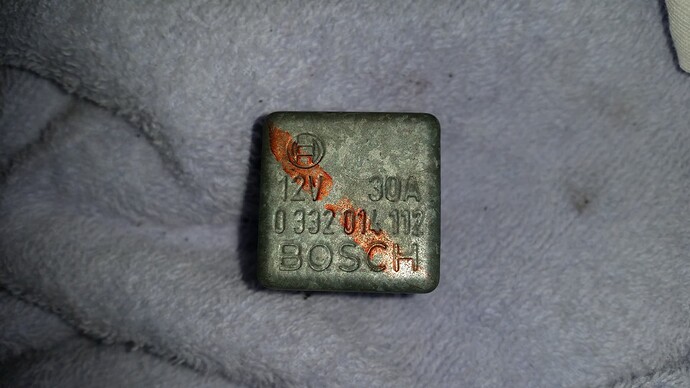 BTW, did you hear any cavitation noises from the fuel pump before it cut out?

Thanks guys. We are going to re-clean the surge tank and make 100% sure we don’t have a clogged filler. Then swap out the Fuel pump relay, and see where we are.

Also I have driven the car with the fuel cap released with no affect. Also checked the fuel enrichment switch near the circular throttle mechanism and it was working.

I hope to get to the bottom of this soon! Thanks for your help.

Another possibility is a collapsed fuel hose leading from the surge tank to the fuel pump. I experienced some fuel pump cavitation noise and the engine stumbled especially on hot days when low on fuel.
I noticed a bend in the hose and I installed an EZ-COIL as suggested by Greg. 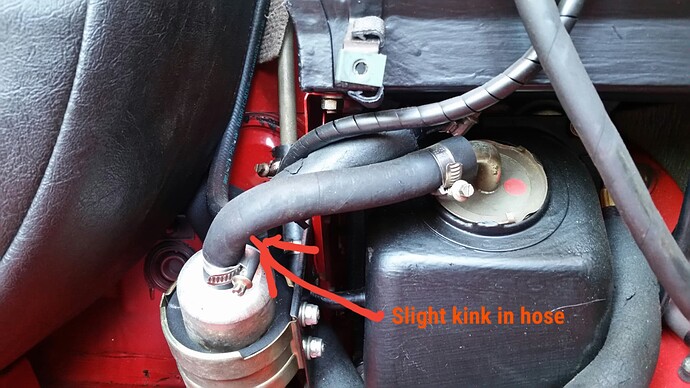 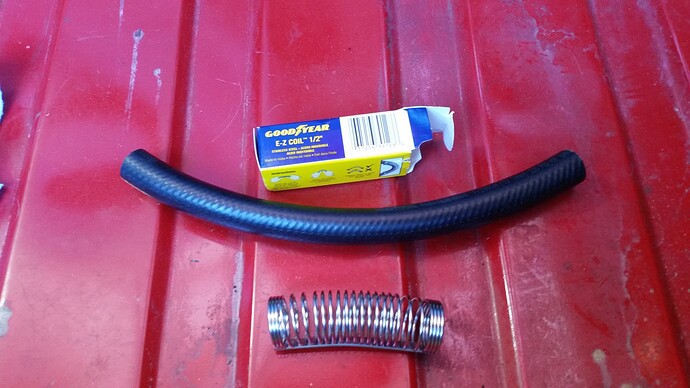 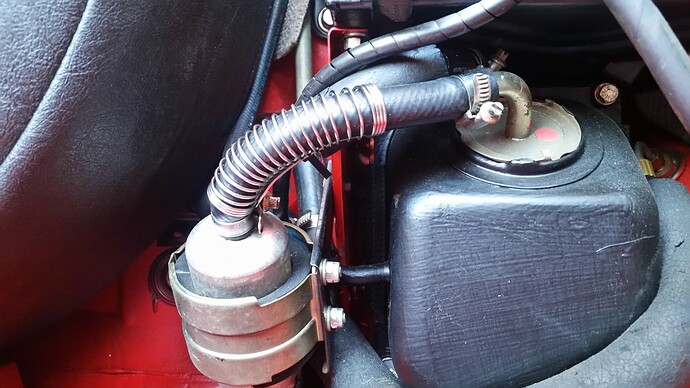 The original hose was a molded one that held its shape. but the new hose I installed was just regular fuel injection hose. It is a very tight space beneath the battery and the fuel hose needs to make sharp turns. This is how I solved some fuel delivery issues.

I also found an online Ebay vendor that sells molded 1/2" fuel hose, which I ended up using. The EZ Coil helps, but I was still having some connection and bending issues, especially with my non-OEM fuel pump. 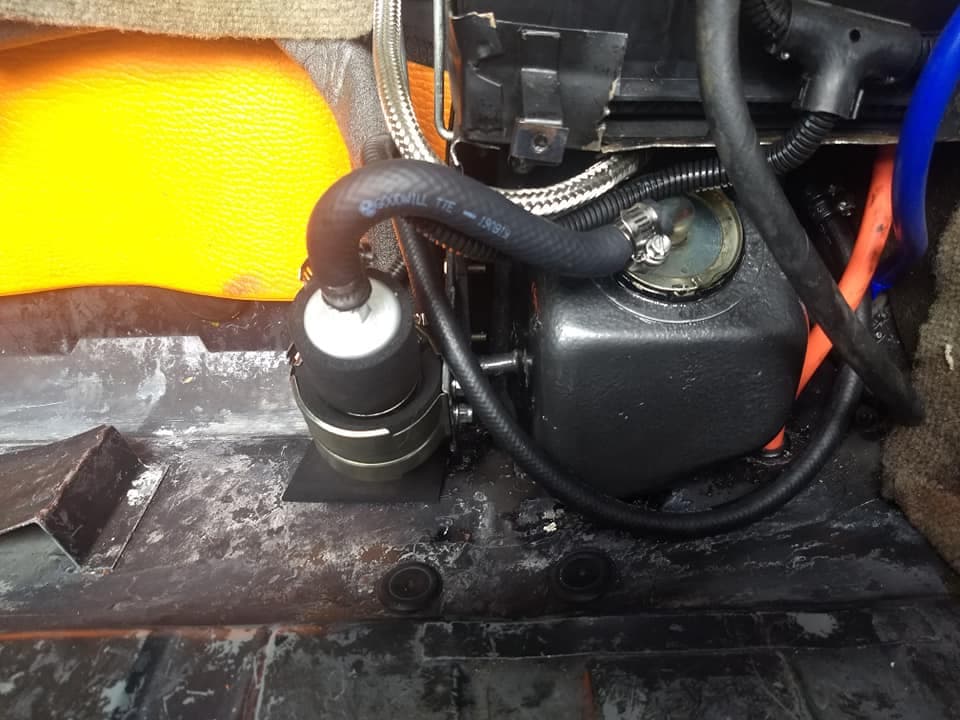