It was going so well, today, too…
One of the threads on the captive plate for the filler cap hinge seems to have stripped. I’m presuming 10/32UNF: the outboard one has threaded up fine, but on the inboard side the screw is just pushing into the hole. It was fine at panel fit up before painting, but not so now.
Is there any simple way to get into that captive plate to change it? There is zero chance of helicoiling it in position. Obviously the car is now painted. I was wondering about cutting an access hole from the hood bay (DHC) and seeing if I can make a repair that way - but just sticking a large self-tap screw into the damaged thread is awfully tempting.

I would clean and oil the threads of the screw. Then mix up some JB Weld and push it into the stripped hole. Then insert the screw. When cured you should have pretty strong threads for that application.

Agree with the JB Weld but I would clean the hole with acetone on a Q-Tip, apply the epoxy, wait 24 hours, and then drill and tap the hole. Be careful not to overtighten the screw when reinstalling.

Thanks for the suggestions, but even seeing this hole is extremely difficult. No chance at all of getting a drill or tap anywhere near it. Have a look in your filler cap flap - it’s the hinge plate mountings, tucked up under the forward part of the filler ‘box’.

Huge result today!
Having slept on it, I managed to get far enough into the boot to take a look at the problem. It isn’t a captive plate, it’s two small 10/32UNF captive nuts in cages. The inboard cage had been bent backwards at a slight angle. This cage is very close to the rear upper bulkhead in a DHC, which forms the ‘parcel shelf’ that the folded hood sits down on.
Wedging a large screwdriver up between the rear face of the bulkhead and the nut cage realigned the captive nut sufficiently to allow the set screw to engage with the thread again, and it’s now tightened up fine.
Worth recording for reference for other restorers, I think.

Just missed your question a few days ago, as I could have told you. See also attached photo of the Petrol Filler box with the two cages at the left of the box just visible. But good you’ve solved it meanwhile. 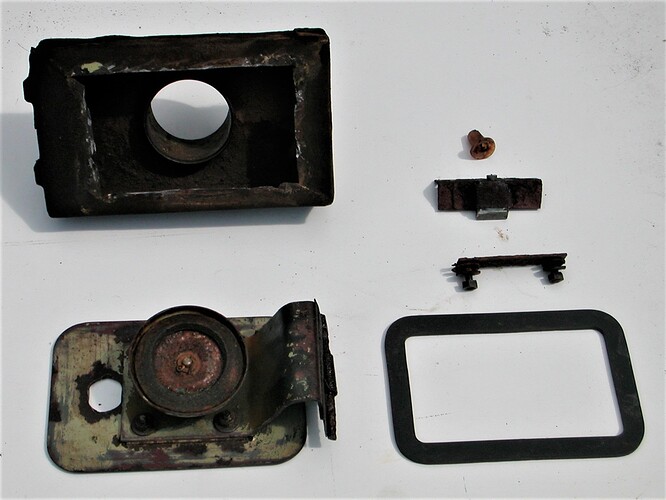 Thanks Bob.
I’ve spent most of today on this - my lock was not reusable, so I have a new one from SNGB to fit - unfortunately it doesn’t bear much resemblance to the original, so there’s a lot of modification to do! At least it uses a proper nut to mount to the lid rather than that poor spring clip. I got a new spring clip, but it’s nowhere near the right shape to fit the original lock casting.
I also have a new striker, but the spring in that is so strong I fear I’ll damage something by trying to push it shut over the spring. Better to press down and turn the key back. The seal’s not obtainable at the moment so I’ll have to improvise.