Added gas the other day and fuel garage now moves from E to 1/4 and stops. Should be almost full. Is this typically a faulty fuel sender? 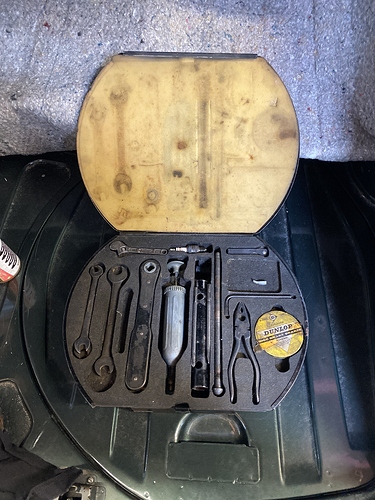 Just found this in the boot. Somehow never noticed before I had a tool kit!

Think you’re missing a spanner as well but not sure.

My car’s a Daimler V8-250 but it has Jaguar spanners so obviously not original. Most pictures I have found show 2 spanners in each recess but I only had one. I bought a genuine Daimler spanner but the recess isn’t deep enough for 2 spanners so I don’t know what’s going on. And because I have the cam timing tool I know it’s not a Daimler version.

Anyway, back to the fuel gauge - The sender is very easy to get to - on the passenger side (I guess you’re in New Zealand?) of the boot floor about 300mm or so from the back of the car, close to the edge of the floor is a round cover. Slide this cover and it will come away and underneath is the fuel float device which from memory I think is held by 3 screws. Thoroughly clean the area before you remove it.
Once this is out you can see if it has developed a leak and doesn’t float properly any more, or is sticking or if the electrics have given up. You can watch the fuel gauge through the back window as you move the float up and down it’s travel and see how the gauge reacts.
New ones are available from the usual suppliers I think and I’m fairly certain I’ve seen some on ebay.

Yes, one spanner is missing from the large recess. Also a pencil type tyre pressure gauge. Here is my kit. I believe the large ratchet was only fitted to some kits depending on the type of jack provided. Mine does not have one. 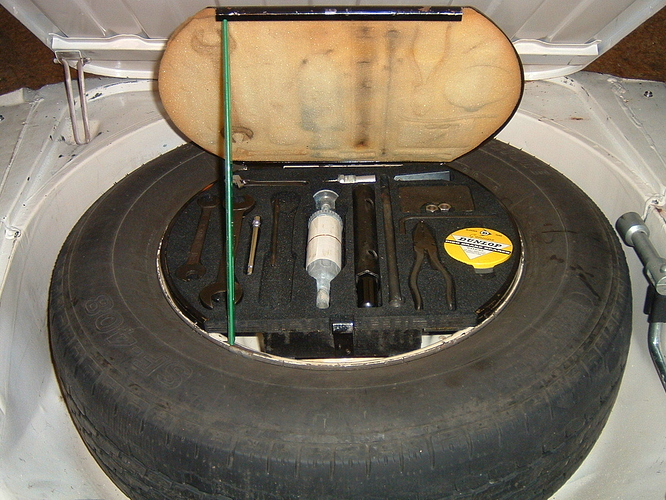 Thanks for the advice. Float has petrol in it. Works if I tilt it manually. Happily there’s on for sale on Trade Me here in NZ.

Could you retrofit a neophrene float like the type I use in my SU’s?

I bought floats for my XJ6 from SNGB. First time since '87 both senders have worked. Post is slow now though. Paul.

Got a new one via Trade Me. Might buy those floats though. Had heeps of problems with the e type with leaking floats.