Installed new hoses… removed 2" filler hose and silicone sealed around o ring
just to test. .isolated vapor recovery
system. …smell is there every morning…disappears if driving car around. …new gas cap with pressure
vent…sump system removed. …tank is
lined. …Still strong smell. …maybe I
should sell the car as I’m tired of this.
Hasn’t even got 50,000 miles and always garaged
problem. …the hoses under the carhaven’t been changed. …but the smell is strong in the trunk…pump and main filter seem ok…I don’t get it

My 83 XJS does exactly the same thing. Very annoying. I have replaced everything I could but it is still there. I cannot figure where the line go that come off the upper right rear of the fuel tank. It seems that 2 of them come from the wall separating the trunk from the interior but a 3rd goes up to something I just can’t quite see. It is above the rear end of the ECU.

When I first got the car and drove it, I never smelled the fuel. I replaced the fuel pump and filter and I started smelling it so I thought, lets go all the way. I replaced al the fuel lines, the sender unit and even took out the lower smaller fuel reservoir. I cleaned it out I went through the fuel cap and hoses, tightened all the fittings and figured I had it. I close the trunk lid and after a bit, the fuel smell is back. It has to be venting out somewhere but where…I don’t know. Maybe you and I are the only ones with this problem.

No, guys, for sure you are not the only ones - my 1983 XJ-SC 3.6 l is doing the same thing. I am in the middle of preparing it to make it road legal in Germany (it is a UK one originally), but after this I will need to follow up on such kind of ‘details’. Please post any progress you might achive.

When I finally get it figured out…it could be something so simple that I will laugh at it…will keep posting on this …I don’t wish this problem on anyone.

Dave, you say that the smell (in the trunk) “Disappears if driving car around.” If the leak is actually in some part of the plumbing in the trunk, don’t you think it (the smell) would still be there when you get back home? I think I would look below the trunk at the supply and return lines.

I have a similar issue with my 33k-mile '89 coupe. It did have a minute tank leak at a baffle weld, but that’s been fixed. Now it occasionally has a gas smell in the passenger cabin (not the engine or boot) after sitting, possibly only when it has a nearly-full tank on hot days.

My car HAS had the fuel vent recall repair.

I’ve been told there is a tank vent tube that goes up into the wing space between the passenger-side rear window and the rear window and has a hose that makes a loop up there and connects to another tube, perhaps something to do with being able to park on steep hills or side-to-side slopes without siphoning fuel out through the vent, I think. (BTW, I have no idea what is done if the car is a convertible). Possibly the rubber hose loop deteriorates over the many years, and if the tank is full and the car is left in the sun, expanding fuel can be forced up there and push fumes or dribble fuel into the passenger cabin. My mechanic is loathe to address it, possibly because it is very difficult to get to, and probably requires removing upholstery, which messes up window seals, etc, etc.

Surely there is someone in this group who has dealt with this issue, or pulled the interior and fuel vent lines out of a breaker, or can say fumes in the cabin are due to something other than what I describe…

Are You using A/C ? Is working properly ? If no, there is problem. V12 is very hot and fuel from the fuel rail go back to tank also hot. I did A/C restoration to R134a (in Europe is not possible to buy and use R12) - new tubes, cooler, fuel cooler, A/C compressor. After this I drive always with A/C ON, and fuel go via fuel cooler to tank.cold. No smell, because fuel in the tank does not want to expand and go away through fuel cap (It is not quite tight). Maybe help.

I’ve had that same problem and it turned out the gas tank itself had
a leak. New tank … no smell at all.

By the way, what happened with these auto signatures where you could
put in you MMY so everyone knew what you were talking about. I
haven’t look again but maybe it can be done when you open an account?

You’re lucky, there are no new fuel tanks now, I looked for one. Mine leaked at a baffle weld; I was able to get it brazed.

By the way, what happened with these auto signatures where you could
put in you MMY so everyone knew what you were talking about. I
haven’t look again but maybe it can be done when you open an account?

The new software doesn’t do signatures in posts. There is a “my cars” field in your userprofile.

Have a look in #user-guides-and-how-tos:

Here is how you get to your profile:

How do I: Access my user profile? User Guides and How-Tos

The various fields are explained here:

Here is an explanation of the various fields in your user preferences, from top to bottom. Username: * This is the name by which the system identifies you internally. * You can use this name to logon to the website. * If another user mentions your username as @username on a post, then the system can notify you of this. * You can change your username, but please don’t without contacting an admin or a moderator first. * Your username is visible to anyone able to view the…

Dave, this post is really true, I have exactly same problem … trunk smells of gas first thing, and then if you take it out for a spin it clears up

I did a little experiment and blocked the rubber outlet vents under spare wheel. After I had driven it round a while it still smelled, which tells me the bad air is either prevented from beibpng expelled through the two holes, or more to the point, a slight vacuum caused by the movement of air between the road and the underside of the boot, lacks the necessary drag to pull it out … either way the bad air is gone, only to reappear when car is parked

disconnecting the battery solves it as well

I had slight fuel smell, turned out to be weeping at the pump terminals. Not enough to even leave a damp area as it mostly just accumulated in the terminal connector rubber boots (they are upside down like little cups remember) but it did smell after sitting for a while and disappeared after a bit of use, probably due to increased air flow.
New pump solved the issue

I thought I would make two more suggestions today, but Rudy (Ian) has already tried the first- sealing up the trunk! Here’s my final idea. Out in my garage I have a handy little gadget called a “Halogen Leak Detector.” I use it for tracking down A/C leaks. It has an irritating beeping sound. I thought I would see if it would respond to gasoline, and, sure enough, when I put it close to the open gas cap on my car it went crazy. Scrimbo, you need to beg, borrow, or steal an electronic leak detector for A/C. Maybe that will change your luck!

I had a similar situation. Finally fixed it by doing two things.

… previous owner had obviously over tightened the nut that screwed into the brass housing, and the damage had occurred… this allowed the vapor to slowly creep along the ridge, up the threads and ( clinging to fuel line ) up the insides of the foam protection into the trunk … the small gap between the inside of the foam and the fuel line actually smelled of raw gasoline … it was very concentrated under the battery tray and that worried me somewhat

What was it saturated with? If it was saturated with fuel, you accomplished a
whole lot of nuthin’, it’s SUPPOSED to absorb fuel. Your problem would be
that the purge system isn’t working. It’ll soon get saturated again.

If it was saturated with something else, perhaps you accomplished
something. 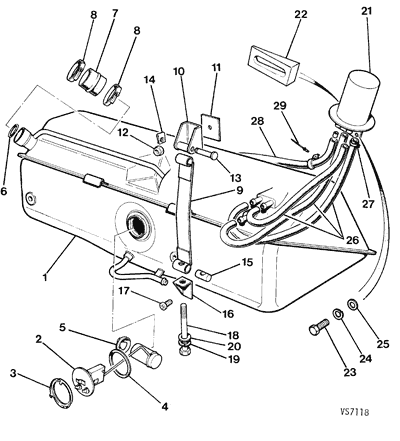 Wayne,
I think you are referring to the area where #21 is in the diagram. It is called a fuel vapor separator for whatever that is worth.
Perhaps a place to explore. I really don’t see an easy way to get up in there though.
Jeff

I’ve been told there is a tank vent tube that goes up into the wing space between the passenger-side rear window and the rear window and has a hose that makes a loop up there and connects to another tube, perhaps something to do with being able to park on steep hills or side-to-side slopes without siphoning fuel out through the vent, I think.

I have never had an xjs that didn’t smell like fuel in the boot. 9 times out of 10 it’s a slight leak in a fitting, but more and more with the aging cars it’s likely the fuel tank itself is leaking. And then you have the wool carpet around which someone probably didn’t remove when changing fuel filter and got it embedded in.
I have had to repair two tanks through the years one on 89 and a 90 and it’s costly but had to be done. If it’s just that very bearable lingering smell, well that’s just how an xjs smells.

Tested it for venting through floor also. …the clear hose you sent me. Separated at first bend by top of fuel pump. .put rubber line back on…will now see if silicone that I put around o ring is doing any good. …I have been trying to do everything one piece at a time in order to isolate the culprit. …Will look at lines underneath
when I can get it up…I ran into a guy yesterday talking about cars and he just moved here from California awhile back and he said he has sniffer. …hope he digs it out for me. …more later. .