Getting rid of coolant crud in the motor

At the risk of being shot down I’m looking into an easier way of decruding the engine block rather than pulling the motor apart (82 HE V 12).

To date I have rodded the radiator (new AC condenser) then fitted Tefba filters to both sides… replaced all hoses and done a reverse hose flush on the motor with the thermostats out. I use 82C (180F) thermostats so the car heats up to 80-82C in the winter and usually 83-85C in the warmer parts of the year.
I found that at 110Klm/h (68Mph) on a day of 32C (90F) it could fluctuate between 85-92C (180-198F). This is all without the aircon. I’m fitting a new clutch to the AC compressor so when this is going the temp will rise further. Thus my concern.

I feel that the only other thing I can do to mitigate any further rise in temp is to get rid of the potential crud in the back of the block.

I’ve read a lot about using various acids (acetic, muriatic, citric etc) and the risks that some pose and I am a little shy of trying them. I also read an article about using dish washer detergent as it is non-foaming and that sounded like it might be worth a go.

Can anybody comment on the use of this type of detergent and the effect it had on their flush.

Trev,
Last year about this time I removed the failing 4.2L XK engine in my 1984 XJ6 Vanden Plas and replaced it with a nicely running 4.2L XK engine from my 1987 XJ6 parts car. When I had the replacement engine in my engine test stand I knocked out the core plugs to clean out the water jacket of 32 years of accumulated debris. The attached pictures show what I found behind the core plugs and how it looked after I cleaned things up… 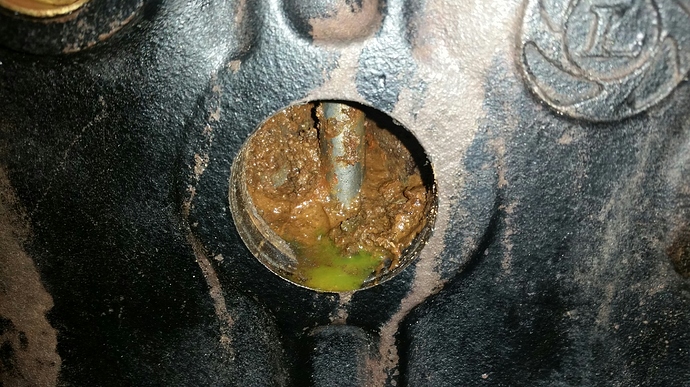 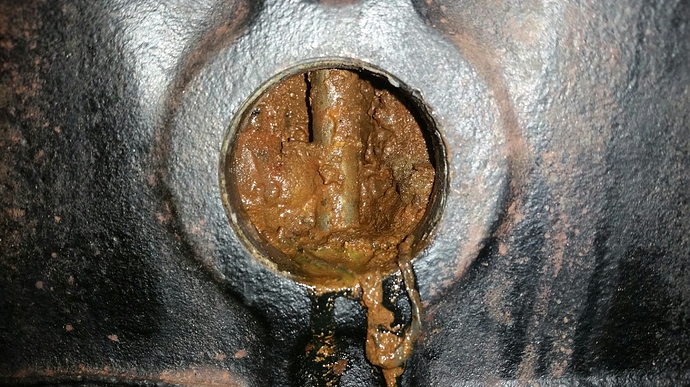 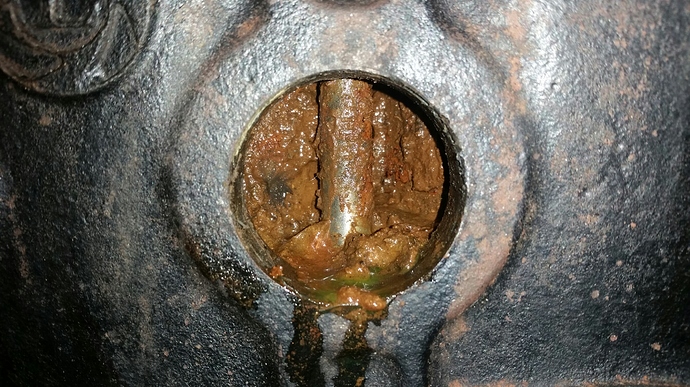 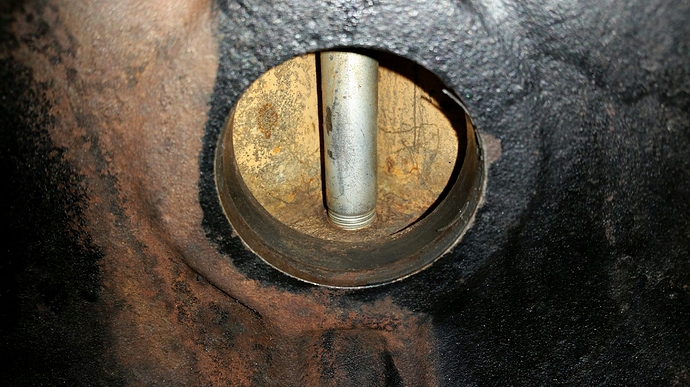 I scraped the debris out with a variety of tools, compressed air and high pressure water from a garden hose. I don’t see how just putting a liquid in the engine would clean out this kind of accumulated gunk.

I did a complete flush with vinegar. replaced all of the coolant with vinegar, drove the car for about a week, maybe longer. Drained the yuk out. There were yuk blobs / chunks too.

Flushed with water until the smell was completely gone. Replenished the coolant. I was I was surprised how rusty (colored) the vinegar was; and amazed on how well it worked. The car doesn’t over heat in traffic any more either. Win Win!

Thanks for that Paul. How was the cooling later? Trying to avoid the Welsh plugs at this stage but I’ll probably need to eventually.
I noted that a dishwasher cannot be dependant only upon the spray jets to clean… there is simply not enough of them to get in to all the nooks and crannies particularly if I’m batching and stack it to the hilt. Yet there is seldom a food particle left. I therefore feel that the cleaning is all down to the detergent and hot water. So if there is no negative reason to give it a try, why not. Engine crud couldn’t compare to my solidified three day old breakfast cereal that disappears during one cycle. I only hope it doesn’t dissolve gaskets and such but all the engine and gearbox parts I have put into the dishwasher (only while batching) over the years have come out shining.
Trev

Wow… that sounds Very promising. Thanks for that Mark.
Trev

I only hope it doesn’t dissolve gaskets and such but all the engine and gearbox parts I have put into the dishwasher (only while batching) over the years have come out shining.

Trev
You like living on the edge!!! Or…possibly a verrry clever way to get a parts washer for your birthday…
When I pulled my V12 to bits I was surprised at the amount of crud around the rear cylinders…and it was bloody tough to dislodge…we’re talking a sharp object and persuasion stick wielded by a wife who has just discovered a dishwasher full of car parts!!!
I think you’d have to resort to chemical warfare to do this with an intact engine…but knowing what you have to dissolve is the issue…I don’t know what the tough crud build up actually was…Possibly the vinegar approach suggested by Mark…if he did it on a V12?

On the instructions for the dishwasher tablets it says don’t use with aluminium. So I put half an aluminium tray in the dishwasher and kept half out for a control. After 60 min cycle I took it out and compared the two halves… 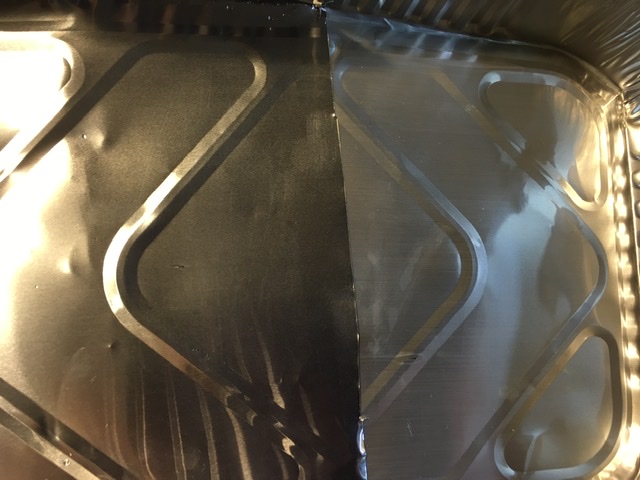 The half from the dishwasher has lost its lustre but no real damage. I also put a cast aluminium saucepan in the dishwasher and being mat already, it didn’t change.
From these observations I might give it ago.
I might put a dishwasher tablet in each of the Tefba filters and run the motor and see what we get in return.
Added to this, dishwasher cleaning solution is said to dissolve lime build up so that might take care of the calcium.
Could follow up with that.
If all that fails I think I’ll take Marks lead and go for the vinegar.
Trev

I’m very interested in where this investigation ends up. I have +100K miles on my V12 and I’m sure it would benefit from some decrudding. My concern, as with things like using flushing oil, is where does the crud go? It’s all well and good to loosen it up, but you then need to get it out of the system.

The lumpy bits should end up in the Tefba filters. Anything that gets through those should stay in suspension and flush out… I guess

Happy to wait for someone else to do the guessing

I’ve heard suggested (on other forums for other cars) that one should run higher thermostats to help keep the crud down? Not sure if coolant at 180F vs coolant at 200F makes that much difference?

I use 180F thermostats, and your engine temps are similar to mine. The highest are when I’m idling on hot days (85F), it will creep up to 198F (no A/C) When driving, mine drops quickly and stays at 180F.

I don’t have A/C either, but will add it one day. Idling/stop and go traffic with A/C on will bring on the highest temps, IMO. I would think as long as it stays below 210F, all is good? The key would be not to shut off engine at 210F, better to shut off A/C and let it idle back down under 200F.
The other helpful thing would be to increase fan cooling at idle, if you notice your temps going over 200F.

Gee, I would think higher temp thermostats would make the crud worse. After all, it’s particulates left after the water boils that are the worst component.

I’d love to be able to get pure water. Not the distilled stuff from the store, but chemically pure water. It dissolves most anything. We had a plant producing the stuff at a power plant I worked at, and all the pipes had to be stainless steel. Seems like if you could fill that coolant system with that stuff just once, it’d dissolve away a lot of the crud before it ceased being pure enough to dissolve anything.

Trev,
I have no way of comparing the cooling before and after the cleaning in this donor engine from a 1987 XJ6. This engine came from a crash damaged parts car that I couldn’t safely drive. For the most part I ran the engine in the donor vehicle inside my barn before I removed, partially disassembled, cleaned, adjusted, reassembled and installed it in my1984 XJ6 VdP. After installing the engine I also installed a recored radiator. The 1984 XJ6 VdP ran nicely at 90C or slightly above on hot days even while driving up long hill with the A/C running. But I have no idea how much the cleaned out water jacket played in cooling the engine.

My suspicion is that cleaning out that debris helped eliminate hot spots inside the engine because coolant was actually reaching and cooling the spots in the water jacket that were clogged up with debris. But I have no data to back that up.

BTW, I have removed the core plugs from several 4.2L XK engines and they all had piled up debris around the head studs similar to the pictures that I posted. Some of tge head stud were bably corroded as well. Based on that experience I decided to remove the core plugs in this engine since it was out of the car on my engine test stand and easy to work on. I am glad that I took the time to do that because the before and after pictures speak for themselves as too how much debris can accumulate in the water jacket over time. It was also a good way to make sure the head studs looked good, and they did.

Good luck with your project.

It’s not a panacea, but after soaking with a vinegar solution, I’ve gotten good results using a pneumatic power flusher.

The important thing with that is to remove thermostats, and disconnect from the radiator, to get full flow through the engine, and to not flush goonk into the rad.

I wonder if it is possible to estimate the amount of crud you have by filling the system to a known level, then draining it through the bottom hose. Measure the amount of coolant coming out, and we can all then make relative comparisons as to the displacement of the crud in the system that is left behind. However we would need a pristine block to set the high bar for this exercise. And what about the heater element?

What about the Heater Matrix

What about the Heater Matrix

It depends if you choose the red or the blue pill.

I’d love to be able to get pure water. Not the distilled stuff from the store, but chemically pure water.

Isn’t that de-ionised, rather than distilled, water? I can get that from my local store. 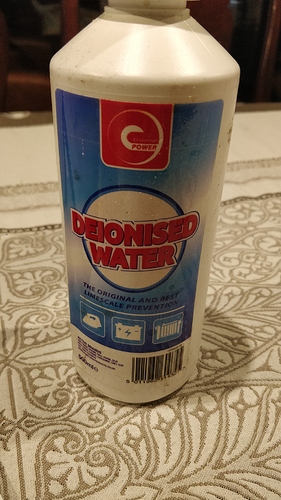 I always take the red pill.

To test for suitability, my wife and I tried to manoeuvre a dishwasher tablet (one with the red ball) into the Tefba but it’s a bit of a squeeze. Maybe half in each.
As for removing the thermostats, we discussed this and concluded, although it would improve the flow rate (better flush) it would be more scientific to test one thing at a time. If the detergent does poorly on its own then the thermostats come out and we repeat.
I had planned to try and measure the success of this (or not) by measuring the crud that came out rather the displacement. Displacement measurement is too tricky considering the physical constraints and the possibility of air pockets.
Trev