True it seems counter intuitive…but under guard braking the tyres if under inflated will make dual parallel line and lock up more readily…. Because there is less adhesion under heavy braking as the braking forces force a distortion of the tyres….when what appears to be over inflation has its distortion minimised therefore giving more adhesion ( more rubber on the Road) better braking. This is not an engineering view but my understanding of how it all works…. The downside is that the ride is a bit harsher….I’d rather the harsher ride.

But most folks I know, when they are going on track, add pressure! Seems counterintuitive to me.

With a car that is generally a streeter… that is somewhat true.

On track cars, ofttimes TP is quite a bit less: doesn’t “feel” good, but lap times beg to differ!

Even my GT Datsun, albeit highly modded from street, I’d use 22 psi front, 20-22 psi, rear, depending on the track.

This was on Goodyear Blue Streak slicks, which were essentially 185/13s.

Danny,. May have lost something in the translation (from english to english) but I’ll try to answer your question. Car bits are named different things by different people. I did remove the big rubber jounce stops from the rear suspension and replace that with modern urethane jounce bumpers that are cocentric with the damper rod. I did it because the urethane increases damping at the end of travel. Does that help answer your question?

Given the compounds used on modern treaded tires a small change in width is not going to be measurable in terms of ultimate grip. Racing slicks and treaded street tires are apples and oranges.

Time to get some data. I will buy a pair of original S1 dampers and test them to get their force-velocity characteristics, then I will take them apart to see their internal bits. With that I will feel able to contribute to a discussion on dampers and their characteristics.

I have an enquiry to SNG Barratt asking for confirmation that the Girling dampers they sell, C20011G and C25951G, are original or exact replicas thereof - can anyone confirm or correct that? I want exact originals, no updates, upgrades or equivalents.

No trouble, it’s been on my mind for a while, it’s an area of the original car I want to understand better. 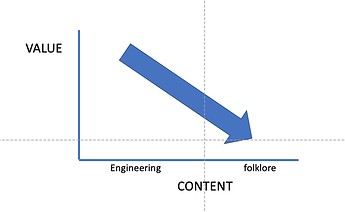 Hi Marek, thanks for pointing that out, I suppose you’re referring to the dotted line? That wasn’t intended to denote negative, it’s a guide line left from a hasty sketch in powerpoint. I’d correct it if I hadn’t deleted the original! I hope others will indulge me and take the general point

I think was Marek is saying, tongue in cheek, is that folklore can have adverse (negative) value.

David, what Series of E-type is your car? The one you did that investigation with?

I think on the Etype, at least those models designed for 185mm width tires (did the Series 3 come stock with 185s or something wider?), that wider tires should be considered an aesthetic decision, not a performance improvement. In addition to my original premise that most of us never even come close to the cornering limits of the car, there are also some minor adverse affects on the front suspension geometry when a wider tire is just thrown into the mix. Probably not noticable except for things like steering effort at low speeds. But the front suspension is designed with the center of the contact patch centered on the tire width. This line of action can be displaced to a slightly less optimum position, depending on the tire/wheel package.

Time to get some data. I will buy a pair of original S1 dampers and test them to get their force-velocity characteristics,

Clive, go straight to Tony Lee at SNG here in the US with your question. I have purchased their new product but that car is a long way from being on the road. I have some dampers that look original that you can have if you want.

I think was Marek is saying … is that folklore can have adverse (negative) value.

Now I get it, my dumb.
Agreed

In addition to my original premise that most of us never even come close to the cornering limits of the car, there are also some minor adverse affects on the front suspension geometry when a wider tire is just thrown into the mix.

I can cite two examples where narrower and/or taller tires greatly improved the overall driving feel and behavior of the car: My TR6 and my XJR.

This might mean sacrificing a bit on a skid pad or extreme driving. Or maybe not. I’ll never know.

The car is a S1 OTS. I later found out that motoring journalist Derek Jenkinson (Jenks) used those same tyre pressures on his S1 FHC whilst hammering around Europe to write his reports.

I’ll second David’s and Paul’s remarks, the best way us to use original tire sizes and recommend tire pressures.

And of course all wheel angles need yo be set up according to the factory ROM.

IMHO it’s a fantastic feeling to feel the car almost steer itself in corners and how gently it can be controlled with the right foot. YMMV.

that wider tires should be considered an aesthetic decision, not a performance improvement.

More or less a correct statement.

Paul, that sounds like something my wife would say. I pick more

there are also some minor adverse affects on the front suspension geometry when a wider tire is just thrown into the mix.

I believe an E-type has particularly high wheel centre lateral offset (lateral distance between wheel centre and kingpin axis) which will make it sensitive to tyre width.