My 120 fhc is missing the key to the cuddy box. The lock has the number “16” printed on it, nothing else. It was suggested to me by a key supplier that I try an FNR16 key. Codes for these keys run from FNR1-FNR25 so it could be. FNR Key Cut to code. Please note as this key gets rarer we are using HD (brass), Ilco and Errebi key blanks. Sharp new cut to code key for your early jaguar. Key head may vary from that illustrated. Codes run from FNR1 - FNR25 For: Early Jaguar. Some...

Does this correlate with any number match that anyone is aware of? Does anyone have an original FNR key that works their box?

I’ve tried to get the cylinder out by the described method of pushing in at the pin points with no success, and a locksmith also failed at that.
Thanks for any suggestions.

Mine says “FA 531” from a 1954 DHC. It has a rectangular head, rather than a round one. According to Viart, the series that preceded the FA series was FNR with numbers from FNR1-FNR25.

What is your chassis number?
Early FHCs had a Tudor brand lock and key for the cubby box, not a Wilmot Breeden Union brand. 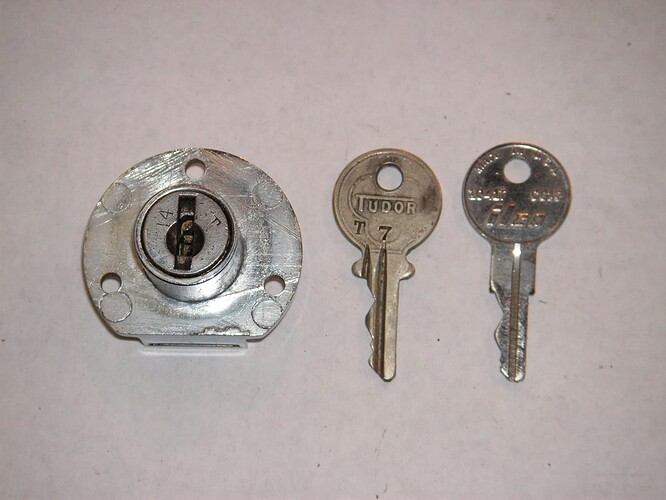 I called myself looking at Viart, must have missed that. Very helpful. I’ll order the keys.
Thanks to all.

Ron,
Normally your boot (trunk) lock should have the same key number FNR 16. So both the boot and the glove box have the square Union key.
Towards the end of XK 120 production a (gradual) change-over from FNR to FA keys took place. I don’t think there is a precise date used by Jaguar for the introduction of the FA keys. As an example: my April 1954 OTS has a mix of FNR and FA keys.
Original FNR keys can sometimes still be found on eBay UK.

The SQUARE Union Keys date from the 1960s…
For an XK, you have a ROUND Union Key for Ignition, and a RECTANGULAR Union key for the Boot… 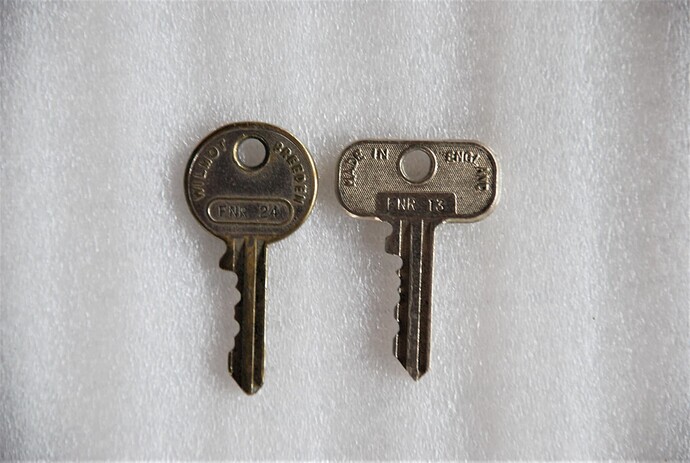 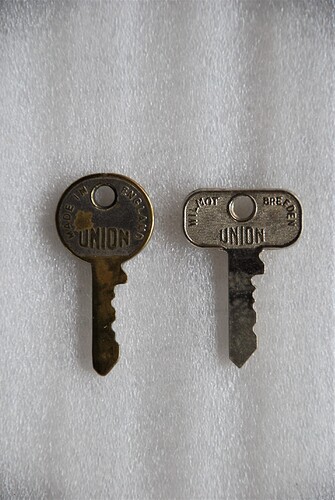 See hand drawing I did of all the different key profiles - this was tidied up for inclusion within XK140 EXPLORED…
WB-KeyProfiles.pdf (41.5 KB)

Best source I know of for original Union Keys, and indeed locks is Peter Gross, can’t find a link quickly, but others on this list will help…

What is your chassis number?
Early FHCs had a Tudor brand lock a

Where did you get that from??? I am not aware of TUDOR brand ever being used for XK keys - 100% Wilmot Breeden for my money…

Best source I know of for original Union Keys, and indeed locks is Peter Gross

Do you mean Peter Groh in Ellicott City, MD ??

You’re right of course: my poor knowledge of the English language. With “square” I meant “not round”.

Yes, that’s him. Thanks.

Early FHCs had a Tudor brand lock and key for the cubby box, not a Wilmot Breeden Union brand.

Slightly OT, but the Tudor key shows T7 and the lock barrel 14T?

IIRC my MKV DHC glove box lid lock is Tudor 14, but I have never found an original Tudor key, but have two sets of locks and (non-original) keys made for them.

I would be very surprised if Peter Groh can supply original Wilmot Breeden FNR keys. I spoke to him 15 years ago, and he said he had no stocks of FNR keys, But he occasionally found one at a swap meet. He said he keeps a waiting list for FNR keys and put me on it. Never heard back.

The rectangular boot/glove box key for my July, 1953 DHC carries FA511 and is a Wilmot Breeden. The ignition key is so worn no numbers are visible anymore, however, what can be discerned very faintly is “Graham’s” and “oront”, clearly a replacement cut in Toronto.

All very helpful. My ignition key is an FA, so one of the cars with a mix of key types.

I’m going to order the recut FNR key so that I will have something, and I can keep an eye out for original keys. This should work my boot lock as well.

the Tudor key shows T7 and the lock barrel 14T?

The T7 key is for my Mark V RH cubby box. I found an ILCO key, as I recall at Home Depot, which I had cut to match.
The T14 lock is from another Mark V.

Here’s a bit of trivia on original Wilmot Breeden keys I learned from my searches. Most keys will be nickel-plated brass like the photo Roger Payne posted above.

However, for a couple years in the early 1950s nickel was scarce in England. We saw this with the temporary body-painted rear taillight housings on the XK120s. During that same period, Wilmot Breeden produced their keys without their customary nickel plating. So it’s possible to find a NOS “brass” Wilmot Breeden key without the decorative nickel top coat.

I would be very surprised if Peter Groh can supply original Wilmot Breeden FNR keys. I spoke to him 15 years ago, and he said he had no stocks of FNR keys, But he occasionally found one at a swap meet. He said he keeps a waiting list for FNR keys and put me on it. Never heard back.

Have to say it is about 15 years ago that I purchased a brand new ROUND Head FNR24 and a RECTANGULAR Head FNR13 from Peter, as spares for my somewhat worn originals for my XK140 (as per my earlier photos), more out of frustration, as although I have built up quite a collection of MRN, FNR, FA, FP, FS keys of ROUND, RECTANGULAR and SQUARE heads over the years, I simply could not find locally these exact two, and back then when I asked Peter he had an amazingly large range of original NEW and worn used Keys and indeed some Locks on offer. But then again, we certainly don’t see many original Wilmot-Breeden/Union keys here at local swap meets anymore, but they are still around if you hunt for them…

Another source is The Roadster Factory in Pennsylvania. Their website is difficult to navigate so finding the area where the keys are listed is a treasure hunt. Between them and Triple C, they’re probably the best bet.

I had good results searching eBay UK, with various sellers offering original FRN, FA and FP keys. FS keys are plentiful.
There are more companies that offer WB locks and keys. I’ve no experience with these but it’s always worth a try.