This may be the wrong forum, but this reminded me of something stupid I did.

As the gearbox top cover needs to be removed according to the factory ROM in order to remove the engine from the MKV.

So I put old sheets, linenware on top of it to protect it.

18 months and many many stages later it was time to start the rebuilt 1947 3 1/2 Litre engine for the very first time. Well I thought no problem, the car will be in neutral.

After the gladness from the fact that the engine started and sounded great, a very fast ”ZZZZRRRRRRRRRRRTT” and the linenware was gone!

Of course the input shaft and layshaft were rotating with relatively high speed and the top of the rotating gear just needed to touch the fabric and it was gone! Sucked into the gearbox and turned into a pulp in fractions of a second! Yikes!!!

So yes, a great grinder for sure!

Well I needed to replace the gearbox oil anyways and a couple of toothbrushes and some fuel helped in getting it all very clean.

We should go over the purpose of the Glyptal (glycerol phthalic acid alkyd).
It was initially developed for sealing electrical coils and armatures in motors. Other uses include certain iron castings where bearings are involved, and archaeologists even use it for dinosaur bones.

When an iron object is made by pouring molten iron into a sand mold, there is a surface layer that is partially iron and partially sand, a transitional boundary layer. The thickness of this boundary layer is dependent on the sand quality and the iron pouring temperature.
It is apparently not a problem with aluminum castings.

The casting may then be shot blasted, but depending on the quality of the blaster, this may or may not get most of the sand out of the boundary layer. Some may come out later. Of course you don’t want sand particles getting into your bearings.

GM and Ford are apparently very good at blasting, so they don’t always put Glyptal in their engines.

The Jaguar factory or their casting supplier swabbed the inside of rough blocks and gearbox cases with Glyptal before machining. For awhile at least, Salisbury dunked their differential pumpkin rough castings in a vat of it. The diff in my '50 Mark V had none on the outside, but my '53 120 diff did.

Then the machine shop goes to work, and where the cutting tools cut the surface, the sandy boundary layer is removed. There was no need to re-do the Glyptal on those surfaces. That is why we only see it on rough cast surfaces.
But other paint such as chassis black on diffs doesn’t stick to Glyptal very well.

If the Glyptal is painted on bare metal and then baked in an oven at 300 degrees for at least 2 hours, it is very durable. We used it in bearing housings on pumps and steam turbines in the refinery I retired from. If it is put on right, it will not peel off. 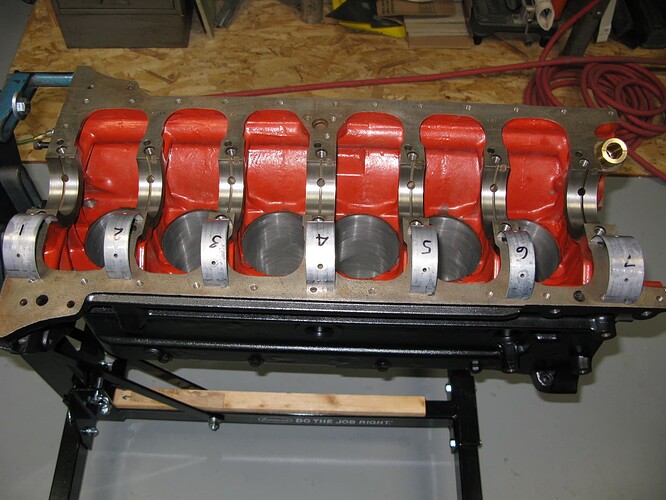 This poster will also agree with Erica on this one. I think for differentials and gearboxes it’s okay, but I’d be leery of re-applying it to the inside of an engine block. Far too many thermal cycles unlike what gearboxes and differentials have to go through. I’ve seen many blocks over the years where the majority of it has flaked away and left me wondering how much of it was caught by the oil filter and how much still resides in crankshaft passages, galleries, etc.? Some passageways are very, very small – that timing chain oiler passageway using the rubber block is a good example. I usually think of Glyptal – and paint in general – as basically glorified colored dirt with a binder worked in.

Now that we’re well into the 21st century – and speaking only for myself – if I were inclined to re-apply a coating to the inside of a block, I’d of course have it boiled out first (truly boiled out with a caustic – not just using an aqueous jet wash) followed possibly by a blast using non-abrasive crushed walnut shells, a second wash, then having the inside powder coated to a tint that matches the color of Glyptal.

My thinking with these sixty or seventy-something year old blocks is that any ingrained casting sand has either long since been washed out due to a multitude of thermal cycles and oil changes or any remaining at this point is still so embedded that it will never all truly come out. With this in mind, I leave the insides of blocks unpainted.

I’m not painting the inside of the block. I’ve used Ultraseal on pre-war magnesium sumps before, applied in a vacuum to seal against porosity, but that wouldn’t be appropriate in this case.

My thinking with these sixty or seventy-something year old blocks is that any ingrained casting sand has either long since been washed out due to a multitude of thermal cycles and oil changes or any remaining at this point is still so embedded that it will never all truly come out. With this in mind, I leave the insides of blocks unpainted.

Agreed: though it didn’t hardly come off in hot tanks, I never refreshed it.