FYI the Revival starts today. Lots of E’s, C’s, D’s, etc being pushed to the limits and beyond for the next 3 days…

They do indeed race, not just parade around, like so much vintage racing in the USA.

This is really cool and thanks for the opportunity to see this. Have a great day cheers!

I sat up to watch the Minis practicing, damn they get into some angles.
Also saw the tribute to Sir Stirling, the shear number and variety of cars he drove was amazing, shame they didn’t have the racing lawn mower on track that would have been a hoot. Apparently he entered a 24 hr race on it.

A couple of E-types (including 2 BBC) went HARD into the tire barrier during the Stirling Moss Trophy race….oh well, there’s nothing that can’t be fixed with cubic dollars.

They both appeared to be the result of a catastrophic engine failure in one of the E-types, which sprayed oil all over the track.

Shortly thereafter, there appeared to be another E-type engine let-go in spectacular fashion.

Those same two white E’s also had an epic battle last year and the Brundle E (1 PKL) also got bent badly then. Breaks my heart but I am sure they will fix it again. Here they are last year until 1 PKL got bent. 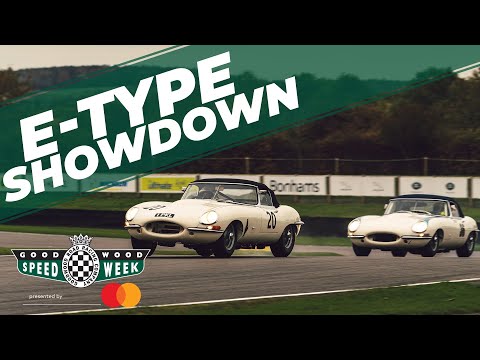 Breaks my heart but I am sure they will fix it again.

They will be fixed in a matter of weeks.

These cars are simply a tool, built for the entertainment of extremely wealthy people. Fixing their battle scars keeps scores of craftsmen gainfully employed.

The side-benefit is that the rest of us get to be entertained by them as well.

I liked when Jensen Button was asked about the pace of the lead E-types, and whether he could put his E-type on the podium, and he commented “They’re driving different cars from us”…nudge, nudge, wink, wink.

I think I also heard the commentators say at one point that the ‘Lightweight’ E-types would be running upwards of 6-seconds a lap faster than the more “standard” looking cars in the Sterling Moss Trophy race….that’s astonishing.

The best analogy I have heard is that these cars are like thoroughbred horses. Is it better to languish in the barn or be out running ? Running is my choice and thank goodness for the rich guys that love to do this. Still pains me when they get hurt though.

If I understood correctly in the commentary today, the 1955 LeMans winning D-type will be running in the Sussex Trophy race. I think it is number 6. Talk about a thoroughbred. I really hope it does not get hurt.

The best analogy I have heard is that these cars are like thoroughbred horses. Is it better to languish in the barn or be out running ? Running is my choice and thank goodness for the rich guys that love to do this. Still pains me when they get hurt though.

The one major flaw with that analogy is that race horses get a bullet to the head when they break a leg.

These cars are taken apart at the spot welds, and ANY amount of damage can be erased quicker than most of us could ever believe.

As the saying goes, “You simply can’t total a multi-million dollar car”

I just figure some battle scars from racing in these events just adds to a car’s ‘provenance’.

And yes…it’s just metal. Easily fixed…for them with deep pockets!

I’d much rather see an E Type wrung out like that, and get pranged, than suffer sitting on a grassy field, never hardly used.

I should have been there. I bought tickets, I had the vouchers to park my E in the reserved parking area. I had the clothes to dress appropriately, as I have done almost every year since 2008.

Instead someone else had my tickets, someone else got up really early to drive there during the dim light of dawn, eat breakfast in the GRRC enclosure, walk around the Sir Stirling Moss exhibit infield at Woodcote, wander through the the Earls Court car show, flash the badge to get a viewing of the lots for sale later today in the Bonhams auction.

I remained at home, isolating, with a live stream running on Goodwood’s YouTube channel all day. I could see the cars, watch the practice and qualifying sessions, and watch the renamed Kinrara Trophy race - Stirling Moss Memorial Trophy race into the darkness, not from the Woodcote Grandstand but from my sitting room.

Someone else took in the smells, felt the thunderous exhaust of the Cobras, the heat from the red hot brake rotors of the two E-Types racing for the lead in the last ten minutes of action on the track. Someone else mingled with the crowds, the massed, unmasked, crowds. And that is why I gave up my tickets.

I am isolating so that SWMBO’s brother remains COViD free while he waits for a cataract operation next week. I has flown 3,000 miles for it. It is a small sacrifice. I don’t hate him for it, no not at all.

Some compensation Chris but you see more of the racing.

We’re here, first time in three years, first time as a GRRC member, first time with my own car (although we did visit the Festival of Speed in 2018 with our V12 E-type OTS) but with the 1975 XJ6C, as we are four people with luggage.

Huge byreaucracy with traveling which I do understand, Belgium was pretty bad with roadwork and Eurotunnel was seriously delayed. And we didn’t break any records at Jabbeke! (Unlike Norman in the 1950’s, RIP)

BTW we met (accidentally) with E-type Pat! Lovely chap with a fantastic car! 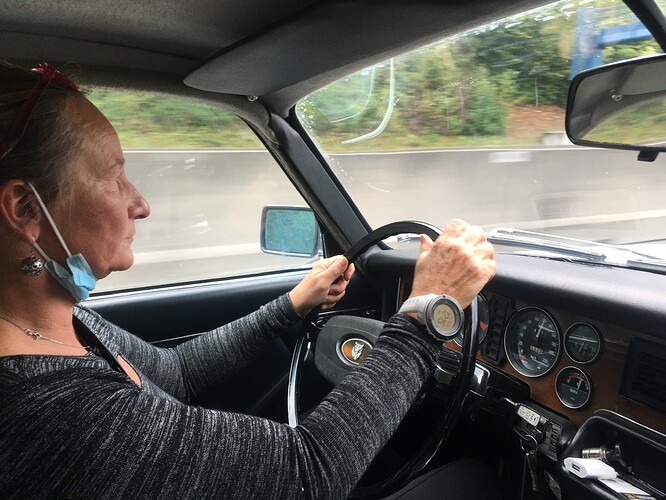 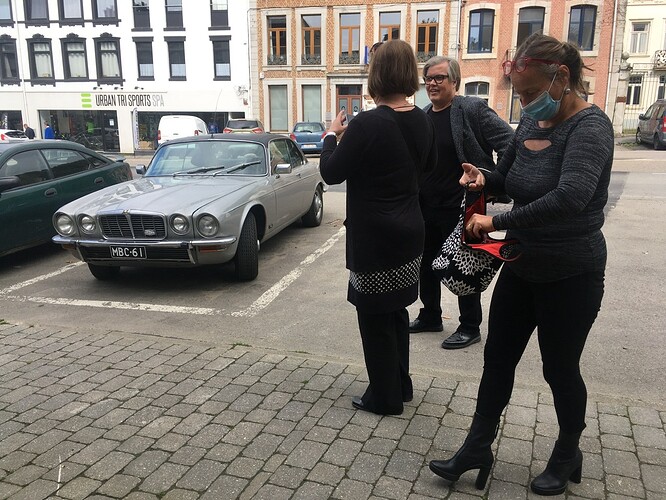 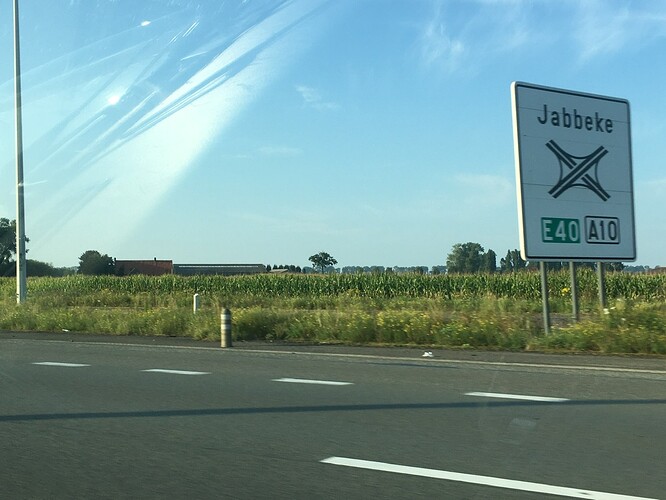 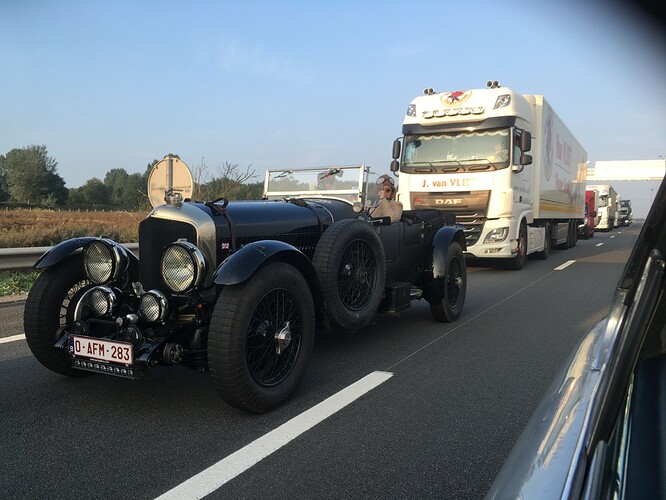 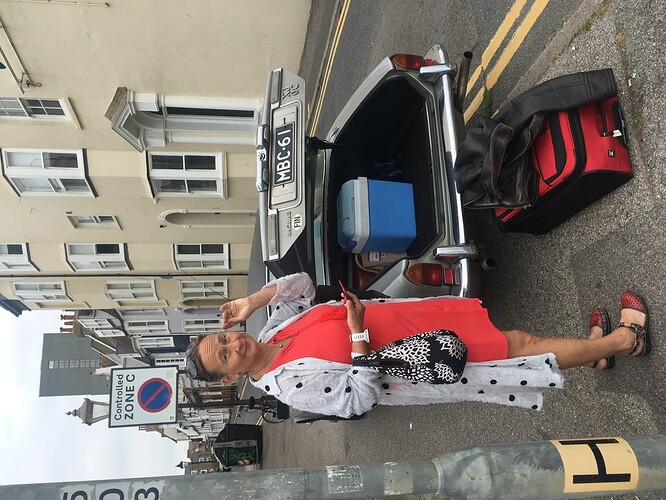 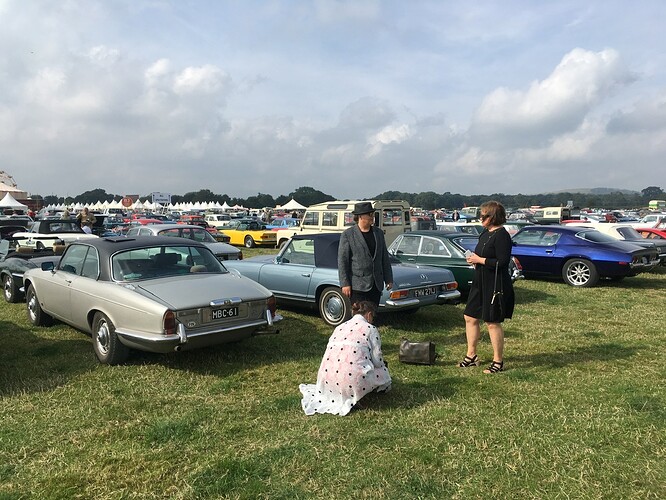 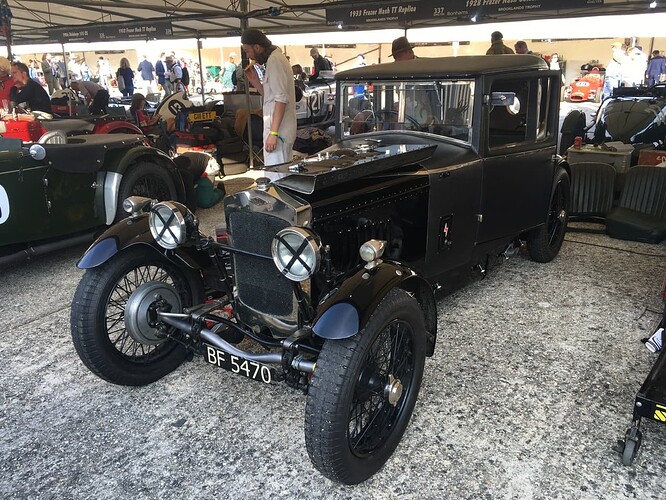 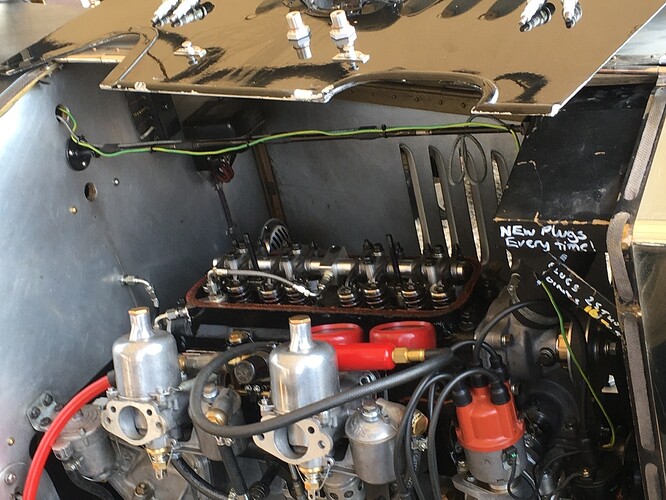 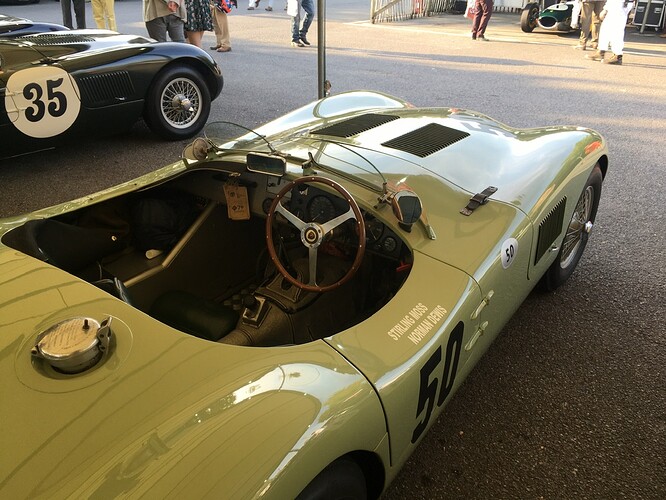 I should have been there

I should have been there too but I noticed too late that my passport expired earlier this year and could not get it renewed in time. I feel really silly about not checking my passport date earlier. I was also concerned about being overseas and then getting stuck in some sort of quarantine even though I have been vaccinated.

Wonderful battle for the win between the two ERA’s in the first race this morning.

It’s just a wonderful event
Hey if you see a maroon. Gt40
That’s our own Gary Bartlett!

Mrs J and I watched the Stirling Moss tribute this morning. The Mrs thought Lady Susie might be going to the great beyond to join Sir Stirling if she had to sit in the Mercedes on the tarmac any longer listening to the Duke’s speech.

I plan to set the alarm for 4 am tomorrow so I don’t miss a thing. Really looking forward to the RAC TT.

I agree, Richmond does prattle on rather too much. I don’t think anyone has ever told him that sometimes “less is more”. More particularly, a eulogy should not be a biography.