Greetings from Australia, and my XJ40 project

Now that the bootlid is painted and the wing has been fitted, and I have almost knocked it over onto the concrete, which I am sure will not do the paint any favours. I fitted it to the car for now.

rear end1063×802 217 KB
The sun was not in a good spot for this pic, it showed a bit of glare. It is not easy by some of these pictures to see the difference from the original racing green to the newer version. 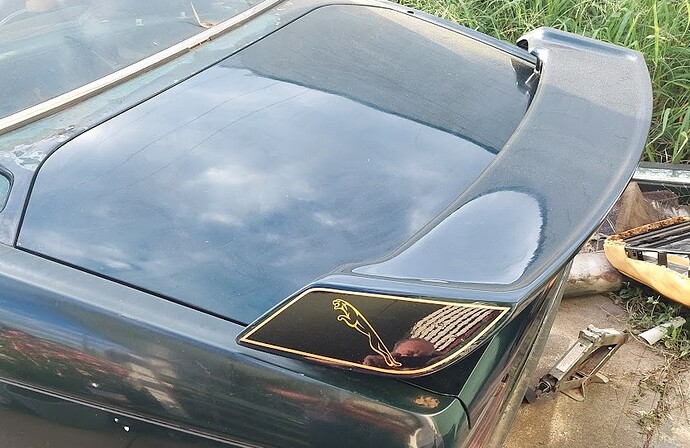 rear end 2834×542 163 KB
You get a bit of an idea about the Commodore rear wing here, the rest of the body parts will appear later as I slowly make my way through the debris before repainting the whole thing.
Now for the next item on the list. Remove the wiring from the engine bay, (and the rest of the car.) and see what else needs to be replaced while I have it all out. 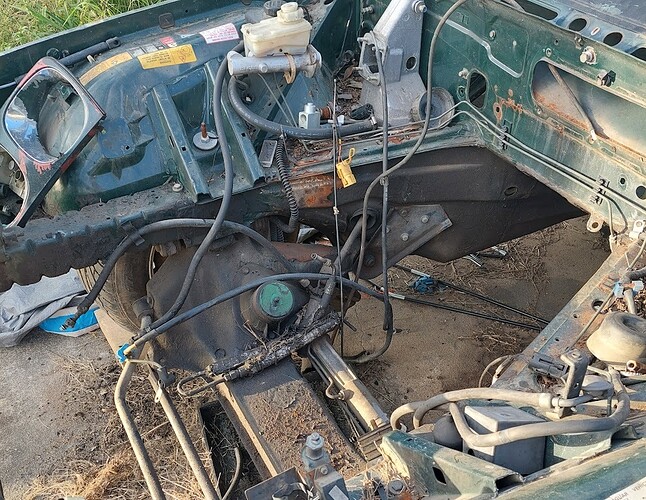 clearing engine bay.990×766 366 KB
I was getting a little bit worried about getting the Windsor engine in the engine bay after reading about the early body XJ40’s were made so the Rover V8 wouldn’t fit. 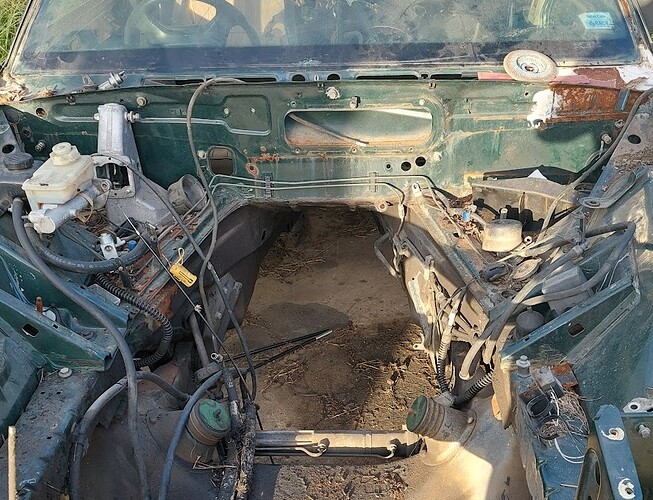 clearing engine bay 2889×680 273 KB
But I can see that is not going to be an issue here now. I have to get in and start moving all the stuff from the interior next I think. 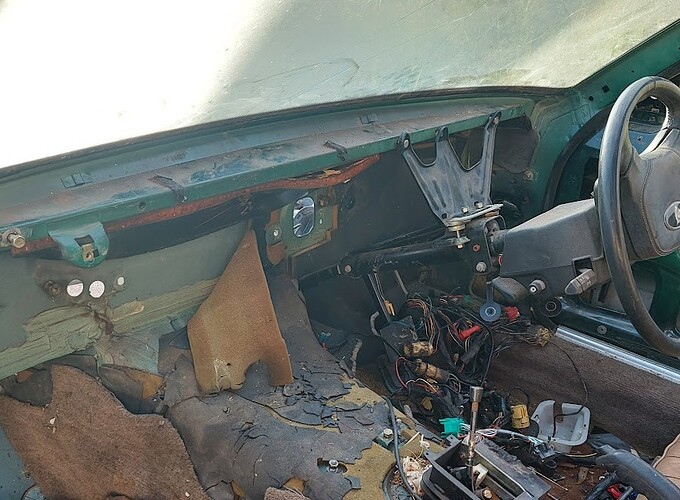 no heater857×630 172 KB
I am rather glad I took all the heater and air con out, the heater core is full of rus, and has a hole in the bottom, but the cooloing system has been empty for a few years, so it will probably only leak if I put coolant into it.Things will slow down quite a bit now that I have brought everyone up to speed so far, but there is a lot more to come.
1 Like
awg (tony) November 16, 2022, 8:59am #42

This wing I did like so I settled for this one, so off it came and along came the paint. My theme with this is green with black accents, and a gold pinstripe to separate the colours.

I did a stupid thing, had a “correct” XJ rear wing, but cause it offended my purist streak, when I was having a parts cleanout, I chucked it

Rockhampton would be rust hell for cars, due to salt air and high rainfall, like here

They rust from the inside out, and top down, unlike US salt road cars

I have a wild imagination at times, and If i like it, I will use it. like this car; I have never owned a Jaguar before, and I thought of restoring this one when I got it, then I noticed some people were changing things and I thought hell yeah. I often take a walk around our wrecking yards nowdays for some inspiration. Yes I have a Torana SLR bonnet scoop, VZ Commodore flutes in the front guards,BF XR6 Falcon Rebel sideskirts, and a VE Commodore wing on the boot, and looking into making fibreglass bumpers, but as far as the body kits go; that will just about do it for me. I am also taking to a lot of panels with a gold pinstripe, and it is making me feel good. I have seen plenty of cars I personally do not like, but that does not stop me from admiring a persons work.

I love seeing XJ40’s brought back to life so I’m really enjoying this saga. My car is the Jaguarsport/ TWR version, it came with the front, rear and side skirts as standard from the TWR factory in Rugby but by the time they made mine they had deleted the boot spoiler/ wing. It also has a different induction manifold than standard XJ40’s, the steering rack was re-valved to give more feel so the steering feels heavier than standard cars, it has different cams too, thicker AR bars, different road springs and Bilstein shocks all round. Apparently only 450 with the boot spoiler were made and another 450 like mine without it so it’s quite a rare car now.

Yes! well I do have a funny thing about special vehicles, in Australia we have our Brock Commodores and Torana’s, our GT Falcons, nowdays HRT Commodores and XR6 turbo Falcons to name a few, these I would not be doing anything other than total restoration, Mine is a common garden variety XJ6, but I have a sovereign as a parts car, not that I can see anything really different between them, so with these I am happy to just make it up the way I would like to have it, and as time progresses you will see a Ford Windsor engine going into to it, I am thinking this will probably be my last rebuild. I love the sound of a V8 engine, and some cars look better with a body kit, yet on others it looks pretty bad, the last GT Falcon made here was quite an ugly vehicle to me but that is also just me.

Mine is a common garden variety XJ6,

Yes but it definitely won’t be by the time you finish ! It’s looking great already, I too love the sound of a V8, I’m looking forward to seeing and HEARING it.

Well yesterday was a scorcher here in Rockhampton, but I have finally started putting the finishing touches to my bonnet. I have reason to believe that we shouldn’t get any rain, however it will be overcast and could get quite hot and steamy non the less. 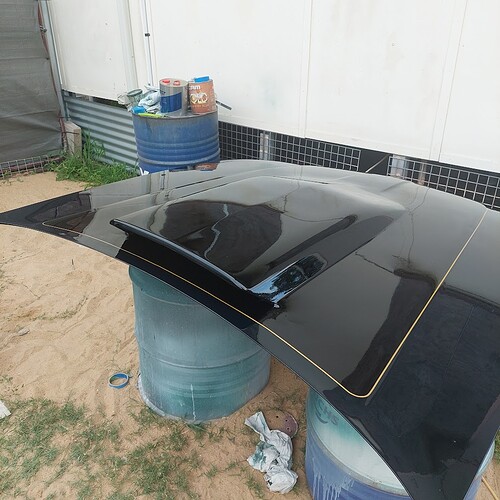 new scoop 2993×993 222 KB
This will be my first coat of clear so I won’t bore you all to deathe by posting each coat. I may not have a chrome leaping jaguar on my bonnet, but it does still carry a leaping cat non the less. 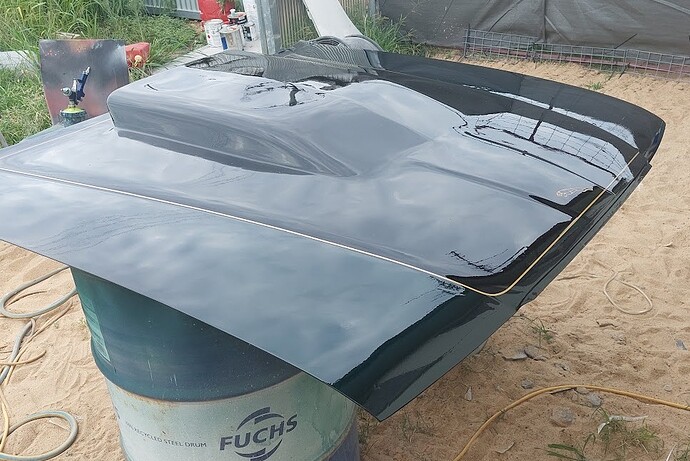 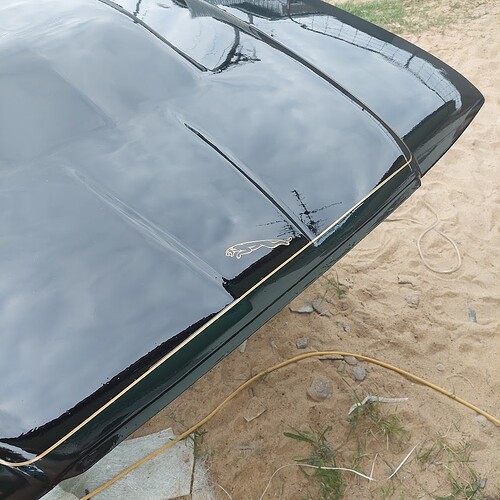 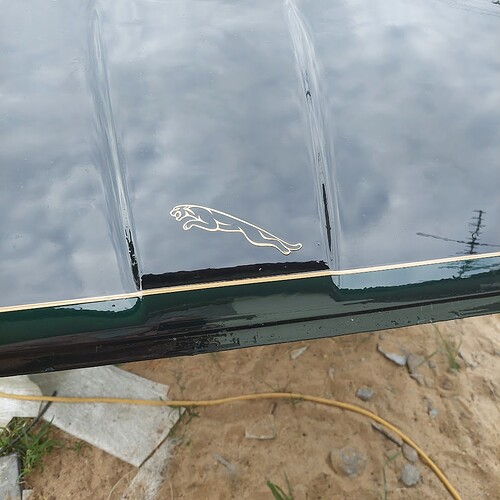 I may not have a chrome leaping jaguar on my bonnet

Neither, bugs, the little critters that like to ruin just about everything I am trying to make look good. Fortunately this is a sealing coat to get everything all sealed in case of rain.

Yes there are a few clouds out here today, I am kinda lucky to have a well ventilated area, hehehe (No shed.)

Well today I sanded all the bugs to the same level as the clearcoat, end result is the bugs don’t look quite as noticeable. 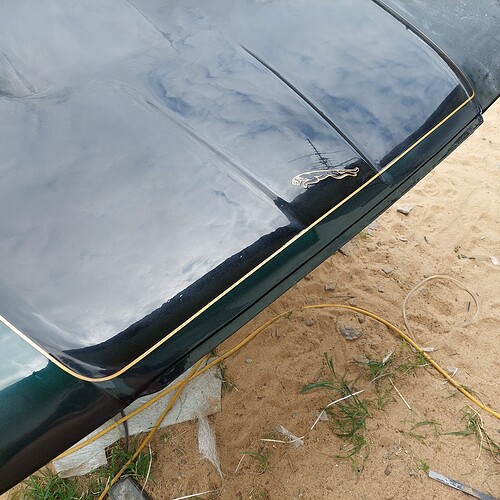 I also don’t get many shots where the green can be seen with any sort of light in it, as you can see in most of the shots so far, it looks very much like a dark blue, bordering black, and a faint shade of green if you are lucky. I did however manage to get a bit of a shot of the green while I was anding our bugs flat. 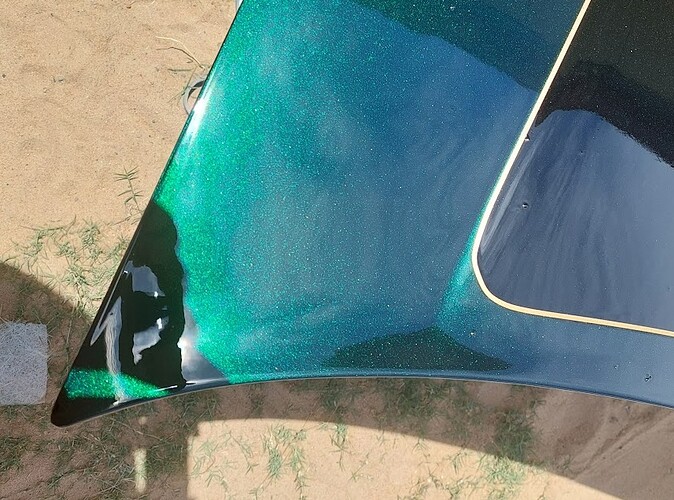 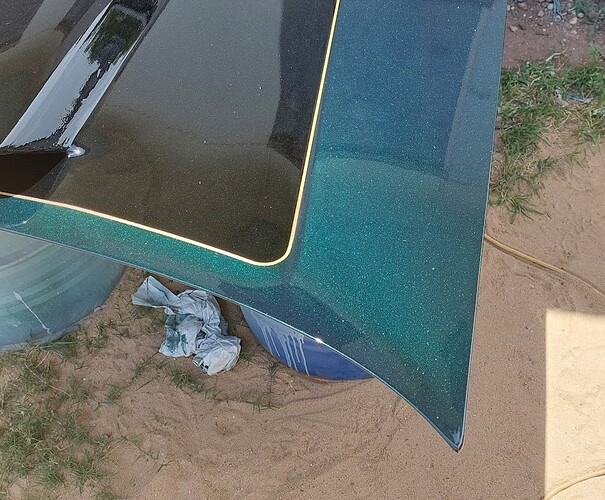 Love that color! Looking forward to seeing the finished product.

Reminds me a bit of BMW Oxford Green

Love that color! Looking forward to seeing the finished product.

I do like the colour as well, the car was originally racing green, and this is a 2020 Jaguar racing green. I have discovered that when side by side they actually look very similar.

Reminds me a bit of BMW Oxford Green 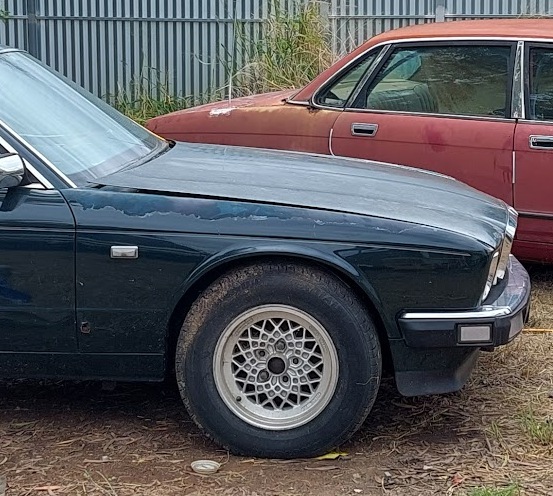 I really like the colour, it reminds me of a Mitsubishi I once had