H2O Gage or Sender, Which is Defective?

Temperature has been gradually showing higher than normal lately. Instrument voltage is 10V. Temp. in header tank about 80 C, measured via IR pointed directly in open header tank (would use T/C, but I can’t find it), gauge reads 110 C, pegged. I suppose the T’stat could be stuck only partly open restricting flow and temp in manifold is really 110 C, but I doubt it. I would like to determine defective component short of blind replacement. I can’t find a temp vs resistance chart for the transmitter. I understand there are two adjustments available in the gauge, span & point, I think, but that would be a futile exercise if the mechanism is going south.

Probably the sender but more information would be useful.

With the engine cold, ignition switch on, is the gauge still pinned? If not, what does it read?

If it is pinned or reading high with engine cold, try removing the wire from the sender–does the gauge return to zero?

What do you mean by “Instrument voltage is 10V?” The instrument voltage regulatlr, IVR, should alternate between 0V and 12V, unless you’ve replaced it with a solid state regulator. But the OP sender operates from 12V directly, not the IVR. It has its own internal IVR. If necessary it can be tested directly but probably not necessary. IMHO.

The original poster is asking about the water temperature gauge which is powered by the 10v VR.

David, thanks. Whoops, I really blew that. I think I did the same recently–mixing up OP and water temp. Sorry.

Must be, besides senility, that I’ve trouble over 40 years with OP senders but never a bit of trouble with temperature senders.

What do you mean by “Instrument voltage is 10V?

With the engine cold, ignition switch on, is the gauge still pinned? If not, what does it read?

This morning, before starting the engine, with the car essentially at ambient the gauge read about 40-45 degrees, ambient 30 degrees (Phoenix), ignition on.

Rod, so sorry to misread your OP.

Presumably the gauge is indicating too high a temperature, except that there might be a greenhouse effect under the bonnet. But with the louvers I doubt it. If you remove the wire from the sender, does the gauge go down? If it doesn’t, the gauge is likely the culprit. If it does go down, it still could be either. I’d see if someone here can give you an ohmmeter reading of his sender at ambient (ideally close to 30C or 86F). You could then check your sender with an ohmmeter, and substitute a resistor of the correct value for the sender, to see if the gauge reads correctly. I probably have a spare sender or two, but I’m not sure that the early XJ sender is the same as the E-type. IMHO.

I had to replace the temperature sender on my SII OTS yesterday. I looked on the web for a chart of what the resistance values were for various temperatures and couldn’t find one, so I built one. A rough ‘‘rule of thumb’’ can be given in a few words: My investigations indicate that the resistance starts out at about 890 ohms at 40 degrees F and decreases roughly 15 ohms for every increase of 5 degrees F. These were taken by immersing a new sensor in a tub of mineral oil along with a …

Presumably the gauge is indicating too high a temperature, except that there might be a greenhouse effect under the bonnet. But with the louvers I doubt it. If you remove the wire from the sender, does the gauge go down?

Don’t think it’s greenhouse effect; all troubleshooting was done with bonnet up. Sensor disconnected, pointer goes far left (30 degrees). Thanks for the Impedance profile thread. I should be able to check the sensor with that info. I just did not use the correct terminology when I did my search, I guess. He had a good point, the sensor must be disconnected when taking resistance readings. Thanks for the help.
Rod

I used the table info provided in the post, but found the numbers way off, I measured 173 ohms, the table indicated 725 @ 95 F. I looked at the other posts in the thread and Ray L. questioned the table too. Ray indicated that at 70 C the resistance S/B in the range of 70 ohms. I measure 67 ohms @ 70 C. Don’t know if thats enough data to declare the sender good. I think I will either go for a new gauge or fiddle with the two adjustments on the existing one.
Rod

I suppose the T’stat could be stuck only partly open restricting flow and temp in manifold is really 110 C, but I doubt it.

I painted a flat black dot on the manifold near the sender as a target for the IR gun. 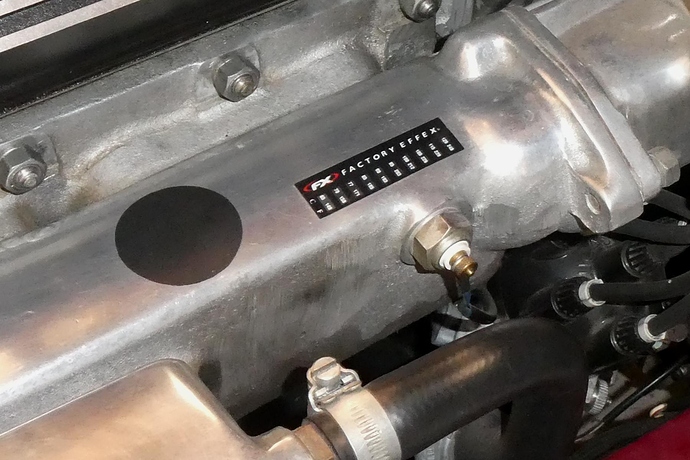 There are many places to check and assess the temp situation, but that one lets you check what the sender is ‘seeing’

I have one also and I had a problem with it that caused its output to increase over time and peg the gauge despite being a perfect 10v at startup. I’m having a hard time recalling what it turned out to be but I think it might have been a poor ground. Definitely check it more than once to be sure it’s putting out what you think it’s putting out.

I dealt with this a year ago on my 69 S2. Temp gauge showing way higher than usual for this car, driving in spring Wisconsin weather, gauge usually indicated in N-O range. Then it started to indicate higher temp. A-L. Hadn’t replaced the temp sender for quite a few years, so started with that. The senders aren’t expensive, and are fairly easy to replace. Also checked upper and lower rad hoses with temp gun. Temps weren’t out of acceptable range. The other thing was the radiator, the OE unit to the car and recored about 30 years ago. I opted to have it replaced with a Coolcat aluminum radiator, which was ready to accept all the fittings for the car’s factory air. I also bought the Coolcat fans, since the ones on the car were also 50+ years old. Car is back to running in the N-O area on the gauge. When Coolcat got the solid state VR for the fuel/ temp. back in stock, I put one of those in too. I’ve decided that, with this car and when the OE parts start giving it up, to just consult this forum for suggestions on modern technology replacements. When the OE distributor with a Pertronix module in it died last summer, I went with a 123 electronic distributor. Just my experience, hope you’re able to sort things out.

I painted a flat black dot on the manifold near the sender as a target for the IR gun.

Good idea. I did that, the temp. measured at the dot, brass threads on the sensor and the header tank (IR gun pointed down the throat) all read within one degree C, with the engine running to provide circulation. Also verified that the fan comes on at 82/83 degrees.

I have a constant 10.1 V. Your post prompted me to check the ground, which was a puzzle. The unit is plastic, mounted via a plastic leg, with a toothed washer in the mounting hole. I decided that the washer must must be somehow connected to the inner workings.
Rod

Is it one of the ones from Cool Cat that Mike Eck designed? If so he could answer that. I tested a prototype of it many years back and haven’t really needed to look at it in a long time but I do seem to recall a ground issue. I can’t recall if it was solved by an extra ground strap or just correcting the way I had it fixed to the panel.

The internal-toothed serrated washer is indeed the ground connection for the IVR. However, if you have measured 10V between the output and the chassis ground then it is working correctly.

Here’s a trick for you. The oil pressure gauge and the temperature gauge are identical internally, the only difference is the face. Swap the temp gauge wires to the oil gauge and observe the reading. If it’s about the same, then the problem is the sender or high resistance in the wiring.

The oil pressure gauge and the temperature gauge are identical internally

Is it the oil pressure or the fuel level gage that is internally identical with the temp gage?
Rod

I have been fussing (fettling?) with the two adjustments on the gauge, with some success. They are very twitchy! One moves the pointer violently, sometimes it disappeared completely. Once I got the pointer roughly in the center of the face I used the other adjustment to match the actual water temperature, but it too was somewhat twitchy. I now have it reading about +/- 3 degrees of actual, but with marks in 20 degree increments, had to interpolate.
If it continues to read that close I am good to go. If not, I guess its time to substitute
Rod

Is it the oil pressure or the fuel level gage that is internally identical with the temp gage?
Rod

Actually, all three are the same gauge, but I guess the fuel gauge is a bit closer.

If you’re using one of my IVR’s, you can use the potentiometer to tune the gauge.