Maybe I should have done this long ago, like two decades ago, but I tried to replace the throttle plates on my carbs, as during the last MOT the float in my rear H4 carb started to sink and I removed the carbs from the car.

I had replaced all seals and the jets about 14 years ago and IMO they were running nicely, but lately, after the engine rebuild I could not really get the idle to stay below 600 rpm when fully warmed up, even with the throttle plates supposedly fully closed. So i thought I’d check them and replace the throttle plates and see if there was any extra clearance in the shafts etc.

Is there any special trick to get the throttle plate locking screws loose?

I tried soaking with penetrating oil for a couple of days, giving them as much heat as I could, but still, in the end I had to drill out both screws from the front carb. Now I am afraid I will have to do the same for the rear carb. The screws are all black and the look like they are rusted solid with the brass shaft.

Anything else I could do? Anyways I had a new float and all the seals etc.

What do you think, should the shafts be machined a bit so they could accept some kind of seals? Now it looks like there is only a brass bush in one end and nothing in the other end of the shaft on the carb body, right?

Burlen UK says on their website: "Throttle Spindles are now made from manganese bronze as this material is more resistant to alcohol Fuels than Brass. All SU Spindles are precision ground to size and slotted to mate with the appropriate Throttle Disc . "

Throttle Spindles are now made from manganese bronze as this material is more resistant to alcohol Fuels than Brass. All SU Spindles are precision ground to size and slotted to mate with the appropriate Throttle Disc .

So is that true? Could 5000+ miles on ethanol fuel eat up the brass parts enough to produce too much clearance and too high idle?

Also the new throttle plate locking screws look as it they are now stainless or plated, the old ones were round slotted head mild steel and black, so the six years in England and 14 years in Finland have the screws rusted solid in the shafts I guess?

So I was hoping just to replace the plates, but now it looks like I would have to order two of these as I am likely going to have to replace also both shafts etc.

Rebuild Kit - For a Single D4L or H4 Thermo Carburettor. Includes a full set of Gaskets and Seals, main Jet, Needle Valve and seat for the Float Bowl, Spindle and Bushes, Throttle Disc and Screws. 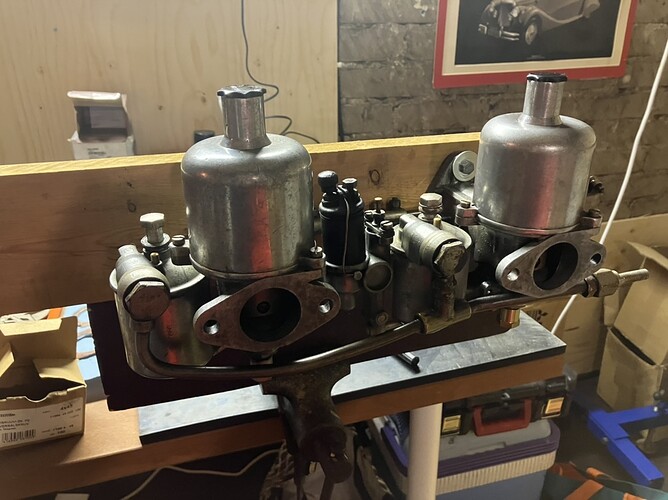 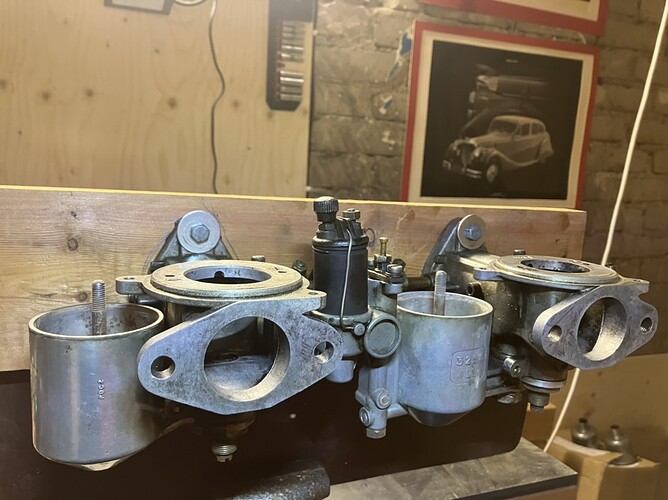 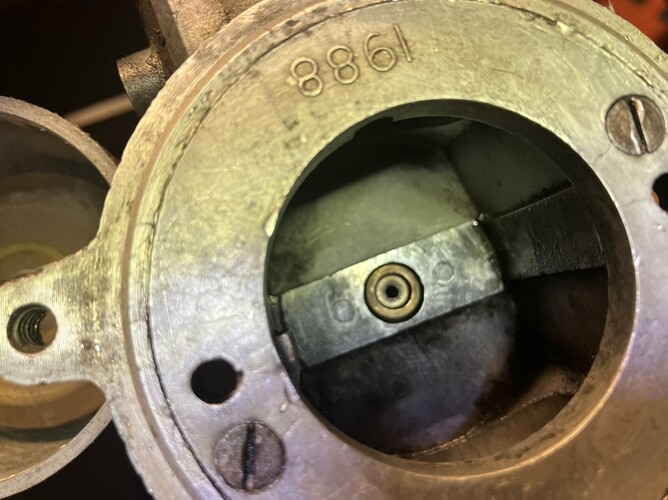 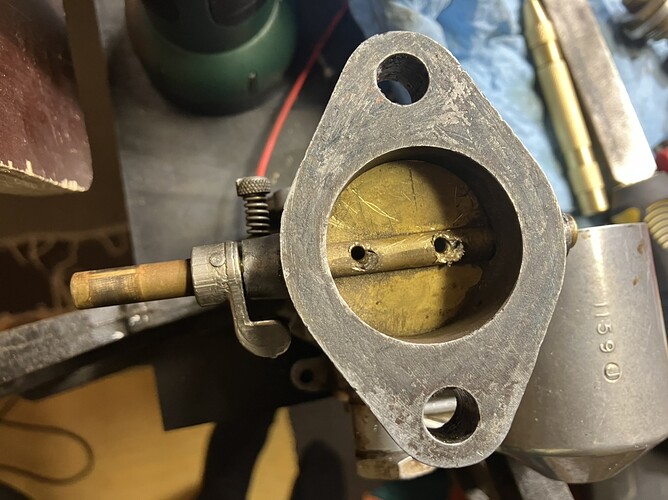 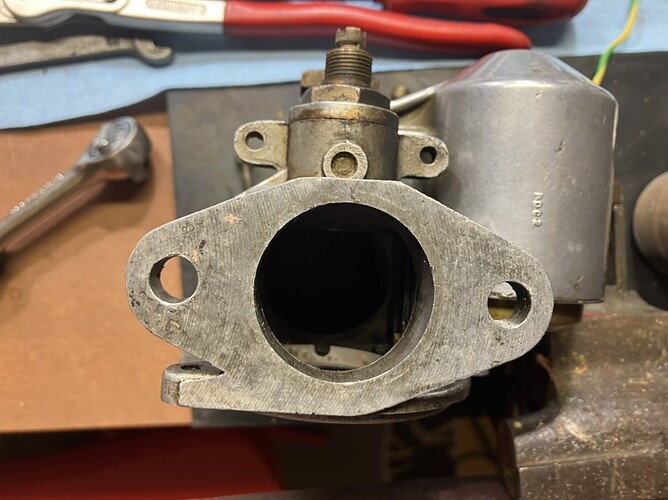 Hi Pekka, sorry to hear about the carb troubles.
The throttle plate screws were peened on the end after installation at SU, which is why they would not simply unscrew. That was their way of ensuring they wouldn’t fall out.
Running for years in dusty conditions without air cleaners could cause worn edges on the throttle plates.
There is also a side load on the shafts due to the return spring, which can contribute to shaft wear. Later model carbs had a concentric spring which helped prevent this.
Re-bushing the shafts is a fairly common practice these days. That is what I would do.
Sunk floats is a constant worry, and I always carry a spare, but they can sometimes be repaired. Put a match to them and the leak will burn like a tea candle, so you can see where it needs resoldering.
Nice wall art.

The throttle plate screws were peened on the end after installation at SU, which is why they would not simply unscrew. That was their way of ensuring they wouldn’t fall out.

Thanks, yes I know that, I had no trouble in the past undoing the throttle plate screws on my Ser 1 E-type 4.2, but maybe there is also more room on the HD8’s and perhaps bigger and better screws. I did try to pinch the ends of the screws back and use long pliers etc but they would not budge before getting completely drilled out.

I suspect that is also going to happen with the rear carb.

Pekka — I think that if I were in your position, I would seriously consider completely rebuilding the carbs. After all those years, and various repairs, I would think this is warranted.

The parts needed are surely available from Burlen. Or from Joe Curto. Joe could probably rebuild them if you’d rather not do it yourself. I realize that sending them to Joe would require extra time and shipping expense in your case, but then you could have the confidence that your carb problems would be behind you.

My approach is to usually do a total carb rebuild whenever I acquire a new-to-me car, or am otherwise having big problems. With the H-series carbs, you can upgrade the cork jet seals to use Teflon o-rings. It used to be common practice to fit oversized throttle shafts, and drill the bodies to match, but I think the better approach is to fit new standard-size throttle shafts and drill the carb bodies to take brass or bronze sleeves (bushings).

In any case, doing a full rebuild should minimize or eliminate future problems.

Just my “two cents worth”.

The throttle plate screws were peened on the end after installation at SU, which is why they would not simply unscrew. That was their way of ensuring they wouldn’t fall out.

IMO they were running nicely, but lately, after the engine rebuild I could not really get the idle to stay below 600 rpm when fully warmed up, even with the throttle plates supposedly fully closed.

When I was in my late ‘teens’ I worked at a carburettor restoring company during the holidays for some experience. Even back then I was drawn to the ‘older’ carburettors as I liked both the simplicity and the overly engineered way they were made. I rebuilt quite a few of the older SU’s as well under the guidance of the owner. When there we used to drill out the throttle bodies to make them ‘true’ then fit and ream Teflon bushes which would never wear out. If the new throttle shafts were unavailable due to age then I would braise and grind them, or ‘true’ them on a lathe. New shafts are a good idea as well as bushing the bodies. You can do it on a lathe with a drill bit in the chuck and the slide with the centring tool, then tap in the bushes. Or you could just pay someone to do it but I know you like a challenge. If you have too much wear in the throttle body then it lets in air and you will never get the motor to idle reasonably. Interestingly, I have never encountered a worn throttle butterfly but with the new fuels perhaps they now become frail? When you put the butterfly discs back in just make sure that you put the chamfered edge in correctly so it seals. ‘Truing’ the butterfly discs in the throttle body before tightening the shaft screws is essential too.

Rob is correct about the throttle shaft screws. They were drilled out at the base then spread out with a punch at the factory to stop them working loose. Those were the days before things such as ‘Loctite’. When you install the new screws just ‘Loctite’ should suffice though if you wanted complete peace of mind then you could use a centre punch on the bases but don’t forget to support the head of the screw with say, a bit of brass in a vice or you’ll bend the shaft!

As for the cork seals I was taught to soak them in brake fluid overnight (probably the mineral type) as this softens them up and helps them to seal straight away. Dry ones always leak.

These days you can have all the alloy bits ‘aqua-blasted’ and they look fantastic. I don’t know if you want a ‘shine’ on them or not though they look great and you could get the air plenum done at the same time!

Other than that I’d love to see how you get on.