I have a factory hardtop for my 71 S2 and need to be able to install, remove and store it –working solo. I think my ceiling is high enough to allow something like this (but with an electric hoist): 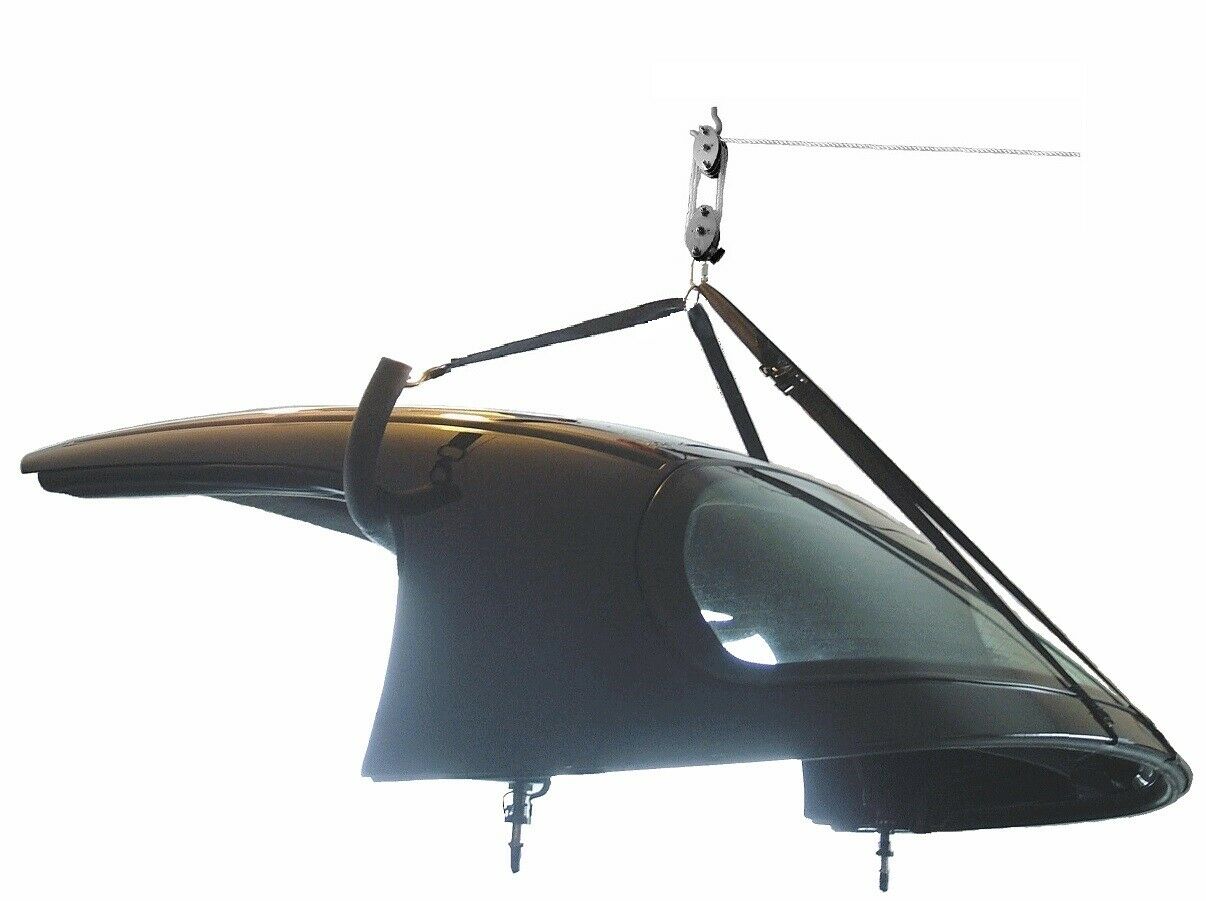 There are many ready-made versions for Miatas and Corvettes but I saw none for the E-Type.

Has anyone here used such a set-up? Photos would be great in addition to a description.

I tried the archives but the search was not strong for me and the few threads with links and photos were old and dead ends.

What brand is this one ? Seems to work fairly well. I have the HF motor but the hardtop
is still leaning up in the back patio. Am starting to wonder if the hardtop is a pink elephant…had no worries until I bought it…Ha Ha

What brand is this one ?

It is one listed on eBay but models shown do not include the E-Type:

If you own a convertible and a hardtop to go along with it, you should seriously consider using a hoist or lift to mount and remove the top. We won't start assembling your hoist until we receive your response.

Anyway, I’m not seeing $240 of materials and craftiness there - but I liked the photo and the proportions of the example top are lot like the E.

I think the main cross bar could be formed from metal conduit covered with foam pipe insulation. The rest is just straps and hooks (or chains or cables).

I looked into this exact one hanger and decided against it because of the rear hook. It would ruin the rear seal and put too much strain on the slim rear beam. There is one from the UK that is specifically made for an e-type. It has two pads that reach in through the window holes and rest on the headliner and a third pad that presses down on the top, center, front. The pads look like polishing bonnets. It looks like it would work okay but it’s quite expensive, over 500 bucks. It would also be a bit risky because of the metal top beam so close to the paint.

I have an idea for a design utilizing the side mount brackets, it would be a metal tube with nuts on both ends, cut to fit exactly between the side brackets. Then two dowels with threaded rod on the end screw into the beam that can be used for lifting or hanging. I’m not sure what the center of balance is it that point though. If it’s rear heavy, a slight weight could be hung from the center clamp to bring it down when hanging from the ceiling.

Alternatively, bike hooks could be screwed to the wall and the side rods could be hung in between them.

…the rear hook. It would ruin the rear seal and put too much strain on the slim rear beam…

I’ll ponder that. The rear straps & hooks could be spread to be closer to the corners and the amount of force exerted there would depend on how close the bar is to the balance point.

I would also have some sort of back-up in place in case something failed or slipped.

True but it would still deform the lip seal. I think the Miata top has a recessed bulb seal which wouldn’t be bothered by hooks.

Here’s a ridiculously priced solution (for what it is) if you have wall space:

This kit includes two steel brackets that allow you to mount your hardtop safely onto your garage wall. Hardware require to fit the bracket to your wall isn't supplied. Easy to fit and easy to use. We specialize in new and second hand parts for...

Not sure if this’ll work given you want to have a hoist.

Anyway, my #1 priority is to be able to r&r the thing solo (and within my limited strength).

Unless those brackets have some kind of positive attachment to the steel side brackets then I wouldn’t trust them. One bump and it could slip off and that would be an ex-hardtop. And yes, absurdly expensive. I don’t think it does positively attach though because it appears that in order to sit like that they have you remove the side clamps. A much better design would be a wall mount bracket with a half inch steel tubing mounted horizontally. Hold up the top, and line up the side clamps with the tubing and shove bolts through. Screw a nut on the end a couple turns for safety, done. The clamps will mar the wall a bit but no damage to the top.

Someone show me the hanging details, and I’ll knock’em out for $100!

I unfortunately don’t have safe wall space unless I made it an objet d’art in my living room.

I think the best design would be a couple strips of 1x4 spanning studs, foot long steel straps like in the photo, with holes on the ends for large screws or lag bolts to attach to the wood. Then horizontal tube in the middle on the back side of the strapping. The top brackets protrude about 1-2 inches Slip the top brackets between the tubing and slip bolts through the holes, done.

Draw it up: Ill knock out the metal bitz for ya.

Hello there, as I couldnt find anything ready made for my needs I just made my own bracket that rest on the original brackets without ruining the seals. I am sure you will be able to attach this to a bike hoist in the center. By using the original brackets you can undo one side at the time in order to avoid it slipping which could do damage. But the best solution is to ask your neighbour to just give you 5 mins help twice a year! Good luck. Thor 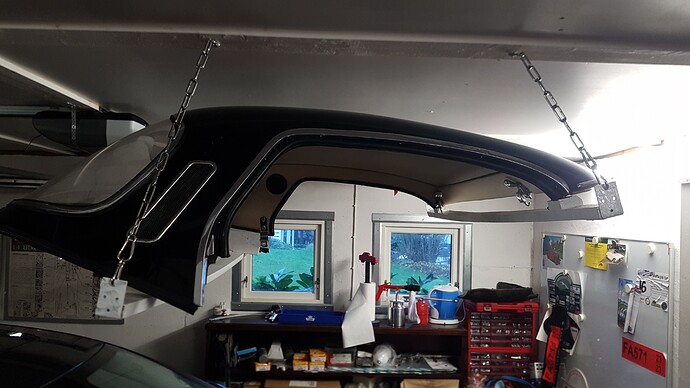 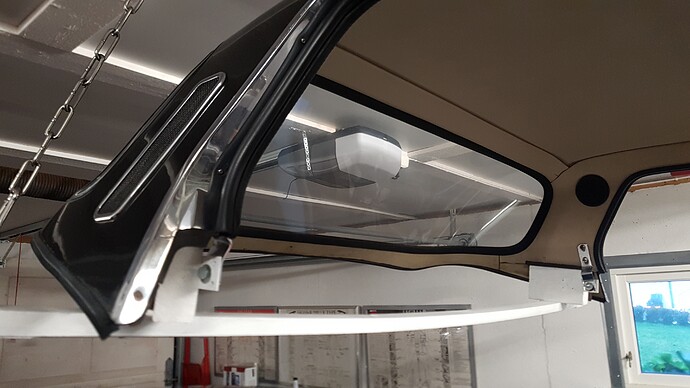 I have the hoist in place and a crossbar it looks like it will work: 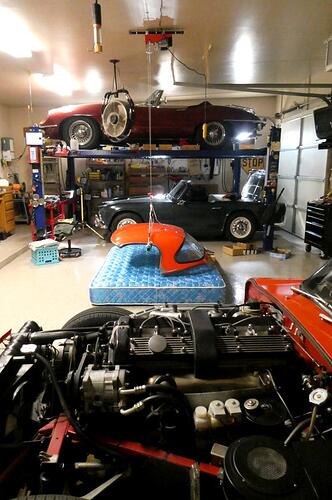 A mattress destined for heavy trash pick-up was just the thing for the trial & error fitting. 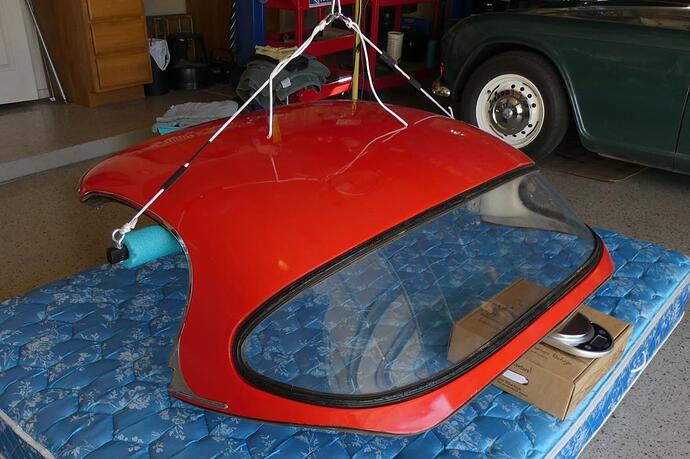 The rear edge supports only need to carry about 5½ lbs and I plan to spread that load with two wide ‘hooks’ so I do not think there will be a problem back there: 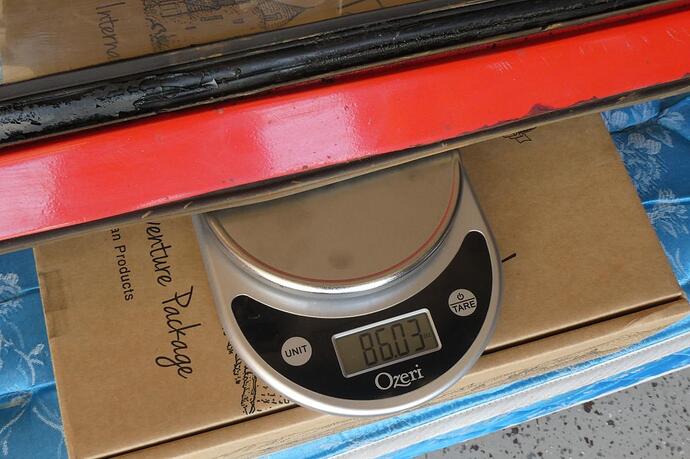 Yes, I have the chrome trim for the rear light. They were coming loose so I pulled them off for safe keeping.

Geo, if you have another set of hands could you test how balanced it is if it’s held by the side brackets?

If there is five pounds at the rear using that center point you’re showing, I’m guessing that the front will dip if held by the brackets.

Geo, if you have another set of hands… 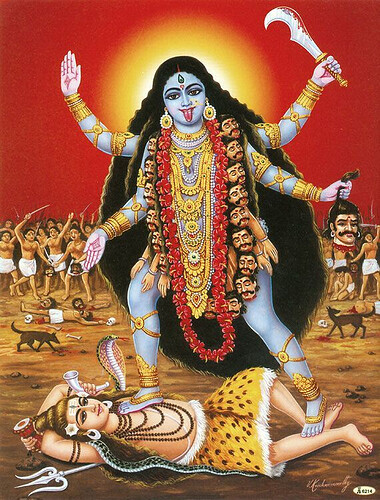 Actually, the side brackets are not on there at the moment but clearly balancing that far back would make the whole thing front-heavy. That would have some advantages (front edge is stronger) but I like how easily the main support can be withdrawn after the top is secure on the car.

This is very much a ‘driver’ so while I want to avoid damage, the seals and headliner are far from pristine.

Yup, I’m just thinking about my idea for a new purpose designed e-type hanger that would utilize the side brackets. If it’s really nose heavy, I’m not sure how to support it. Perhaps a “spar” could be welded to the center bar, pointing backwards, and it could be weighted as necessary until balance is achieved.

Those foam pieces get fit where the edge of the pipe cut touches the top: 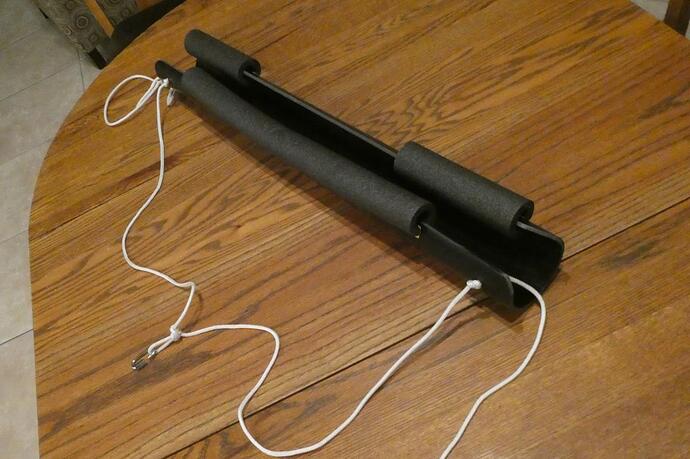 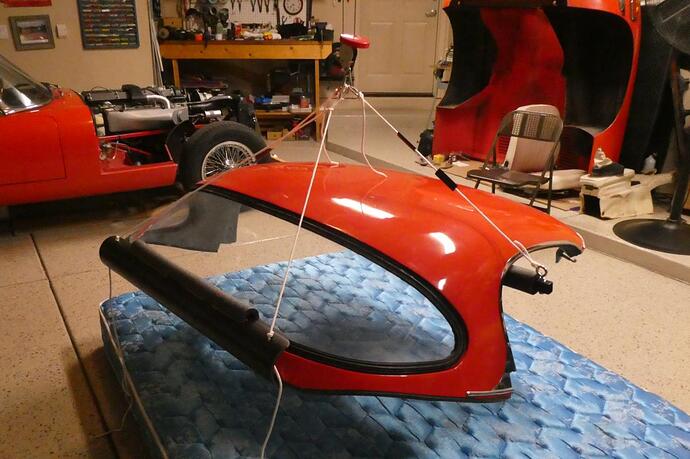 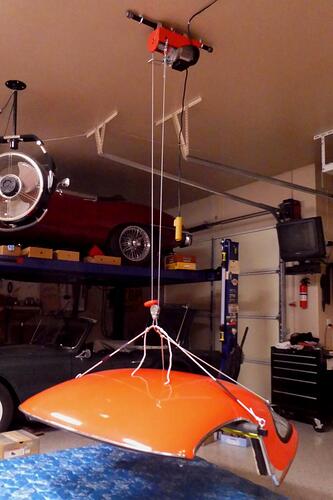 When fully raised its lowest point will be 42" from the 10’ ceiling. That’s enough for me to walk under it. Anyone with lower ceilings (or standing taller) will need to consider that.

Foucault (or Galileo) make it slowly twist but the final raising will see the 4 corners tied to 4 ceiling hooks to steady it and provide a back-up for the hanging mechanism.

I pondered using steel cable or chains but rope is so easy to work with & adjust and the weight involved is well within its working load limit. The only thing about that rope is that it stretches - so I will need to measure again once it is finished stretching.

Final photo of the finished install: 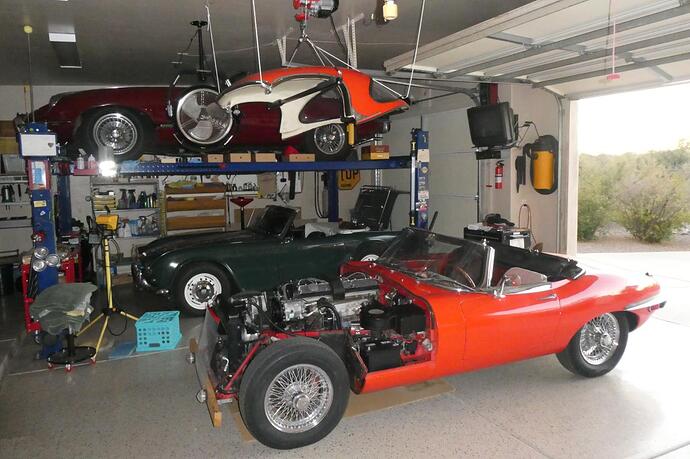 It will be (maybe, at least) 4 months before I lower it onto the car but for now it is safe and the guest room bed is available again (not that I want any guests).