My XK 140 engine is getting ready to roar after 45 years in hibernation, but I have hit a snag. The engine was fully rebuilt, it is back in the chassis and I have been preparing for its first start. I static timed it, adjusted the carbs, and primed the engine by pumping oil into the gallery. Prior to firing it up I decided to turn it over slowly by hand and discovered something concerning. The crank turns quietly for about 90 degrees of its rotation, but the remaining 270 or so degrees of movement generates a raspy sound from the lower front, maybe the lower right front. The noise starts and ends at the same spot on the rotation each time. I attempted to attach an audio file, but JL will not accept one. By raspy, I mean a sound which is not metal on metal scraping, but one which has an oscillating rhythm to it. My best guess is the timing chain (which is new) is rubbing on something, but I cannot figure out why it would come and go rather than be continuous if something is rubbing. Any ideas?

One weird fact. I put 12 quarts of oil into the engine, 10 of it through the gallery. I can see that it made it up to the cams through the oil cap. But when I check the dip stick, the oil barely touches the end. Where did it all go? And could it have anything to do with the noise? The engine builder says he turned the engine over numerous times without any problem and he is a trustworthy guy.

You would lose some oil in the filter , and quite a bit in the sides of the head , as not all the oil can return too the Sump .
As for the noise , could be something or nothing , you have two choices , take engine apart and investigate , or run it !!

Will the oil in the gallery return to the sump once the oil pump is working? It can’t be trapped there forever, can it?

Close to forever , no way back for it , see pic , and it’s both sides of the head !
That’s why you need a good cam cover seal 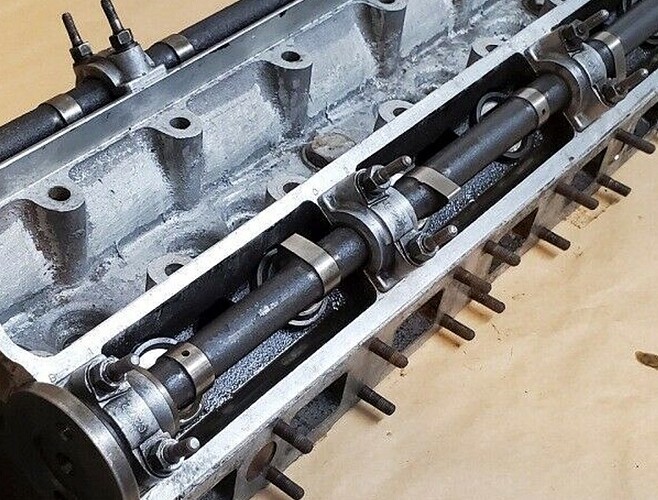 Oil return is right up here , with cam covers on bet there is a good pint , if not more just sitting there ! 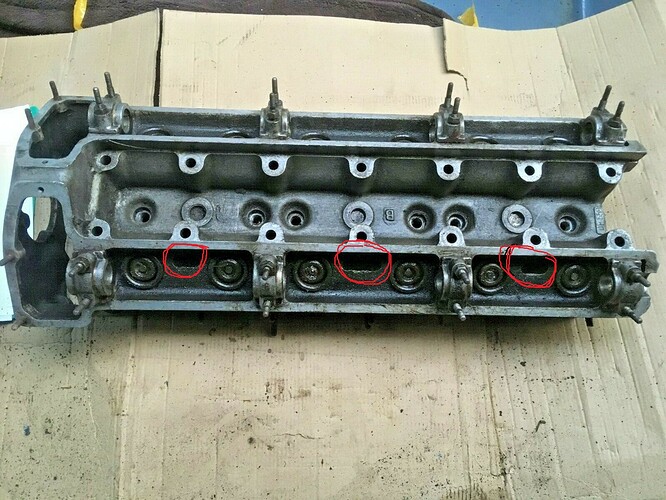 I didn’t read your response closely enough. I know oil will sit in the heads, and that is a good thing. I assume what I pumped into the gallery through the plugs on the right side of the block will somehow make its way to the sump, but it is taking a while to get there.

Timing chain noises wouldn’t be repeated each revolution.
Can You take the sump off?

Attach a video. That will get the sound.

Yes they would. The lower chain turns with the sprocket in the camshaft and the intermediate gear halves the speed for the upper.
I’d take off anything that turns with the engine (belts, distributor, water pump, maybe even the main pulley…)… still there?

The site won’t let me upload a video either. There is nothing external attached at this point except the distributor which turns freely. The sound is coming from inside the engine. I can feel a slight vibration if I put my hand on the sump when turning the crank.

The fact that the sound disappears for part of each revolution mystifies me. The crank turns both the chain and the distributor/oil pump drive, but I believe each of those turns once every two turns of the crank. So if the chain or the distributor drive were the source, it doesn’t seem like they would be synced to a single turn of the crank. Very strange.

Take a you tube video and post the link. That should do the trick. Paul.

Also, on other models the dipsticks, if a little bent, foul and deflect on the baffle and read incorrectly. Same for your car Bob?

I wonder if the crank webs are fouling on part of the baffles in the sump?

It’s not the engine damper rubbing on something is it?

Also, on other models the dipsticks, if a little bent, foul and deflect on the baffle and read incorrectly. Same for your car Bob?

I wonder if the crank webs are fouling on part of the baffles in the sump?

Since the dipstick appears to misread the oil level I was wondering if the dipstick is deflected as Paul mentioned and contacting the crank. Easy to check. Pull the dipstick and rotate the crnkshaft.

Wrong, read my previous post, the lower chain and the driving gear of the oil pump run at full speed. If you can feel it and have everything on the outside removed I wouldn’t run it.

I had no idea it had that capacity.

Here’s a previous thread on it.

I wonder if you have the same problem I once saw. A club member kept topping up the oil level because it continually showed a severe consumption and yes the exhaust was oily. Now his problem was too much oil, not the other way round. Why? Because there are different dip sticks for different engines and one is longer than the other. Once that had been changed to the longer one, his engine showed plenty of oil and the problem was solved.