Having fun bleeding the rear brakes on my S1....NOT!

Upon arrival of my XKE (see "Sweetheart…in recently posted topics), the rear Master cylinder was noted to be leaking from a bad seal. arggghgh! As the experts know, the rear brake bleeders are very difficult to access and I would like any tips or pearls of wisdom to help me finish off this job. The fronts are so easy I figured the rear bleeders from hell were payback! Thanks Steve

Did you already repair your master? I’m assuming you have a 3.8.

If you want luxury, invest in a set of remote bleeder lines. Every company has their own version for sale. I have the Rob Beere ones purchased from Team CJ. While installing them with the IRS installed is no great joy, it is doable, and isn’t much harder than bleeding, and from then on, bleeding the rears will be even easier than bleeding the fronts since you don’t even have to remove a wheel.

In either case, you’d do well to buy a scrap wrench of the correct size off ebay or something and put it in a vice and heat it, and then twist it 90 degrees to increase the throw as you won’t have a lot of room to swing it.

If there is significant air in the line it can be difficult to pump fluid through, due to the length, so the winning move is to rig up a pressure system. I bought a purpose made Motive kit. The one with the European cap will work. Other people make their own out of a spare cap and a compressor. Other people make them out of an inner tube and bike pump. Just don’t let the reservoir run dry or you’ll be repeating the work.

Pull off the foreword rear shocks/springs. Pretty easy to do and you can then get good access to the bleeders.

I wasn’t planning to buy the remote bleeders but I may change my mind. I know that when you remove shocks and springs, they’re under a lot of tension and you must be careful. Since I’ve never done that job, perhaps you could give me some guidance or refer me to a source to give me the details of the removal. I have both the motive pressure bleeder and a surgical style vacuum that has always been successful except on ABS brakes. My wife is ecstatic that I’ve never had to use her to pump while I bled the brakes. Thanks for helping me Steve

Sorry Erica, I meant to say that I bought a new rear master cylinder from Barratt as I have had previous trouble with master cylinders resealed and rebuilt. Thanks Steve

The rear shocks are coil overs and once they’re at their full extension, they’re basically inert. They’re as sprung as they’re going to get unless you remove the keepers which isn’t necessary.

So you simply jack the car, remove the wheel, jack the lower control arm just a hair to take the weight off, loosen the top nut and remove the bolt, then loosen the bottom nut and tap back the pinion shaft. You can hold a sledge against the rear shock so it doesn’t move back along with the pinion.

There is only one snafu, and that is some shocks are the wrong length so it complicates reassembly. My car came original orange Konis and they were slightly too short.

Erica, (as usual) is spot on…Just last week I did the exact same job. I was lucky, still had the original Dunlop 5/8" master cylinders and the rebuild kits i ordered actually fit. In the past, I simply sent them off to Apple or White Post for a rebuild. Be careful about any “new” cylinders since in some cases the connections are different. And as far as “bleeding”, I have always had good luck with an old bike inner tube and just a “little” bit of pressure. JS

Hi Steve, I’ve had luck with bleeding at the steel line where it meets the rear flex hose, IF, there isn’t already air beyond that. Otherwise, once I’ve figured out which is the best wrench to get in there with, I’ve just barely cracked the bleeder open and put a piece of clear plastic hose over the end of the bleed screw and let it gravity bleed. It doesn’t take long. Start with the furthest caliper.

Steve, before you get overly concerned, I would first simply try bleeding them. I typically bleed the rears alone. I use a standard small Craftsman combination wrench. I do not remove any rear shocks. I simply get the car up on jack stands. Loosen the bleeder with my standard wrench. Slip a hose over the bleeder and extend it down to a jar. Then slowly pump the pedal.
The toughest part was getting the tube on the bleeder. I found a right angle tube connector that helped on that. 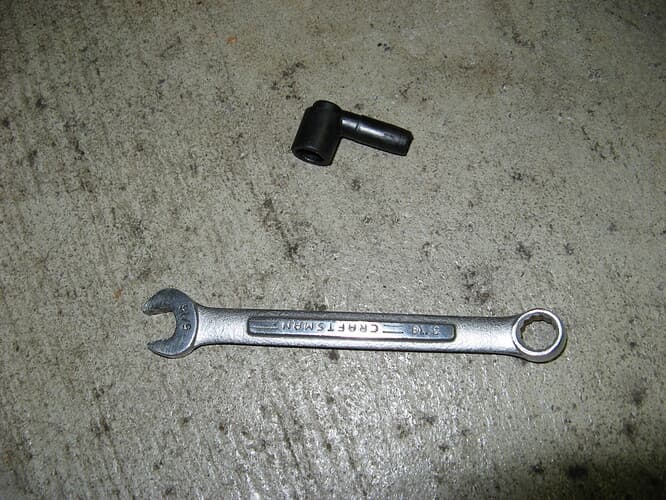 Access panels are typical only for LWB cars. And I think early S1 2+2’s are an exception even to that. For SWB cars, Tom is correct. Don’t overthink it. Just go do it.

I do the same as Tom only I use one of these cheap one-man bleeder bottles with the magnet to hang it higher than the bleed fitting. Many of the large chain stores have them on the shelf. Once I had to replace a bleed fitting and had to remove the forward shock/spring to get good access. I had trouble getting the shock/spring back in place until someone here told me to place a bottle jack between the hub housing and body to slightly spread things back to get the shock to slide back on the bottom pin with the top bolt in place. 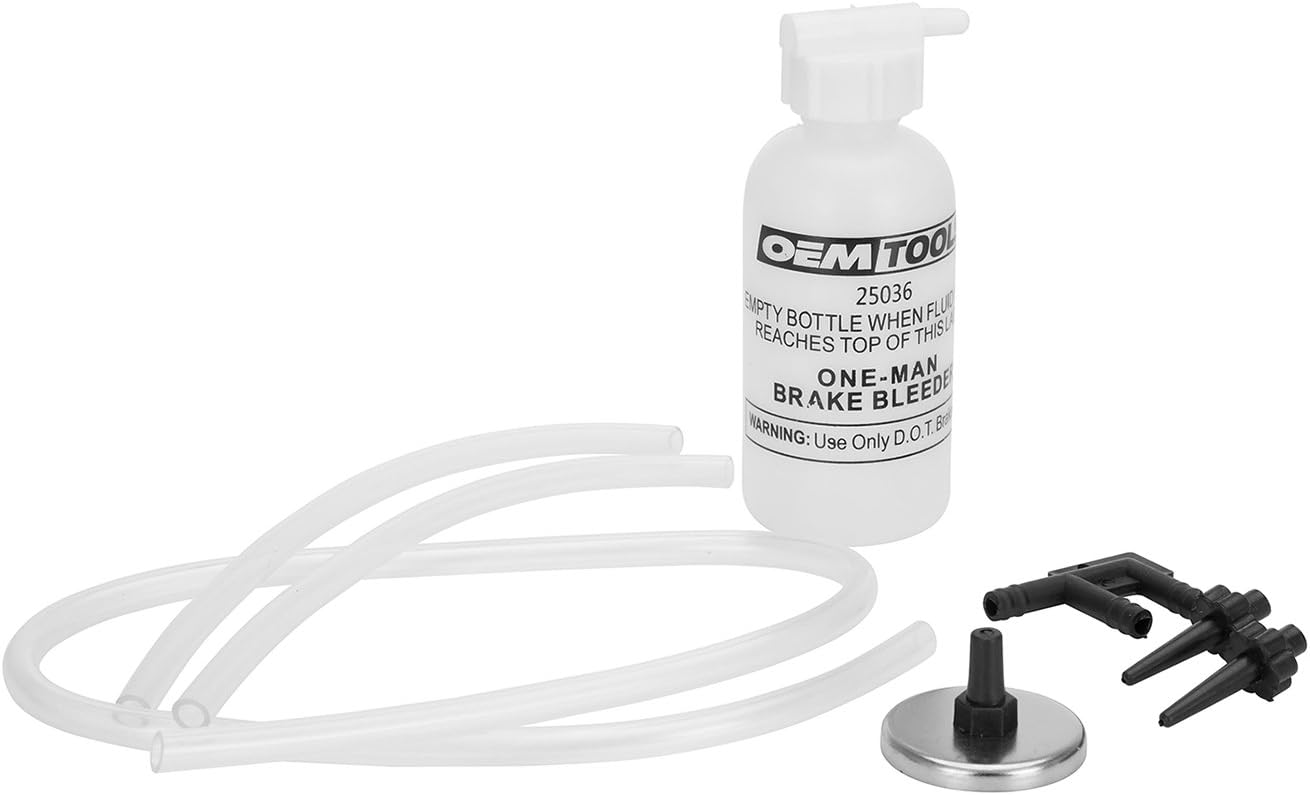 Product Description Bleeding your brakes doesn’t need to be a two person job. The OEMTOOLS 25036 Bleed-O-Matic One-Man Brake Bleeder Kit is here to turn your brake bleeds into a one-man job that’s budget friendly and...

There are quite a few swb cars and other models with access panels that previous owners have cut themselves. …so worth checking…it takes minutes and could make working on brakes much simpler…Steve

Steve - I was in the same boat late this fall… after several contorted tries, I bit the bullet and dropped the IRS - installed remote bleeds (Rob Beere). Never looked back…

I vote for Jeff just pull the shock it’s 2 bolts, one at the top and one at the bottom . As was mentioned it can be done with just a combination wrench but it’s a bit of a braille job make the wrench or not or use the gravity method as per wiggles
You can use a stick to hold the pedal down by your self , a neighbourhood kid ,
or buy a bunch of equipment you still have to attach to use once or twice You can do it and don’t make the bleeders to tight it’s just a little ball bearing that seals in there
cheers jim

Thanks everyone for your ideas and input… To me, the best path forward is as clear as mud. But I must admit, I’m leaning toward the remote system from Moss Motors, which I assume is the same one that XKs unlimited had. Any rate, I will also look to see if someone cut an access panel but I should be able to see it from underneath the car, right? I bled the front brakes and the clutch slave cylinder with ease today. I used an old, but apparently still available, medical suction device called a Gomco. It works great; vastly better than Mighty Vac, the two man method and better than fooling with the Motive System, all of which I have. Thanks again for your help. Steve