Head off. What do you see?

Pulled the head off my 1990 4.0
Had zero compression on 3 - a stuck exhaust valve. Others had 170+ compression but there was much water in the oil and some oil in the water.
Looks to me like there are gasket failures at number 3 and 5, with a ton of gunk in the water ports.
I dropped the head off at the rebuilders today - I think i may use a patch for the corrosion on the block, I don’t think its too bad, but what do others see? What do you think?

Here is what I found after pulling the head. 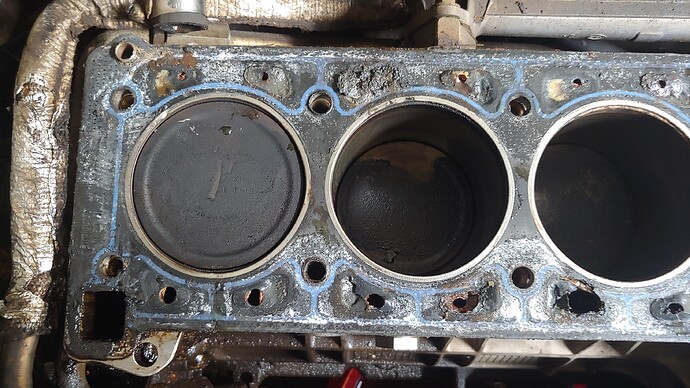 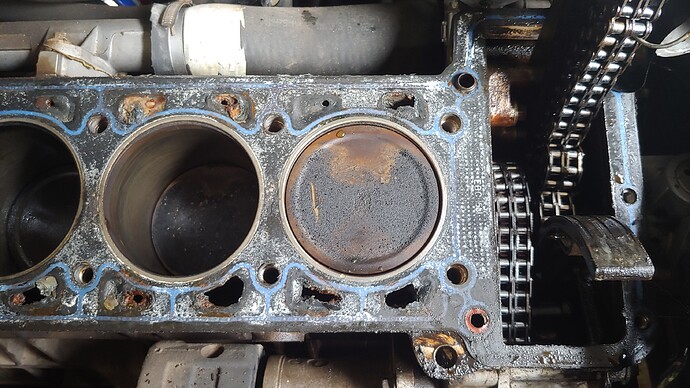 Here is the block 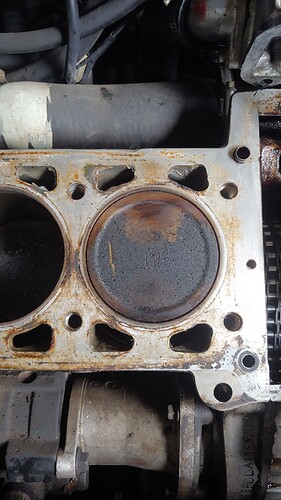 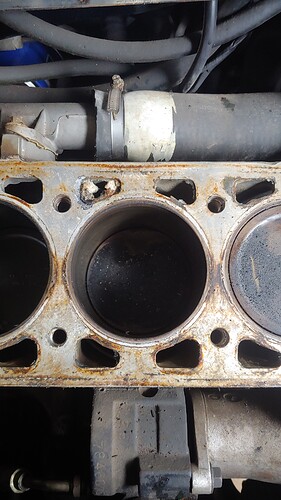 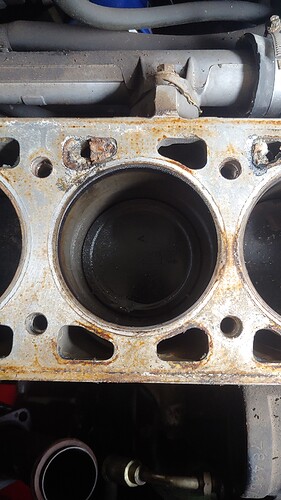 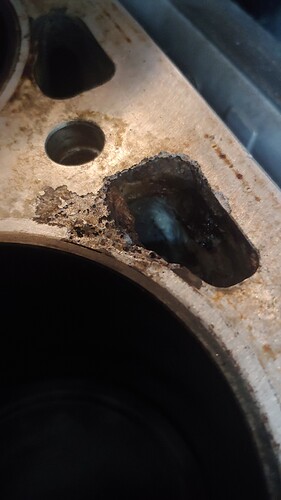 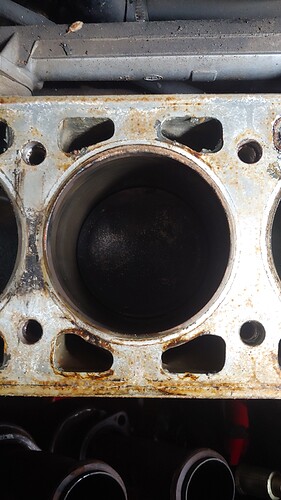 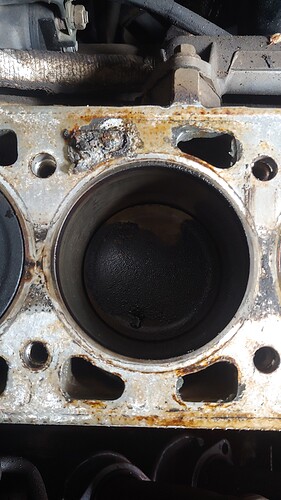 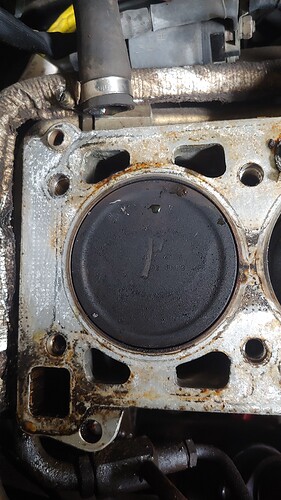 Here is the head 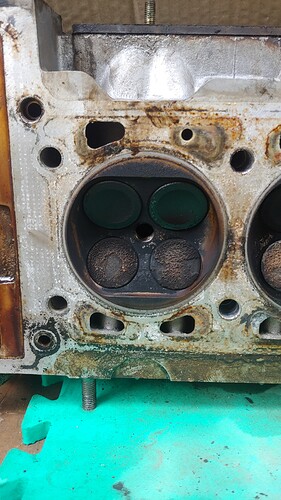 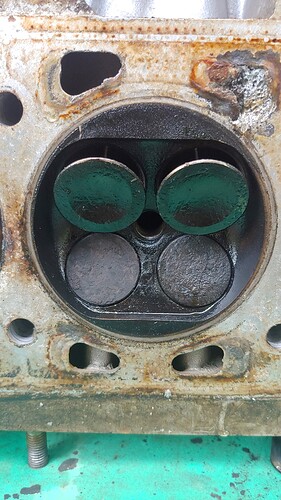 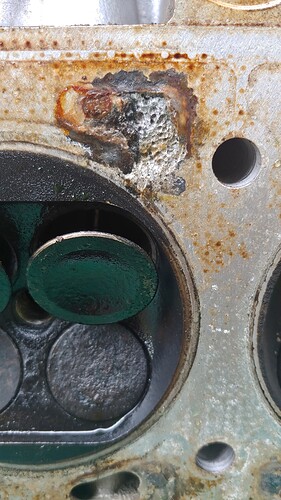 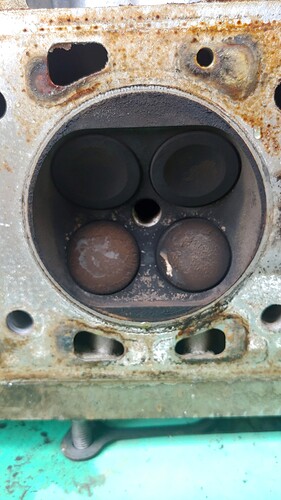 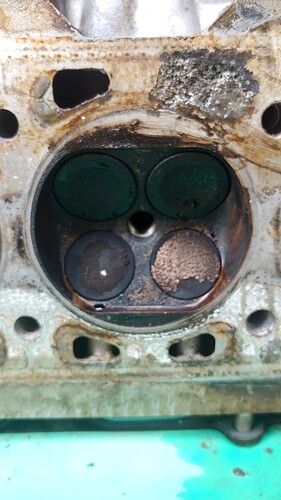 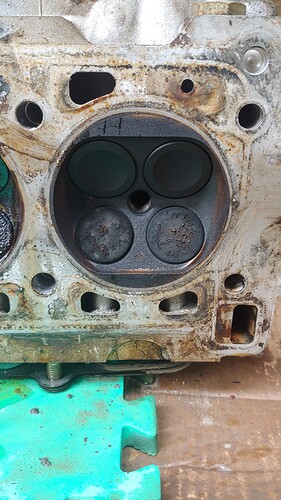 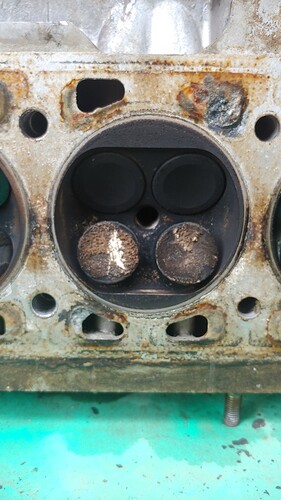 I should add that the engine has 89K miles

I will be pulling my head next month hopefully, any advice or tips?

The corrosion on both block and head in your detail pictures does not look good to me. I wonder how you can get that to seal properly, it is very close to the combustion chamber.
I am looking forward to other poeples input, especially as to how that might have occurred. I would have thought lack of anti freez, but the other water passages seem to be in pretty good condition.

Ouch ! The head and block literally looks like they were ridden hard and put away very wet.

To give you some idea of what it should look like here are a couple of pictures of my block after 150K miles. The head also had zero corrosion. So something very bad was going on inside your engine…

In the first picture you can see that the number 1 piston was steam cleaned by the water leaking into the cylinder because of the gasket failure.

In the second picture I had cleaned off all the carbon on the other pistons and used a Scotch Brite pad
to clean the top of the block.

I would suggest that you take some very detailed pictures of the corrosion and have a professional advise you if a repair is possible. You certainly can’t reassemble it like it is.

Well believe it or not one of Jaguar’s official warranty repairs to heads with some corrosion was to clean the corrosion well and fill with J B Weld, sand smooth and refit the head. I suppose the same repair could be done to the aluminum block. Factory felt there was some deficiency in the aluminum that caused this issue on some AJ6 and AJ16 cylinder heads.

The head is at the machinists now. They didn’t have time to go over it, when I dropped it off early this AM. It will need to be tanked and cleaned up first. I’m concerned about both 3 and 5 but mostly 3.
My only real option is for a epoxy repair on the block. I think I can get a suitable if not ideal surface there.
For the head, I’m hoping a skim will help and maybe hope for some option from the machine shop for anything too bad.

It’s better to buy a good used motor, hardfacing the aluminum block is unlikely to work.

A replacement used engine would present different issues and isn’t really practical or affordable.
I’m going to have to make the existing block work and hope for the best.

That damage looks to be very close to, if not involving the fire ring area of the block.
I doubt filler will survive in that area. If a replacement block isn’t a possibility then I think you need to look at having the block skimmed as well.

If a replacement block isn’t a possibility then I think you need to look at having the block skimmed as well.

I doubt that is a solution. I looks like it is about a millimetre that would need to be skimmed off.

Looking at the picture that shows the chain tensioner and the wear on the surface, that engine has more mileage than 89 k on it, the block is in poor shape, I suspect some one used water as coolant, and drove it with a faulty head gasket for quite a while

I was wondering about the chain tensioner as well. Does the wear stop at the point when the rollers make contact? 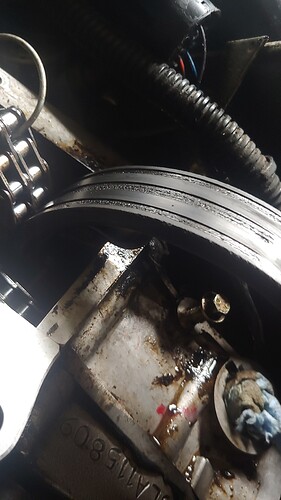 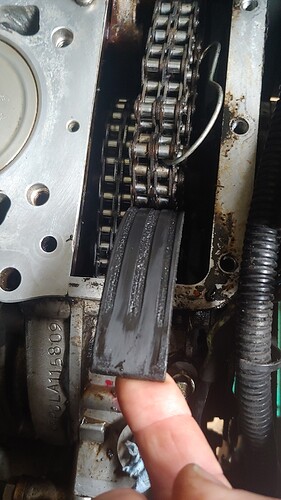 The miles on the car and engine are absolutely correct. Besides the engine, it’s really pristine. ha!

Yes, the chain tensioner wear was one of the things that kept me awake the night I pulled my head off. I started worrying about replacing it and that is one heck of a job. Called my Jag expert the next morning and he said no problem, the tensioner wears down to where the rollers contact in short order and that’s completely normal. . 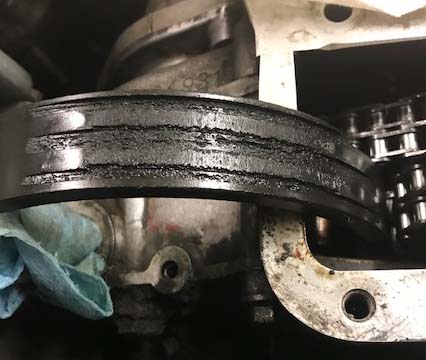 Wich engine uses those domed pistons? I have only seen those in the XK engines.

These engines are notorious for corrosion on those surfaces. The machine shop should be able to repair the head satisfactorily. The idea of using J B Weld or something similar should work fine on everything else.

I wasn’t aware of that, thanks for enlightening me

What else has changed from the 89 to the 90 engine? Is it a different compression ratio?