On a few of my vintage cars I’ve relayed the headlight circuits to get the load off the original switches that can be costly to replace, not that my E-type’s weren’t working perfectly after 61 years. I reviewed the schematic and decided to try do it all behind the gauge panel. One relay each for Main (high beam) and Dip (low beam). I used the same power source, wire from B+ on the alternator that terminates at and powers the switch. Lamp brightness was not my issue, just wanted the load off the switches. Needed to come up with a way to mount the relays, be able to freely close the panel, not stress the existing original wires at the fuse panel and make sure no shorting could occur. The power wire (red) for the relays from the hot terminal of the switch has an inline spade fuse in it, so, additional fuse in the circuit. Went with 15A, lamps are fused 17/35 British. Can go 20A, but started less, no issue on testing. Also, no new holes or mangling. Can be reversed in a few minutes. 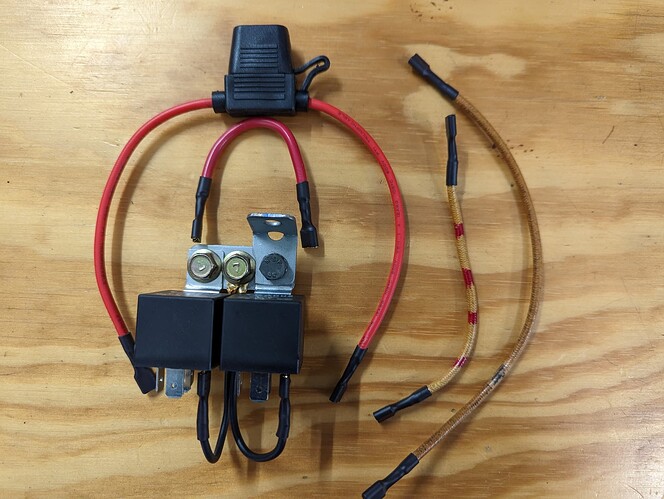 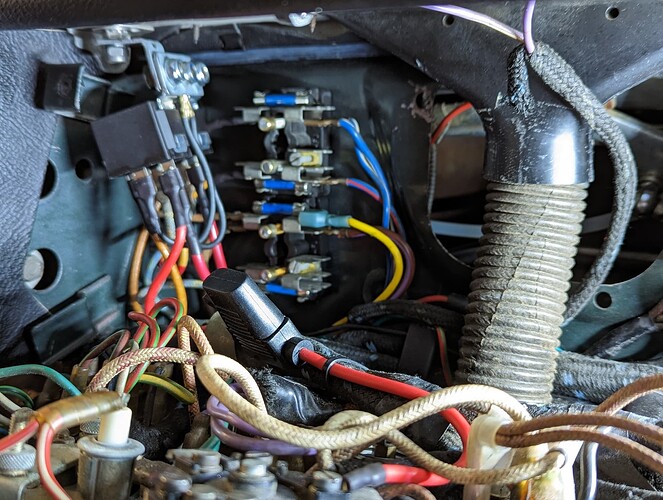 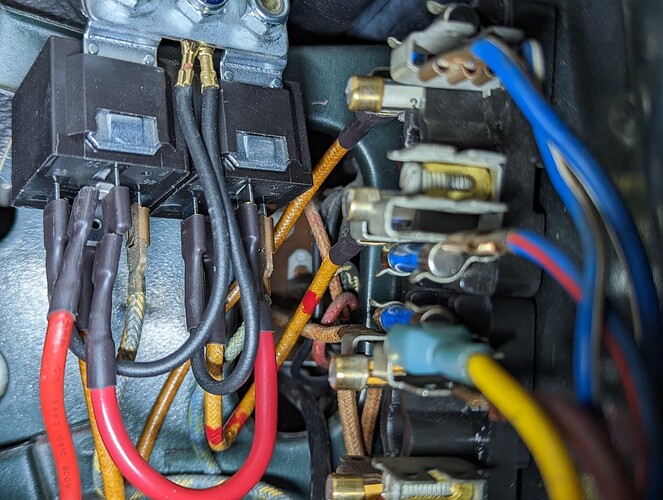 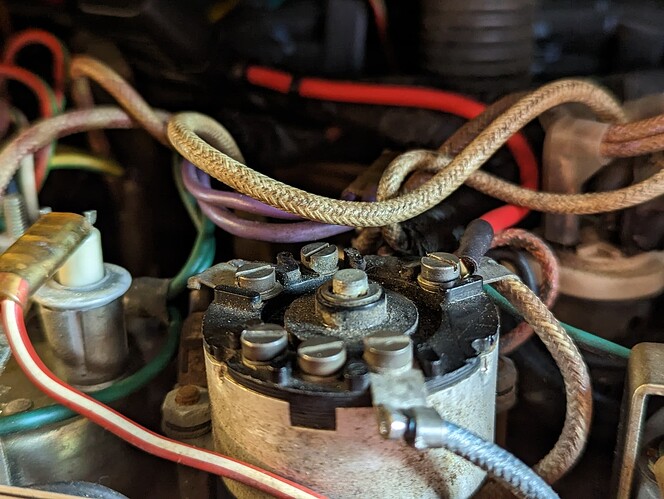 Did something similar but my objective was to improve light output. Worked superbly and I now have headlights almost as good as a modern car
https://forum.etypeuk.com/viewtopic.php?p=34430#p34430

In the eventuality that I put higher output lights into Margaret – not a high priority at the moment – I will do the same.

If you noticed an improvement in lighting, it’s only because the switch, socket or wire connectors were dirty or oxidized. There’s just not enough cable involved to have a visible impact on lighting. The only way to get headlights “as good as a modern car” is to remove the lenses (if S1) and push the lights four or five inches forward, so that the bonnet doesn’t occlude the pattern. More or less what Jaguar did, but pushing them further forward would be even better.

Saving the switch is another concern. Most Lucas switchgear is rebuildable, but it can be persnickety work. Lose a spring and you will need to replace a costly switch. So protecting the switch is a more sensible reason for the mod. I probably have more than the average amount of experimental stuff going on, so I fastened a sheet of bakelite between the left & right fuse banks to provide a mounting field for gadgets.

Sure it works fine but it will be a PIA to replace a fuse if it blow’s.

Looks nice, did you make the bracket or do the relays you chose come with it? You should order another for the other stud to power your ignition switch. I still have to do this job. I was planning to mount everything in the bonnet on the horn bracket.

I am thinking I might put my headlights on a relay, but I rarely drive at night.
For me the best electrical project was to put the cooling fans on a relay. Less load through the 50 year old ignition switch means less heat generated!

For me the best electrical project was to put the cooling fans on a relay.

Didn’t they come that way from the factory?

Saving the switch is another concern.

That’s what I was after, can’t say I noticed any improvement in the lights which are and were quite good.

Sure it works fine but it will be a PIA to replace a fuse if it blow’s.

Not sure why, have the same access as before and the inline is right up front in the covered holder. Pic 2

did you make the bracket or do the relays you chose come with it? You should order another for the other stud to power your ignition switch.

Bracket was just cut, bent and assembled from bar stock I had with holes in it, like what supports a radio in back. The relays are just from a generic box of 10 with the mounting tab to slide in as an option. I’ll look into doing the ignition switch now that you mention it.

but I rarely drive at night.

Makes two of us, but it was fun to do and really has no downside.

My 1969 fan relay got its fan power through the ignition switch so I took a wire from battery, fused it and put it through a relay to the fan.
No more hot ignition switch
Dennis 69 OTS

Didn’t they come that way from the factory?

Later cars, yes. But on Series 1 4.2 nope, all the power ran right through the otter switch to the fan, no relay and no power once ignition was off. I added a relay for the fan as well as just like posted here, a double relay for the H4 headlamps already back in 1998/99.

This will work much better if the relays are between the alternator and headlights. This lets you omit 30 feet of old wiring and almost all of the 50 year old bullet connectors. The original blue/white and blue/red wiring now has to power the relay windings and the main power can be taken from your fused supply connected to the large brown spade on the alternator output.

I have mine set up with the relays hanging from the corner of the picture frame.

I support that challenge and can produce before/after photos to confirm it!

Another old wives tale is saying the S1 headlamp covers ruin the light output - they do not. As Marek says the poor headlights are down to voltage drop which dramatically reduces bulb lumen output.

This is what the re-worked lights look like on the road, before followed by after (count the 9 metre white lines and 3m gaps as a quick reference of performance):
Dip before: I actually read that article, which clearly states:

It is quite common for factory headlamp circuits to produce this kind of voltage drop, especially once they’re no longer brand new and the connections have accumulated some corrosion and dirt.

The length of cable isn’t 30 feet, the wire gauge isn’t inadequate. What I see in Heuer’s photo is a change of focus, not a change in brightness, so there’s more to that story. System voltage varies by 2 volts or more due to the marginal charging systems in these cars, improving the alternator is a much better approach.

Installing relays to brighten headlights isn’t productive. And most of these mods are doomed to cause confusion and frustration to the guy who has to pick up on the repair.

From the Daniel Stern paper:
"Headlamp bulb light output is severely compromised with decreased voltage. The drop in light output is not linear, it is exponential with the power. For example, let’s consider a 9006 low beam bulb rated 1000 lumens at 12.8 Volts and plug in different voltages: I ran an additional heavy duty earth wire (seen on right) and measured the resistance back to the battery negative at 0.4ohms, exactly the same as from the alternator casing to the battery. I wired the +ve with a 25Amp cable to the centre pin on the multi-plug, through the individual 15Amp fuses to the 30Amp relays. The blue/red and blue/white to the individual main/dips is 17Amp.

There was no change in focus as the bulbs and alignment were not altered.

I did effectively what the previous poster did. I put the relays in the bonnet and ran a large power wire from the back of the alternator. Voltage drop is now minimal and my lights are noticeably brighter. Relays behind the dash really won’t improve the voltage at the bulbs.

I do remember driving my MGB’s and Triumphs when they were fairly new and I never found the headlights to be lacking. In fact, I found them to work just like every other car at the time. Compared to today’s cars, they simply aren’t as good. So I’m not so sure relays are the best answer. I think new LED headlights are probably the better answer. More lumens, less current draw and no need to modify the wiring.

I’ve never been a fan of adding inline fuses that will be forgotten about and cursed by future owners.

Thank you, David: I was going to cite that very part of Daniel Stern’s paper. It’s a critical piece of information that was left out of an earlier post.

The LEDs in my car are much better than the stock sealed beams and, as you state, draw much less current.