Help I am dreaming about 1985 Aus XJ6 series 3 injectors not firing! 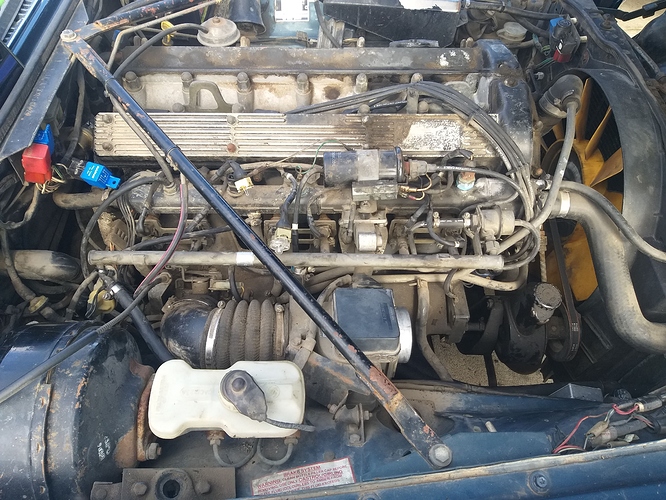 Hello, Jag forums members,
I come to you with a familiar problem a 1985 Australian delivered series 3 that will not start! I’m a long time Jaguar fan. grew up watching “the big steal” as a favorite movie and my family are mechanics and have had many Jags/Daimler on and off over the years the one that remained in the family is Nans tidy from new daily driver xj6 series 2 that has factory series 3 quirks. But the one I call on your wealth of knowledge today is a recent acquisition 1985 xj6 series 3 that has fuel injection that is not playing nicely So ill lay it out as clearly as I can.

So the facts in no particular order

The car was a runner 10+ years ago supposedly got hot and was parked. We purchased it 2 months ago it’s in amazing condition for the age, and was garaged the whole time.

20 . Have swapped out with another ECU that we were told is working from a repair shop.

Does the Ecu signal wire go all the way to 0v when its pulsing or does it float down in volts? as its my understanding the amp is designed to send an earth down that signal as a pulse

Has anyone tested the earths on an ECU if so how? (power on injectors both sides indicate power to the ecu?)

Earthing the pins on the ECU end to fire the injectors manually?

Thankyou and if anyone can offer advice it would be great.

Please help me get this solved I have read so many forums on this subject that I actually have dreamed of Jaguars not starting.

Thank you for the excellent write up, I had such dreams before… good testing, you have fuel and spark but no injector pulse.
My first test is easy and it tests the whole system: if you make and brake the signal wire at the coil or the bullet connector at the water rail, the injectors should pulse with the ignition on, engine off of course.
If they don’t pulse every third time and it runs on ether (spark), revisit the actual fuel pressure in the rail and ecu power. Not much more I have to add.

I only have one idea.

Was the car in storage for a time? If so the injector nozzles are gummed closed. Click but no squirt…

Very thorough :). Lot’s of info that requires mulling over but one thing caught my eye…

The 3 earths wires have been cleaned up and are back to metal. (the main one on back of block near firewall)

I think you’re talking about the bundle of earth wires at the rear of the water rail.

Are you sure you don’t have a couple of stray earth wires broken off and dangling, perhaps a bit hidden? 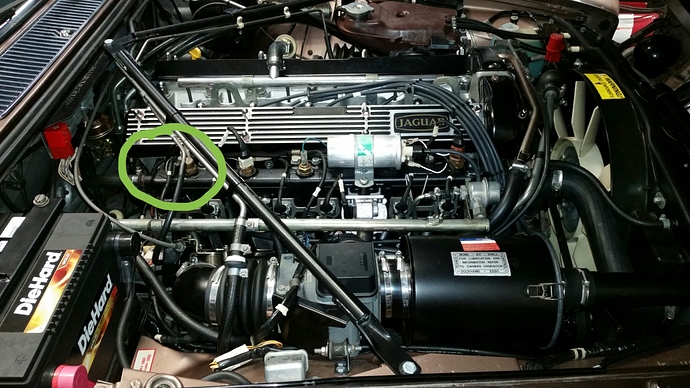 I am really leaning to bad earth and power to the ecu unit.

You mentioned the fuel pressure is there a minimum pressure the injectors will fire?

the fuel pump was definitely gone from sitting for so long.

I’m leaning to the earth is no good also, that bundle is the one I am referring to. When I say three the car had three looped eyes with multiple wires out of them onto the back of the block.

It’s my understanding this is also the earth for the ecu.

We are going to put the car on a hoist today and see if we can find anything suspicious and look to clean any earth connections we find.

I have read if the power on the ecu is there but it’s a bit flakey due to bad power or bad earth that the ecu does not have enough grunt to fire the injectors.

We are going to check all these again today. We had cleaned up alot of wires so maybe we left the critical one off.

Mark,
Normal XJ6 fuel rail pressure, as measured at the Cold Start Injector hose for convenience, is about 36 PSI as regulated by the fuel pressure regulator. I don’t believe the fuel injectors have any idea what the fuel pressure is and when they open and close on command from the EFI ECU. I have seen fuel pressure rise to about 40 PSI under certain conditions including when charging the fuel rail with the engine not running.

You might have an electrical problem if Carl is wrong and the injectors are not gummed up - which would be possible. If the clicking does not work, try a short tap of 12 or better, 9v to the injector: they‘ll click regardless off fuel pressure.
The ground points are important, I recall two eyes at the back of the water rail. Try a pulse first. Thanks for testing. No noid might mean no pulse, but the ECU is regarded as bulletproof.

Thankyou for all who commented this morning… I am very happy to report the car is now running! After many different fault tests we finally come to the conclusion that All the injectors had ceased up solid and would not fire even when 12v was applied directly to them and that also the lucas amplifier attached to the engine block after tripple checking all the wires to both the coil and the distributor. Was seemingly working intermittently. Replacing both the stuck injectors and the amplifier from a donar car luckily purchased last week in a desperate attempt to get this car running. Resulted in this car runninng again and me being able to sleep tonight. I mentioned the noid light not flashing during tests but after we got the car running testing the noid light a second time on the injector wiring showed a flash as expected. We think the intital non noid light was the amplifier not working at that POINT. although we had tested the second amplifier that eventually worked also with no noid light action, so we think it may have been a combination of things we solved, maybe one like cleaning earth’s and wires we were not aware the impact of. We run the car on the original amplifier but it failed after a short time. And we reverted back to the donar one…and she fired right back up, I’ll post a YouTube video I have made that summarises parts around the engine linked to this problem, jag experts feel free to contact or correct me and I’ll make another vid later if I have got something wrong. But hopefully it helps someone one day who is pulling their hair out trying to make a series 3 jag run. Those who said it’s not the ECU were spot on we tested 2 other ECU once the car was running and all 3 worked and ran the car fine, I hear the word bulletproof thrown about with these and I’m inclined to agree. I may comment also a bit of a summary of things to check or edit my original post to help others in future. But in summary she runs and we could not be happier. YouTube video here, don’t mind my voice lol. 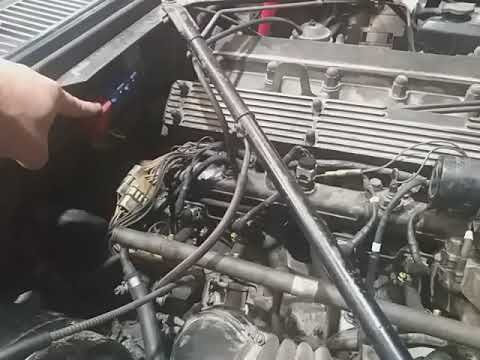 Carl was right the injectors were gummed solid.

Turns out it was a combination of both no pulse and stuck injectors that was the issue. She is running now.

It was exactly this, along with a faulty on and off amplifier!

Turns out hearing an injector click is in no way an indication of fuel exiting the injectors.

Mark, well done on the investigation and final success, just a suggestion, it is ok to reply to any and all posters in the one posting, to save saying the same thing too many times

We run the car on the original amplifier but it failed after a short time. And we reverted back to the donar one…and she fired right back up,

**
It’s always a bit awkward not knowing what fixed it - for future references, Mark…

Certainly, if the injectors were gummed up to the extent they did not even ‘click’ with 12V applied (very briefly!!); there would be no petrol delivered - no run. However, this would not interfere with the injector ‘noid’ signal - noid would pulse during cranking irrespective of blocked injectors…

So you could indeed have had an independent ign amp fault, possibly intermittent in addition - as demonstrated by the later testing. Or indeed some bad connections - cleaned up. 10 years standing takes its toll - use it or lose it.

Moral (for future reference): No injector noid - amplifier/pick-up/connections. Noid signal, but no injector action - injectors themselves. injector action, but no start - fuel pressure.

As a PS. Using ether or start gas is fraught; weak ignition may still fire the easily ignited ether - and may cause an almighty bang if it backfires in the air duct…

That said; you went way above and beyond duty - and well deserve success!

Thankyou for all who commented this morning… I am very happy to report the car is now running!

Definition: Euphoria - ‘yoo for eee ahh’
Noun; From Anglo Saxon Coventry region - “Thank you for all who commented this morning… I am very happy to report the car is now running!”

Or they can not pulse if they are stuck???

Good luck on it.