I have a Series 2 XJ6 4.2 litre engine from a former kit car on my bench at the moment, which starts OK but has high idle revs (about 3,500 RPM) that I don’t seem able to lower to a suitable tick over speed. The engine has twin HIF7 carbs and a manual choke converted AED (both now fully stripped and reconditioned). I’ve connected up a new electric fuel pump (which was recommended to me for this engine from a well known Jaguar parts supplier in the UK) but all the usual XJ6 engine “management” aspects stripped off and /or blanked off - only the vaccum advance to the distributor remains from the first carb. New air filter fitted and carbs seem to be balanced with each other on my vacuum guage.

The timing appears set-up and correct, as does the AED and Carbs to the SU instructions. The engine fires up ok on manual choke (up to about 4,000 RPM), and soon warms up to enable push in of the choke cable - but the revs don’t drop below 3,500 RPM. Usual carb linkages are disconnected and idle screws set back.

Lifting the carb barrels does make the engine fall and stutter, but then regains to the high revs. I’ve yet to try cutting off the AED fuel line (fuel tap on order due next week!!) and I can’t see an obvious leak (fuel or air) anywhere.

Could the over revs be due to wrong fuel pump (and I’m now using E10 unlead petrol, standard in the UK), AED, carbs not set up correctly, too much air intake (ie: a leak), or some other issue if the XK engine does not have the usual sensors, pipework, etc connected?

What fuel pump is this? You don’t need a lot of pressure with carbs, but you do with fuel injection. Maybe the supplier read the wrong page on his computer and thought you had a fuelie? Or never heard of a carb.
I can’t imagine how you would get 3500 rpm unless either your throttle plates are wide open or you have a huge air leak from open smog pump ports or something.

Rob’s point about pump pressure - only need 3 - 4 lbs - over this will push past the float needle valve and have fuel running out of the jet bridge into the inlet manifold. If this isn’t happening at ignition “On” - fuel pump running - I would give this a “pass” for the moment.

It’s getting air from somewhere else - misaligned throttle plates won’t get you to +3000rpm. I suspect the air valve in the AED is contributing. Blank the air intake off (big pipe connection underneath). Send us a photo so we can check it is an AED not an ASC. Sometimes terms used interchangeably.

Pinch the fuel hose to the AED with soft jaws and Vise Grips.

Let it warm a little so that it might start with the AED isolated per above. Paul.

Definately is the AED with manual conversion. Fuel pump (as recommended by UK supplier) is an SU AZX1308, which looking at the SU Web site is a High Pressure pump, 18 gallons per hour at 3.8psi. I think the AUF222 or similar is a Low Pressure pump, but can anyone recommend an external pump for the Series 2 with HIF7 carbs and AED?

There is no flooding of the carb or AED float outlets, but I do notice a little residue of fuel in the both carb Chambers - maybe suggesting pump pressure to blame. If it was in just one chamber I’d be more suspecting one of the internals of the carb to look at.

The carb butterfly plates seem to seat and close correctly, and new needles, seals, floats, etc fitted in them and the AED.

Blocking the AED air intake does not seem to alter the high revs (once the engine has warmed up and the manual choke pushed in).

Clamping the AED fuel feed once the choke is pushed in again seems to have no effect, so I’m thinking it must be on the carb side.

I might spray some Cold Start around the manifold to see if there is a hidden air leak somewhere (which I suspect will change the revs if there is), but my thought after the initial feedback and suggestions is it could be the pump - so any further information much appreciated. 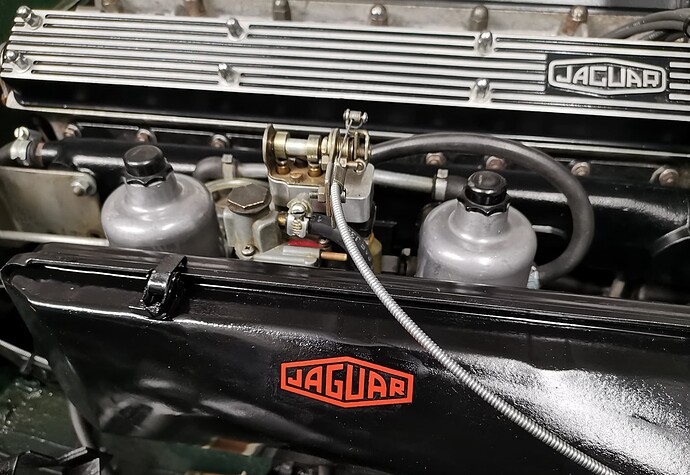 I found gasket damage in the AED, so air leak issue. At last my replacement order of spare parts has arrived!!! 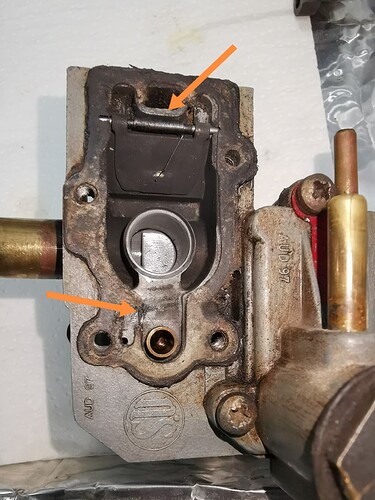 With the manual choke conversion, where is the fuel needle level set? Information I have for the factory auto AED says turn the brass needle flange down clockwise until it just raises the needle off the square headed seat, then 3/4 turn back anticlockwise. This sets the fuel shoulder 8.5mm from the bakalite housing (which seems to agree with a tuning diagram I have from SU). This would mean when the fuel needle is fully depressed some fuel will still enter the chamber.

However, the manual conversion information from Limora seems to be saying take the brass flat head screw of the fuel needle down clockwise to close fully the fuel needle “full dead centre” - no mention of going anticlockwise by 3/4 turn. This will totally cut off the fuel when the manual choke cams press the fuel and air pistons down (choke off).

I’ve set it to the normal auto AED adjustment, and the engine revs still high, unless I cut the fuel to the AED, but no were near the very fast revs before the gaskets changed - so it must now be the sensitive AED adjustment needed. Anyone with any tips on the correct starting position for the fuel needle in the manual AED set up would be greatly appreciated.