Yesterday wife and I went out for hamburgers and ice cream. Twenty miles of exercise for the Jag .Cruising along at 60mph, I noticed a sound I had not heard before- a resonant drumming that could be heard, but not really felt. My wife, even with her bionic hearing could not hear the noise. 58mph, quiet. 63mph, quiet again.
Applying the rule of “Most of your problems are caused by something you have just worked upon” when we came back home I put the car up in the air to take a look underneath. I replaced the pinion seal in my diff. a couple of days ago, but before I began I paint-sticked or center-punched everything important. Everything was lined up just as it was before. Yokes on drive shaft. Everything.
Woke up this morning with a plan. (This really scares wife.)
I put a dial indicator on the drive shaft, as far back as I could, and found I had 25 thou. run-out .Hmmm. I unbolted the yoke and turned it 180 degrees. Bolted it back up. Now I had fifteen thou. run-out. Interesting. This may not sound significant, but a spinning driveshaft with run out could be the cause, I thought.
Started the car (on stands) and ran it up to 60mph. Quieter than before. Then decided to add a hose clamp to the drive shaft to see what difference that would make.I positioned the heavy part of the clamp at the low spot on the drive shaft. Now I had heavy vibration at 60mph. That means I’m getting somewhere. Adding another hose clamp to the shaft, and positioning both clamps correctly (took about four adjustments) and I was able to balance my slightly vibrating drive shaft. No more noise and no vibration. Confirmed by road-test an hour ago.
I don’t know why the vibration appeared as I was certain that things went back together as they should- just glad I was able to fix it! (Now all you old-timers out there can smile) 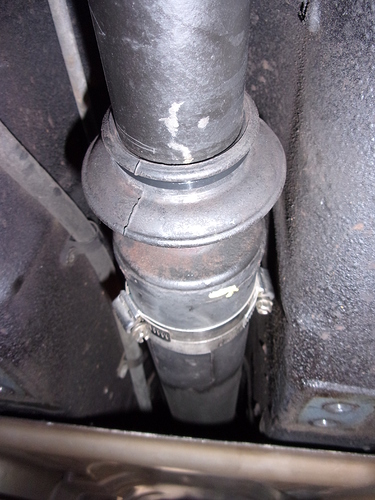 The thing that bothers me is the presumption that the drive shaft should have no runout. There are drive shafts on farm equipment that are square, meaning they have a runout of a couple of inches!

The reason I get irked is that the driveshaft on my Triumph GT6 was a source of much consternation. It was a little out of balance, so I took it to a reputable balance shop for balancing. When I got it back it was SO far out of balance that the guages on the dash were a blur. Had to pull over and beat the new balance weights off with a hammer and chisel to render the car drivable.

Went back to those goobers, and found that the process they used to balance involved removing the yoke from one end and then rolling the drive shaft around on its outer surface. IOW, they presumed the outer surface was a machined, close tolerance diameter – which it was not, on the Triumph it was a sorry welded pipe with about 1/8" of runout. I explained to these guys that they were doing it incorrectly, and they replied they had been doing it that way for 25 years. So, they’d been doing it incorrectly for 25 years. That confirms a notion I heard somewhere that there’s no such thing as more than 5 years of experience, after that you’re just repeating the same mistakes.

Went on to find every drive shaft shop I found balanced drive shafts incorrectly. My only solution was exactly what you did – a pair of hose clamps and some trial-and-error. It took quite a while to get it right, possibly because there are so many OTHER sources of vibration in a Triumph, it was difficult to tell when it was getting better and when it was getting worse. Eventually got it good enough, though.

It was circa 1951. Im et a kid at a repair shop. I had bought the roadster bocy from his Grandpa a few years before.

He and the guys at the shop had done a Caddy into Ford swap. His very nice shiny all black 49 rag top the subject. But, not quite as others were doing, Not the “new” OHV Cadillac V8, but the older tried and true flat head V8.

Drive line shops not yet in existance then. The method chosen here was two drive shafts. One ford and the other Cadillac. Hack sawed and mated. Trial and error on the shop floor ten welded. Just rolled on the floor til it ran true. Gas !!! It worked. Or so the owner declared.

Decades later, Son was installing something or another in something. Oh, swapping in a four speed for the three plus OD in the 312 powered 40 coupe!!

My memory fails me. It was an old hot rod guy that was a bit quirky. His Olds powered belly tank was in the cluttered shop The family vacation rig, a retired plumber’s Chev pickup. Now powered by a blown OLDs V!!! He made the drive pulleys !

A huge lathe at ne end. After measuring and cutting, the shaft was welded centered on the lathe. Then gently spun and the high spots reduced with a torch. when clean revved it up. Clean finish welded with stick tech. Beautiul seam.