How do you get the jack under the front?

I know that the jack goes under the picture frame but how does that work? There doesn’t seem to be enough room to get a floor jack in with the wheels on and I can’t slide it in from the front. If I do manage to get it in then it’s too far in to I can’t jack the handle. I seem to always end up jacking up the car using the frame.

Sounds like your car is sitting a little low ( or your floor jack has a high profile).
Either way, drive the front wheels on a couple of 2 x 6’s and hopefully you’ll gain enough clearance.

It doesn’t seem like clearance is as much of an issue as being able to get the jack to where it belongs and then being able to move the handle, at least from the front. From the side the wheel is in the way. Maybe it’s the jack itself but I tried a smaller floor jack with same problem.

I made a set of ramps out of 2x6s, and then at the end of about a 3 foot ramp, put another 1’ section of 2x6, thereby doubling its thickness. Even then, once you get the jack underneath there, you have to take tiny little bites of the pumps to get it to go up, but it will go up.

I just remembered: I would always mark the handle of the jack, with a little stripe of paint, where it was directly below the mouth of the bonnet. That way I knew I was putting the jack in the right position without having to get underneath the side of the car to see where it was.

Thanks, it sounds like there is a technique and it’s not just that I’m doing something wrong.

There is just enough room for me to use a harbor freight racing jack from the front, but the first 5 pumps only raise it a tiny amount until I have enough room for a full swing. Hopefully you know you have to buy or make a wood block that fits inside the recess of the picture frame or you’ll destroy it.

Another option that works well is a bottle jack. There is always room for that. They even have fancy air charged ones you can connect to your compressor in addition to manually pumping.

Same here. But not all floor jacks will work - my first one didn’t. It has to be a low enough profile and long enough for the handle to clear the nose of the bonnet and, as you say, the first few pumps are pretty shallow. 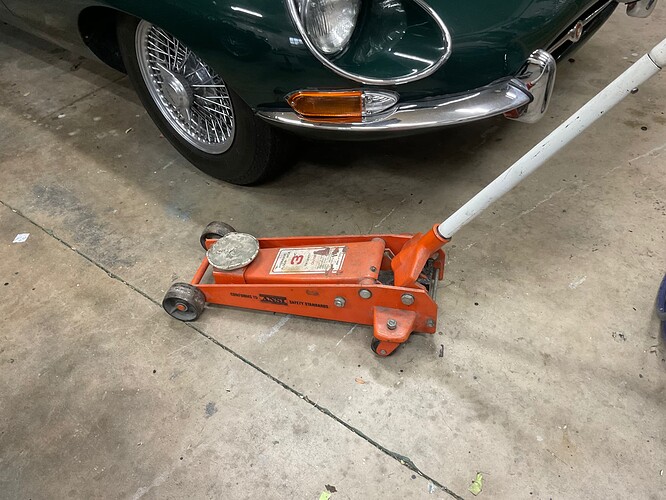 Yep, my old Sears one wouldn’t work. This is my current one, often on sale for 70 bucks or so 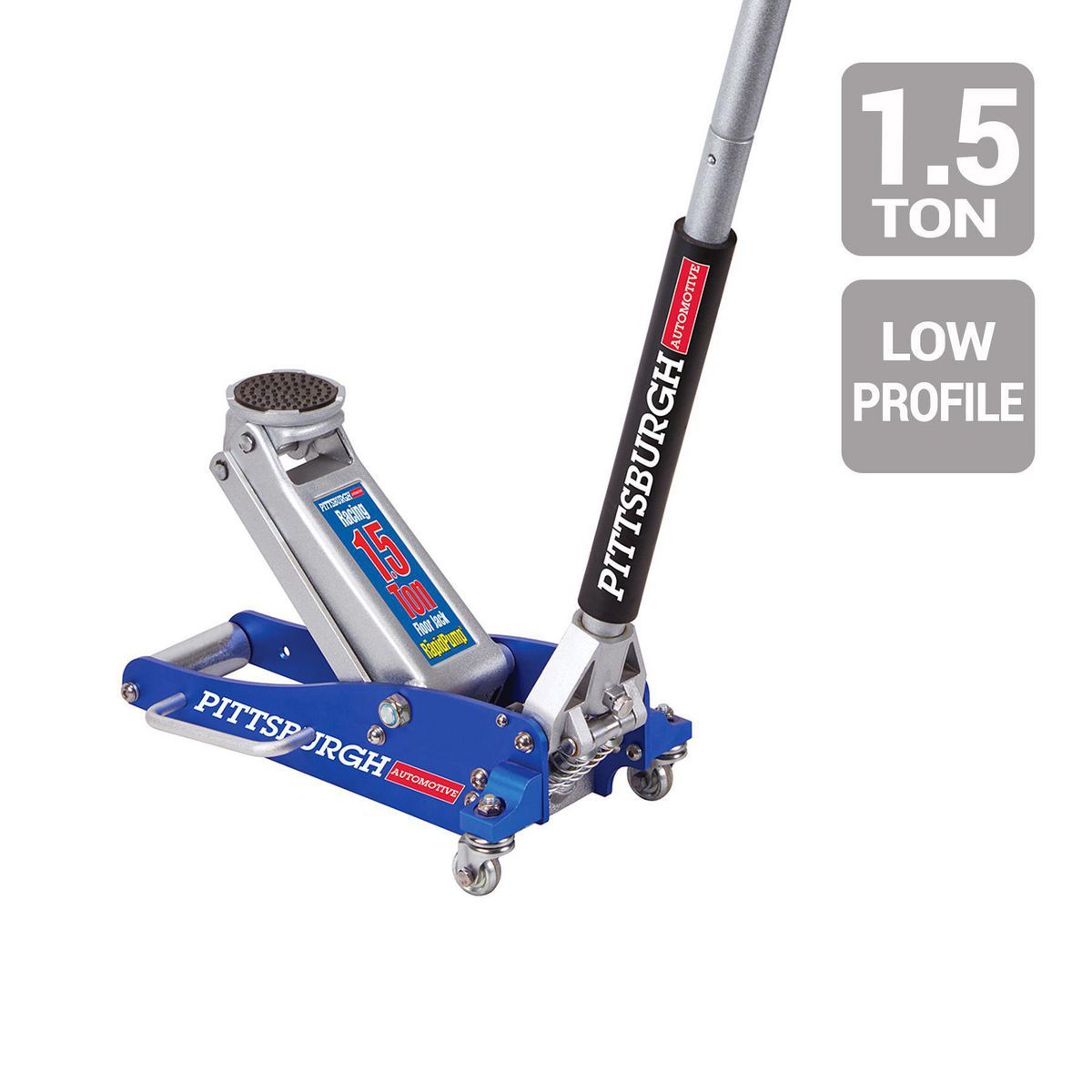 That’s the same one I use, and it’s small enough to come with me on road trips too, along with the wood blocks I use to jack the front and rear of the car.

Has yours required service yet? The front roller is really susceptible to galling of the aluminum roller if not kept lubed and clean, and if it’s even a few drops low on fluid it becomes a bear to pump up. I had to flush, fill and bleed it a couple years ago. I can’t recall ever doing that with a jack before. Otherwise it’s pretty good for the price.

I don’t believe you’re doing anything wrong or its about technique. It boils down to being able to place your jack under the picture frame. If the jack cannot reach the jacking point ( picture frame) a suggested method is what both Paul and I described : drive the car’s front wheels on 2 x 6’s. This will increase the ground clearance by 1.5” which will hopefully be enough for the jack to reach the jacking point. And, like Erica, Nick and David mentioned, at first you’ll only be able to use shorts swings until the car starts to lift after which you’ll have more clearance for longer swings. Be sure to lower the car back on the 2 x 6’s or you could have the same issue trying to remove the jack.

Has yours required service yet?

Other than freeing up the front roller, which has seized a couple of times, it’s been fine. I’ve never had to fill and bleed it.

Be sure to lower the car back on the 2 x 6’s or you could have the same issue trying to remove the jack.

In my experience, this is less of an issue, as when you lower the car off the jack the suspension doesn’t settle to the ride height until you roll the car back and forward a few times. I guess I get at least 2" additional ground clearance after lowering the car.

I’ve always found it more difficult to jack up the rear (3x4 between the tail pipes acting on the IRS Tie Plate) than the front. The clearance there is less on my cars. Still doable with this jack though.

Some people also drive onto ramps as described when servicing and jacking is not required , the bonnet can be raised raised higher. It keeps the bonnet from hitting the floor and gives better access .I also use them for oil changes on other cars

Too bad I still don’t work at a machine shop: I replaced the heavy steel roller–on mine – with a Delrin roller that decreased the weight of the jack and was a lot smoother rolling and quieter too!

Rather than strap a block of wood under the car I made a wooden block that cradles the lower side of the picture frame to help protect the frame from damage. it also allows for an additional 2-3/4" of lift out of the jack. 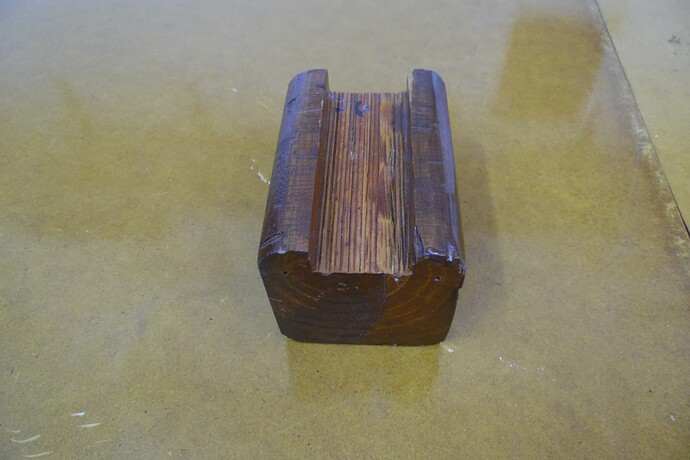 7 partial pumps, limited by the lower part of the bonnet, and the car is on its way up. 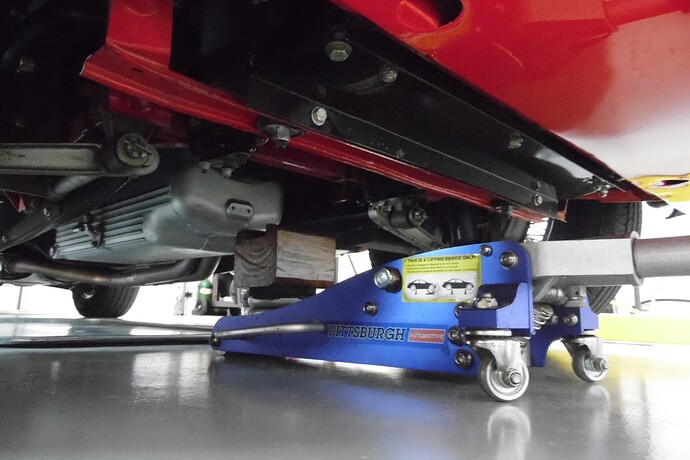 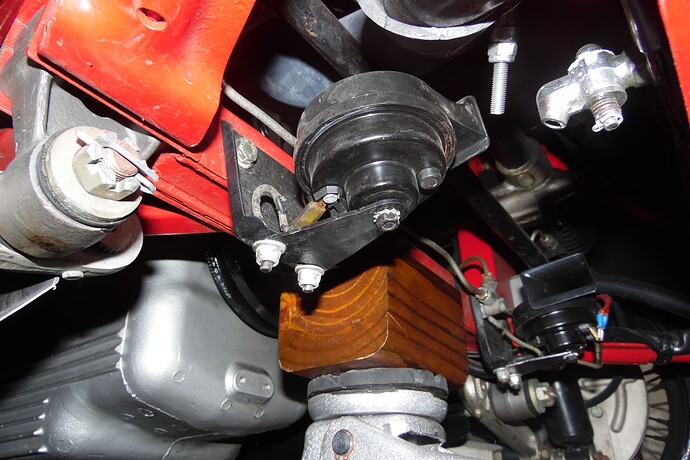 As for the jack itself, it’s worked flawlessly since the day I bought it about 8 years ago. 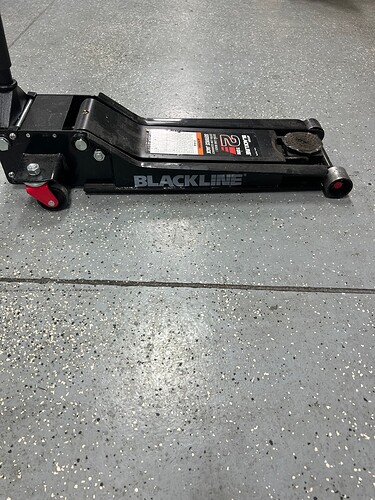 IMG_102011920×2560 647 KB
The XKE sits low in the front so it is necessary to have a low profile jack with a long enough reach to go under the picture frame and still have the handle out where it can be used to jack the car up. This jack comes from Northern Tool and has the fast jack up feature. With the rubber base area, it does not scratch the cars. I got it for some of the exotics I work on where you have to get under to jack them up. This one has a 2.75" height when down and goes up to 24". Highly Recommended. NAPA makes the same jack FYI.
6 Likes
John_Walker (69 FHC. . . $ via PayPal ) September 23, 2022, 4:56am #17

Just pointing this out from a safety standpoint.

Gosh… that horn is just filthy…

It looks like my jack is just a little too high. I have the same one as Nick but I have a rubber robber jack pad that I put on it. I’ll put the original metal pad back on and give it a try. Better yet get one of the really low jacks like others have suggested.