How I removed fuel filler necks 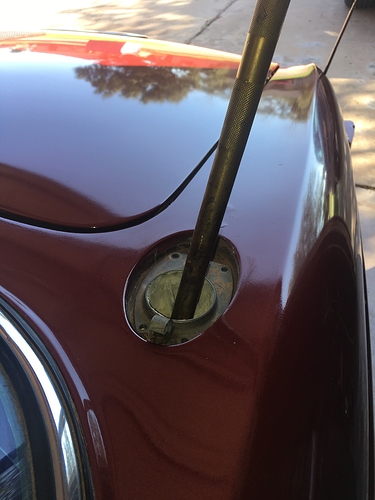 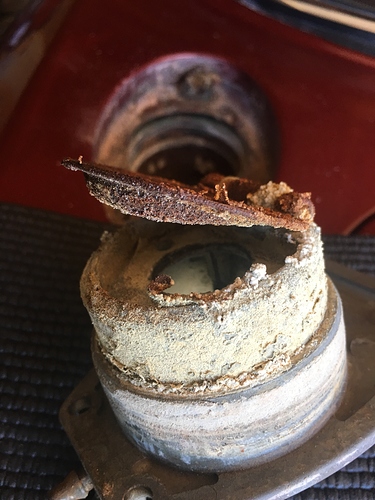 Filler neck pic3.jpg3024×4032 2.48 MB
I am sure that I did not follow the Jaguar repair procedure for removal of my filler necks, but the manual wasn’t written with the idea of working on 40 year old crusty parts. The basic issue being that parts do not want to be removed after being in place for decades. The cap itself is just a matter of punching out the roll pin that it hinges off of in normal opening and closing. Then push the small vent hose below the hinge point for the roll pin off. The filler neck is pressed into the top of the tank and has two sealing O-rings. Corrosion on the filler neck and hardening of the O-rings is what cements the filler neck to the tank, meaning that it won’t just pop out after removing the four body screws on the filler neck. I had a brass drift that was slightly smaller than the filler opening. So I worked it back and forth all around to break it loose and started bringing it upwards. Didn’t take long at all. Alternatively if you have a slide hammer with a hook that should work too. 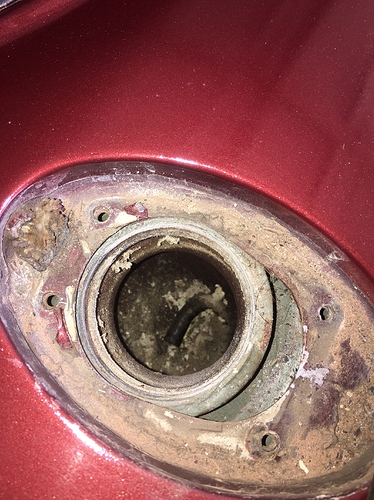 Filler neck pic4.jpg2138×2851 2.1 MB
Then you will likely be greeted by a crusty tank like this. Probably a goodly number of older XJ’s have tanks bad like this, with owners unaware that their car’s low performance is because of clogged and restricted fuel systems.
Starting my S1 XJ6 LS1 swap
MLee (Mark Lee (Pay Pal Patron)) October 14, 2017, 5:32pm #2

I’m gonna have to go down this route with my Series II. I’m down to one tank. haha, Oh, and did I say the gas guage doesn’t work either. Makes for an interesting drive.

FYI, XKS.com has the gasket (kit) / o’rings for the filler and the drain.

Thanks Mark, I’ll encourage you to take the plunge and fix your tank issue. I suspect that even on your “good” tank that it is full of sediment and has restricted fuel flow. Probably a fair number of older XJ’s here are down on power - and the owner thinks its just because the engine is old, when it could be that the engine is fine - but starved for fuel from crusty plugged up tanks. On mine the fuel hoses are also full of crud - I’m installing all new hoses and some of the tubing. Thanks for your parts source tips. Oh yeah, for those unsure of what they are looking at in the second picture in my original post: that is the fuel filler neck flipped upside down after removal so that you can see how much corrosion and rust there is on just this one part!

Thomas, thanks for the photos and “play by play” of the fuel tank issues. I started from the front of my '77, and am working my way back. The real world descriptions of work completed are much appreciated! Please understand that all of your hard work will be rewarded when you finish this endeavor, as these models are without a doubt, the most beautiful and well thought out vehicles in existence.

Thanks Eric. I enjoy sharing my field fixes, and since I bought this as a non-running project I am looking forward to seeing what it is like to actually drive! My goal is to return this to a drive anywhere at anytime car.