How much of my interior is leather?

leatherette” as we in the states know it, ie

I spent most of my adult life in the town next to Naugatuck CT. We used to see herds of Naugas free range grazing next to the UniRoyal plant along old Route 8.

How about early 4.2 coupes? I just Gliptone’d my GW Bartlett console. It seemed to me the the beak, the boot, the ski slope, the arm rest and the floor of the armrest cubby are all leather.

And a related question, will Gliptone damage the adjacent vinyl?

affect vinyl at all,

Well, that’s good since I was quite the slob treating the leather!

Not sure about the Cooper factory. There was the Pirelli headquarters in New Haven at Long Wharf.

The problem was they didn’t blend into their surroundings. 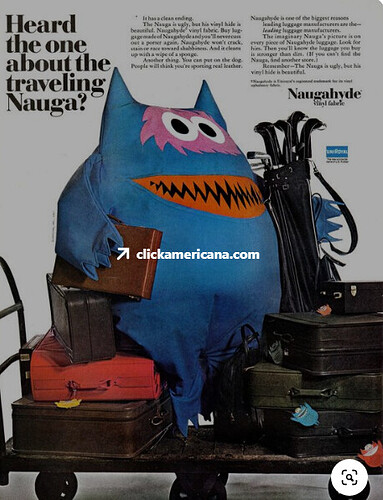 The problem was they didn’t blend into their surroundings.

My recollection is that the TV commercial said they were ‘from the jungles of Mishawaka, Indiana’.

The grab handle in my car appears to be wrapped in leather. 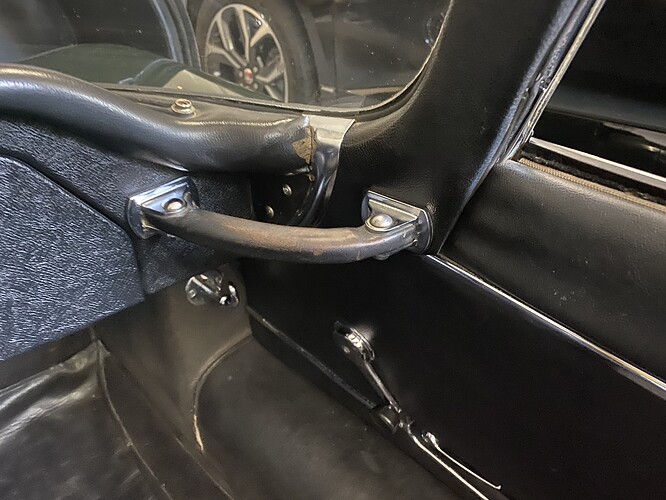 Yes it is, and it’s always black, regardless of the colour of the interior.

FWIW only the sports cars made by Jaguar had the ”grab handles” or like we call them ”horror handles”.

Some of these names for things in like whaaaa… I’m trying to get some real 100% specs for these cars when it comes to interior. Does anybody have a good web source that is gospel?

This forum is about as good as it gets internet wise. Use the Search feature and you will find several decades of discussions. Not all statements made are correct but if you read enough posts you should recognize the consensus opinion. Just put in a keyword like Leather and have fun.

Trim materials used in the E-Type

Hardura is the registered trademark of an embossed PVC coated felt with bound edges used to cover areas in vehicles prone to wear and economise on the cost of carpeting. It was manufactured by Hardura Ltd who were established in 1948 at St Lawrence Mill, Mill Street, Great Harwood, Lancashire. The material is very hard wearing with a wipe clean surface offering some limited sound insulation. Used in the luggage compartment of the FHC and OTS E-Type (always beige), under the seats, on the ‘A’ posts and on the rear shelf (OTS). Very early cars are reported to have used vinyl cloth rather than Hardura under the seats. The company was dissolved in 2010. Hardura is still produced but tends to be advertised as ‘Tuffelt’ for legal reasons.

Everflex is the registered trademark of a vinyl fabric used as roof covering on hardtops and convertibles. It was popular from the 1960s to the 1980s on luxury cars though its use has decreased in recent years. On hardtop vehicles a fabric is placed below the Everflex material to add definition and make the car look more like a genuine convertible. The Everflex is then glued down and screwed in around doors and windows. Rolls-Royce, Bentley and Jaguar were the main users. It was particularly popular on the Rolls-Royce Silver Shadow in the early 1970s. Everflex was used for the hood bags on the very early cars after USA owner complaints of the Twillfast material fading in the sun and later used for the hood material on export cars for the same reason. It became standard on the S2 and S3. It was originally manufactured by Bernard Wardle (Everflex) Ltd and is still manufactured by Wardle Storey.

Ambla is is the registered trademark of a vinyl material backed onto a knitted cotton or synthetic and available in a range of colours. The knitted backing means that vinyl stretches in multiple directions allowing more intricate trim profiles. It was originally an ICI product but now made by Wardle Storey under the trade name ‘Ambla’. Used on the gear lever gaiter of the later S1 4.2 cars.

Vynide is the registered trademark of a vinyl bonded to a woven cotton back and is used to trim door panels and other parts of classic car trims. It is less stretchy than Ambla or vinyl on its own. It was originally a Bernard Wardle (Everflex) Ltd product and continues to be supplied by Wardle Storey

Rexine is the registered trademark of an artificial leather fabric (leathercloth) produced in the UK by ‘British Leather Cloth Manufacturing Co Ltd’ who were later renamed ‘Rexine Ltd’ of Hyde, near Manchester. It was made of cloth surfaced with a mixture of cellulose nitrate, camphor oil, pigment and alcohol embossed with engraved steel rollers to imitate the grain pattern of a leather. Used as a bookbinding material and upholstery covering Rexine was also widely used in trimming and upholstering the interiors of motor vehicles produced by British car manufacturers beginning in the 1920s and cost about a quarter that of leather. It was used by the British Motor Corporation in the 1960s and 70s, particularly as a covering for ‘crash padding’ on dashboards and doors. It was used to trim the doors and other visible trim areas along with the dash top.

Moquette is derived from the French word for carpet, is a type of woven pile fabric in which cut or uncut threads form a short dense loop pile. As well as giving it a distinctive velvet like feel the pile construction is particularly durable and ideally suited to applications such as public transport. The upright fibres form a flexible non-rigid surface which is constantly displaced to give durability and anti-stain benefits. Traditional moquette fabrics are made from a wool/nylon face with an interwoven cotton backing. By the mid 1960s there were two suppliers, one of which was Courtaulds. Moquette is used in some car seating and overcomplicated areas that are not suitable for carpet. Moquette is used on the E-Type seat and other areas.

Furflex is a woven wool pile, created from moquette, formed around a rubber tube and used to provide a high quality finish to the inner door edges. Used on the E-Type on the inside of the door windows.

Felt is a textile that is produced by matting, condensing and pressing fibres together and used to damp the vibrations between interior panels. One of the major suppliers to the British automotive industry was S&J Walsh (Felts) Ltd and used extensively in the E-Type (usually with a rubberised backing) for sound insulation and holding the Shelley jack in place.

Carpets used by Jaguar were 80% wool 20% nylon mix and the backing was dipped in rubber. Wilton 100% wool carpets were not used by Jaguar or indeed Rolls Royce despite the claims of many companies. I have yet to figure out who supplied carpet to Jaguar.

Mohair is a silk-like fabric or yarn made from the hair of the Angora goat. Both durable and resilient, mohair is notable for its high lustre, sheen and cost! It has nothing to do with the hood material used on an E-Type which is typically made from fine polyester yarn and cotton with a synthetic rubber interply. The term “Mohair” has become more like a brand name over the years. True Mohair, which used to be made from Goats hair, hasn’t actually been produced for many, many years. Most manufacturers offering “Mohair” actually produce the hoods using Twillfast which is a very close and modern representation of the original “Mohair” fabric.

Dunlopillo is a foam latex created in 1929 by Mr. EA Murphy and his team in the corner of the Fort Dunlop building in Birmingham. It was used for the seat cushions on the E-Type.

Not all statements made are correct…

Or as I have said: “Always helpful, often right”.

we call them ”horror handles”.

Note that the original thread has been dead for a year. That said, I sense @Divine_Upholstery is trying to get up to speed. James, welcome and just remember there are no stupid questions, just stupid answers

And that you can take anything Heuer says as gospel!

Yeah forums always lost me. Currently on looking for a leather supplier for the s3 seats with perforated inners. Any answers?

Currently looking for a leather supplier for the s3 seats with perforated inners. Any answers?

At OSJI, you can be assured of the quality of the interior kit or part you order from us due to our 75 years of combined experience in handcrafting Jaguar interiors. Our friendly and knowledgeable sales staff is here to assist you with every detail...

I got my S2 seats from BAS UK and the pattern looked spot-on to me.

Note that this is the supplier in the UK, not the BAS in the US and Canada (that’s a completely different outfit).

It may seem extreme to order from the UK but their prices were good, quality excellent and they shipped DHL Air so once the order was filled I had in a couple of days.

You may also find the current exchange rate is attractive.

X2 on BAS UK. Its been a few years now and the quality and fit are tops.