How to Disassemble the Brake Master Cylinder

I intended to spend Saturday morning disassembling the Tandem Master Brake Cylinder. However, I was stopped before I started with a problem.

For purposes of this discussion, I am referring to figure 14 from page L. 15 (page 333) of the official Jaguar Service Manual. The part numbers I reference below are from that drawing which I have included with this post.

I removed the Master cylinder from the car and removed the Cover (5), Tipping Valve (2) and Tipping Valve Nut (3). My intention today was to remove all of the moving parts (8-18) by removing the Gland Seal (8). I assumed it was a rubber gasket, and once removed, parts 9-18 would slide out. But on close examination, it seems that the Gland Seal is steel, which I guess is held in place by friction?

I am uncertain how to proceed. 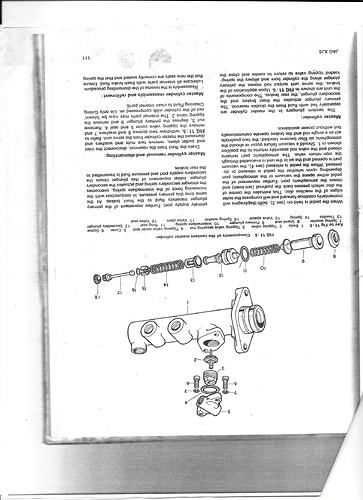 From the text you remove 3 thru 7, then depress 9 to remove 2 and blow out the whole assembly 8-18 including the gland seal? Which could still be hardened old rubber.
You have 2 out so the whole assembly must be blown out unless the text is mistaken. Is 8 in your way? Can you look up a part number to find what it is made of? If you can get it I‘d just remove it without worrying about damage to that part, and as a seal it should be rubber and by now a bit harder than new?

But on close examination, it seems that the Gland Seal is steel, which I guess is held in place by friction?

the gland seal should be rubber, and part of the overhaul kit ?

Do you have the overhaul kit on hand to check ?

I have overhauled a few of these early XJ MC, and dismantled others, and sometimes things dont want to come apart or go back together easily, but they always did

If the gland seal is blocking the pistons, it has to come out.

I just cant remember here, some MC have a steel C-clip as well, as I mentioned earlier.
work on various makes & models which can be confusing

However, in the case of a rubber seal part 8, it would need to be pryed out with a sharp pick or hook tool, so that the pistons can come out unimpeded.

my memory is clear that the MC should be rapped firmly on hard timber and all the internals will come out at once, I have never needed compressed air

i would suggest compressed air with fingers and thumb over existing hole.

just make sure the opening is facing away, and you have a box or bucket it can land in

i would suggest compressed air with fingers and thumb over existing hole.

Take a hydraulic fitting tube nut and thread a grease zerk into the hole.

It’s messier if you use grease to push stuck bits out of a hydraulic assembly, but the bits are a LOT easier to find after they’re apart.

I prefill the void with water before I fit the grease fitting, and add bleeder fittings to the other ports - this helps me bleed the air out while filling with grease, and it reduces the amount of grease needed, which also speeds cleanup.

Never thought to prefill with water and then use the grease gun, I just went straight to the gun

I am happy to report that I was able to get the primary plunger and intermediate spring out by using some oil as a lubricant. If I do use this body again, I will certainly thoroughly clean the parts and chamber with solvent to remove any oil residue. It turns out that the Glad Seal had broken some time in the past and had moved behind the primary plunger when it should be in front.

However, the secondary plunger, spring and valve stem are stuck at the back of the body. So I have decided to try something radical…use compressed air. Don’t know where I got that idea.

I am off to the garage.

It turns out that the Glad Seal had broken some time in the past and had moved behind the primary plunger when it should be in front.

However, the secondary plunger, spring and valve stem are stuck at the back of the body. So I have decided to try something radical…use compressed air. Don’t know where I got that idea

the seal will probably be “gluey”, jamming the secondary,as your glad seal was bad.

imo, its really important to change especially brake master seals as a routine maintenance item, every say 20yrs?..if they fully fail in situ, your brake pedal will go to the floor…it may respond to pumping, as it did in my case (S1 XJ)…or not, in the case of another owner I know off, whose car was subsequently a write-off

Is anyone aware of such a list? It would be interesting project to build a list of both items and their frequency.

In this case, like brake seals, it’s a matter of age, affecting all cars equally - and modern cars are no less susceptible to aging.

Two schools of thought; tackle problems as they arise, there are usually adequate warnings - or indeed, change parts precautionary. A list of those would be interesting, but I have found no rhyme or reason for things breaking down or some specific age for doing so…?

In my years of driving; original seems to last forever - replacements are sometimes short lived…

In my years of driving; original seems to last forever - replacements are sometimes short lived…

yes, that is a big issue, OEM last a long time, but not forever, aftermarket Chinese rubber is often poor quality. I have replaced entire brake master cylinders on a couple of later model vehicles after about 20yrs

its pretty interesting to take the brake cylinders apart, the amount of grit & scum, its amazing the seal isnt cut, a good clean, and they can go back in…I did that with my fronts temporarily, till i got around to overhauling the 420G unique front brakes with all parts ready, which I have only just got recently, but that was probably a few years back now

in many aspects you are certainly right: even after the automobile had gone through napkins and adolescence the general attitude of the car-driving public was different. My parents did not complain about two oil changes a year combined with different service works like winter filters etc. They compained about the excessive use of mufflers on their Beetles though - one each year, at times. After 6 years a car survived technical inspection only upon serious welding and engines were considered robust if they regularly ran into 6-digit mileages without major work. My Spitfire’s (1980) OM still advises to check and adjust valve play after extended high speed runs and clarifies that this applies to more than 3 minutes of running at +5000 RPM.

Today we expect serious cars to need nothing until 10 years old and 200.000 km on the clock, and until then only regular services occurring only every other year. So yes, cars and components have become a lot more reliable and enduring.

OTOH, as Frank stated: most of our30±year-old cars have been treated to extensive body work and rust-proofed better than new, they don’t have to live by the street side any more and I guess there is no one on this list driving one single series Jag more than 15.000 miles a year. So, typical wear and tear isn’t really a key issue. You have to change the oil every other year and the brake fluid every three years and the antifreeze every 5-10 years because old liquids are bad even in little-used cars.

That rubber parts, seals, bushing wear at that age is not surprising. Time will tell whether modern leather and interior plastic will stand the teeth of time better than our cars. Many of the problems addressed - in particular with respect to brake cylinders - might rather be attributable to a lack of use over the full operation range …