How to feed the clock

I ve a rev counter with the small clock.
How do a feed it with the indication on the casing below : 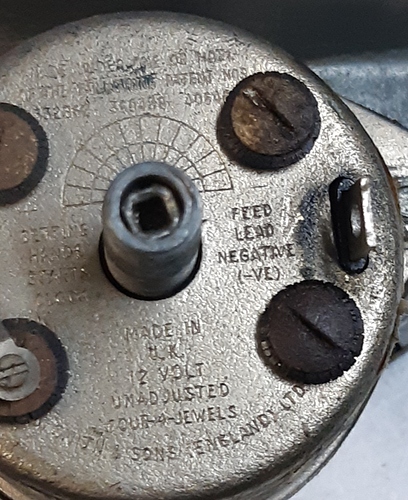 Looks like you need a small ring terminal and small nut and bolt.

You have a positive ground clock. As Robin_O_Connor states, this needs a negative spade connector attached to the “feed” lead. The correct connector has a small screw hole, and it screws in place. Also, there is a rubber insulating tube that pulls over the top to protect from shorts. The left bottom screw in your photo grounds the case to the positive side of the circuit.

Important question: did you clean and rebuild the clock with any modern components? The gold contacts in these clocks were good for a couple of years at best. Clocks4Classics sells a PCB conversion for the contacts mechanism. It’s worth the time to do this now, while you have the clock out of the tach.

Thank you guys for your messages. My concerned is now to plug it on the car. I ll ground the terminal with a screw through a 1A fuse. For the +12V I need to get a wire fixed to the left bottom screw but without the strip which connect this screw to the casing.
Does it sound good to you ?

If I’m reading this correctly, you have a problem. It looks like you have a Series 3 car, which is negative ground, but a positive ground clock. If you hook up +12v to the clock case screw as indicated, the whole case will be hot. If its mounting hardware touches anything grounded, it will short.

Wait, what? I’m confused. Where is a series III mentioned anywhere? This series 1 clock won’t fit anywhere near a series III tach.

This clock is for a 1964 or earlier E-Type, Mk 2 or earlier car with a positive ground system. If you hook it up backwards, it’ll be ruined. Likely it’s non functional anyway, but don’t melt it any further by trying to get it to work in a negative ground car. Check the Clocks4Classics solution, as the workings are not polarity sensitive.

As with many of the mechanical items on our vintage Jaguars, the Smiths clocks are a true wonder of 1940s - 1960s technology. But, unfortunately, like some other Jaguar components, the clock was not reliable after only a few years of operation. Mine began its erratic timekeeping after about five years from new (1967 – 1972). It would often stop, and by readjusting the hands I could get it to work again for a time, until it finally quit for good in 1973. When disassembled, a declaration stamped …

What what? I’m confused. Where is a series III mentioned anywhere?

The OP never said what car it was from, but his profile says he has a V12. So…?

Hi
Let me clarify the topic:
Yes my car is an S3.
It uses an EFI XJS engine.
This engine uses the Marelli ignition.
2 amplifiers managed half of the V12 each. One supply the signal for the rev counter. This is why I need a 6 cyl one.
I purchased one with the clock.
But it is a positive earth…
I ve gone ahead in term of information and I m surely go with the kit proposed by clocks for classics as it allows to change from positiv to negative earth.

I’m trying to follow your logic. In that case, if you want the ignition to feed the tach signal you would need a tach from a 1967-1971 6 cylinder car that didn’t have a small generator in the back of the RH side camshaft.

A 1964 tach would actually be a voltometer, it raises and lowers according to the voltage created by that small generator. Check a Series 1 wiring diagram if my explanation seems confusing.

The tach you are looking for should not have a clock at all as in mid-1967 when the tach was changed to be driven by the ignition signal the clock was moved to the center console. -> Series 1.5 -> Series 2.

Thank you for your detailed info.
I do not use the simplest way often!

My will is to have this little clock in just for fun.
I will have 2 clocks, I will maybe use one for winter time and the second for summer…

For the tach issue, I ve used a PCBA coming from a modern 50mm tach you can purchased on ebay. This is a modification explained into the E Type magazine from August.
So, I will say that now I ve a tach adapted to my engine. I need now to update the clock and make it run.

The Clocks4Classics solution should work. Since it’s not polarity sensitive, you should be able to switch the leads. Before buying the kit, check with Mark Willows, the owner. He responds to emails quickly. Otherwise, the case will be grounded positive to your negative system and it’ll blow a fuse (obviously). 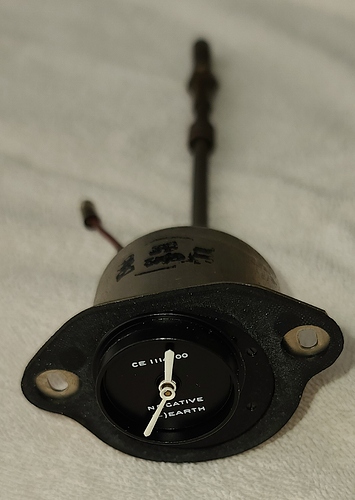