I have owned my car for half of it's age

I thought I start this topic because it’s somewhat an anniversary for me. My car was made in 3/1994. I bought it in 3/2007 when it was 13 years old and I was 29. I payed around $6,200 back then. Now in 3/2020 I can say I’m the longest owner in my car’s life. I went through a lot fixing and maintaining it. The biggest job was definitely the head gasket replacement in Sept. 2009. It had 96000 miles when the head gasket blew at cyl. #2. Right now the most important jobs would be the new sub frame bushings, engine mounts and a paint job. The transmission is not perfect but I can make it shift pretty smoothly and the diff. also needs some attention but it’s not an emergency.
The reason I still have this car is because I’m still attached to it emotionally. That was the main reason I bought an XJ40.
I wonder if there’s a person who bought an XJ40 new and still owns it.
Happy motoring everyone!

Hi Joe, A great story, I think most regulars on here will already have guessed about your emotional attachment to your car from reading your many posts, not only on all the trials you have faced and overcome, but also on the Joy of XJ40 ownership, like myself they’ll all be nodding in agreement and know exactly where you’re coming from.
I saw an XJ40 adverised with 'one owner from new and only 13000 miles - owner sadly deceased ’ last year, so up until then there was at least one person owning one from new.

I’ve owned my current XJ40 since 2011 I bought it immediately after selling my first which I bought in 2003, despite the rust it was a wrench to sell it, it was still running like a swiss watch after 180,000 miles. My current car now has 142,000 miles but no rust whatsoever, I’ve decided I’m never replacing it, I’m going to keep it until they take my licence away, I don’t think I’d enjoy driving any other car after 17 years with an XJ40.
Happy motoring Joe, that’s what it’s about !

I don’t think I’d enjoy driving any other car

There ARE other cars Casso?

Ha ha, what I meant to say is ’ driving any other car WITHOUT owning my xj40. I enjoy driving most cars actually. My VW Golf gets plenty of use, and I’ve owned the same E.Type continuously since 1978 and just about every model of Jag inbetween and most of them I enjoyed, but the XJ40 leaves them all standing when it comes to putting a smile on my face.

There ARE other cars Casso?

Larry, Casso, thanks for chiming in. I forgot to mention that the mileage was around 85000 in March 2007 when I bought the car. Sometimes I tell my friends that my car isn’t 100% mechanically but still rides pretty good. I can only imagine how well it’d ride if I replaced all the necessary mounts, bearings, bushings. I think 5000-6000 miles/year are ideal for these cars. Not too little but not too much either. 13000 miles on a nearly 30 yo car? All the rubber hoses and bushings need inspection in this case. Maybe you guys drive your car less in the winter? Down here we have 9 months of summer and 3 months of spring so the “colder” months don’t change the distance we drive.
We Jaguar owners often criticize the design of the modern cars that they all look the same but there are two I like: the Macan and the LC500. They look good inside and outside just like our cars.

The Mr’s bought the Golf New in 96, it’s used as a family car and it’s now got over 246,000 miles on and has had only 3 batteries, a power steering pump and regular maintenance in all that time, nothing else at all besides normal consumables, it gets loaded to the gunnals for camping trips, takes all the junk to the dump and is used for all the shopping and building supply trips, it never goes wrong and it sails through the annual MOT test every year, so it’s definitely a car I respect.

The 13000 miler was definitely an exception Joe. Even back in 2003 when I set out to buy my first xj40 I was struggling to find many under the 100,000 mile mark but even the lower mileage cars all had suspension bush issues, clapped out dampers etc, it’s not just usage but also time that degrades all that stuff and it seems to accelerate when the car’s left standing for long periods.

I agree Casso. The biggest enemy of these cars is sitting too much. It’s important to find the right balance between driving/enjoying our cars but not to drive them to the ground. I like to use the 303 aerospace protectant on plastic and rubber parts.

I’ve seen the 303 on you tube, does it make the black parts of the trim look black again as well as protect ? I’ve been using a product made by Turtle Wax called Extreme Nano tyre Gel, it works well for making any faded black plastic or rubber trim look good and black again without leaving any streaks or noticeable residue and the effect lasts quite a while, I found it much better than any purpose made ’ Back to Black ’ products I’ve tried in the past but my usual supplier has stopped stocking it but he does have the 303 stuff in stock.

it’s somewhat an anniversary for me.

Well alrighty then…as for anniversaries: my car is a 9/1993 build, started life as a lease car, then owned by a high school classmate of my brother. I bought it in January 2000 (20 years ago) with 75k miles on the clock. It has been my daily driver except when snow and ice are on the streets. It now has almost 191k miles and over the 20 years I’ve owned it has had: 2 head gasket replacements; new valve guides; sundry other mechanical bits (including the alternator, a/c compressor, and aircon blowers) replaced; various relays and relay modules replaced or repaired; belts, hoses, batteries, and other consumables replaced; an interior refurbishment including new leather seating, carpet, headliner, and OEM wood trim; and a year ago a strip-to-bare-metal repaint. So yes, I have purchased the car several times over. But I’m willing to bet there isn’t one amongst you that would ask ‘why would you DO that’? Being fellow Jag lovers you KNOW why!

It now has almost 191k miles and over the 20 years I’ve owned it has had: 2 head gasket replacements; new valve guides; sundry other mechanical bits (including the alternator, a/c compressor, and aircon blowers) replaced; various relays and relay modules replaced or repaired; belts, hoses, batteries, and other consumables replaced; an interior refurbishment including new leather seating, carpet, headliner, and OEM wood trim; and a year ago a strip-to-bare-metal repaint.

I bought my model 88/89 about 20 years ago when it was 10 years old. $30,000 Au. Biggest job: Top overhaul when No 5 exhaust valve blew after much overheating. Next biggest: converted power brake boost from fluid to vacuum.

Yes Mike, it makes sense to us because we understand what other non XJ40 enthusiasts fail to see. One of my friend is a Toyota/Lexus fan and every time my car develops a new problem his solution to it is a gallon of gas and a match. He drives a 2006 Highlander so for him a car is just a transport from A to B (with some tools in the back for work). I’ve never asked him but I highly doubt he ever took any of his cars (his previous car was a Sienna) for a joyride just to enjoy it.

Casso, I used Turtle wax for the bottom of the rear bench seat and ruined the leather completely. I got a new cover just haven’t installed it yet. The 303 stuff protects the rubber and plastics from the harmful uv rays. I spray both side of the tires plus the running surface then I have to wait 12 hrs. to drive my car. I rotate the wheels the same time when I treat them with 303.

I am new to XJ40 would really appreciated if you can give me some heads up. Like for example, where to order the replacement part etc… Is eBay a reliable source, or there is a delicate site that sells everything?

Any advice is welcome, thank you in advance.
Xin

Welcome to the forum Xin! Is your car a 94 model also?

Hi Xin and welcome to the XJ40 community.
Larry is right, it would be a big help to add your car’s model year, trim and your location. You can get more help from members with the same car.
I personally bought a bunch of parts from ebay. Some after market but I also bought OEM stuff like the front lower control arm bushings (since they require more work to replace them than the upper ones), brake pads, oil filter with drain plug washer. I use parts.jaguarlandroverclassic.com to find the OEM part number then just go to ebay to see if I can find it. If not then there are dedicated Jaguar part sites that sell new and used parts. Jagbits.com, SNG Barrat, welshent.com. Rockauto.com is also a popular site for their low price. 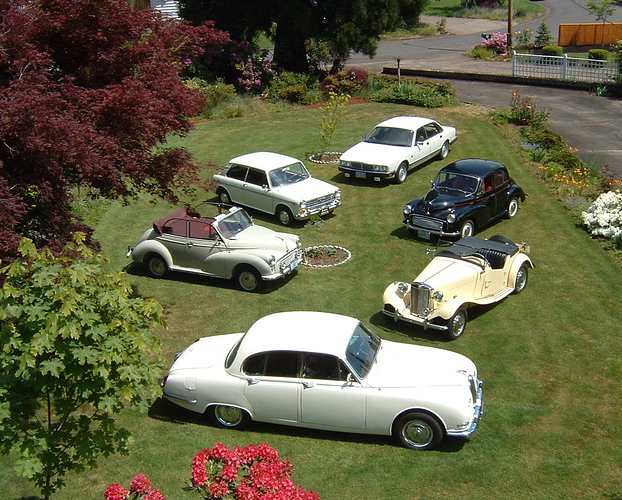 6 cars #11642×1318 426 KB
in less than 30 years. It shares a garage with two Morris Minors, one MGTD a 1965 Jaguar 3.8S and an Austin America. Being the biggest car of them all it gets less mileage than the smaller ones in my compact town of Eugene Oregon. My only current issue with the 40 is the 50 cent piece size paint bubbling from corrosion at the corners of the rear window. Fixed once, 15 years ago and it’s back. Dang. Must be a design flaw.
next page →