According to the SU needle chart. The WO2/3/4 needles are unlike most of the S series as they are 0.100 at the top which is the same as the Jet size. The S series needles all start at 0.099 at the top. The SJ needle is generally fatter ( leaner ) than all the W needles.

I’m still running WO2 needles and i think i found the sweet spot.
This is what my plugs look like now.
What do you think… too lean or ok.
New plugs after 50 miles drive.
I also use electronic ignition in the original distributor (not 123 ignition). 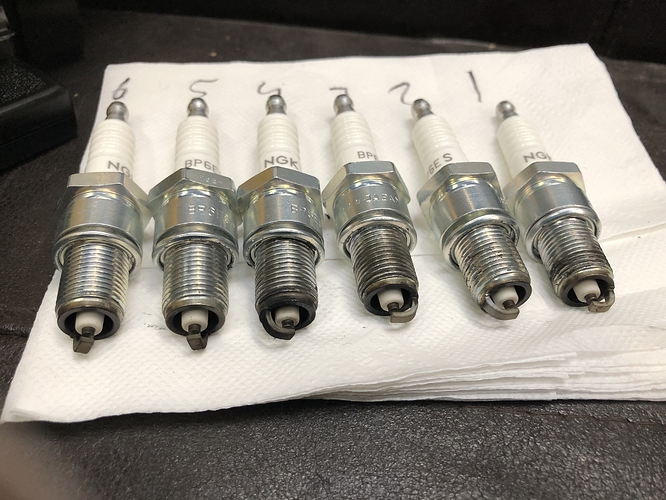 I have the same MC engine in my XK140 and am running WO2 needles successfully. I have a 123 dissy and hot coil so dropped the heat range of the plugs to NGKB7ES (yes it’s cooler), 94 octane no corn oil.

I would think 50 miles is too soon to make a real judgement and depends on whether town driving or on motorway, but plugs so far do not look too rich.

Indeed i forgot to mention the 50 miles consisted of say 10 miles motorway 10 mls town, 30 miles small roads with lots of gearchanges. (I really love driving it btw.)
I added a CO meter to the toolbox.
Will report back on vol% CO on both sides. I’m curious! 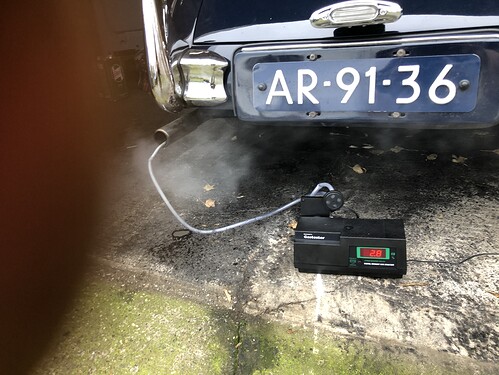 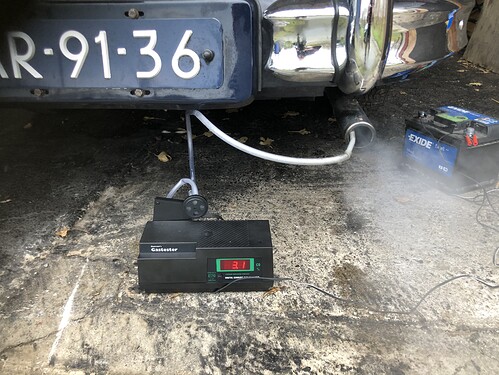 I’m running around 3% @ rpm750 rpm and WO2 needles and synchronized carbs.
Happy with the way it runs right now.

I do have some questions about timing.
I understand the way it is set. I would like to draw from your experience regarding advance at @750 rpm…
I measure around 22 deg. without vac. on the distributor.
Is that in the ballpark or are the springs of the mechanical advance too weak thus advancing it too much?

Have you considered a wideband O2 meter for mixture analysis? Possibly a bit more helpful than a CO meter. I have welded a lambda sensor bung in each of my cars’ exhaust headers, so I can use an Innovate, which is great - Every other year or so I screw in a sensor and do a check drive under all conditions, noting the λ display.

Regarding an AFR device… yes i have been thinking about that too. I’m looking at something with a log output. With a good resolution you even can determine whether the spring in your carb has the right strength.

I have my '56 MC set at 10 degrees static (crank). At 750 rpm and it reads the same on the advance light reading at the flywheel (vac disconnected), rising after 1100 rpm to follow the mechanical advance curve.
If you have set static to 10 degrees at the flywheel and disconnected the vac, your mechanical advance may be stuck or the vacuum unit stuck. What do you read at 2000 and 4000 rpm?

Thanks for sharing Bpp.
So no advance other than static at 750. That is something I can work with.

Are these the data you’re looking for? Note: these are crankshaft degrees, not distributor degrees. 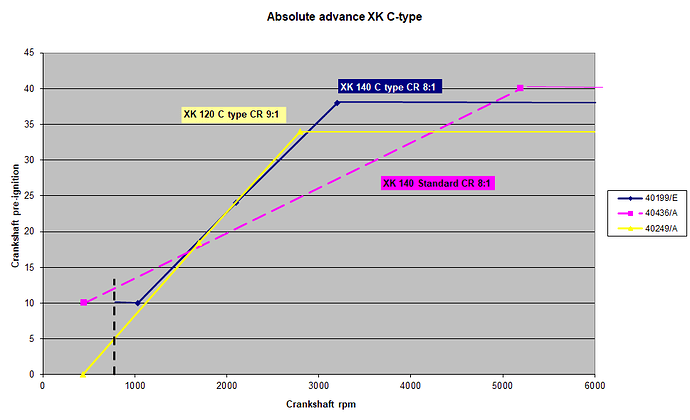 Thanks Bob, i think this is what I was looking for.

But just to be sure…you are explicit about crank degrees…this is the advance I should see at the flywheel using a timinglight?
(I can set advance on my light)…

Don’t know exactly what timing light you have but if you make some marks on the flywheel you will have a reliable method. I assume you have disconnected the vacuum advance connection when you made your readings?

Yes indeed, I disconnected the vacuum.

But… I just realized I was looking at the arrow on the flywheel, not the 10 degrees static advance point. So i made a mistake…
Will check at next opportunity!

Today I set cyl. 6 at TDC on compression stroke and checked if the arrow on the flywheel lined up with the marking…it did.
Then I made a Mark at 3,6 tooth BTDC (10 degrees) and checked with the timing light…
All is well, the mark is clearly visible, so basic timing is ok.

I have an 8:1 “C” head XK140 and am playing around with needles. I’m using an Innovate “sniffer” aka an air/fuel ratio tester.
WO2 needles are fitted and I have tuned it to be 13.5:1 at 1000 rpm (anything less is too “fluffy” and varying widely).
At both constant speed and WOT (wide open throttle) after pistons have raised it’s showing AF ratios in the 11s. Both carbs are almost identical. Far too rich. I’ve ordered some WO3s to see how they go.
The AF sniffer is invaluable and far superior to “lifting the piston” or a Gunson Colourtune.
The online program at http://www.mintylamb.co.uk/suneedle/ allows any 3 SU needles to be compared. It shows the “annulus” ie the area of jet exposed with the needle at its 12 different “stations”. Invaluable for working out what needle to use for different mixtures at different speeds.

Out of interest, how are you setup with the Innovate?
I have found that on cars with twin pipes but no balance pipe (mine was an original Cobra 289), using the probe in the exhaust tailpipe gave unreliable readings. On cars with very similar engines but with a balance pipe (my tests on a 1968 Mustang), the instrument gave very clear readings. As a result I have fitted lambda sensor bosses to the downpipes, fitting the Innovate sensor for road testing, but leaving with blanking plugs for normal driving. This gives reliable and repeatable readings. I suspect air is drawn back into the end of the pipe with no balance pipe to keep the pressure up on the opposite bank firing events, don’t know.
I’d say 13.5 AFR is OK, but a bit on the edge - I tend to set mine around 12.5:1 just to be on the safe side. That’s with large fixed-jet four-barrels, though - I have yet to use it on the SUs.

I assume you clip the probe on to each tailpipe to check mixture? Fortunately, the XK140 has two separate exhausts. Unfortunately, that’s not the case with the 120, even with the twin exhaust which share the silencer. One would have to weld on take-off bungs to each downpipe.

Yes Chris, it’s easy with one carb, one pipe. Much less use of systems where the exhaust gases all get mixed together, like with a DB5, or where there are 3 carbs exiting into 2 pipes, like a Speed 25 Alvis.
I have not been able to find the SU tool for adjusting the jets on n H6 carburettor, and a screw driver often slips out/off of the cross in the adjusting nut
I made the attached out of 2mm aluminium and put a couple of lugs on to stop it sliding out sideways. And big enough so that turning the jet is easy… 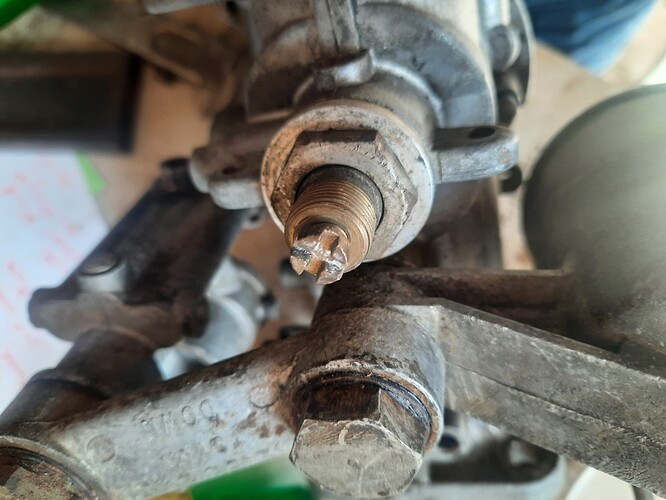 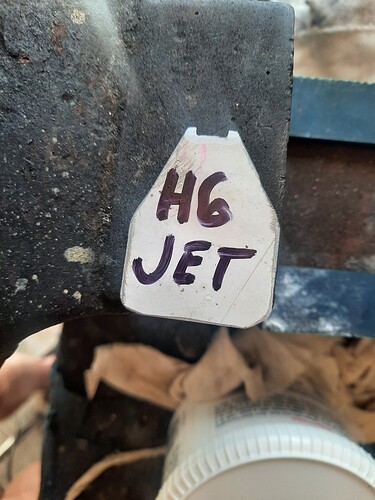 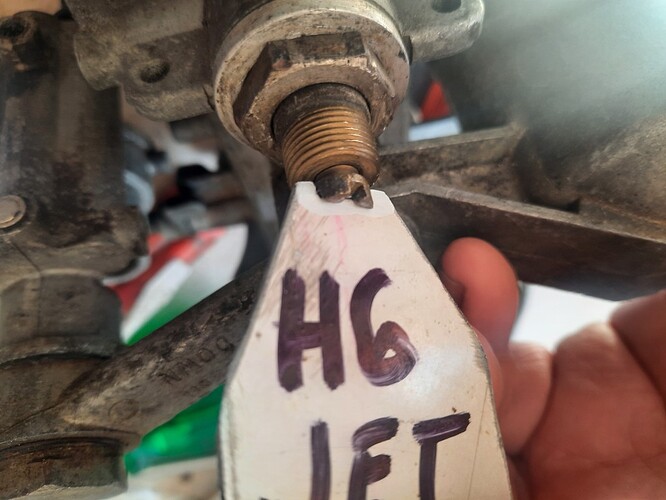